June 30, 2012
The other night, returning from our road trip, we had to pick up Christian's car from the shop in a city where we usually have no business. How about staying here for dinner?
"GREAT - we were just driving by a Burger King, can we go there?" Colin was excited. Christian had Santa Lucia in mind and challenged Colin "what do we do now, how do we decide, as we both want something different?" "We go to Burger King", Colin said, matter of factly.

"Let's ask what mommy wants". Whopper sounded fine with me, but I wanted to play along the democratic game and suggested Asian.
"But Thai food is SO SPICY!" he claimed. Right. There's still the good old sweet and sour Chinese stuff, little guy! 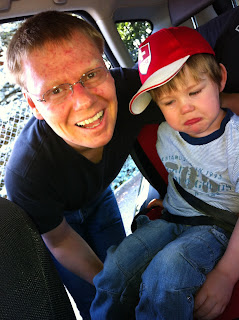 Christian suggested asking trivia questions. Know the answer, stay in the game, don't know the answer, you are out.
After several rounds of Colin asking me about ice hockey results from last seasons and player's jersey numbers and me wanting to know details about the BK menu items, we were still none the wiser on where to go to dinner.
Let's toss a coin. We explained the rules. You've got a 50% chance. We demonstrated how it works. Game? Game! Colin wants "tails" because that was the winner in the test run. No winner this time. "Once again". Still no luck.

Me, on the other hand, I kept winning. I felt bad for him because he was getting really tired and frustrated. I tapped around on my iPhone foodguide app just to realize that the Chinese restaurant I used to go with my boyfriend back then doesn't exist anymore.


"Burger King?" Colin saw his chances improving. Christian stayed firm and said there surely existed another Chinese restaurant in the area. So we drive to "Hong Kong" (with two cars - remember the reason we were in that town). Colin (whining about he'd much rather have a cheeseburger than fried rice) and I arrived first on an completely empty parking lot. How was that possible? 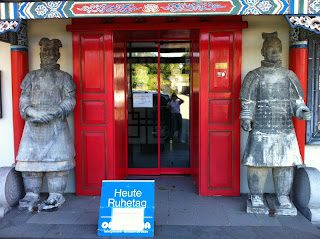 "Betriebsferien" is something I believe only happens in Switzerland. Restaurants and shops that are run by families or small teams close up in summer or at Christmastime. Hong Kong would only be back open mid-July.

"OK, mom is out, she doesn't seem to be able to locate an actual place to eat" Christian and Colin decided. They tossed more coins. Christian won. Long face.

We entered "Santa Lucia" in our navigation systems and off we drove. In two cars. More whining about how unfair it was.  The fact that he usually loves pasta and and an Italian restaurant was a 100% chance of pasta didn't cheer him up.
"You have arrived at your destination" the car lady said. WHAT? That's absolutely not the Santa Lucia we meant! Plus there were no parking spaces.

"You guys can go to BK any other day, but once we are here, let's eat at someplace NICE!" Hubby said firmly. "Plus you had two shots, so I get another one..." We found out that the one he wanted to go was now called "Trattoria" - on second thought I think it was ALWAYS called Trattoria. Never mind. Let's go there. In our two cars. I promised Colin that if this one didn't work out, we'll go to Burger King.

Another empty parking lot. Can you believe how a 4 year old's face can lit up?


It turned out they were just about to open for dinner, and we were their very first customers. Grumpy little man got out of the car and marched in. 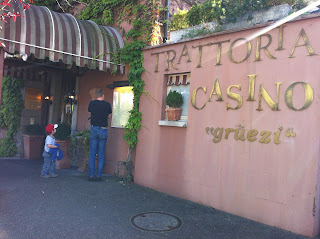 After they brought him some paper and crayons and appetizers it was fine. He actually liked his spaghetti, can you tell? 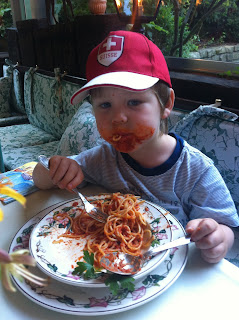 PS: a couple of days later I took Colin to Burger King which he thoroughly enjoyed. 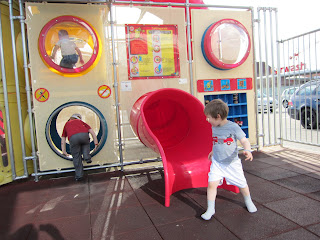 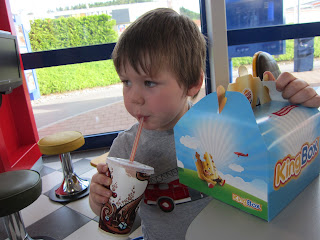