Is a hot shower an entitlement?

In the 21st century in the Western world, do you think a hot shower is as important as, let's say, a car? After an accident, insurance companies cover the costs for a replacement vehicle. I guess the reason for this is so you can still get to work. Well, I need a (hot) shower in order to get to work. Otherwise I get a warning for scruffy appearance and (even worse) grumpy behavior!

Why am I asking that? 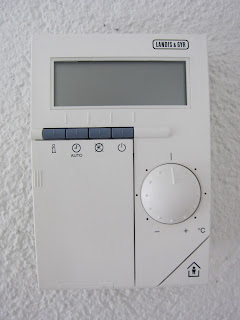 It all began on Saturday afternoon when I noticed that the display of our heating system was blank. We were just about to leave the house and thought we'd worry about it upon our return.  When we got back, everything looked fine.

Just recently, temperatures in our area have dropped from 95° to 60°, and probably our heating just didn't know how to actually do its job anymore, fair enough!

I left the house around lunch time on Sunday and came back at 3pm. Still no sign of trouble ahead. But after dinner when I wanted to empty the dryer, I stepped into a puddle in the basement. Holy crap, where did all the water come from??? The origin of this flooding seemed to be underneath some water pipe leading to (or from? What do I know?) the heating. 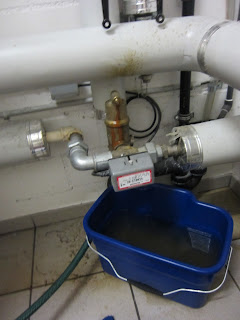 I put a bucket on the floor and called my husband. He shrugged and said "well, what do I know (isn't he the guy in the house?) you are going to have to call somebody tomorrow." Later that evening, strange noises came from our basement, and hubby turned off the heating.

Monday morning, 8:05am (because I know how much I hate to get a call at 8am sharp) I tried to call. "All our agents are busy, please hold the line. Your call is important." Right. When I finally got somebody on the phone, she said there wasn't anybody available right now, but she'd forward my request. Surprisingly just a couple of minutes later "our heating guy" who performs maintenance every year, called and said he was in the area and could be at our place in 10 - 15 minutes. I was still in PJs and I am not able to get ready in 10 - 15 minutes, so I just put on some jeans and sweater and pulled my hair to a ponytail, and soon enough the guy was here. I really like him, he is young but very professional. Says stuff like "I'll make a note of that, and next time I know what to check for" or "you should be fine - if not, you can always call me". But this time he said our problem had nothing to do with his range of expertise and I needed to call a plumber/heating guy. "I won't charge you for this" he added. See, sweet guy.

So the plumber/heating company. A former classmate of mine works there. They use to send him for clogged drainage or when the toilet tank doesn't flush anymore. I wondered if he could help me today. No he couldn't, and he was fully booked for two days straight anyway, the lady informed me. But she would make sure somebody would call me back.

Then Colin and I left the house. We had some birthday shopping to do :-) And some lunch to have as well!

On our way home I checked my mobile phone for the gazillionth time. No, they had not called, so I did. The clock was ticking, and I was not gonna take a cold shower tomorrow! Also, I couldn't go with another no shower at all. When I was transferred to a guy, I honestly thought he was a technician and asked him "are you gonna help us?" "No, I am the dispatcher" he said. He had nobody available but could send me somebody first thing in the morning. That was kind of not good enough. I didn't say that in so many words, but he got my desperation. 5 minutes later he called again, sighed and announced that he was gonna come over and have a look. He even brought spare parts. Unfortunately it was the wrong ones. Also he found out that he couldn't just screw the old one out and screw the new one in, but the whole socket fitting needed to be removed, disassembled and put back together again. "We'll have to do that tomorrow morning" he said.

That was OK. He tried. Plus I had an idea. Wasn't this some kind of water damage, covered by household insurance? They take care of the handiman's invoice, and maybe the cleaning up of the ruined stuff in the basement. What I was after was hotel accommodation. "Probably not" the girl at the broker company said. "But I'll check anyway."

Well, we could argue about who was going to pay for it later. I called one of our local hotels which turned out to be fully booked. On a Monday night? In our quaint little town? On to the next one. I got the last room available. Was there some kind of event that I didn't know about?

I texted my husband the latest news and asked if he wanted to come home first or should we pick him up at the office? He was kind of stunned. Made some weird comments like "tent" and "youth hostel". Hello? We did have a bed, but no hot shower!! 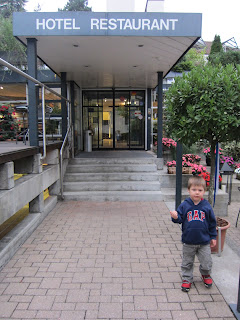 So our stay was very nice. We made sure though not to spend too much time on the wonderful breakfast buffet in order to be back at the house at 8am when the handiman would arrive. Well, he didn't. I didn't want to be pushy, but it was a work day, and I didn't want to sit at home and twiddle my thumbs, so I called. The lady knew nothing about somebody being assigned to us. The dispatcher? In a meeting. Great. I told her I was going to the office then, and would please somebody call me soon? So what is an appropriate time for returning a call? 9? 10? I called again and ooohps, the owner of the company answered the phone. Well, OK, at least he was in charge. And sure enough, it didn't take long and I got a call informing me that after 1pm Mr K would be there. And he was :-) Still working. 2:30 now. Things are looking better!

So now, my question to you: do you think the insurance company should pay for our hotel stay?