How I spent Valentine's day with three young men

February 14, 2013
Those of you who know Colin know that he is more of an ice hockey body checking guy than the sit on the table doing arts and krafts kid. However the idea of making Valentine cupcake cards for his friends intruiged him. He was all for the sprinkles and the cherry on top and made a mental list of just about all the kids he knows who were going to get a card. 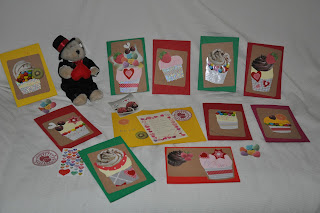 Also he totally wanted some chocolate covered strawberry love bugs. Not the one that says I love you. The other one. He found it way cool and repeated it for about an hour. Love stinks, hahaha, love stinks, hihihi,... 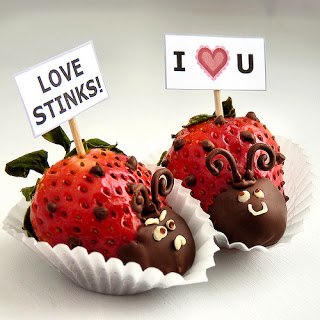 So with having a little boy interested in a romantic holiday I wanted to make it a good one and prepared a Valentine Scavenger Hunt for him. Being an only child is no fun for activities like this one, though. And with ski weeks over, his girlfriends are back to Kindergarten and school (yes, he is into older women), and his best male friends are at daycare on Thursdays. But a few text messages later it was arranged; we were allowed to pick them up and take them home.

Some of the tasks needed to be completed at the supermarket. However there was no way I was gonna take three boys groceries shopping, so we did this part just the two of us in the morning. He got the following instructions: 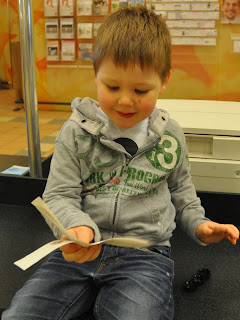 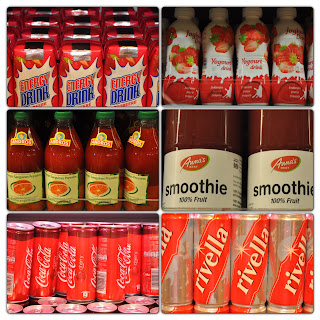 The same applied to what chocolates have a red packaging? We live in the land of cheese and chocolate after all! 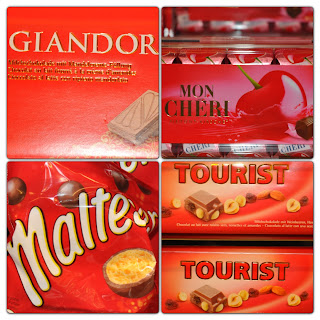 Oh, but the other tasks turned out to be extremely hard: take a picture of people kissing. Obviously there is no kissing going on at the market! Also there weren't any girls in pink dresses that he was supposed to spot. He got really desperate and pointed to an elderly lady who was wearing a purple jacket. "Does this count?"

After lunch he couldn't wait until it was time to go and get his friends; he was really excited about his Valentine party. And so were they. However, as soon as we got home they ran and got some toys. "There goes my Scavenger Hunt" I said to myself. But hey, with their mom working 4 days a week and having her only day off on Fridays which is one of my work days, they don't get together much for play dates. 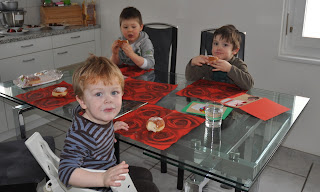 "So when are we going to play this Valentines game?" Eric asked to my surprise after a snack.

It was an interrupted snack, by the way. After finally everybody had washed their hands and sat down to bite into a jam filled donut covered with confectioner's sugar, Vincent said "gotta pee". Right.

"What do you know about Valentine's day?" I asked Eric who is 4.5 years old. "It's about people telling each other I love you." And won't you ever forget that! I have heard of men who say Valentine is a way for Hallmark and florists to make money.

So I sat them down and let them draw the instruction notes: 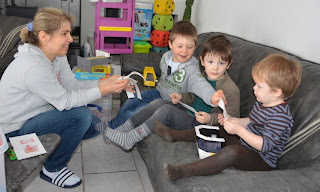 Make a flower of whatever you can think of. "There are no flowers in here!" Boys, use your imagination! How about using Legos? 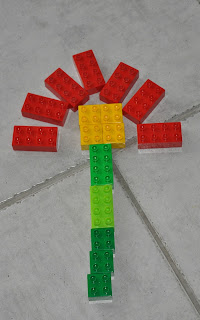 Tell me what red veggies, fruit and berries you know! Colin was very quick: raspberries, strawberries, apples, .... he wouldn't stop. When he finally did, Eric, very calmly, said "chili". That was awesome! I wanted Vincent to contribute as well, and he - looking all serious - told me "flowers". Ahem. You guys eat red flowers for lunch? "Yeah, but only when they were frozen." I have to find out about that!

Call somebody and tell them you love them. They chose their grandparents. Turned out they were really worried if something happened and if they needed to pick the boys up. "No, it's just a Valentine game, grandma!" 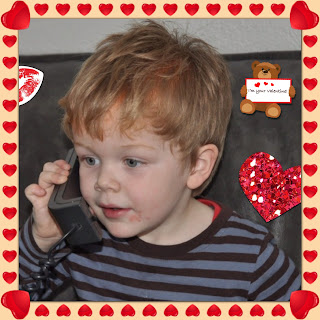 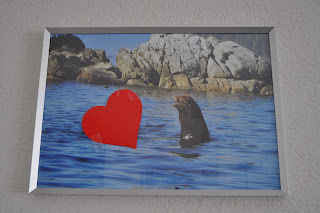 At this point I could tell they were tired and getting cranky. Still about an hour till they were supposed to get picked up by their dad. What to do? Now this may not be the smartest move pedagogically but I had a Christmas gift stored in the basement that I had withheld because Colin got so much stuff already. Today it seemed like an appropriate gift, and man, did they rip it open quickly! 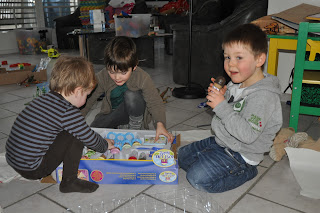 For the remaining time they played ice cream shop and scooped and sprinkled very peacefully. Which gave me an opportunity to do some cutting and mashing myself to prepare for our dinner: 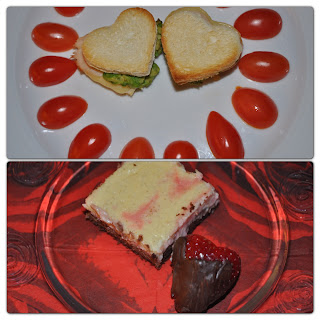