We heard about it through Andy, a friend who used to be a coworker of mine in another lifetime. He is in charge of the hockey youngsters, and we usually attend the skateathon which is being organized for fundraising.

So we were told that even if he can't skate, Colin is welcome to join Hockey School as soon as he turns 5. 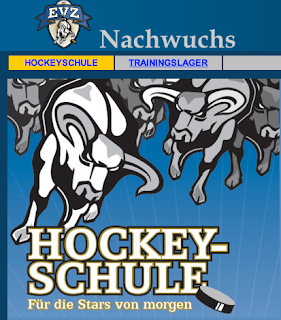 We arrived at Bossard Arena in time - or that's what we thought. Paying entrance fee, renting ice skates, all went very well. Until we arrived in the hallway leading to the locker rooms. A loooong line of parents, both nice and pushy ones. Kids, some already dressed, others in street clothes. It was raining outside, so everyone had wet jackets, umbrellas and bulky hockey bags. Sauna, anyone?
Most people seemed to be there for the first time, too, so they didn't know how this was all going to go down, either. When we finally arrived at the desk, we found out that this was the place to register - yes, fill in a piece of paper! Why on earth didn't they put it on the website for people to download and fill in at home? - and pay for the jersey. Then we had to get in another line in order to get a helmet and gloves. I asked if that would be our equipment until the end of the season. The lady, clearly annoyed by the many ignorant people was like "OF COURSE, do you think I want to come back here EVERY WEEK for this?"

We were now officially late. Half of the training hour was already over until we even started to put the gear on.

There must have been almost 100 kids, and we were among the last ones to get onto the ice. As I mentioned, Colin's skating skills are on a beginner level, and the appropriate description for how he gets places would be "ice stalking".

After a couple of minutes of struggeling to get to his group, a tutor picked him up and pushed him gently:
From time to time someone blew the whistle so the kids knew they had to pay attention. The groups alternated to different areas where they had to jump over sticks laying on the ice or try and score the puck into a mini goal.

Although he noticed that the other kids skated much better than him, he seemed happy. At least he never cried. Other kids kept coming to the "parents bench" and complaining about others shoving them or that they just plain fell. 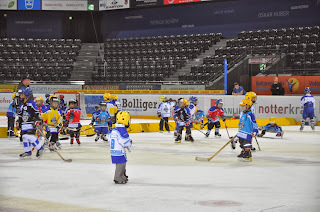 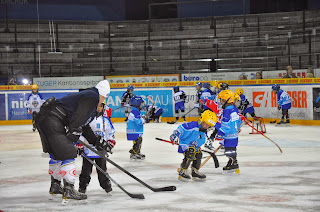 It was very interesting to see how many non-Swiss parents encourage their children to play ice hockey.

Let me rephrase that:

The average Swiss boy plays soccer. It was interesting to see so many expats in one place.

Zug, the city we were at, is known for its international companies (Johnson & Johnson, Glencore, Hugo Boss, Adidas, BP, Shell, Siemens, Kellogg's, Barilla, Ferrero, Mars, just to name a few), and I must know because I have worked for one of them in the above mentioned other lifetime. 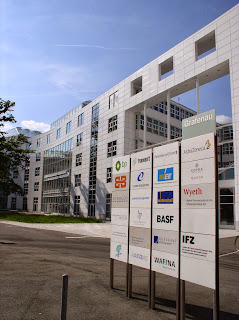 As a matter of fact for a period of almost 10 years, I, and later, we attended the yearly fun hockey tournament!
Anyway, I was thrilled to hear lots of English and Scandinavian speaking people. I asked one of the dads where they were from. If I would have had to guess I'd say it wasn't Swedish. "Finland", he said. Aha. Not much later I heard that same phoneme from another family. "Finnish?" I asked, and they replied something I didn't understand. I didn't because they were speaking Finnish, haha.

One little guy, Felix, kept coming to see his mom and big brother. She told him to get back on the ice until time was up, and then they would go home for some meatball dinner. Now he was afraid he was going to miss his meatballs, and he climbed over the ring fence again - just as the other kids were starting a race.

Then there was the whistle again, and the coach must have asked something. The kids screamed YEEEEEAAAH twice and then stormed to the exit.

100 little hockey players - everyone trying to get to the locker room first. 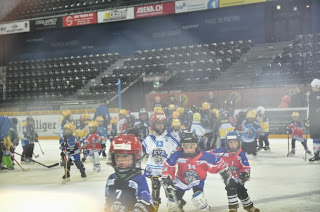 Turned out he asked "did you like it tonight?" and "are you gonna be back next week?" 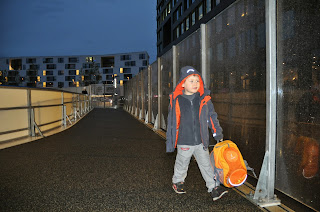 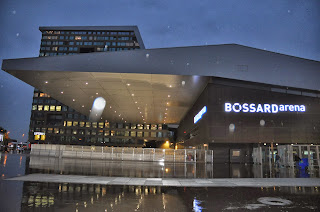 Colin did like it and he does want to go back next week. So I will be hockey mom / mama taxi for the next 5 months. It is a 50 minutes' drive with very few freeway miles and lots of countryside highways, through villages and along fields. It used to be my commute to work, now it may be his commute to work - after all he does want to end up with a NHL team ;-)

From the ice rink this is Colin's mommy saying "thanks for reading and see you next time!"