November 10, 2013
This week Kindergartners, 1st and 2nd graders carved their *traditional turnip, walked through the village and held a concert. 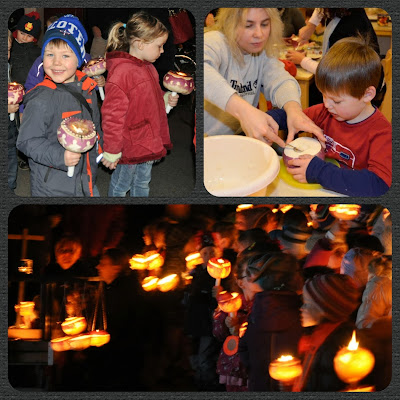 Let me try and translate the lyrics of my favorite song; I thought it was just lovely:

After the performance the kids got a well deserved snack: 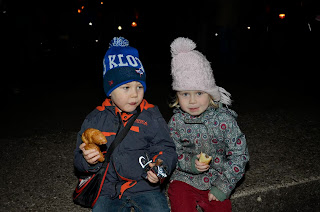 A couple of weeks ago I followed a heated discussion on pro's and con's about Halloween in Switzerland. Some thought it is total treason if you are Swiss and indulge in some pumpkin decorating and trick or treating. 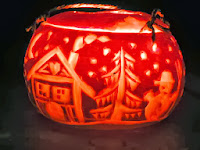 "Harassing the neighbors by begging for sweets is a total no-no, our family will turn off the lights and the bell and absolutely not open the door. We will not be part of the American nonsense that is trying to eliminate our own festivities such as *Räbeliechtliumzug, **Jodlerchränzli or ***Alpaufzug!"

"You conservative ignorants have no idea that Halloween is originally a European custom, and why don't you grant your kids this special night, going out in the dark with their friends and come home with a bucket full of yummies!"

On and on they went. Monetization by selling costumes and decoration (what decoration? I couldn't even seem to find simple napkins!??) Celtic vs Christian, apples are the better food options for the kids than M&Ms, pizza is Italian, no, pizza is American, why do they start with Christmas stuff in September, if commercialism is bad we should immediately do away with mother's day and Valentines…

I think in the end everybody wanted to have a say in just about anything! 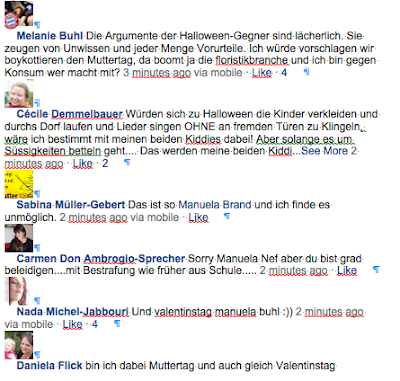 I copied everything into a word file (26 pages!!), and whenever I need something to laugh, I will take an hour or two and read through it and be happy that I can celebrate just about any party I like!

*Turnip parade, you know all about it now ;-)
**Don't get me started; I have no idea what that is. My guess is a yodel meeting.
***Ascent to the mountains at springtime, when cows are driven to higher pasture. 6 months later they will descent back to the village, which is then called Alpabzug. I have never witnessed one myself, but I hear they still exist!