April 26, 2014
I'm actually going to tell you about two days in the life of a part-time working Mom. A Mom who likes to be prepared, efficient and on top of things. Especially on office days.
Both days happened this week, and both involved a code brown. It's not what you think. At least not entirely. Bear with me.

Of course I had to wake Colin. He only gets up at 6am on Sundays. We were about to take a shower when hubs came to the bathroom. His PJ pants had brown stains all over. If it hadn't been him, being a grown-up and all, I'd have thought, you know… Turns out they were chocolate stains. From a chocolate egg that someone took to bed and forgot about it. He had the cockiness to ask who it was, when it was kind of obvious that neither, Colin or I, would bring chocolate and not eat it.

Then C remembered that he was supposed to do some homework! We are not used to homework yet, and we couldn't find his booklet. A frantic search produced it, and he winged his assignments in the 10 minutes he had left before leaving the house. It's a good thing that kid can read and doesn't need help with the instructions.
Even though doing homework at the last minute is not the standard procedure I want to have in place, I was pretty proud of him! 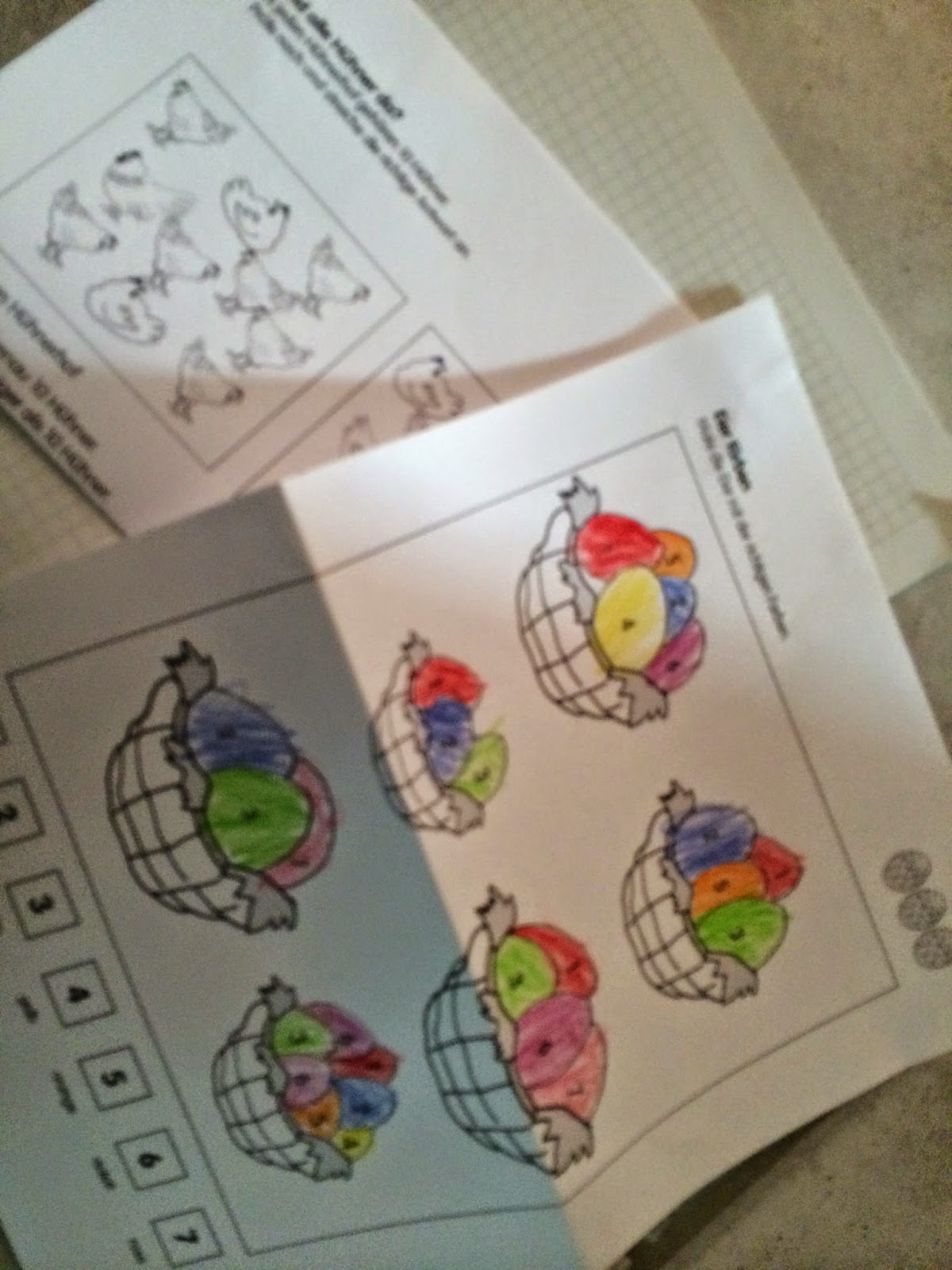 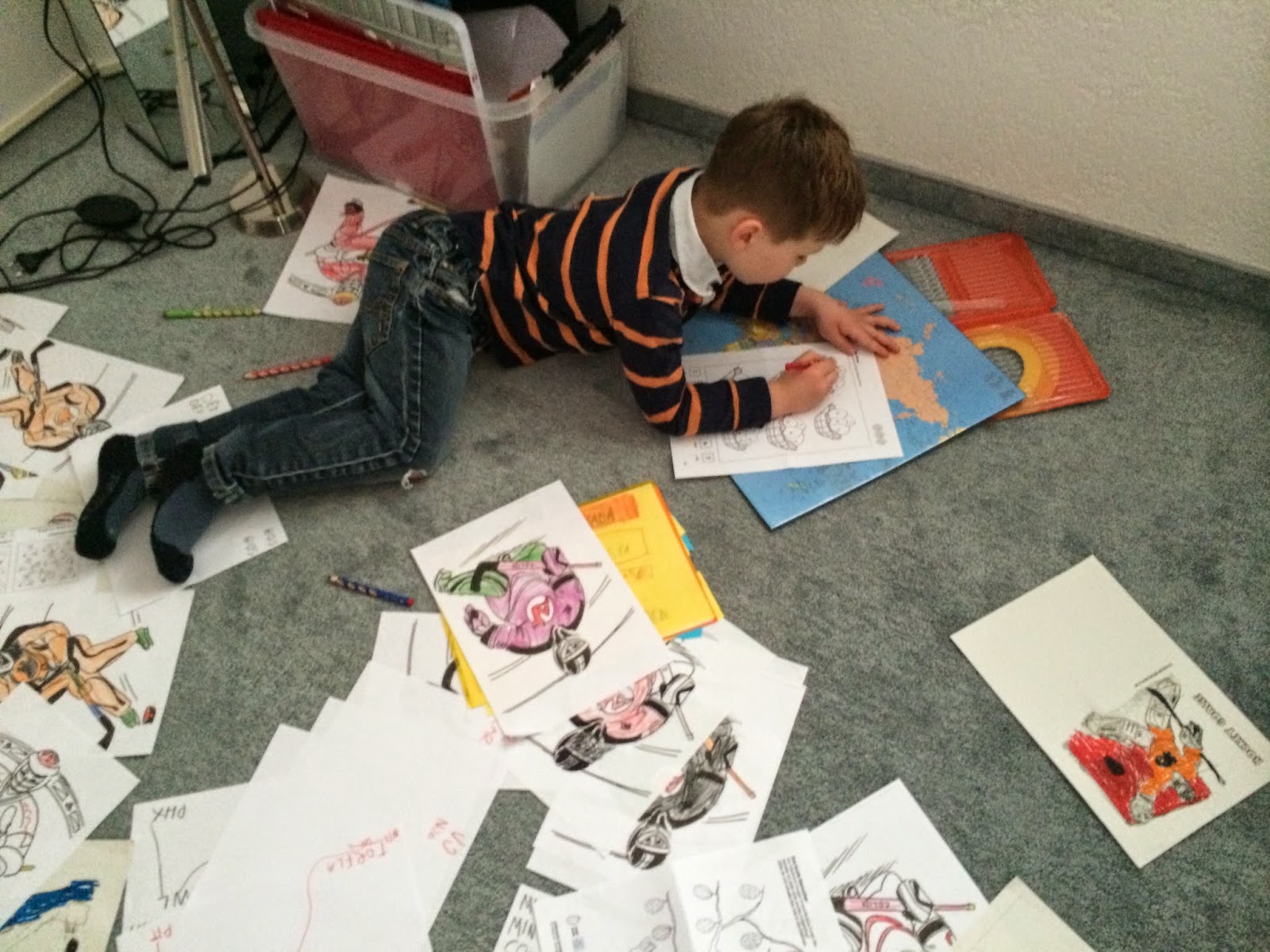 So instead of preparing food to put in the oven so it could cook while I was at work, I was running back and forth between the bedroom and the basement where our laundry room is, stripping down not only the sheets but also the bedding.

By the time I was finished, I was sweating like a pig and had to put on new clothes. 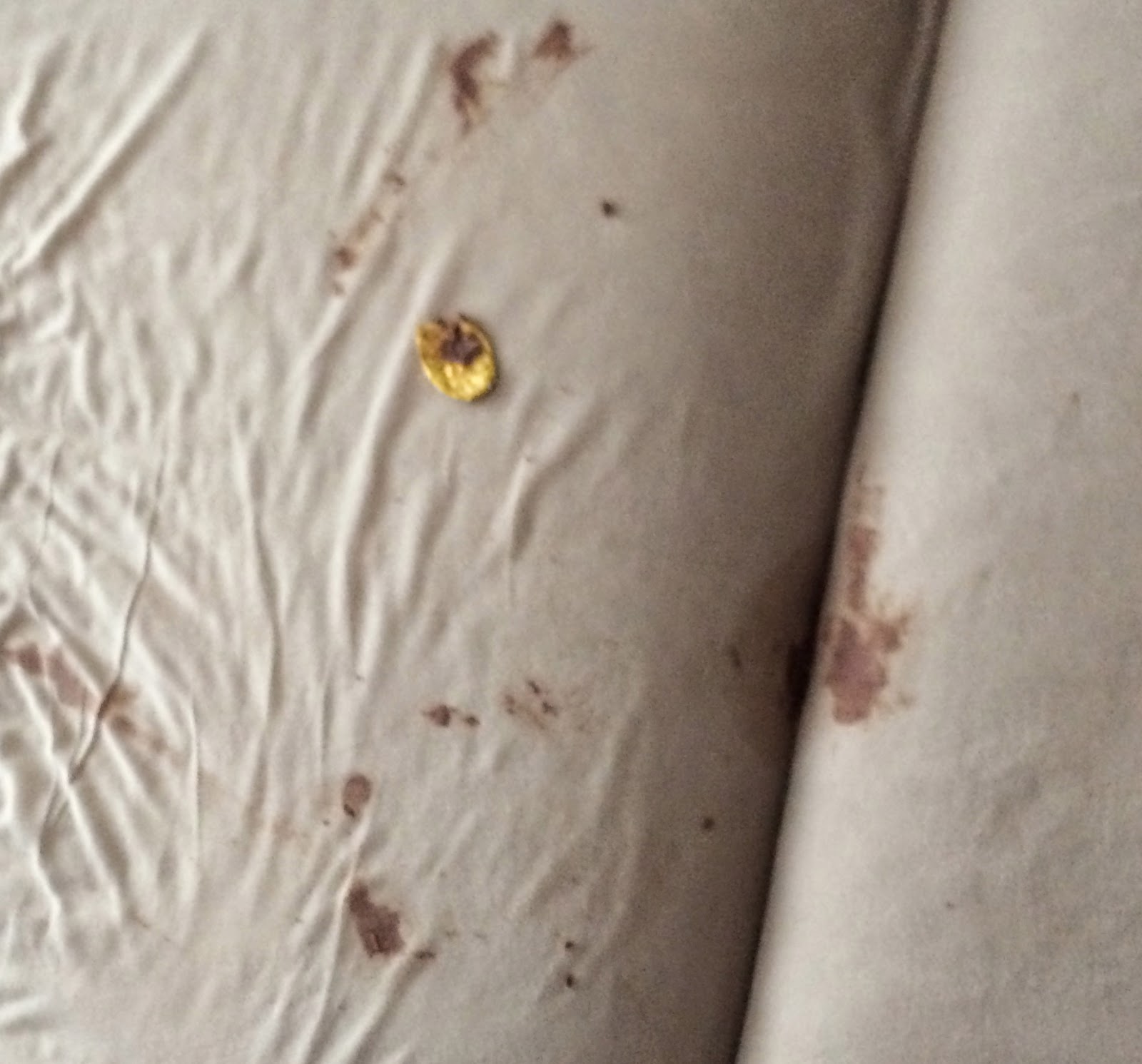 At the office, the internet was down for a full two hours, due to maintenance. It had been announced to be down for a 45 minutes' time window between 8 and 12. It's kind of hard to work in IT without being able to do remote support. As for me, I was desperate to get on Facebook to my FBUA meeting. Or at least to post about my morning.

During lunch hour I went shopping, went home, started to reheat some leftover pizza, stocked the fridge, put the freshly laundered bedding in the dryer, started a new load of laundry, peeled the carrots and potatoes, put them in the steamer and was ready to race back to the office just in time. Oh wait! The pizza! I had to actually eat it!

Wednesday and Thursday I just went to the Brazilian rainforest and the dentist's. 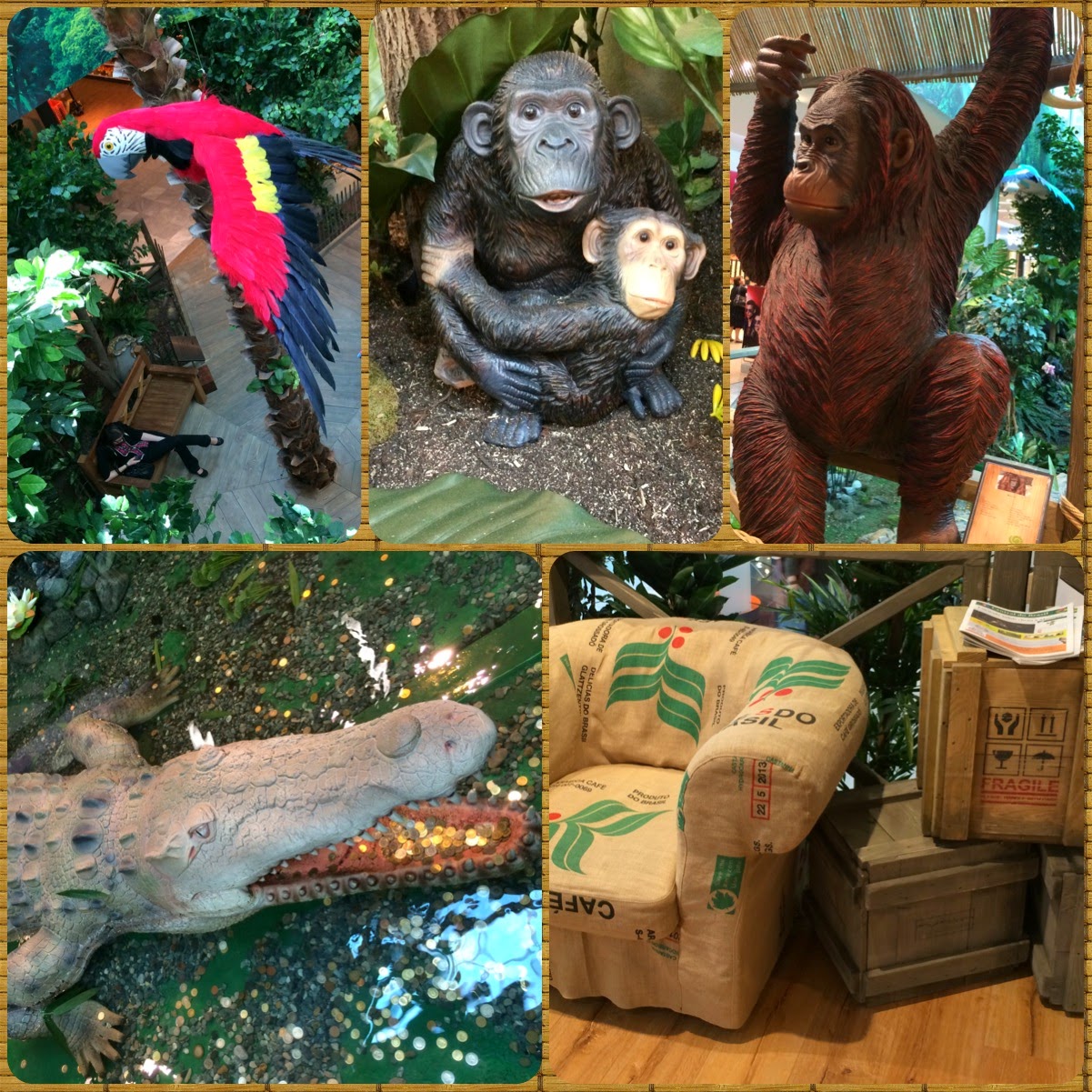 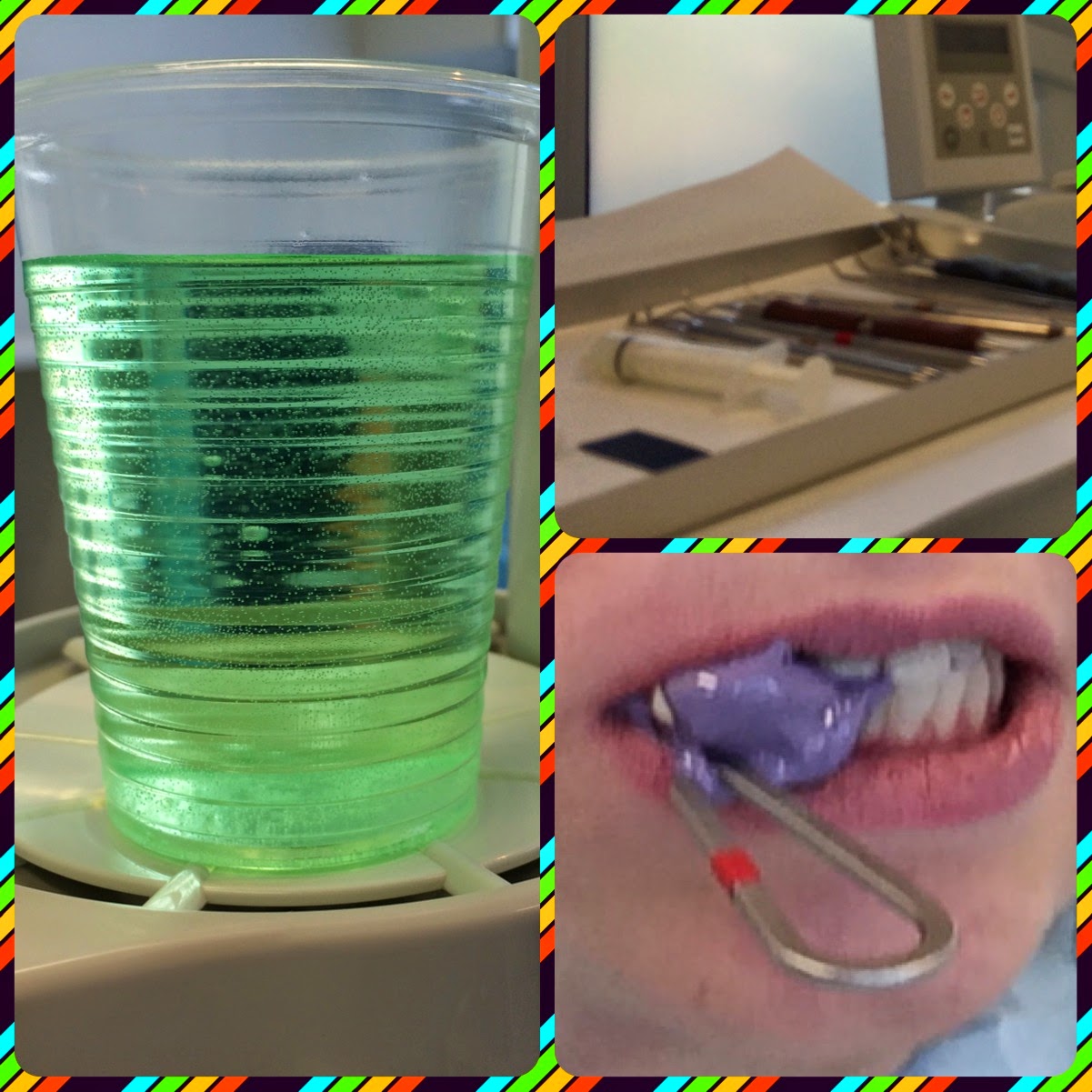 So they were pretty quiet. This should have made me suspicious.

On Friday morning Colin didn't finish his breakfast. He said his tummy hurt and he wanted to play hooky. Huh? Which one, now? But then he went on making jokes, running off instead of to the bathroom, being his usual cheerful self, so we sent him to school and said if he was feeling sick he should have the teacher call me and I would come and pick him up. 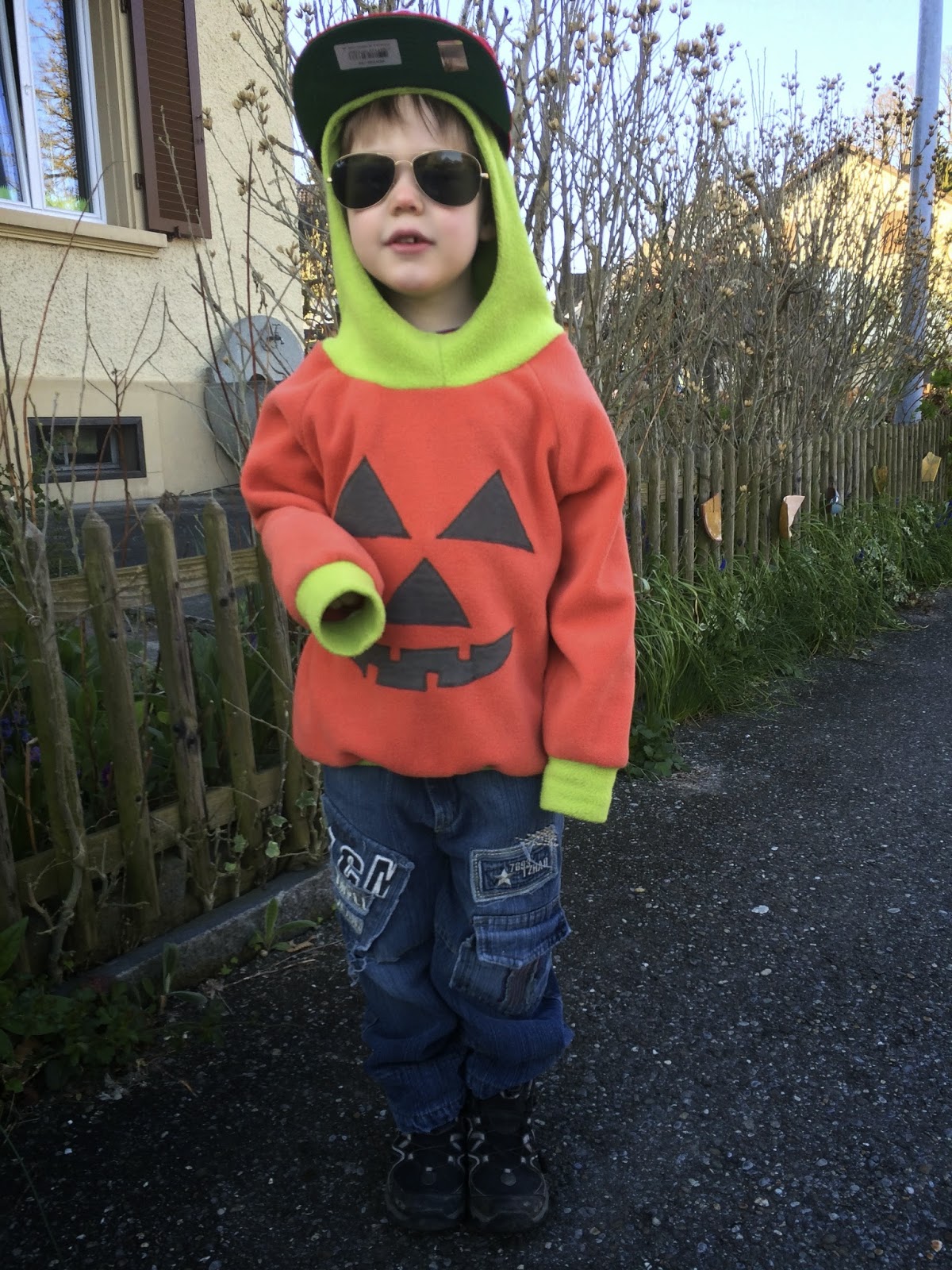 Every other Friday they spend the morning walking to the nearby forest and play there. I kind of expected to be getting a call and having to go to "right by the tall spruce" or "the place we once saw a squirrel", but apart from the hockey app that sent me the final result of the SJS : LAK game, my phone remained pretty much silent.

Lunch hour was just about here, when I heard someone coming through the office door. Don't you just love walk-ins who won't respect the fact that food is now a priority?

It was Colin, fully equipped with backpack, sweater, fluorescent thingie (young kids wear them to be better visible on sidewalks. I don't know how to call them in English), cap; - he even brought the plastic bag with a 1'2 tall stuffed animal Forfo that he was supposed to take to Sunday Friday School later this afternoon. 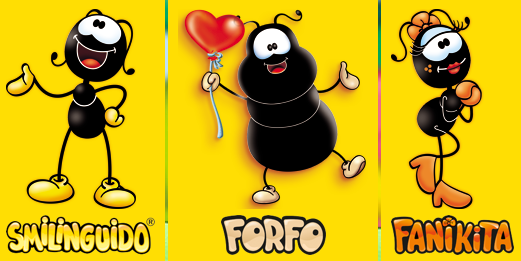 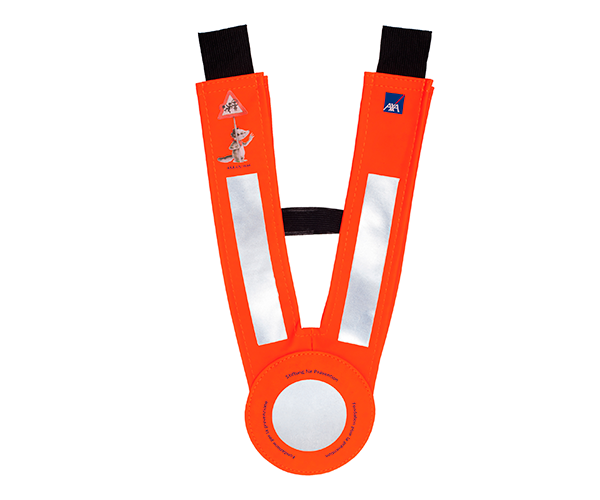 "Hey, what are you doing here, how did you get here?"
"I'm sick, and I can't go to daycare, so I came here. I walked."
"You are sick, and you walk an extra quarter mile to get here? What kind of sick are you?" 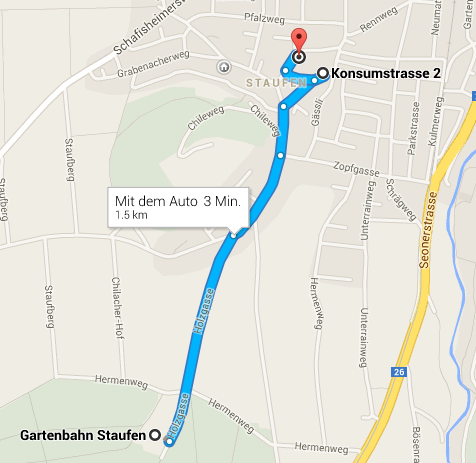 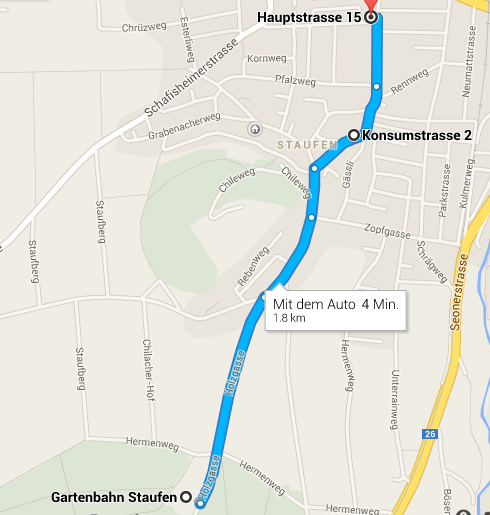 "My tummy hurts."
"Do you think you'd still want to eat something, I was just about to run over to LenzoPark  and get lunch?"
"I'd like a yoghurt, rhubarb or strawberry, or both."

Before I left, I made him call daycare:

On our way back from the market, a coworker asked what was wrong with my son, and I told him. "You know that this could have backfired?" He said. "When I was a boy, my Mom sent me to school even though my stomach ached. Later they had to rush me to the hospital and remove my appendix!" Oh man, quit making me feel bad! That boy is fine!

And sure enough, when we came back, he was sitting next to another coworker, quietly peeling a hard boiled egg, then wolfing down both yoghurts. 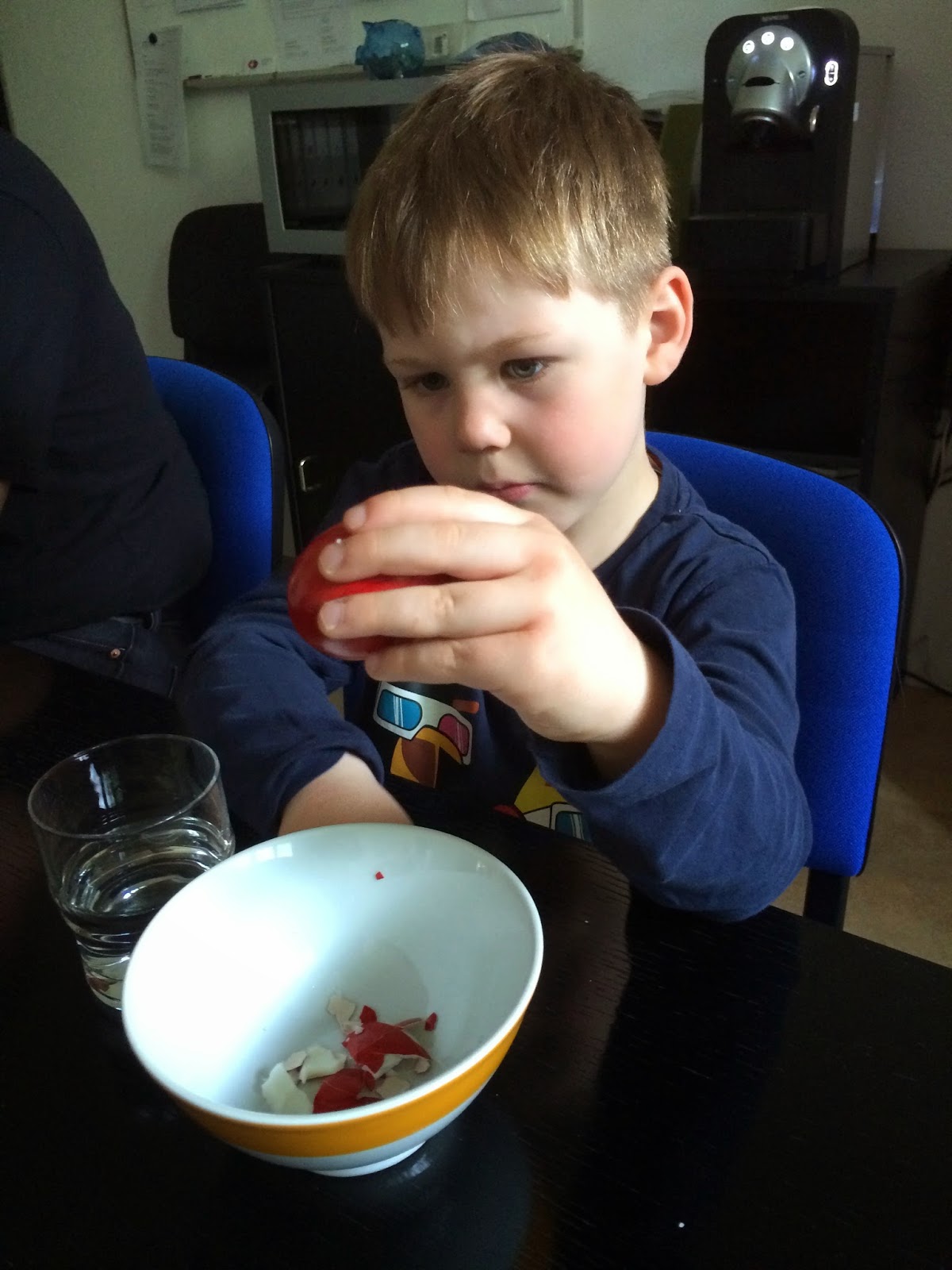 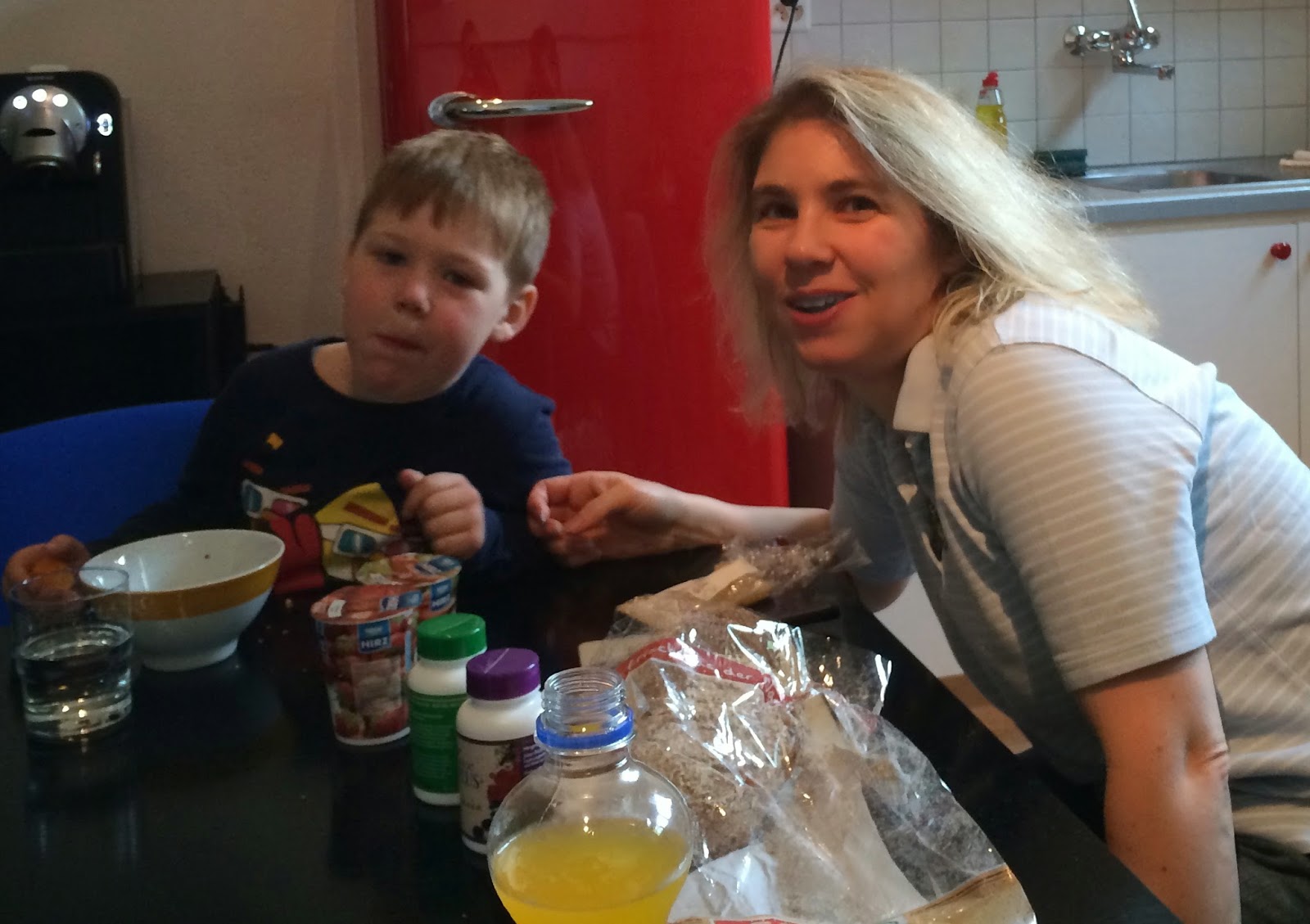 Lunch hour was over, and everyone went back to their desks. C went into Daddy's office. Hubs gave me this look.

What? You are his parent, too!!

I said "OK, listen Colin, let's go to the conference room, we need to have a family meeting! Yes, you, too!"

We told C that we didn't think that he was all that sick and he needed to choose from the following:
"I can't go to daycare, I might pass it on to other children" he said. Smartie. So I shut down my computer, shoved everything into the drawer, locked up the cabinets, and off we went.

First stop: a girl's house to drop off Forfo, the rainforest ant, so she could take it to KIK later. She wasn't home. Forfo, Smilinguido and a handful of other stuffed ants are the class mascots, and every Friday, a couple of kids are allowed to take home an ant for the week. It was important not to hang on to it longer than a week. Hence the operation "ant drop-off".

Next stop: the community building. We attached a note to Forfo and left him in front of the classroom door.

Next stop: mailbox to ship off my work of this morning, mainly invoices.

Next stop: home. On our way we had noticed that people had put out their wastepaper for the quarterly pick-up, so that's what we did, too.

Then I made him go to the bathroom, and while he was sitting there, pressing, I unpacked his belongings. Eeewww! He didn't eat all of his snacks, and everything was mashed, lumpy, soggy and also kind of smelly. The lid of the snack box wasn't entirely closed, so some of the smelly sogginess had spread onto pretty much everything else in the backpack, a set of spare clothes in particular.

Before I took those clothes to the laundry room, I thought it might be a good idea to take the things he had been wearing, too. Yes, there was a pile of stuff, and when I picked it up, about a pound of forest was flaking off those clothes. Chunks of dried mud, fir needles, pebbles, pieces of branches. I got the hand vacuum and cleaned up the mess.

Meanwhile, C was still sitting on the toilet, his face all red from the hard work he was accomplishing.

Then I got to clean up the, you know, other mess. Gosh, how can a little boy produce so much poop? No wonder his tummy was aching!

Of course he felt better now and wanted to go and play outside. Or better yet, go to daycare.

I made him spend an hour in his room (he actually read a book. In bed!) and said no to iPad use.

"You are so mean, making me take an Amish Day while you are on your computer!"

Can you say "work from home cause I had to leave the office due to a kid that was too sick to go to daycare?"

So all in all it was just a regular week. How was yours?

Here's your reward for keeping me company: