Shoot-out of the other kind

July 15, 2014
Before I even start, let me mention that the only weapon at our house is a cardboard sword, and that I am all about making love not war.

Every two years, the youth festival in Lenzburg, the town I attended high school at, celebrates an old traditional maneuver. And tradition is justification for everything, I guess.


The way I understand it, it all goes back over 250 years ago, when male students were being trained for life, starting at an early age of ten. They were called cadets, got a uniform, engaged in team sports and played march music.

Rumor has it that one day in 1852, they were simulating a combat and were "assaulted" by a bunch of silly grown-ups. Surprised, the kids accepted the challenge, fought back - and prevailed.

Since then, every other year, this scenario is being re-enacted, much to the liking of conservative citizens. I have to admit, I like the colorful event, too, even though I am not sure what message we send to our kids.

This is the official video of the 2012 maneuver.

As for 2014, meet the line-up: (note the imbalance in numbers!)
The regular youth festival preparations take all week. Bows are being erected and decorated with wreaths made of fir branches, fountains will be transformed into seas of flowers, and clothes and costumes, weapons and ammunition are being layed out.

Three nights in a row there is an open air disco for the high school kids. Fun times! Lip synching contests on stage, (I did Alison Moyet one time), lip locking sessions by the big trees away from the stage (I did what was his name..? Hahaha, kidding).

Frankly, by the time the actual festival used to go down on Friday, I used to be dead tired because every morning wreath making and flower collecting duty started at 7am!

This year, I give you the youth festival seen through they eyes of what I am today: part-time working mom, stuffing her purse with rain gear and umbrellas.

Being true to my label I worked in the morning. One of my first actions at the office was to consult the weather forecast (heavy rain, thunderstorms) and the announcement on the city's website ("we have decided: it's going to be nice.") Conflicting info. 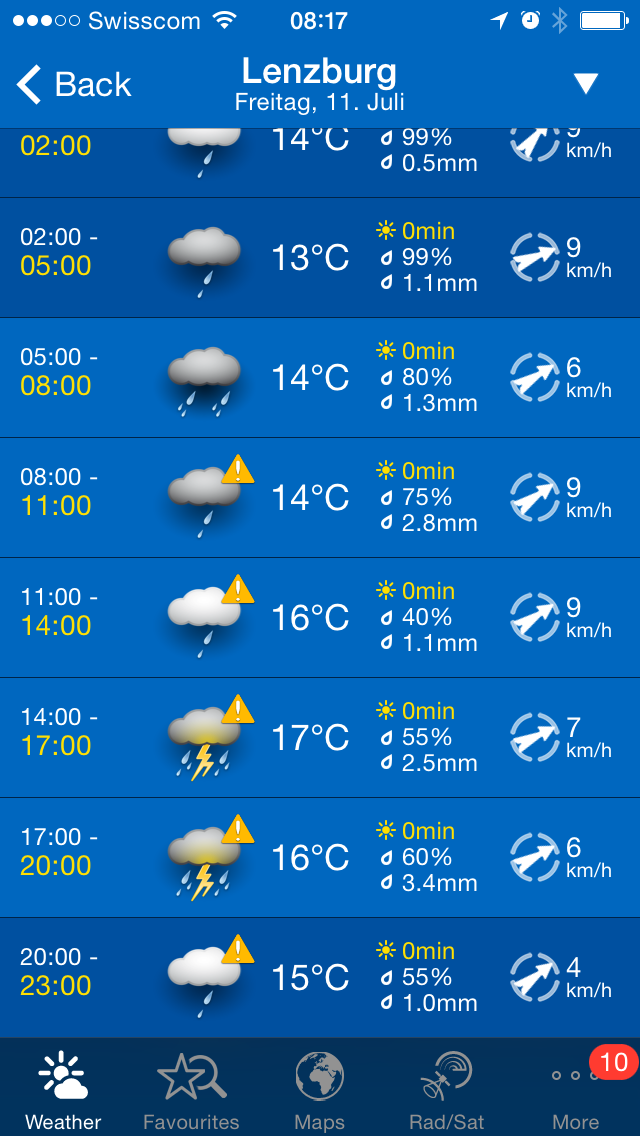 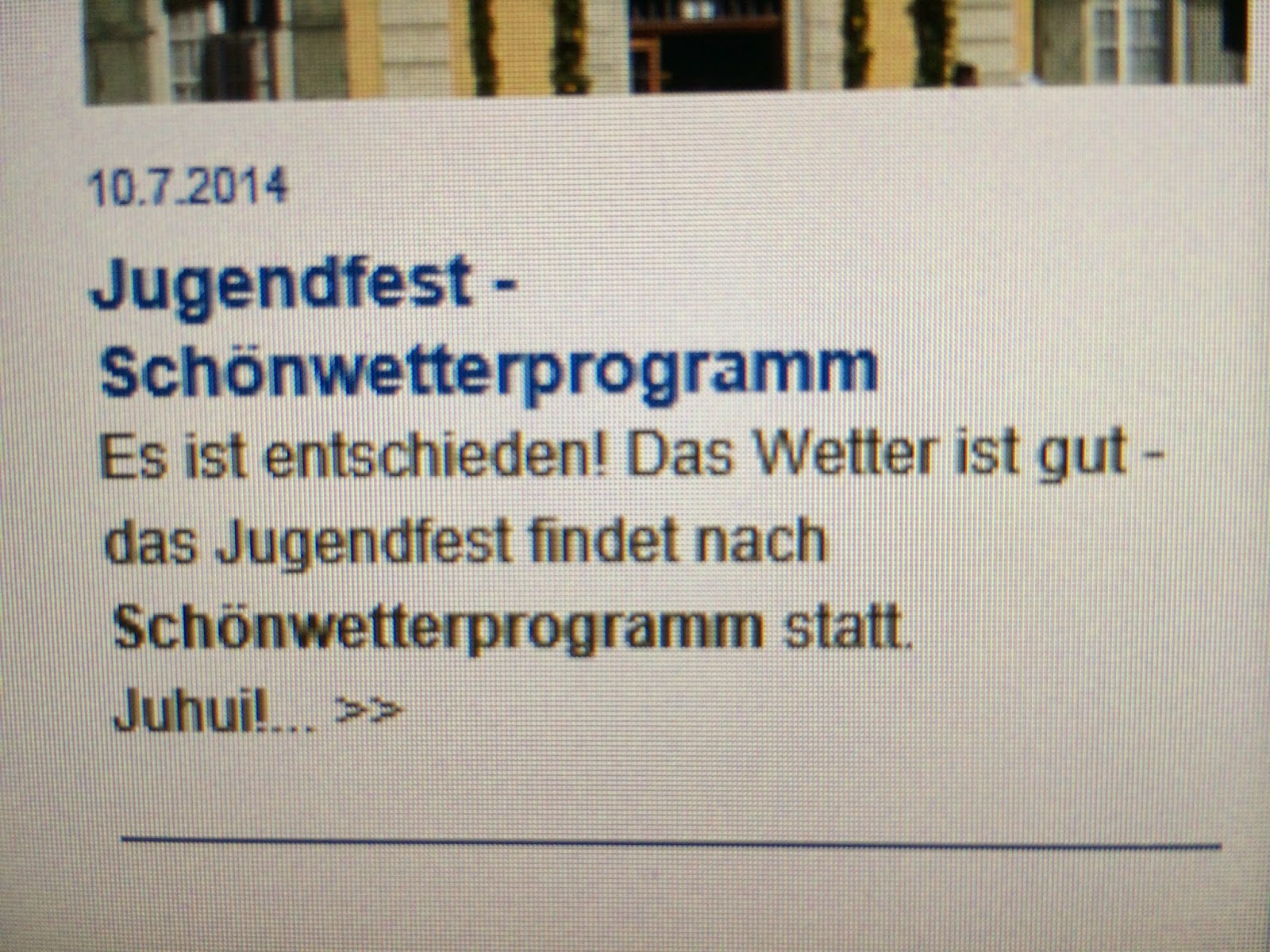 Texting back and forth with Doris, the bottom line was "we took the afternoon off - we are so going!!"

In the morning there is a parade to and from church.

This year I didn't watch (remember: work), but Colin did with his daycare buddies: 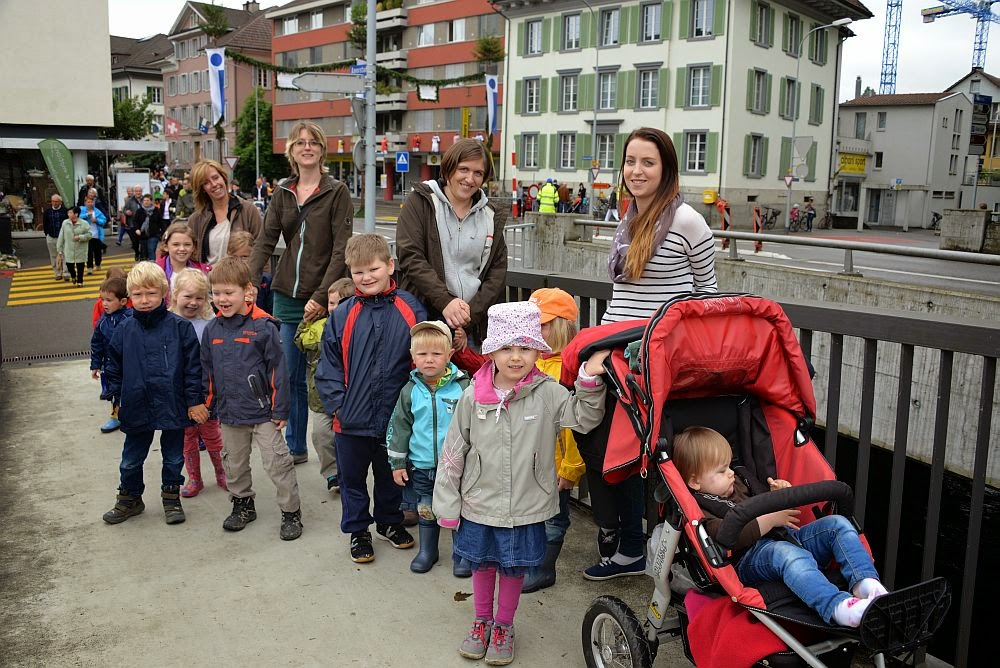 Flashback to my four years of high school:

The Freischaren are not only about fighting, they also need food. These days their chefs make kebabs and share it with the audience, much to our boys' liking!

Once the parade passed through the old town, they assumed their assigned positions like on a nearby hill or in the forest. 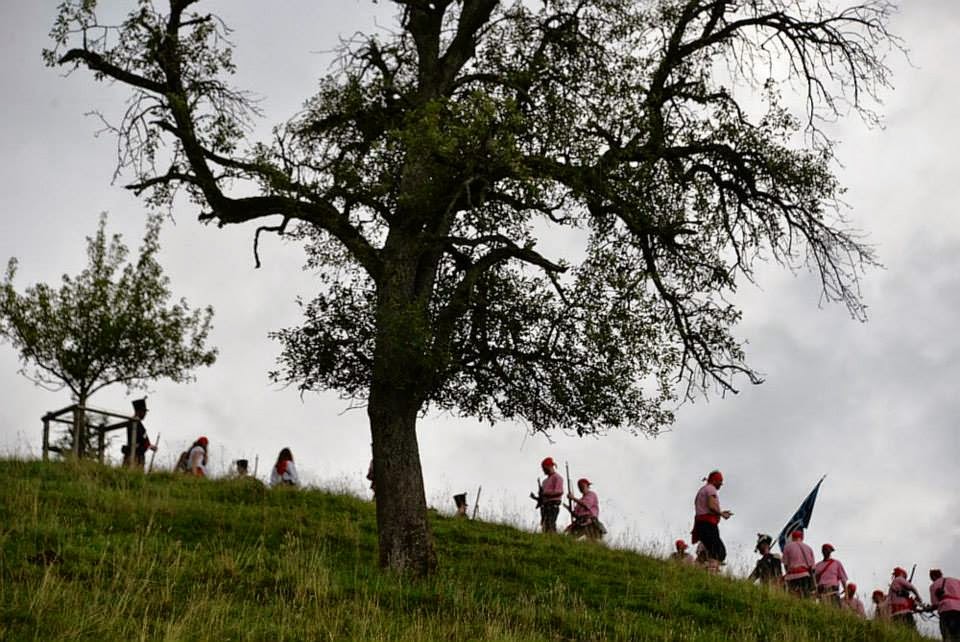 We, the audience, got to wait again. Inspecting the dark clouds, and having our picture taken by the boys. I also took two of the young men to buy some bottled iced tea. They held it in a way they must have observed somewhere (I didn't ask!) and proclaimed "hey, look how huge my INSERT REALLY RUDE WORD is!" WTF? 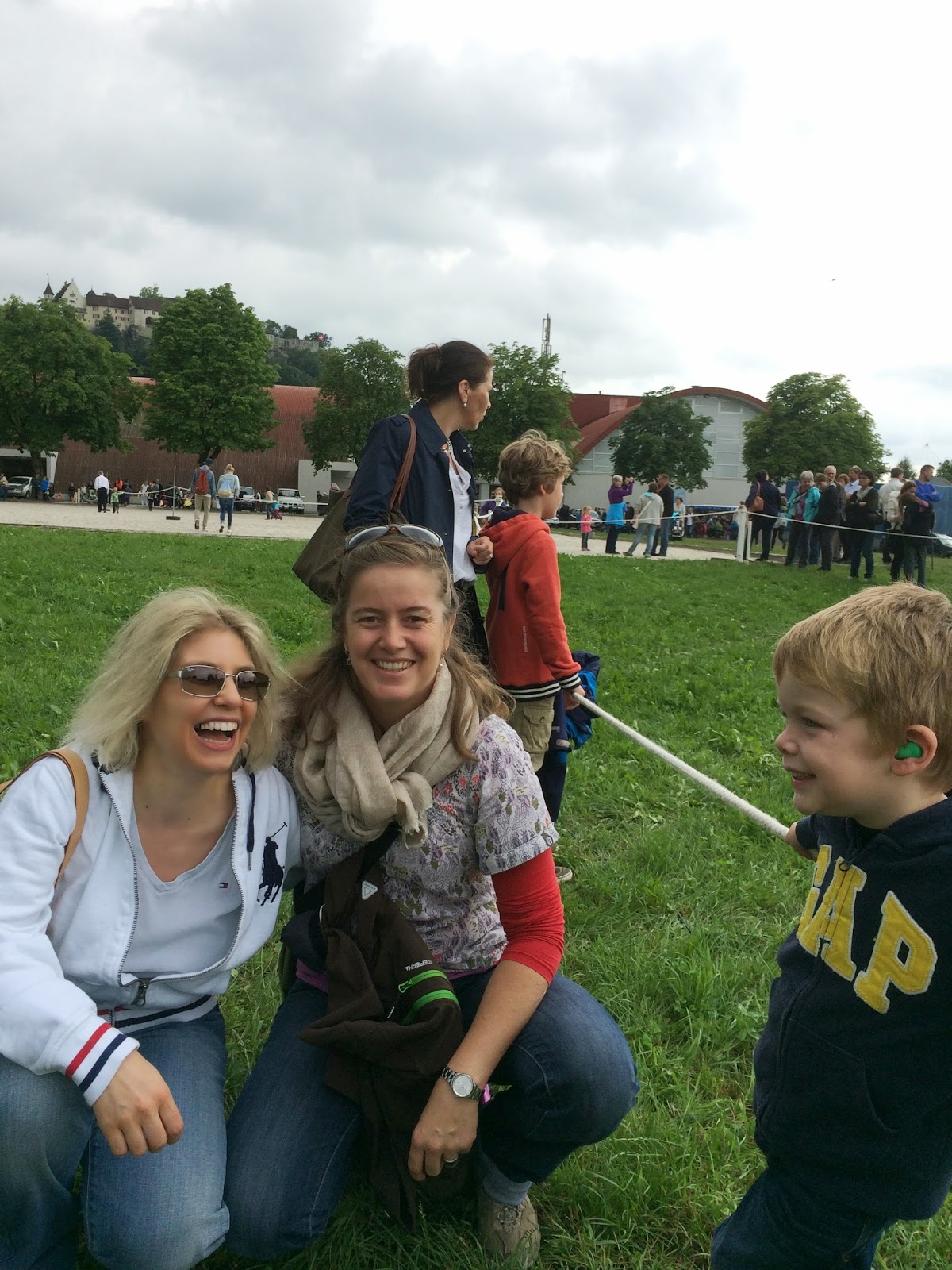 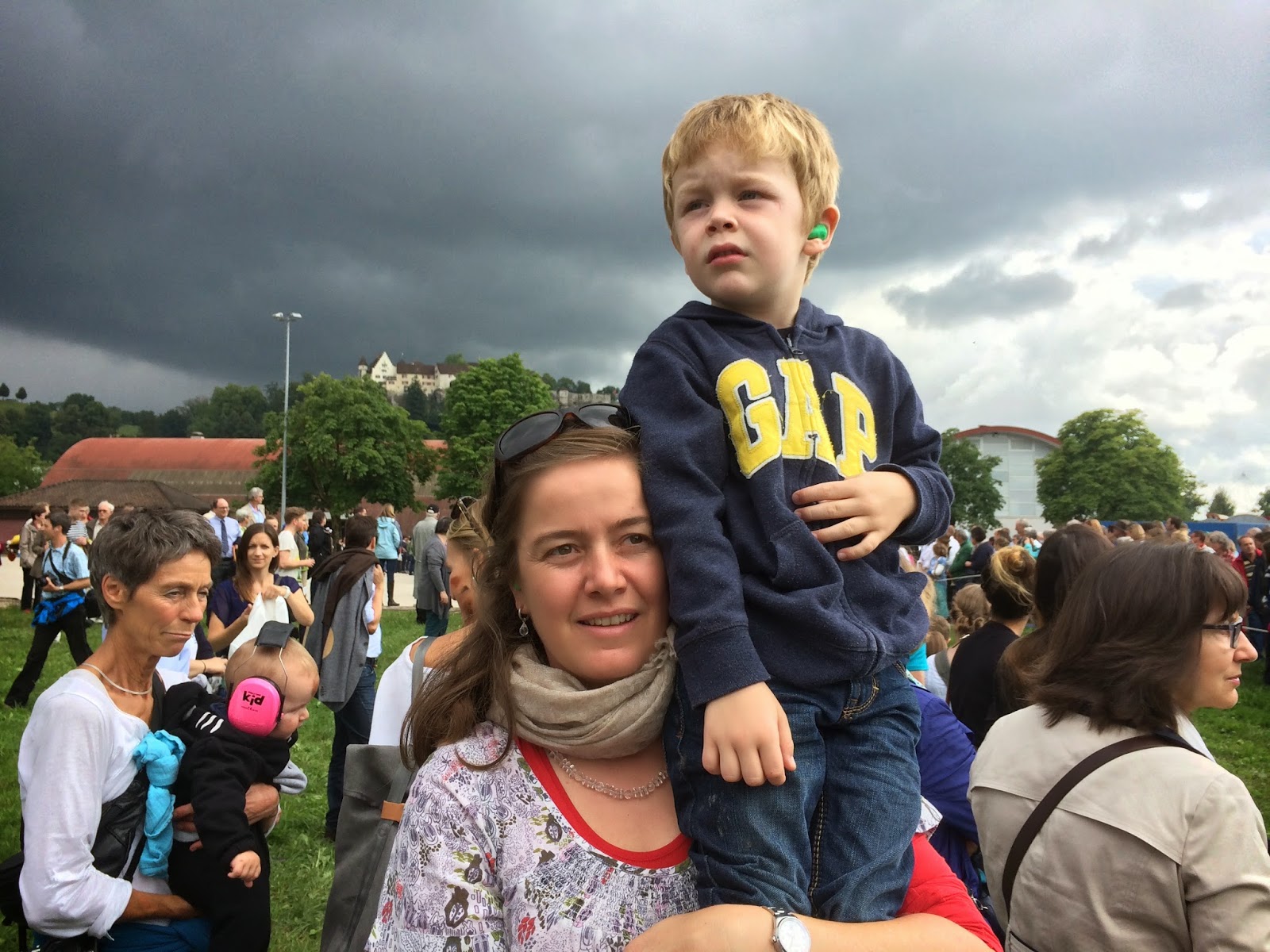 Then they march onto the battlefield.

The cadets and cavaliers:

Then they basically fought, banged away, shot, fired, and then some more. Of course they were not using real ammunition, but it sure felt like it. The dark clouds must have been pretty intimidated by the noise and went someplace else to cry!

The cadets managed to ignite the cardboard castle, but the Freischaren wouldn't surrender just yet.


More shooting and canon fire, it was awfully loud. Good thing that this year they distributed foam ear plugs.

Until, finally, the General handed the cadet captain his saber and the treasure box filled with gold and jewelry as a sign of their capitulation.

The cadets cheered. The Freischaren took it easy - after all they were used to it.

Then everybody went home.

Well, not home-home. To the bathroom (long lines!), to the beverage booth (long lines!), to the cotton candy stand, to the dance floor where  they say it is bon ton for the warriors to rub off that make-up on the dressed up ladies' clothes. And if you're a mom to 4 - 6 year old boys, you are sure to end up by the bumper cars: 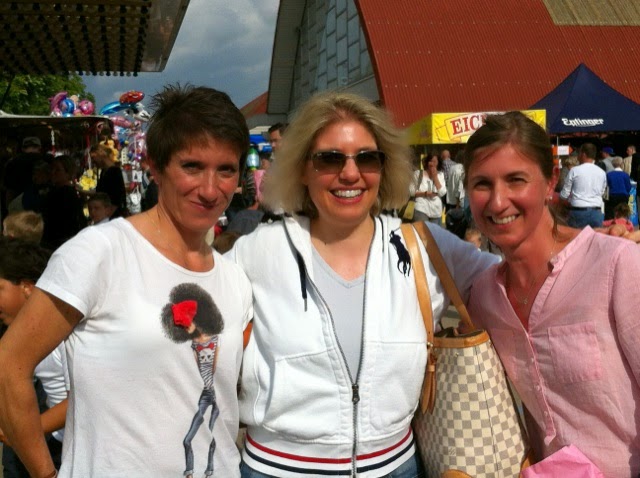 Doris and I took the boys to an old town café and texted our husbands to join us for dinner.

We made it home and out of the shower by 10pm - shortly after this the fireworks began. I watched them out of the bathroom window. Pictures were taken by my elementary school mate Monika, thank you for allowing me to use them here!

This was it for the Lenzburg youth festival 2014. I think if I lived abroad this would be one of the things I would miss or visit home for. 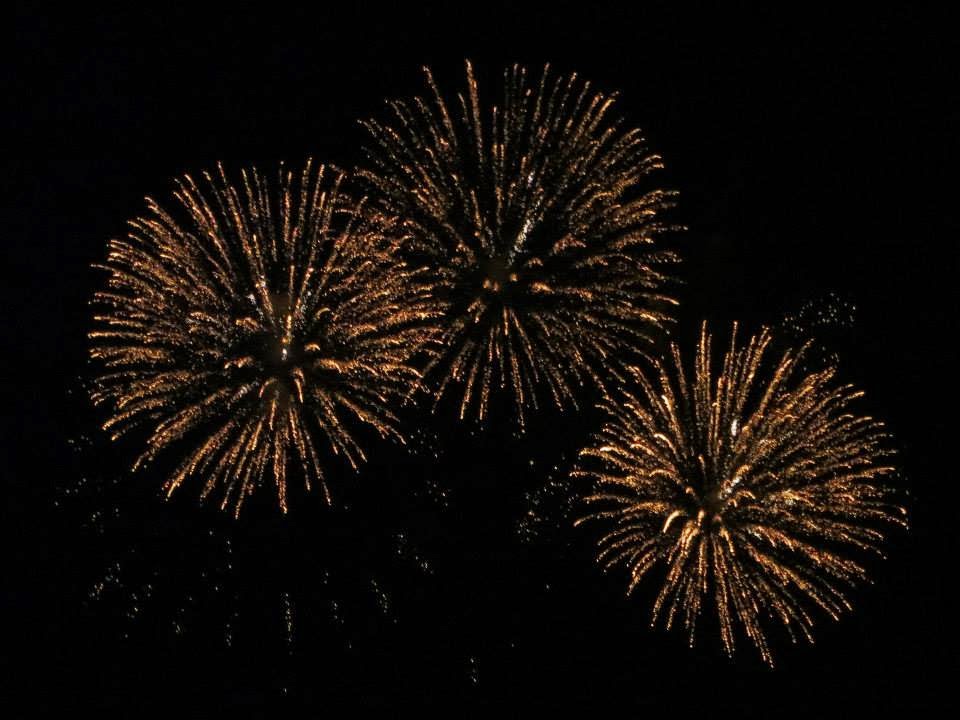 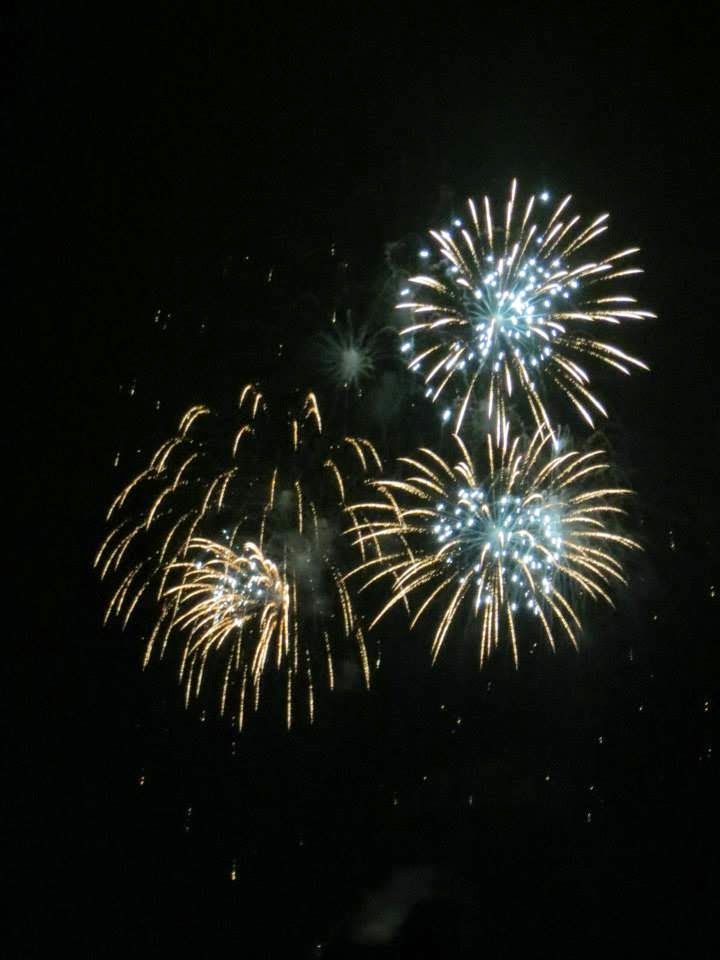 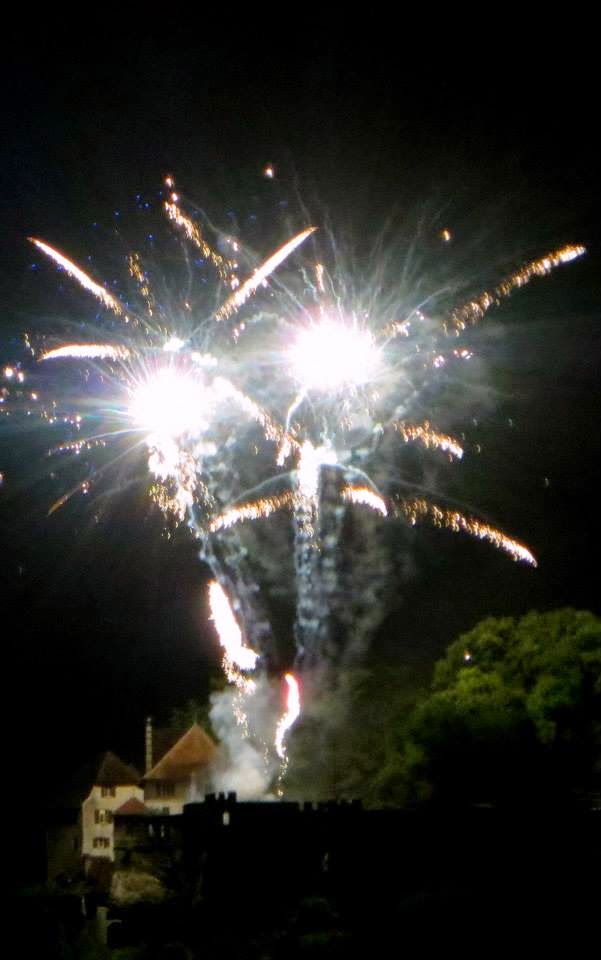