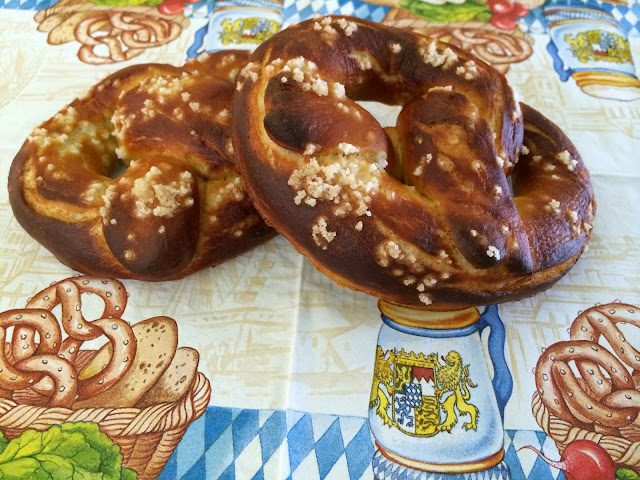 Over this summer I may have expressed my disdain for the land of soccer world champions, and the feelings actually run deeper than sports.

German immigrants - we like to call them tax fugitives - have been invading Switzerland these past few years, and while the average German is just as nice as the next person, there are individuals who tend to come across as ignorant and arrogant which I have a hard time dealing with, especially if they happen to be my boss, and I have had several in my career.

Also the language doesn't sound all too inviting:

That being said, us Swiss folks like to think that Bavaria isn't actually a part of Germany, but rather a North-Eastern canton (state) of Switzerland, cause those guys are rural, down to earth and fun. Clichés, clichés, agreed.

What is this all about? 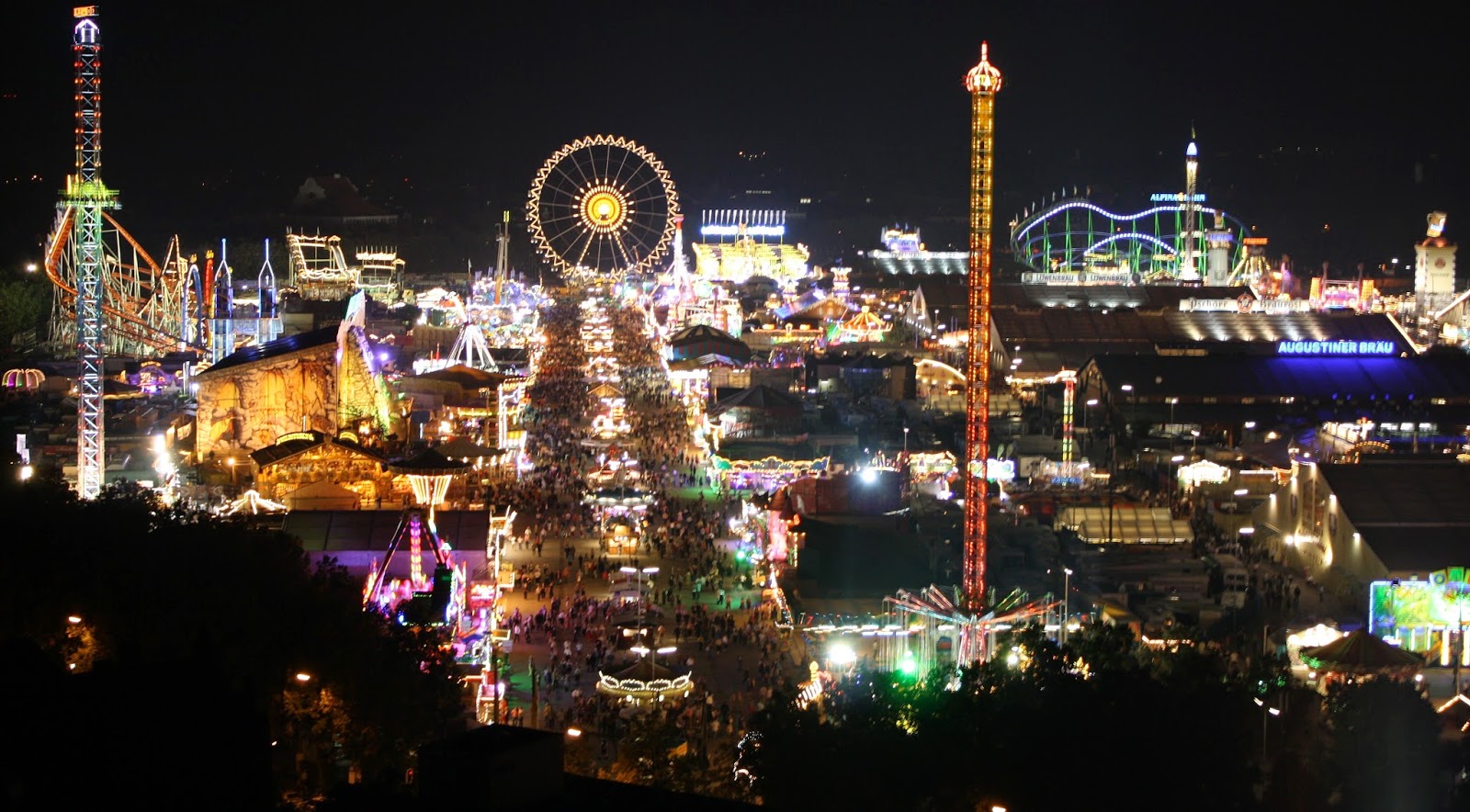 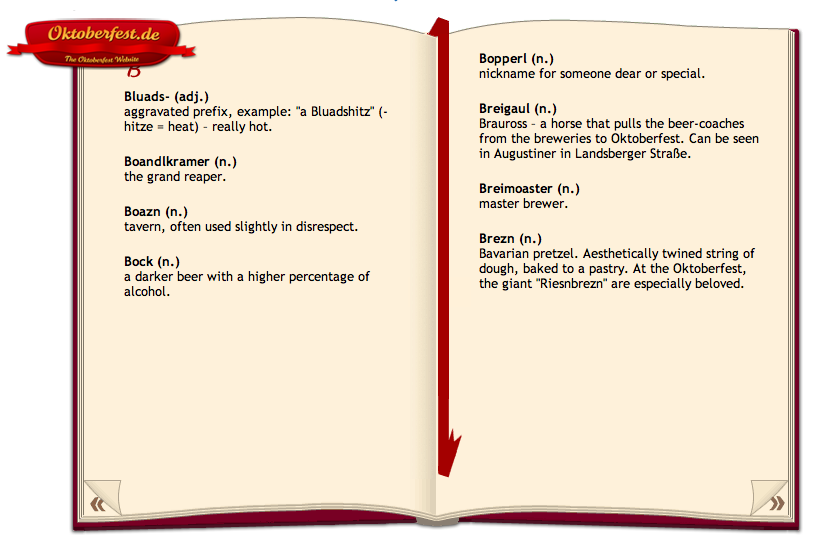 There are heated discussions going on about the difference between Bavarian Pretzels, "Bayrische Brezn" and Swabian "schwäbischen Brezel", some even claim there are typical Frankonian ones - which are all Bavarian administrative districts, so what's with the competitiveness?

There are dozens of different recipes. I am confused. Nevertheless I am determined to introduce you to one that I made and like!

Start by making a yeast dough with the following ingredients:

Knead dough in the kitchen machine for 5 minutes or by hand for about 15-20 minutes, let it rise in a warm spot until doubled in size, for about an hour.

Divide your dough into 8 equal pieces and roll them out with your hands to about 24'' (60cm) strings. 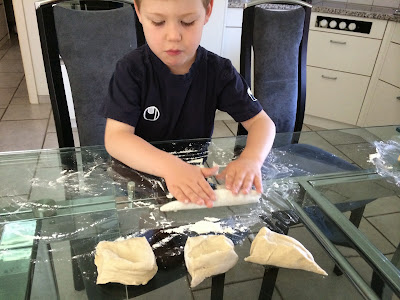 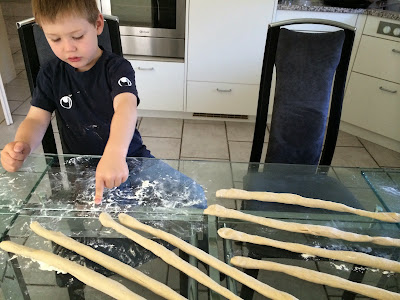 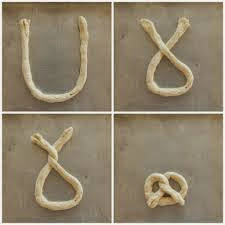 If you're feeling frisky you can also do as the pros do:

Let them rise for another 30 minutes 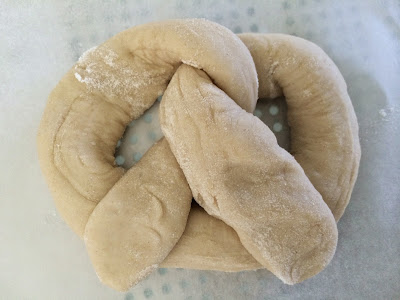 Then put the pretzels in the freezer for 30 - 40 minutes,
so that they will keep their shape after they went dipping. 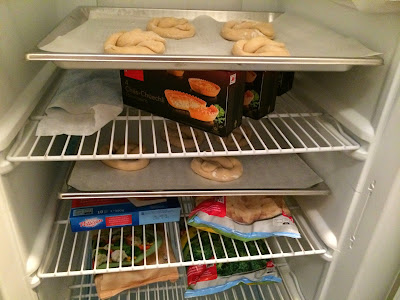 In a large pot, dissolve

bring to a boil,

turn off the heat

and dip each pretzel in for 10 seconds on each side. 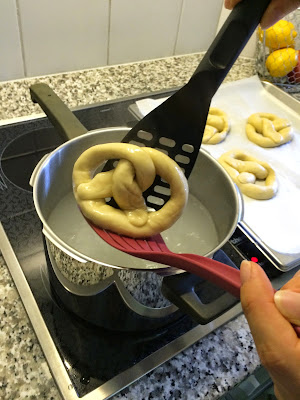 Put them on cookie sheets, lined with parchment paper,

and sprinkle with coarse sea salt. 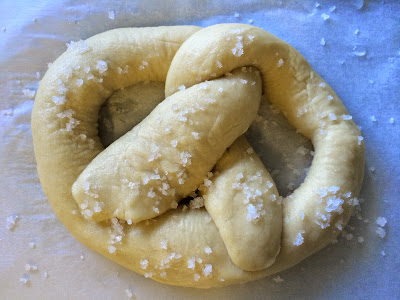 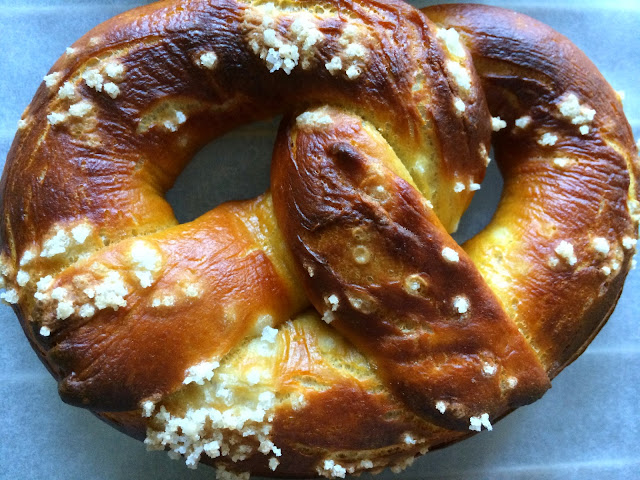 PS: in professional bakeries they dip the pretzels in a 3% lye solution to give them the dark brown color. I don't want to do that in my kitchen. You have to get the lye at a drug store explaining why you need something that is corrosive and sign some "we told you it's dangerous" waiver. Then you have to wear chemical-resistant googles and gloves during the dipping procedure, and when you're done you have to pour your lye into a container and bring it back for safe disposal. A no-no for me. Plus I was quite happy with the color of my pretzels without doing any chemistry experiments, thank you very much!

A couple of words about the video below. This is a piece of Oktoberfest tradition you should know about. It's called "o'zapft is". It means as much as the beer barrel has been tapped.

This year it is going to happen on Saturday, September 20, at 12 noon sharp. There's an actual countdown for the mayor to do this procedure. Thousands of locals and tourists - and of course media - are present in the beer tent for this!

Over the course of the two weeks'  festivities there are going to be seven million people visiting and roughly the same amount of 1 liter beer mugs sold, that's enough to fill three Olympic swimming pools!

Now if you're asking yourself why the Oktoberfest is called Oktoberfest but actually takes place to a larger part in September, you've come to the right place. I googled it for you because I have been wondering about this as well.

The first Oktoberfest was held Oct 12, 1810 in honor of a royal wedding. It lasted for five days and ended with a horse race.

Over time they moved the festival to an earlier start date mainly for better weather conditions.

Enough talk. Let's take the hammer and tap that barrel!