October 02, 2014
This nice rainbow was welcoming us at 100 Mile House. Before we departed from Kamloops I fortunately cleared up a misunderstanding and learned that our friends actually live in 150 Mile house. Would have been a 50 mile mistake only ;-) 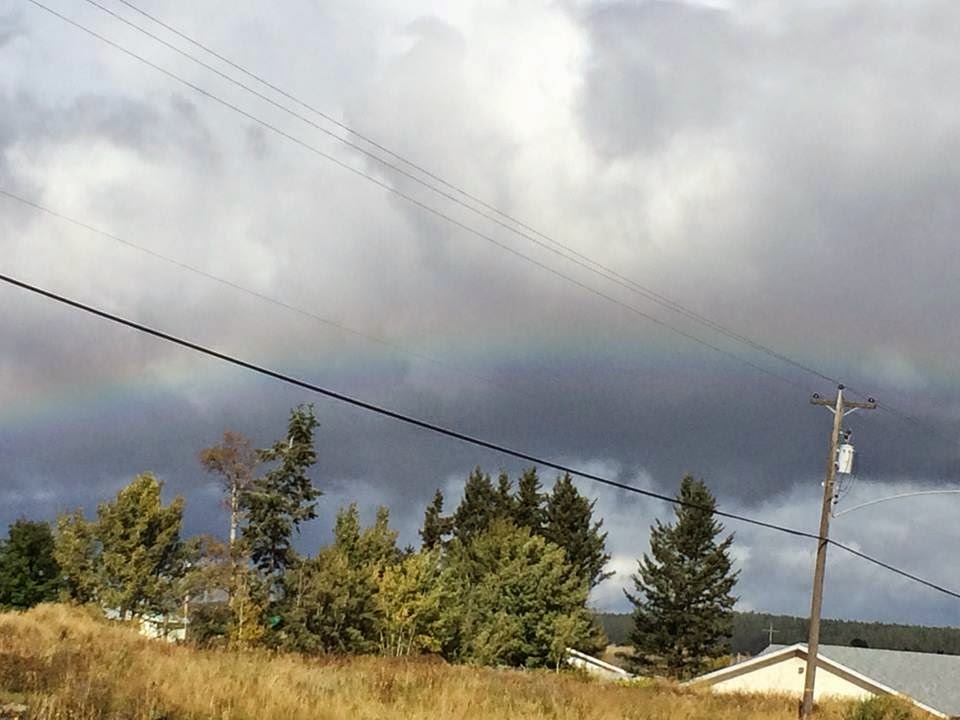 Just in time to join Annette in picking up the kids from the schoolbus stop! 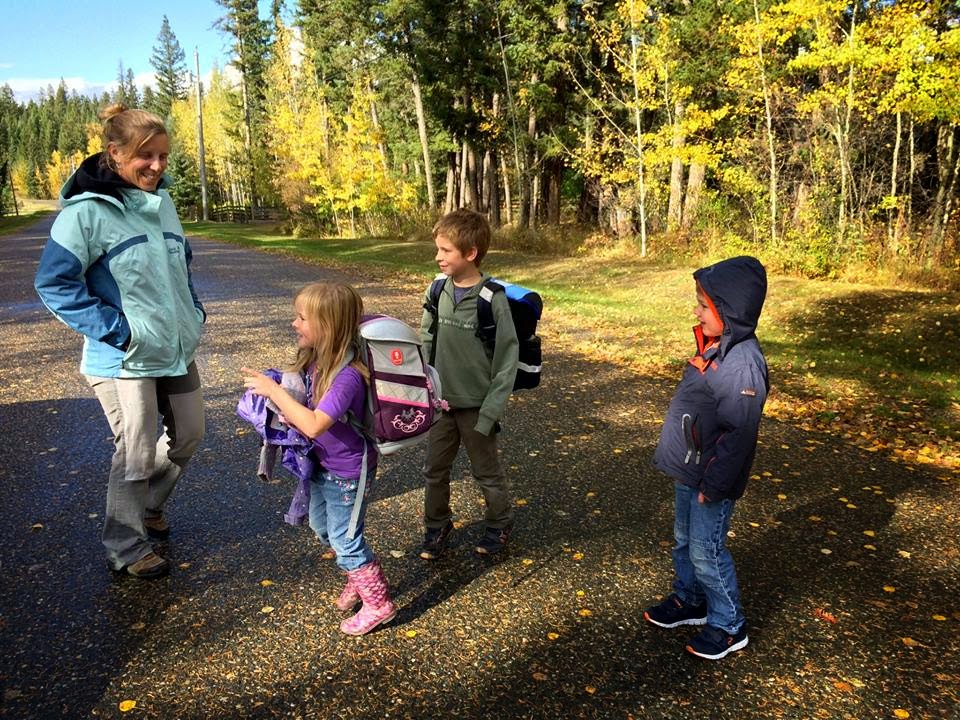 Don't forget to say hello to this furry guy! Originally called A7, his name is Arnold now: 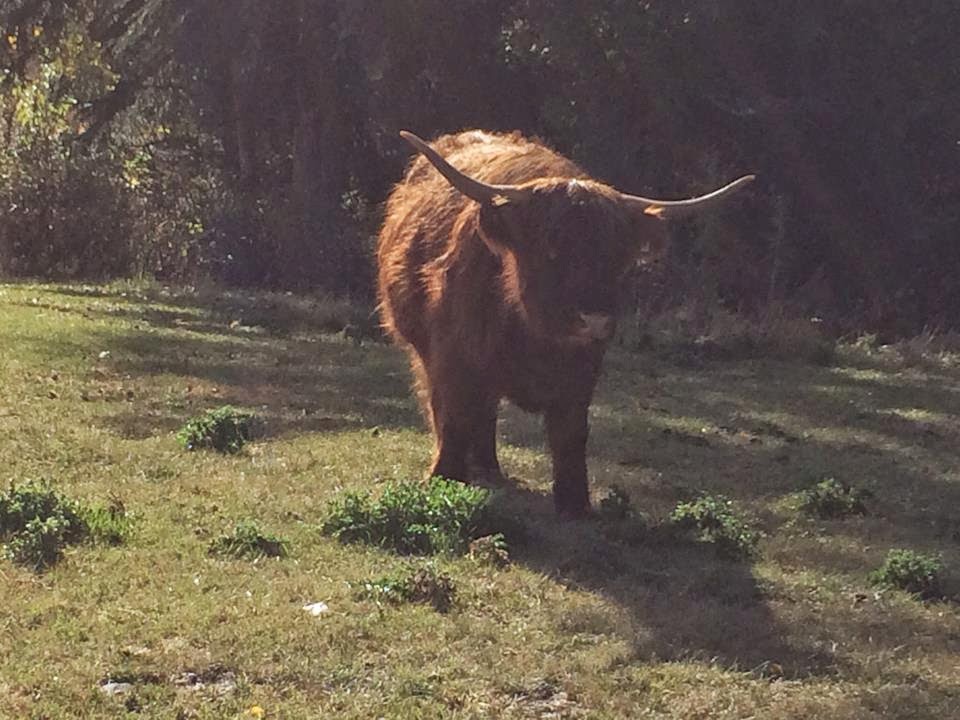 First gingerbread of the season, yum! 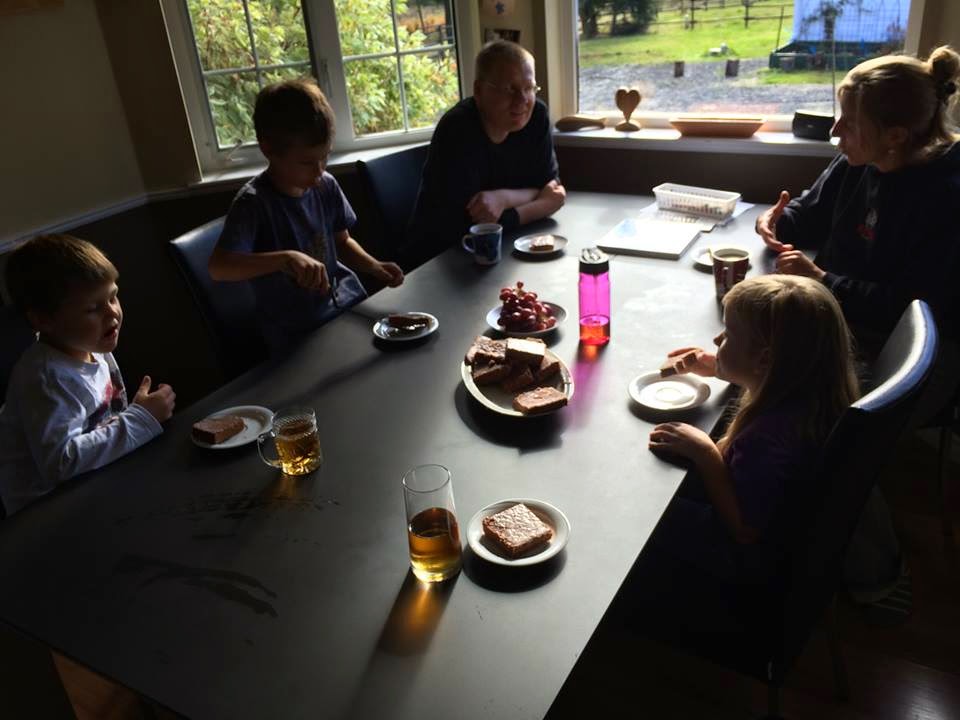 Then Paul needs to work on his flash cards. 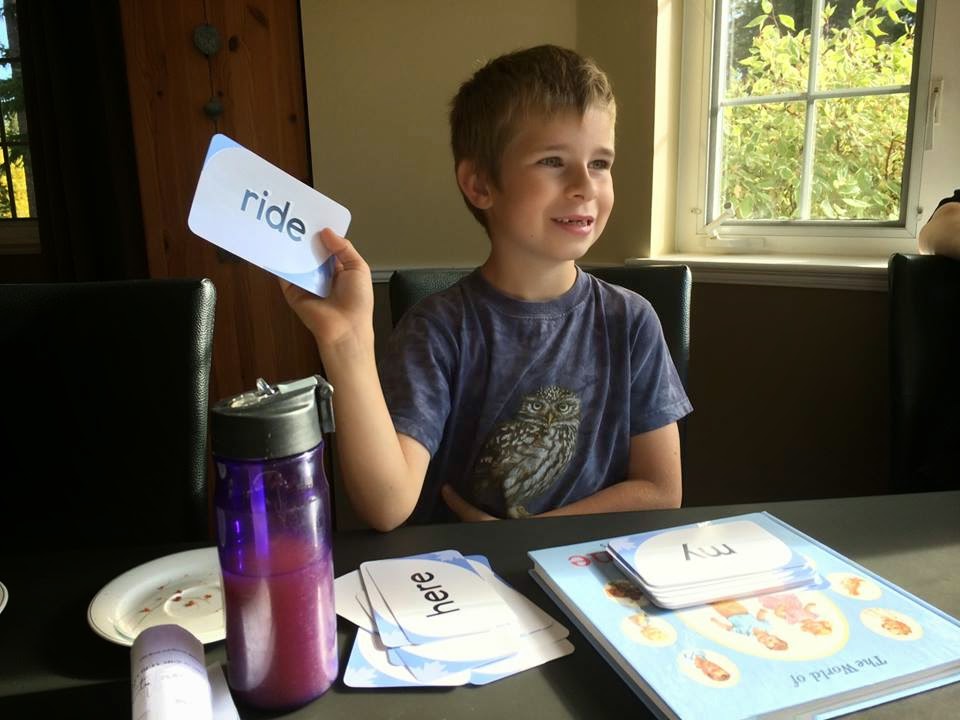 Speaking of rides, It didn't take long and Dad got home to give the kids a ride of the special kind. After one round he invited hubs to give it a go, and you guessed right, it was my turn after this! Jesus Christ, I have never driven a 4 wheeler, and the information "turning is a bit hard, make sure to take wide turns" wasn't helping my case! I drove off carefully, 22 kmh = 13.5 mph. Of course the guys on the backseat yelled "faster, faster! Full throttle, come on now!!" As soon as we left the gravel road I felt more secure. The intersection at the end of the road seemed like a wide enough place to turn, and it worked out fine! Phew! 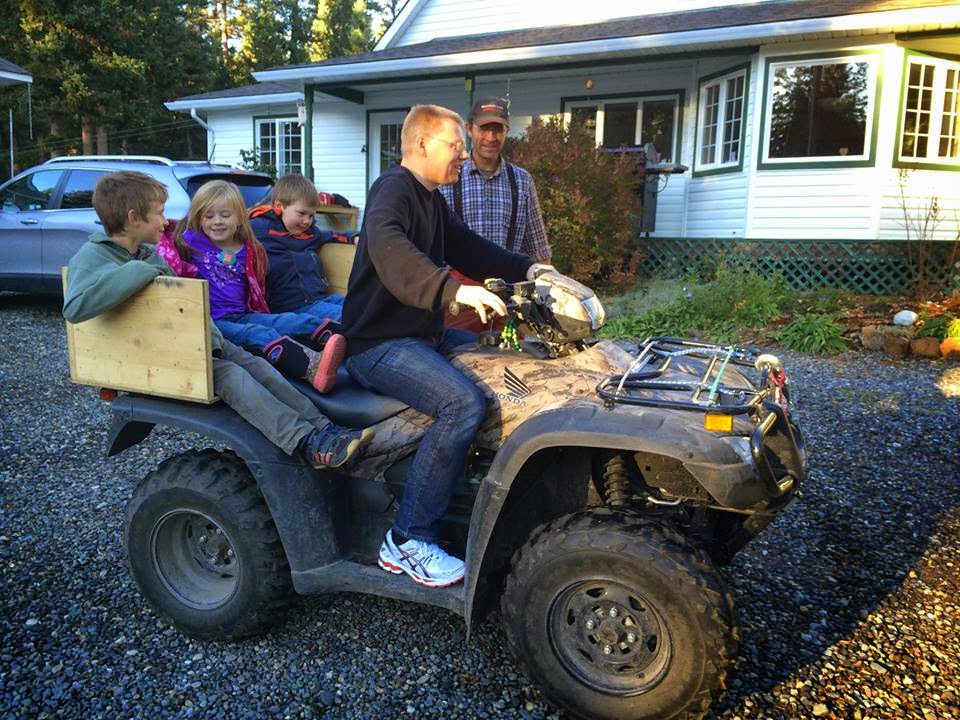 That was just about enough adventure for one day, and I retired to the kitchen to "help" Annette making dinner. I watched her, and we chatted. They have been living in British Coumbia for a little over a year now, and we had lots to catch up on. 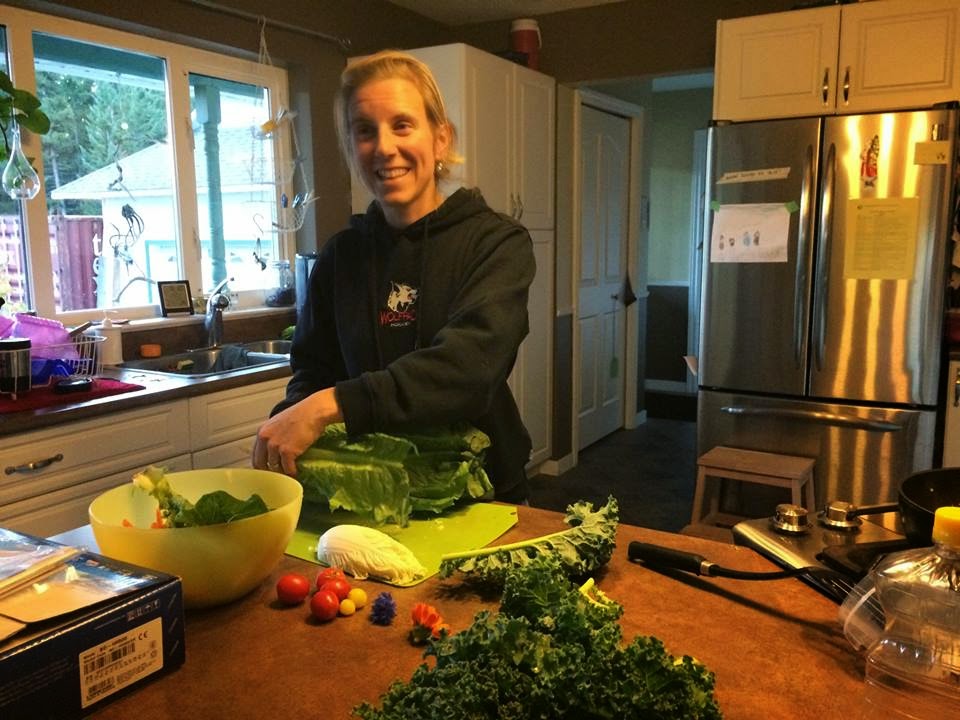 The kids had a blast playing together, and soon after dinner, they had to go change into their PJs and go to "sleep", so us grown ups had some quiet time to do some more catching up. We didn't stay up too long though. Some needed to get up at 5am the other morning, and others were still impacted by a 9 hours' time difference. 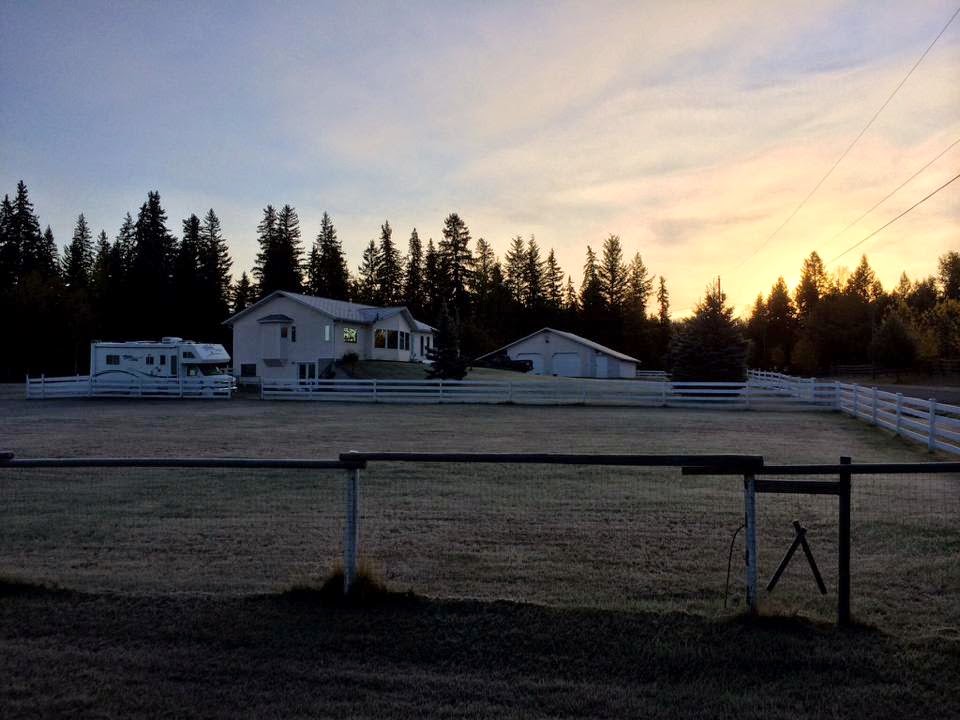 We took the kids to the bus stop and waited till it pulled up. 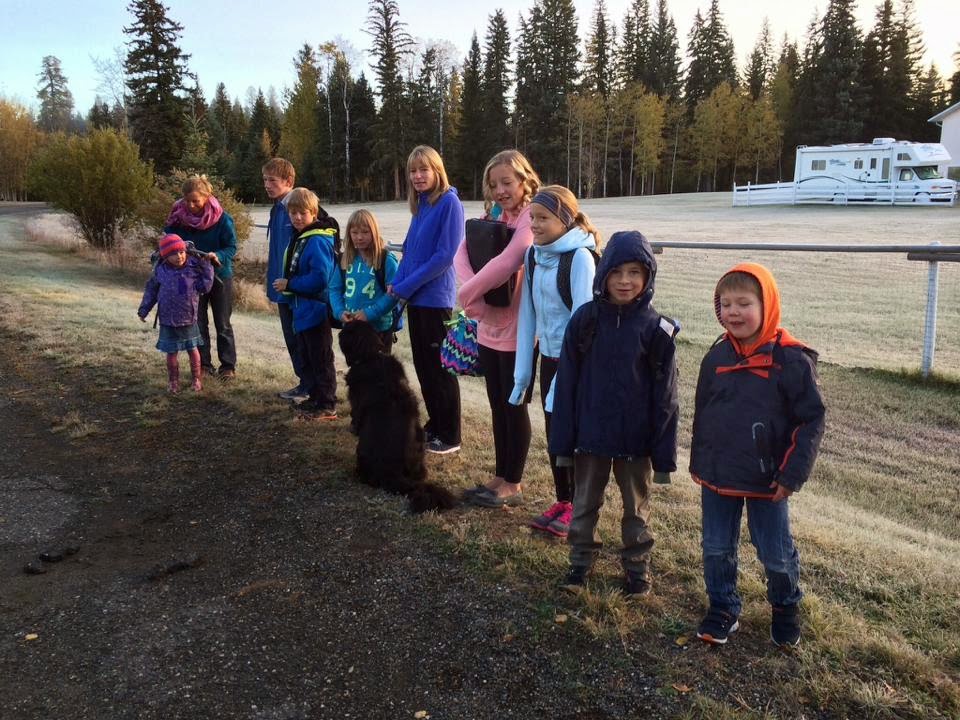 North American readers, please excuse me if I'm excited about something that is part of your very usual morning routine! 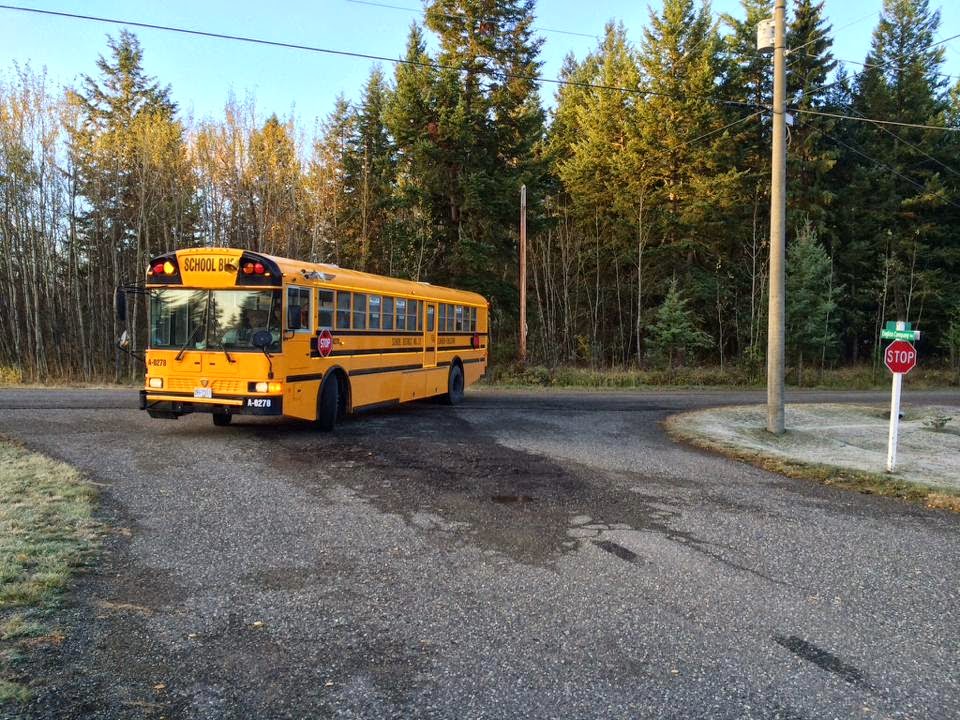 For us Swiss folks a yellow school bus is reason to take pictures! 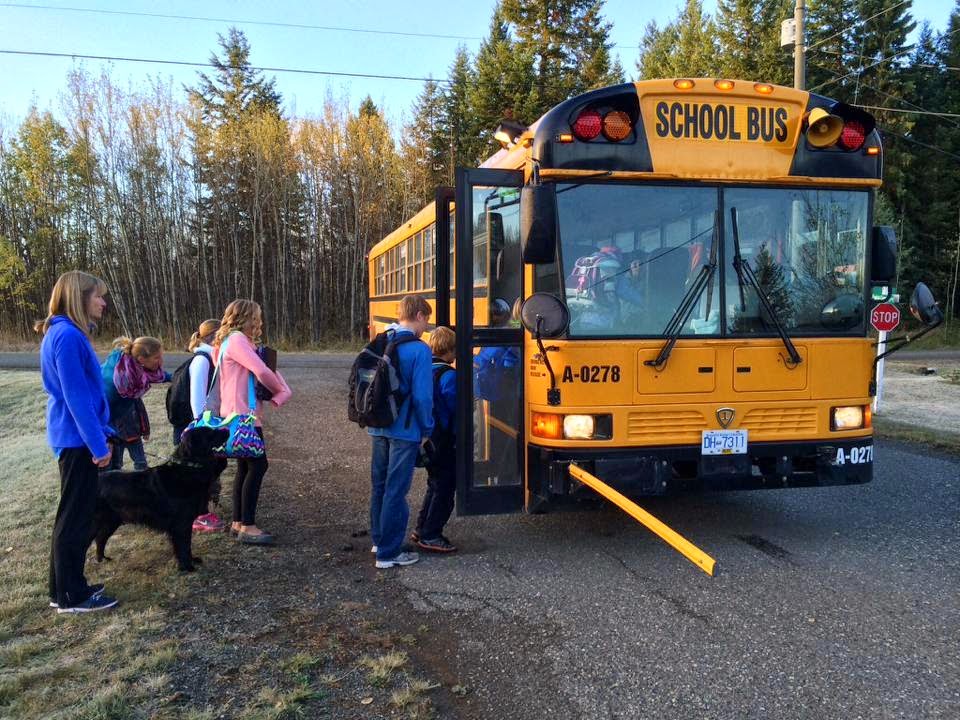 Only insured students are allowed to ride the bus, so we had to take Colin in our boring regular car. Yeah, you've heard right, he was allowed to join Kristin for her first term of the day. 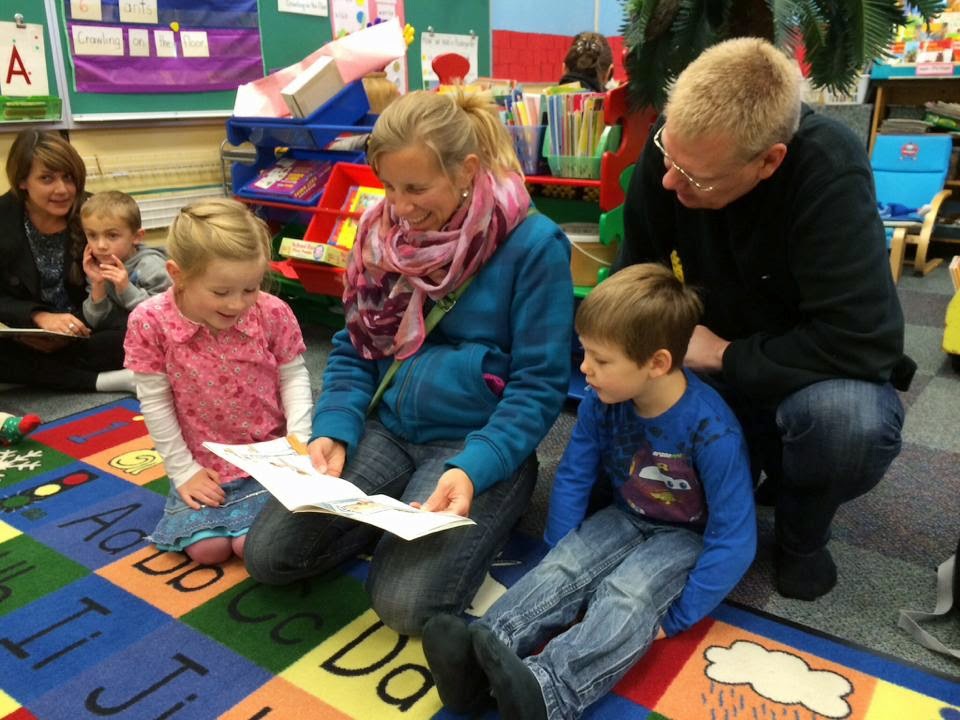 As Canadian teachers went  on strike two weeks before summer break and three weeks after, they only just got back to school recently. Currently they are learning everything about the letter A and are especially talking about apples and ants. 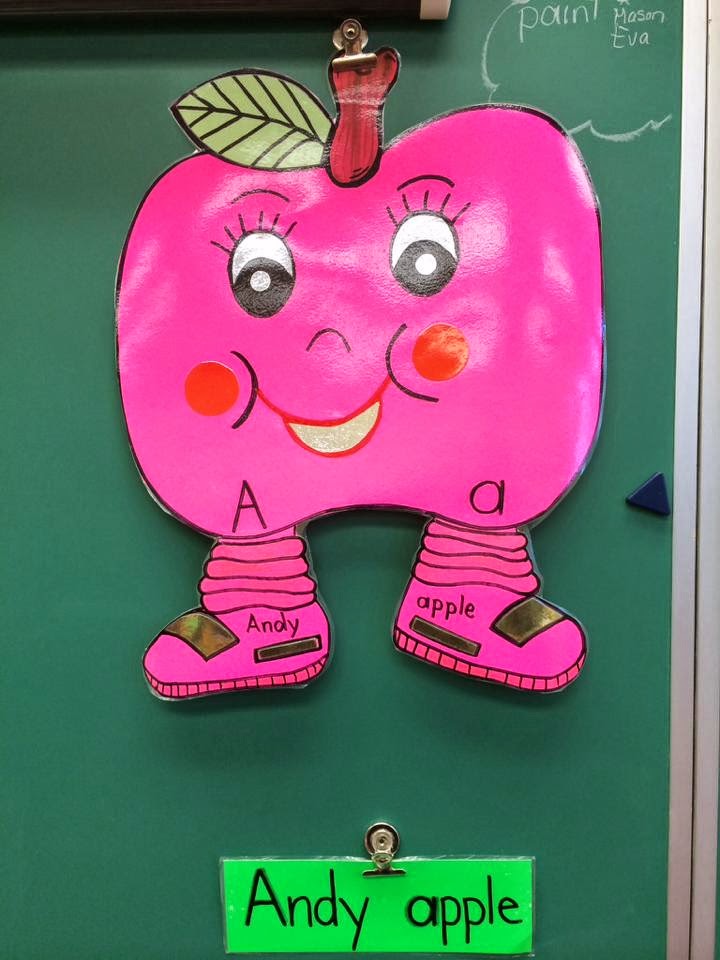 In the hall there were a lot of quotes on the wall like "if you don't have anything nice to say, keep quiet", "smile - it's the key that fits the lock to everyone's heart" and this one, my favorite: 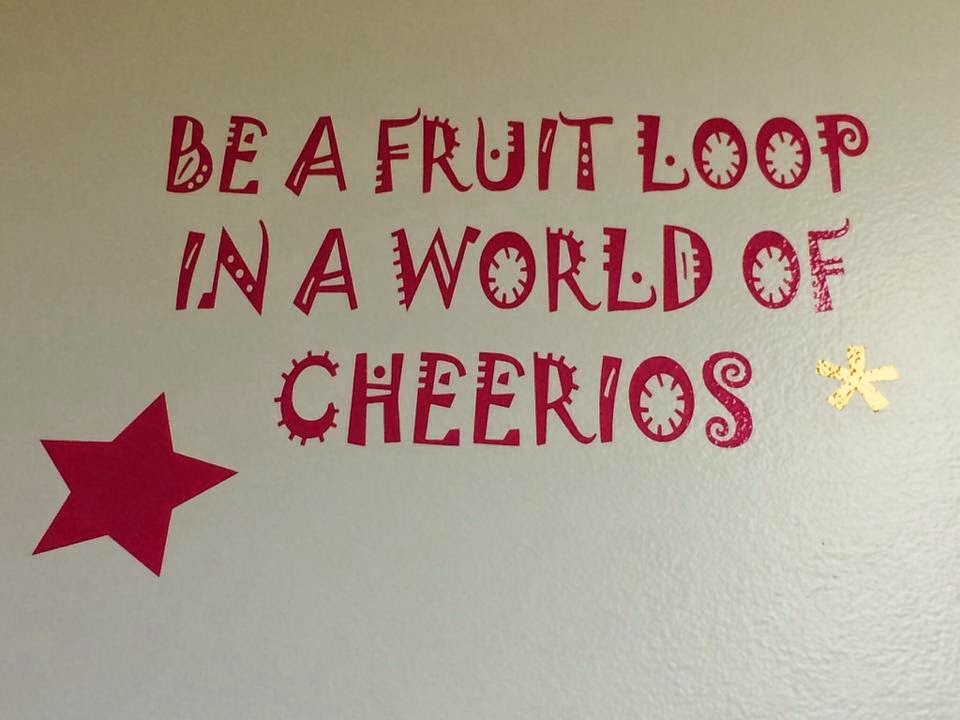 School was out early for us, so we headed to Kurt's building site to see how their log homes are being built.

On our way a police car followed us. We didn't think anything of it. Annette was showing us one of the houses they had looked at when they were house hunting last summer, and we may have gone a little slow.

Sure enough the officer who stopped us asked if everybody was doing OK, nobody impaired, drunk, falling asleep or anything, and could he please see a driver's license?

Hubby went "it's aaahhm, at home."

Officer: "where is home?"

Annette: "at my home - they are visiting. I've got a driver's license, here you go!"

The officer was nice enough not to charge us the CAD 276 fine that usually occurs for failing to produce a valid driver's license. I kind of wanted to take a picture but I didn't want to misuse his generous mood. You know what a police car with the flashing lights on looks like, right?

Even so we made it in time for Kurt's break, and he took the time to show us around:

Next stop Dollarama - in full fledged Halloween mode. I like! 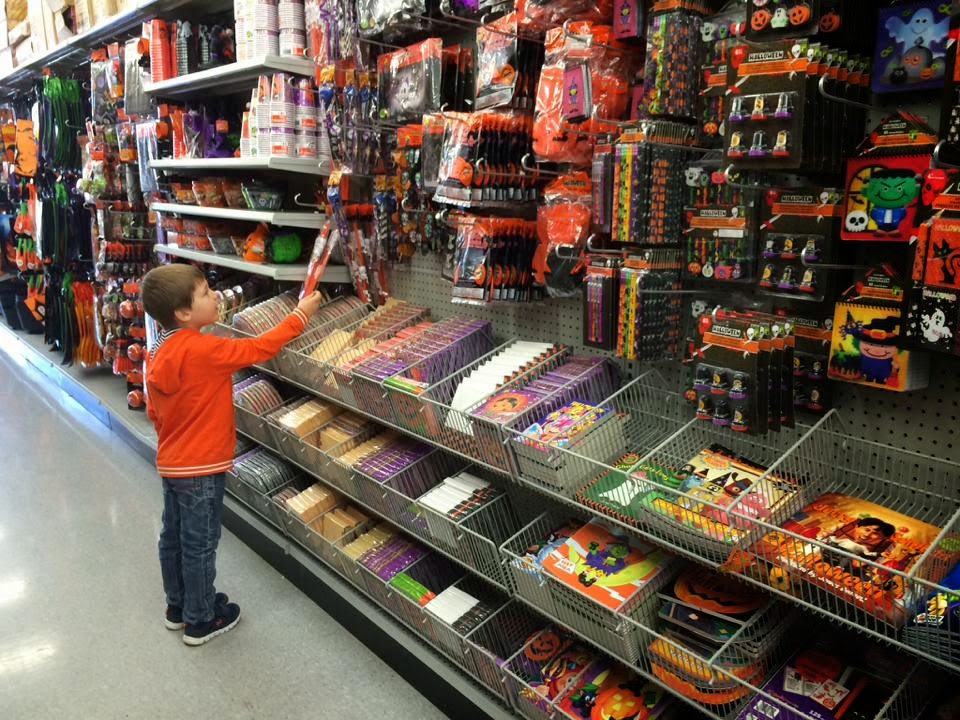 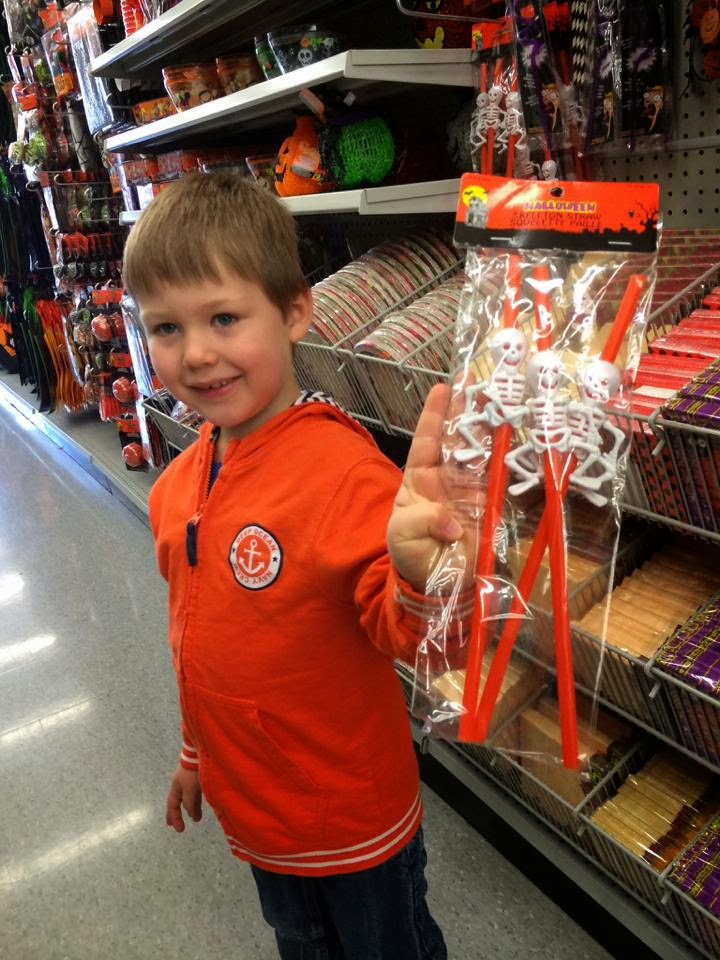 Then she took us to Canadian Tire.
We always thought this was a car accessories store. Turned out they have a hockey aisle! 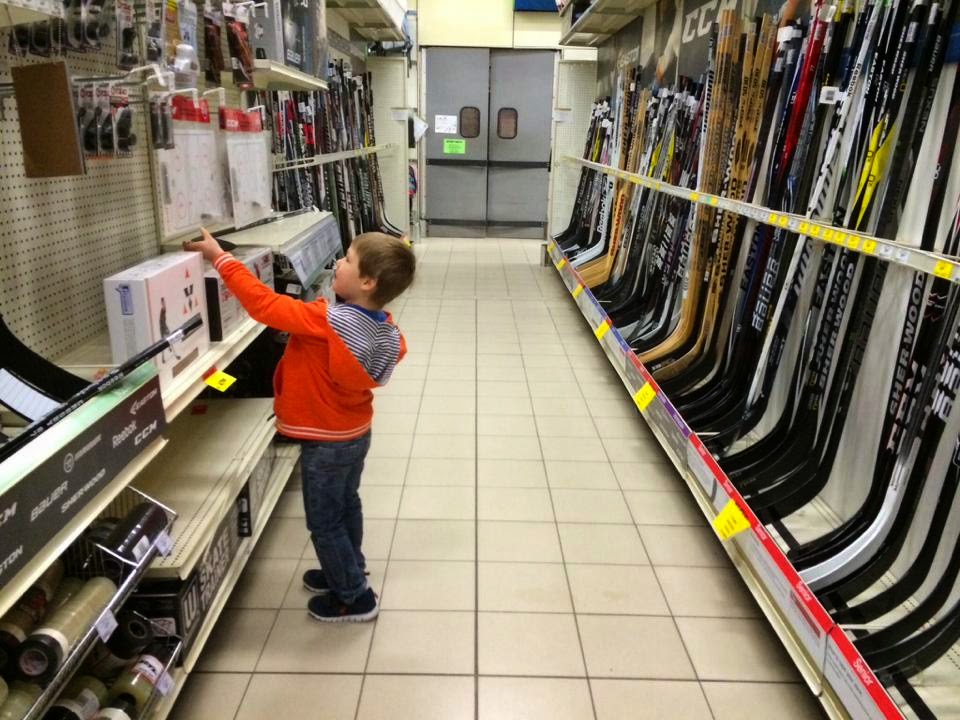 Before heading back Annette also wanted us to have some fun at Surplus Herbys craziest store in town. 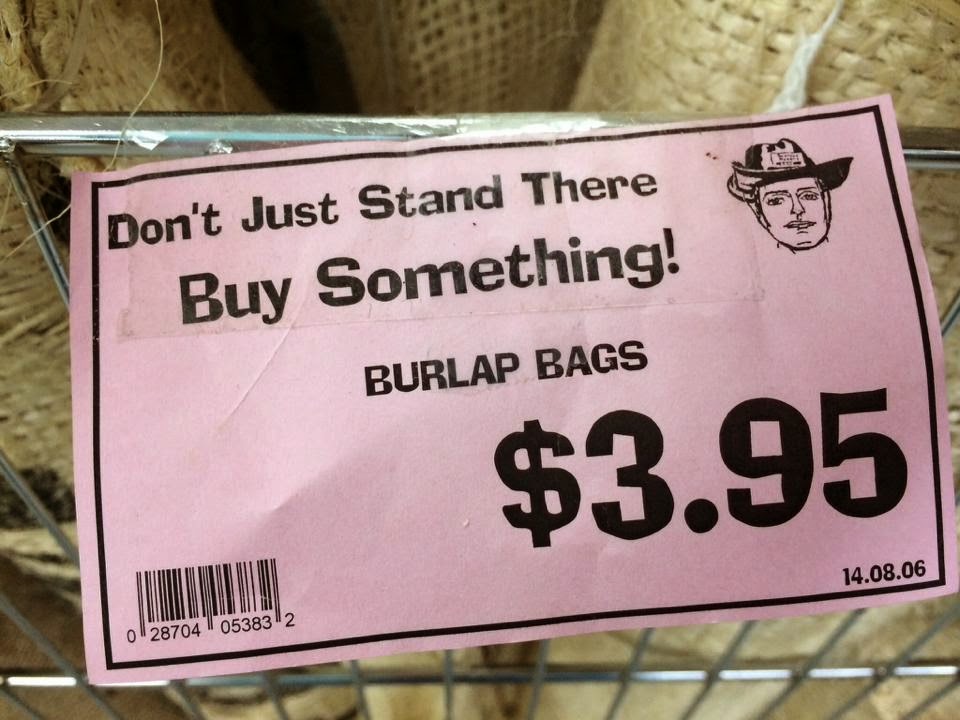 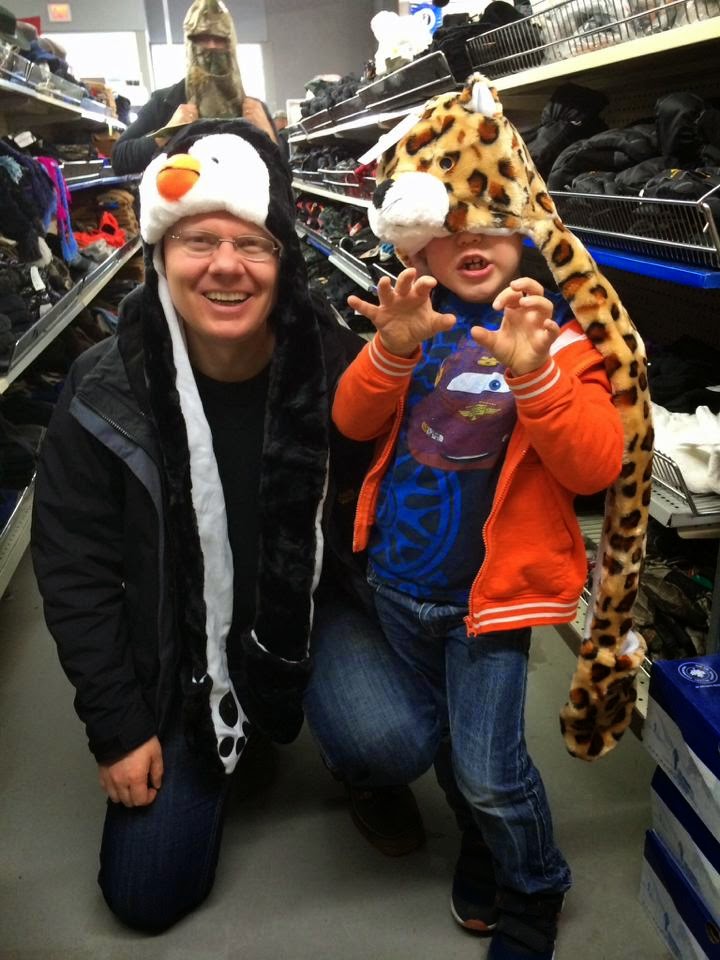 Back home Annette grabbed Kristin and took her to ballet class while we watched Paul doing his flash cards and reading a chapter in his book. Then the guys were free to run around outside. Not long, though. A bucket flew into Paul's mouth and knocked out a loose tooth. He didn't whine. Just the opposite, he was secretly cheering because he likes tooth fairy visits! 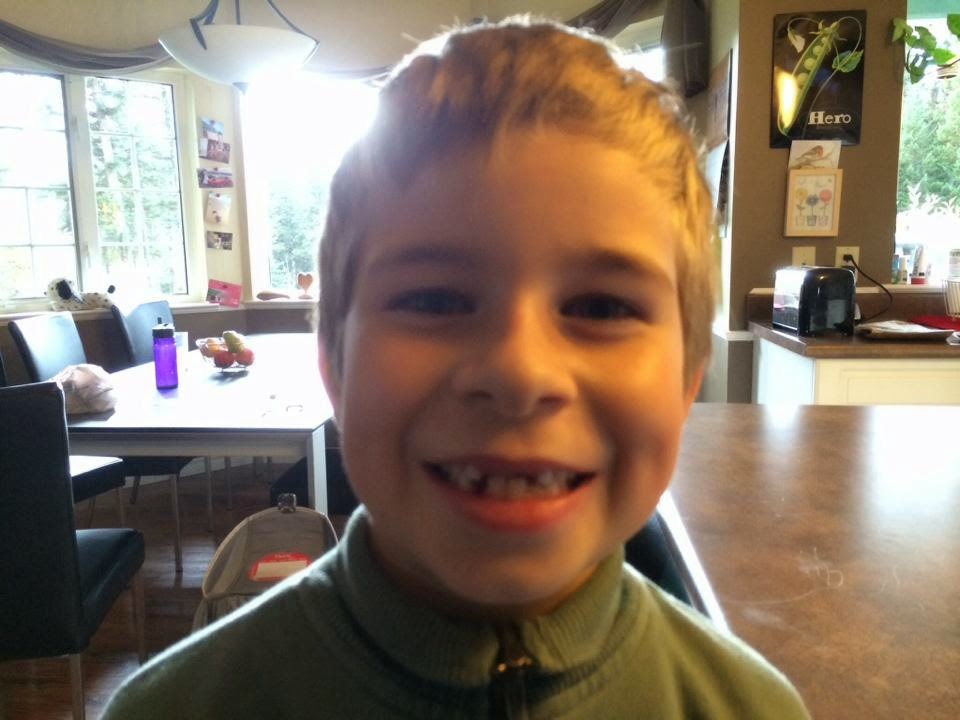 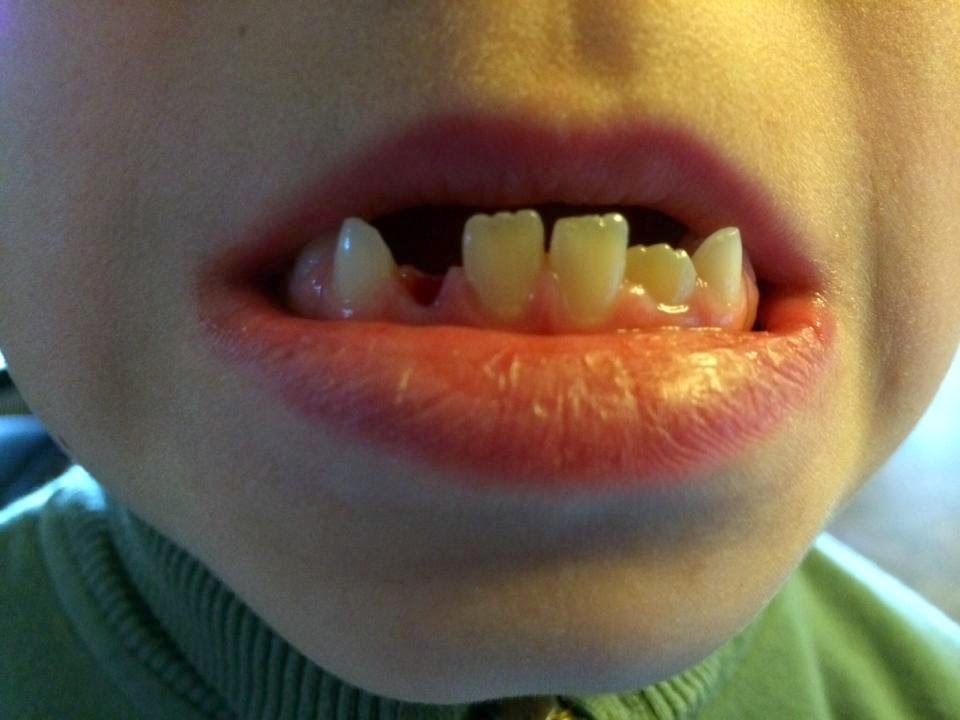 Next they came running into the house because there was a hail storm outside! 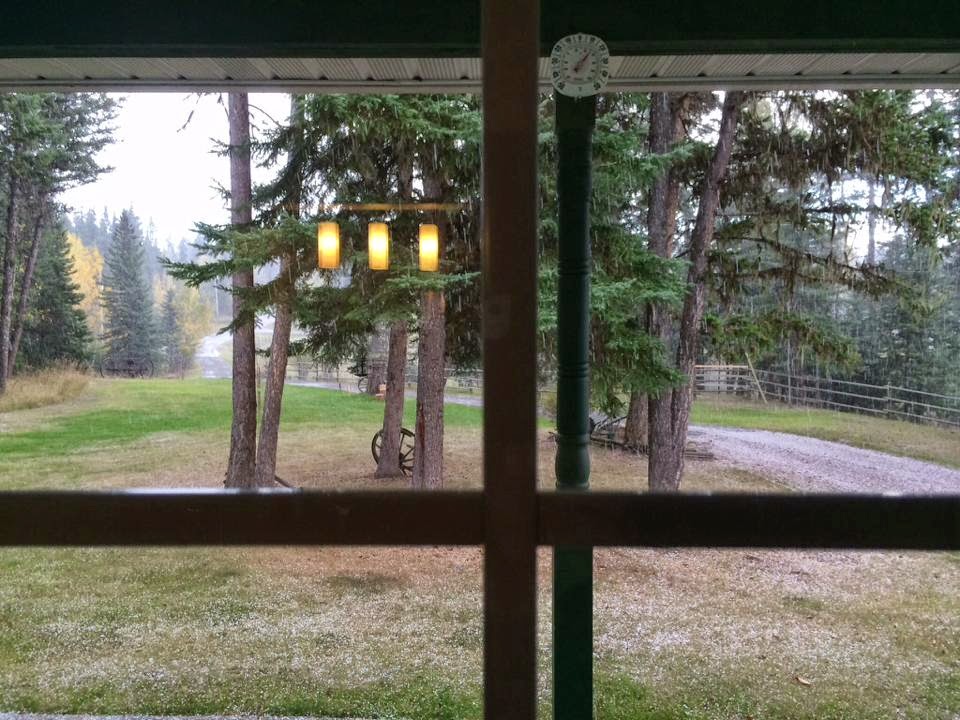 In the children's room they were playing peacefully... until we heard a panicky shrieking! Colin was bleeding and crying in horror! They had played with a pocket knife, and it went bad... 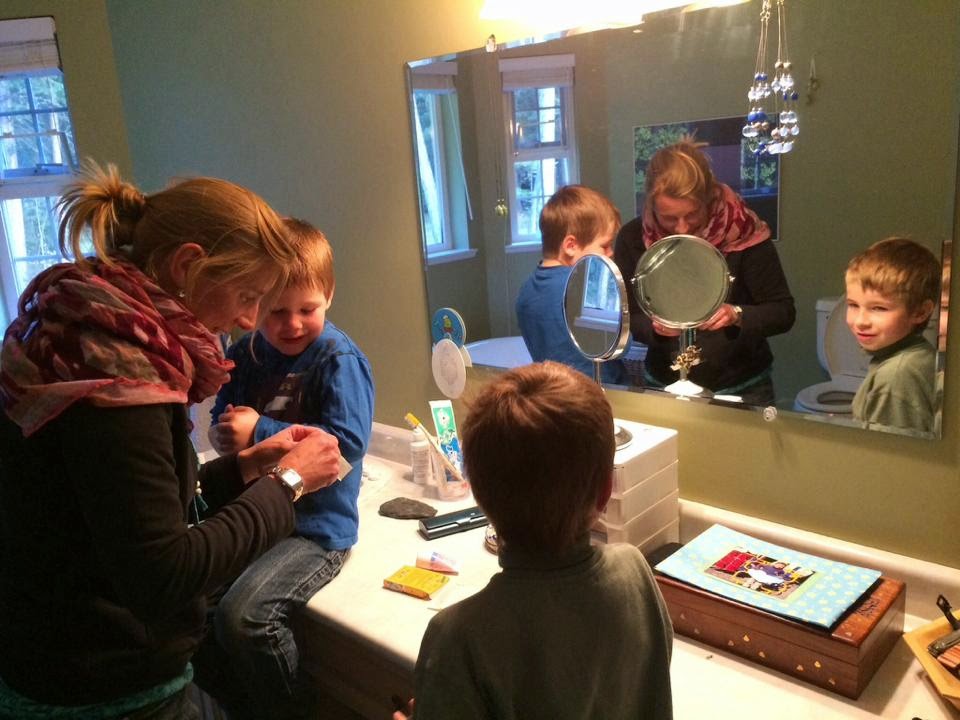 Dr. Fischer reacted promptly, cleaned out the wound and put a bandaid on it. It was only superficial. As I'm writing this, Dr. Fischer has transformed into chef Annette and is preparing baked potato wedges and burgers. Nice! Dinner is getting ready, so if you'll excuse me...