January 09, 2015
Welcome to January's Secret Subject Swap. Again 14 brave bloggers picked a secret subject for someone else and were assigned a secret subject to interpret in their own style. Today we are all simultaneously divulging our topics and submitting our posts. 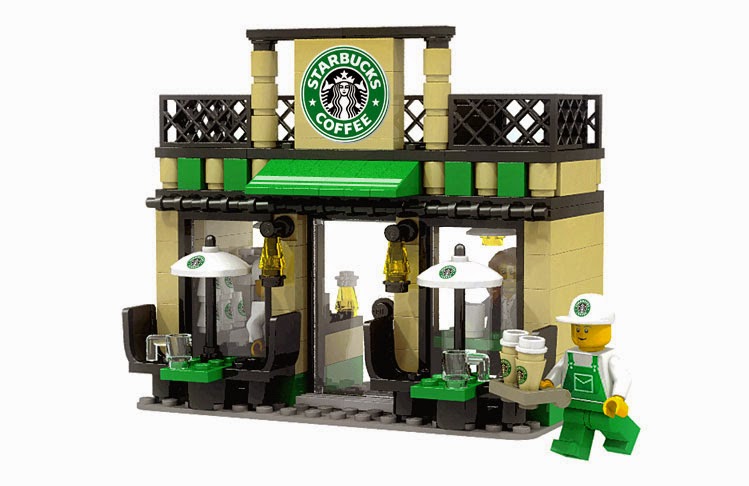 What was your favorite toy as a child?


It was submitted by Stacy Sews and Schools- thanks, Stacy!

I can tell you what my favorite toy would be today if I had it - that cool Lego Starbucks set above!

But let's rewind to my childhood.

I did love Lego! My brother and I had Lego streets, so we built a city. He was in charge of all the vehicles, and I built the houses and gardens and named the characters.

At Christmas and birthdays the ultimate test to determine if we were going to like a wrapped gift, was shaking the box. When there was this distinctive sound revealing it was Lego we ripped it open before anyone could say "take it easy!"

I also liked to play with dolls. I mainly did their hair. Once I painfully realized that dolls' hair didn't regrow I stopped cutting it. However I gave them "perms", tried out different hairdos, decorated it with jewelry, you get the picture.

When I was 9 or 10 I got disco roller skates that I loved. My girlfriend from the neighborhood had some, too, so weather permitting we were skating on the pavement, setting up road cones - they served as slalom poles - or just wore them, the skates, not the cones, sat down, chewed gum and chatted.

I liked to paint, draw, read, play Memory and other board games, but if I had to decide on my favorite, favorite toy I think it would be…

No, I'm not telling you just yet.

Instead you need to know that my parents had this 70s cabinet / rack thing that held the components of their stereo equipment, think record player, cassette tape deck, radio. The lower compartment stored vinyl discs, albums and singles. Kind of like this one here: 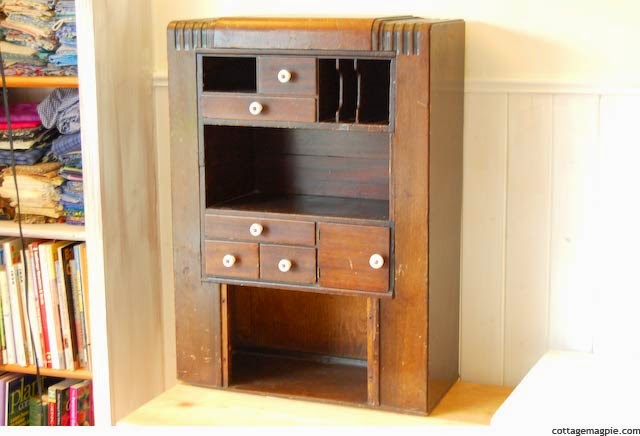 Now use your imagination - what does a stereo cabinet have to do with a girl's favorite toy?

It's not that I was allowed to play records on my own. Also the hippest music my parents were listening to back then probably was Neil Diamond.

That rack became my doll house! The record compartment served as a parking garage for my wooden convertible car, comparable to this one, only mine had four seats. 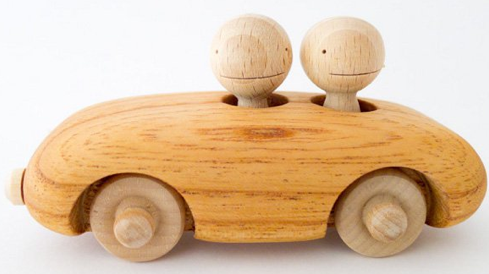 The other compartments were rooms. Kitchen, living room, playroom, bedrooms,… I don't think I had much real furniture. I made my own using Lego, cardboard boxes and other packaging items that I painted.

I wish taking pictures wasn't restricted to holidays and vacation back then, so I could show it to you!

Here are a couple of other pictures that I found, thanks to my Mom who put together a binder with important childhood memorabilia. My first school schedule, field trips, a list of books I read in second grade.

Cute. Colin is going through it as I write. He is impressed to see me in a newspaper article. I didn't write it, I went to a book signing by my favorite author, and the picture they took shows the author and me plus some extras.

I played house. I was a SAHM taking her two kids - a boy and a girl - to school, going groceries shopping, cooking… Sometimes there were playdates and birthday parties, and I drove back and forth to pick up my children's friends. You remember, my car had four seats only. And my kids were popular!

I can't remember if I did laundry, too. Everything else was pretty much the way it is today, except I didn't have an office job. It was the 70s, and none of my friends' mothers had a job outside the house.

Let me comment on this picture I drew when I was about 8 years old. It shows the difference between country and city life, obviously. 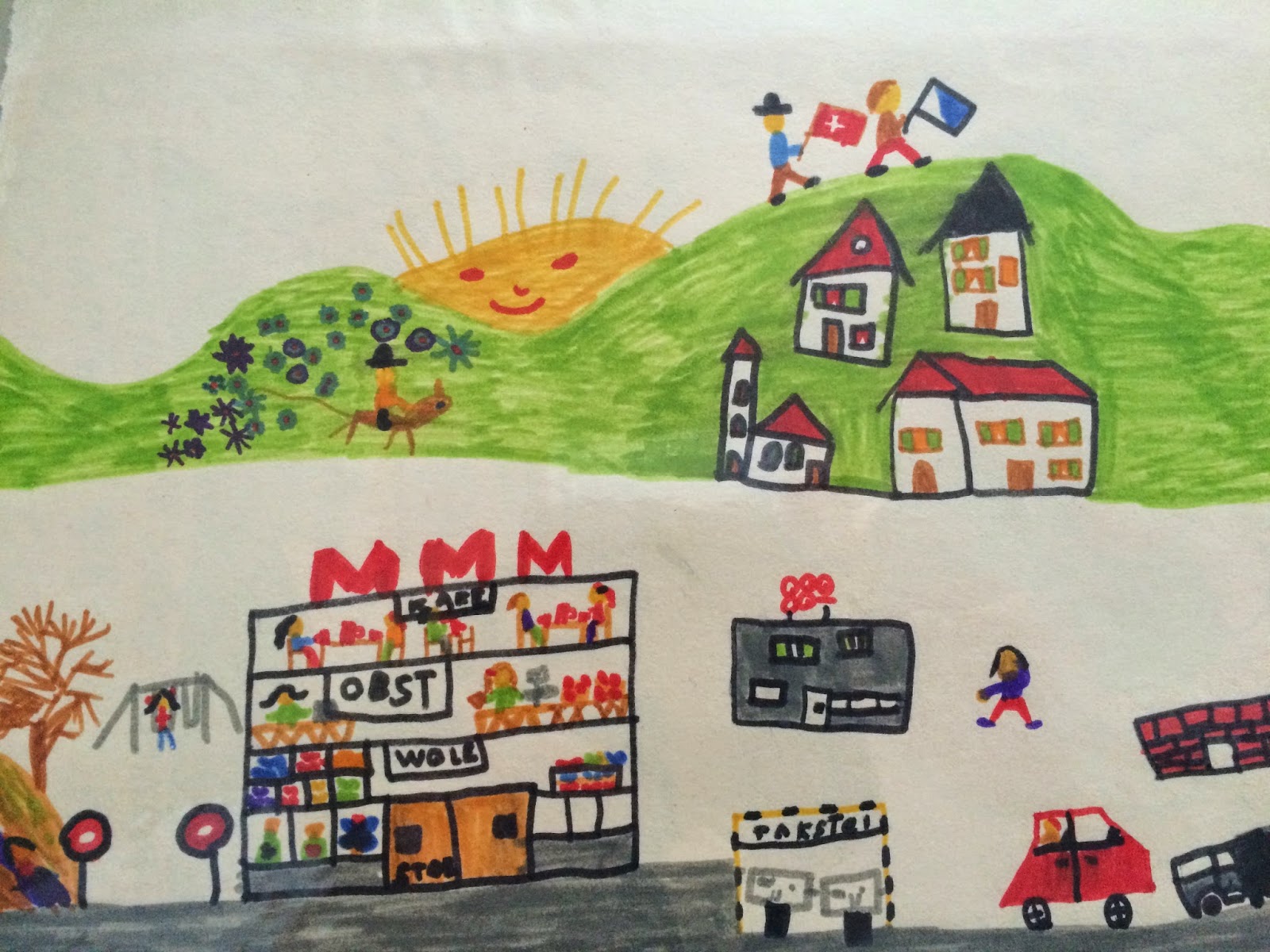 There's also a church in the mountains. I liked to draw churches, I have many more paintings of churches. I guess I preferred to sketch them instead of going there. The sun is shining, the flowers are blooming. No chirping birds, though.

The most important building is a triple M supermarket with a restaurant on the top floor, fruit on the third and wool (Why? I have no idea!!!) on the second.

I still like to shop there, btw. In Switzerland we have two main supermarket chains, Migros and Coop. Both holding a little over a third of the market share, Migros being a tiny little ahead in sales. Note how small Coop is in my picture.

8yo me thought of a gas station for the cars. No parking lot, though. Where are the cars supposed to go, certainly not to the playground area! Maybe there's too much traffic in that city as it is. The poor tree doesn't have any leaves.

Colin immediately noticed that the hiker's white and blue flag representing the canton of Zurich was all wrong. It's supposed to be this way, for the record, hahaha!

Speaking of Colin, he was playing catering while I blogged. With his green Lego delivery truck he brought baked goods, specifically Lego (cup) cakes! The colorful paper stripes on the floor are toy money he made, so I could pay for my food! He also does pizza deliveries, along with wine :-) 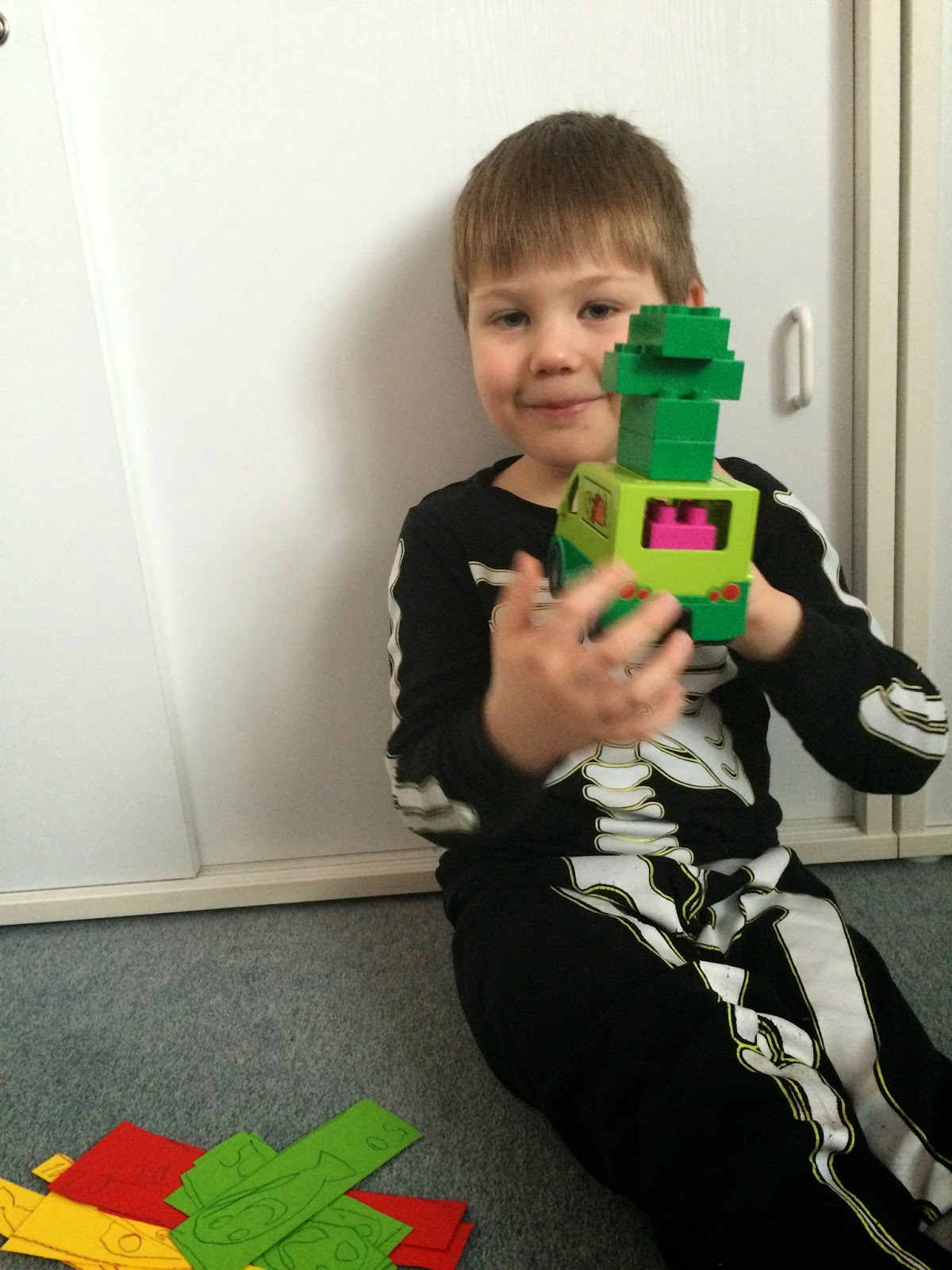 Conclusion: No matter if it's the 1970s or the 2010s, basically the same thing applies: Lego, a couple of paper sheets, an old piece of furniture and a vivid imagination make for great playing memories!

What was your favorite toy back then?