February 15, 2015
I know I'm repeating myself. In terms of celebrating non-Christian holidays, living in Switzerland equals living under a rock.

There are basically the following holidays that notably exist around here:

You can see where this is going. Valentine's Day, St. Patrick's Day, Thanksgiving and Halloween - oh, and of course the Elf on the Shelf - are non-existent or negligible at best. 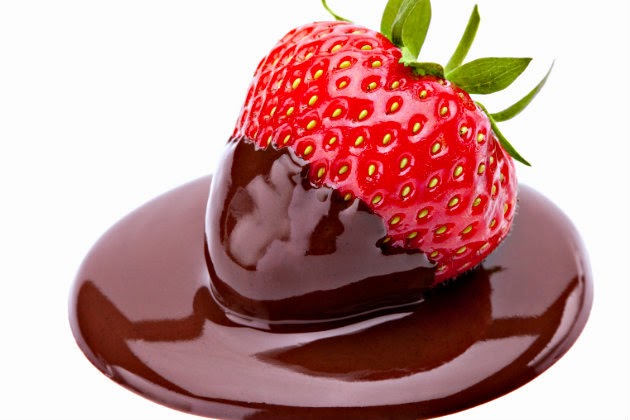 Still I thought I'd list the top ten indicators that Valentine's Day is in fact happening around here:

I was browsing stationary departments for wrapping paper. Something with a couple of hearts, please? Anywhere? No? This is so lame. Sales people were directing me toward the sturdy plain packaging paper. The one that people use to line their cupboards. "We carry them in red as well." No thanks. 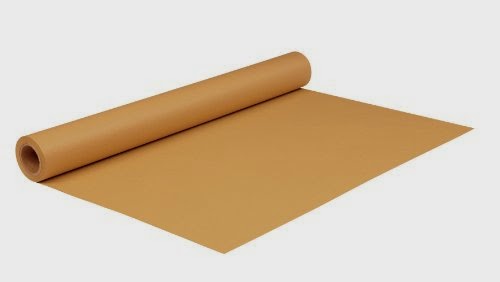 Lately I have been thinking about what I am going to do job-wise when C gets older. That's it! I am going to be Switzerland's holiday retail ambassador or something! Product Manager for pink. red, green and orange holiday items! While I'm at it I'll also obtain a free import license - if it doesn't already exist I'll have to introduce it - so our country can source graham and peanut butter crackers, BBQ chips, pumpkin puree and the like.

Until then I'll be spending a fortune ordering online.

But let me tell you about our very Swiss Valentine's weekend. 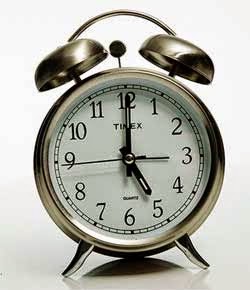 Colin: "Moooom? I mean, good morning, dear Mommy!" (Did I train him well or what?)
Me: "Hi, sweets, I'm still very sleepy!"
Colin: "I was wondering when you are going to come through on your promise?"
Me: "Huh?"
Colin: "You know? The car? The one I was not supposed to talk about? We saw it at the toy store a while ago, and you bought it, and you told me I wasn't gonna get it until V-Day?"
(I can't believe he remembered. I didn't even get round to wrap it. Lack of wrapping paper, see above!)
Husband: "What are you talking about, today isn't Valentine's Day?"
Colin: "Of course it is, duh!! Yesterday was Friday, February 13th, so usually the next day is the 14th, and February 14 is V-Day, ta-daaa!" There was most probably some eye rolling. I didn't see. I kept my eyes closed.
Husband: "Ooohps! Indeed. Wow. Today…" Then he went to take a shower, got dressed and left for the office. 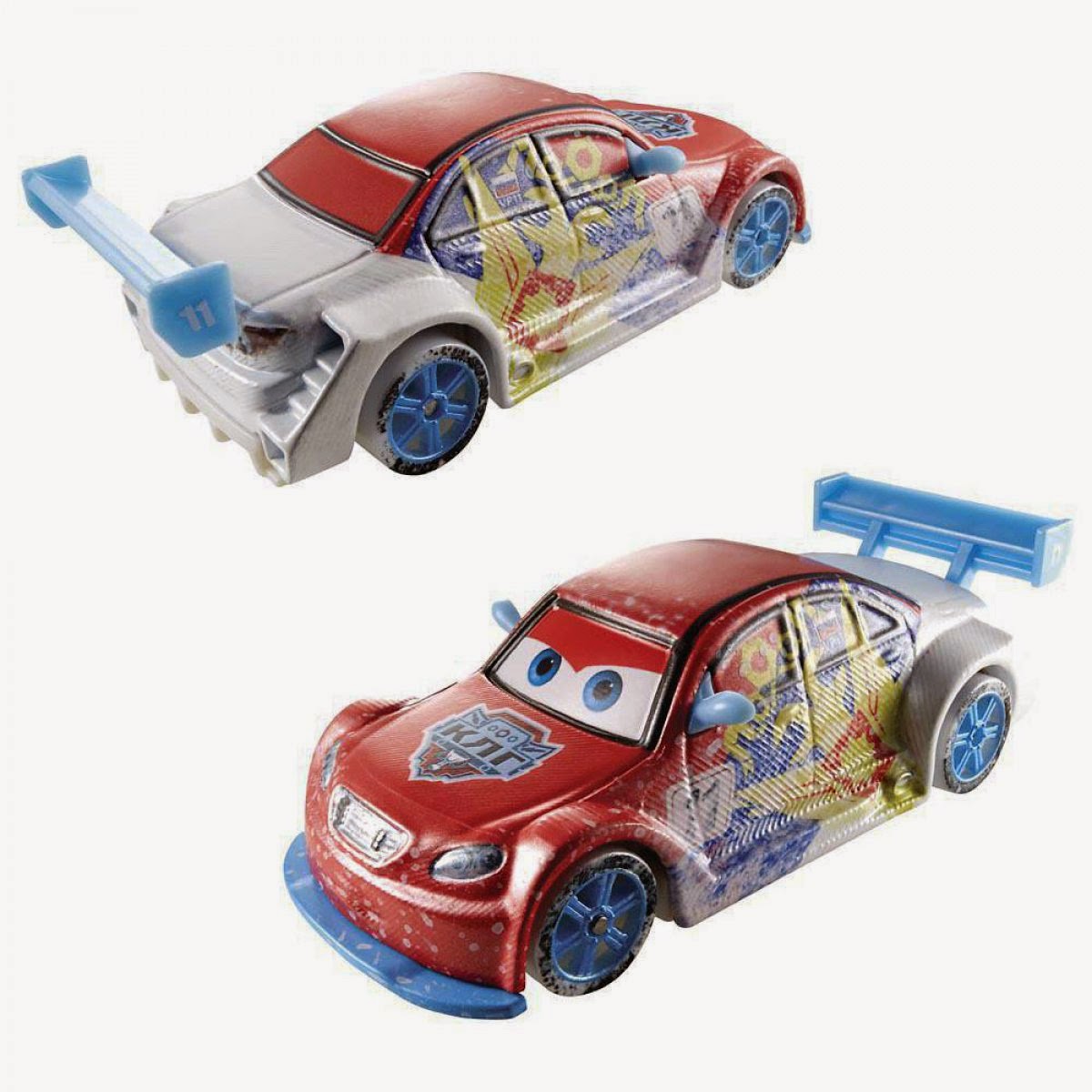 C and I were going to meet his friend for the local carnival parade later, and I didn't feel like going grocery shopping and cooking before leaving, so instead I took him on a surprise lunch date: 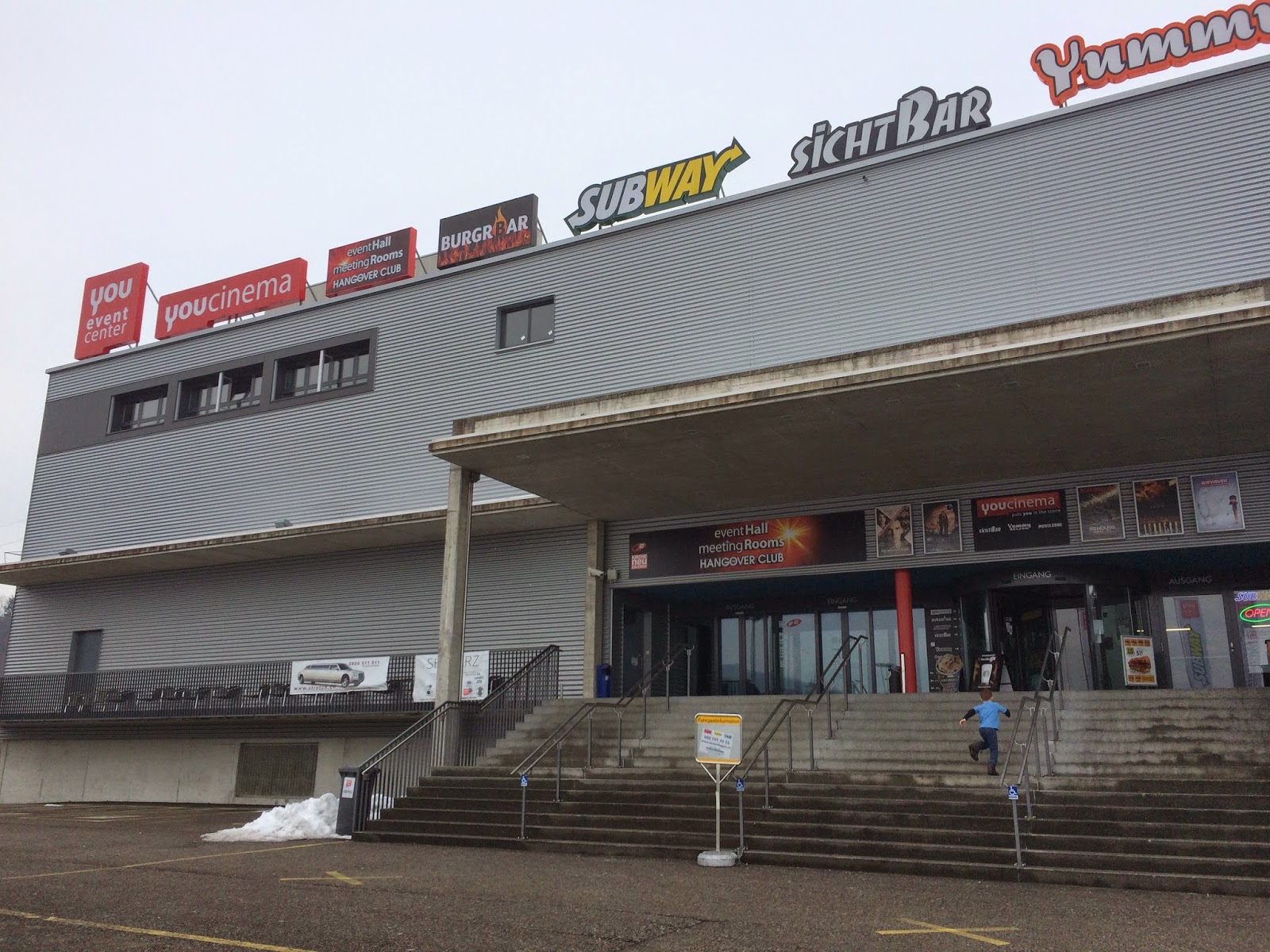 It's not a mall. It's a movie theater where for some reason Subway is open outside movie showtimes.
C likes to put together his own sandwich. He even does it in the U.S. - in English -  and he was inspired by a commercial we keep seeing when we watch NHL hockey games. (In case you're wondering if Swiss TV broadcasts NHL games. Of course not. We stream them from the NHL app we purchased. Best spent money!)

So in he marched and asked for "white chicken". The girl was like "huh?" He showed her. Ha, yes, this one was looking white and taste-less all right ;-)

He also added salami and threw in some ham for good measure. Sliced cheese, shredded cheese, tomatoes, fresh cucumber, pickled cucumber, olives… He went all the way, and he cracked me up!

Are you going to eat all this? Of course! 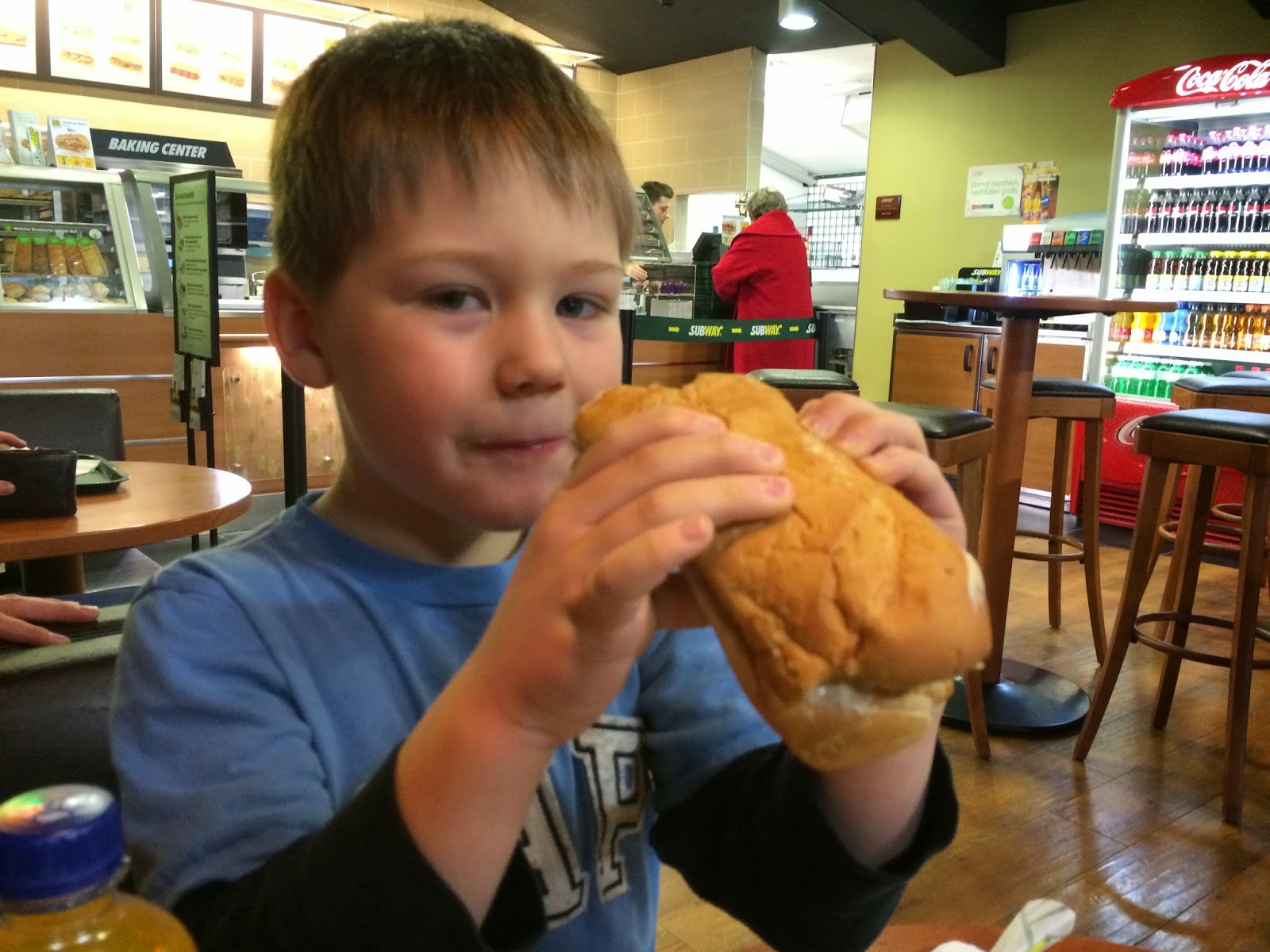 When I asked him in January (with enough time to make or buy something) what costume he wanted to wear at the carnival parade, he said "just my skeleton". That was easy. Halloween box, done!

One day prior to the parade he heard about his girlfriend and her sister being Native American Squaws. "Wouldn't it be cool if I were to wear a matching costume?" he asked at bedtime. Grrrrr!

Wait! Two years ago I purchased one for him that was the smallest boy's size but still a bit too large for him back then. With any luck I could squeeze him into that. If I could find it in the attic, that is!

Ta-daaa! It was probably going to tear upon removal, but who cares? 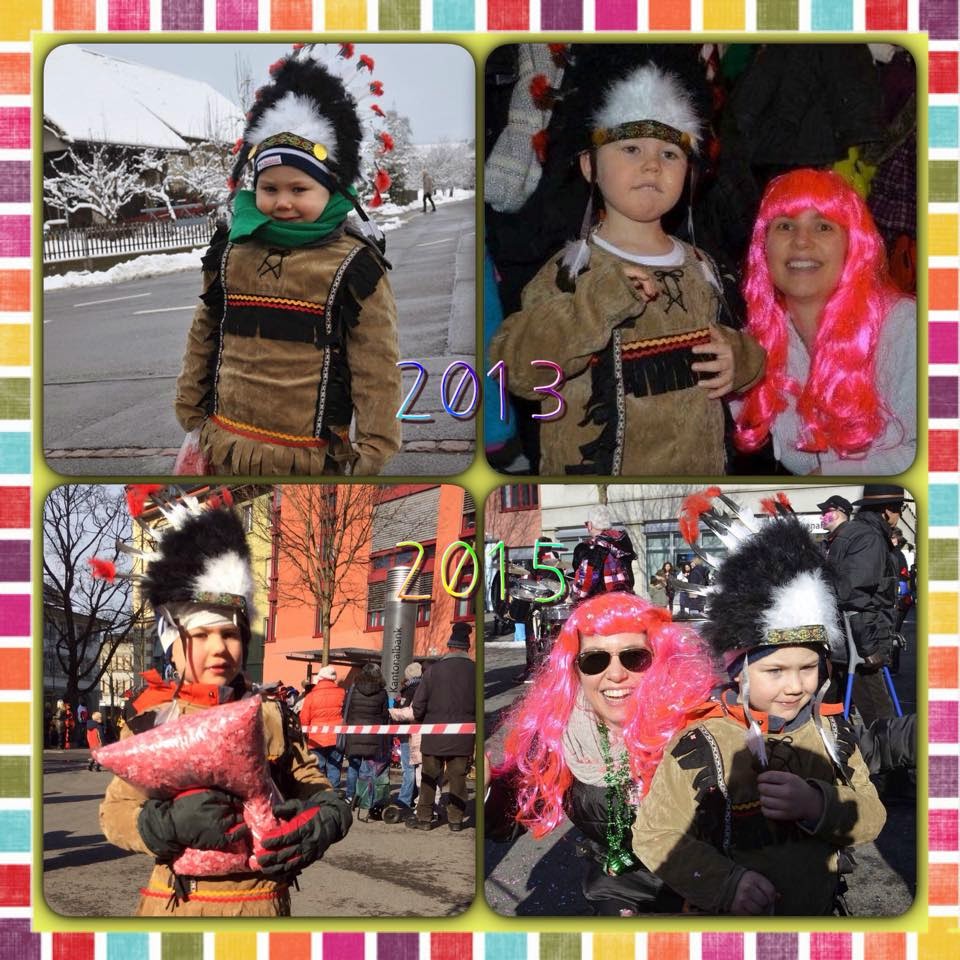 His buddy Eric dressed up as a pirate, the sun was shining unexpectedly, and we had great fun! 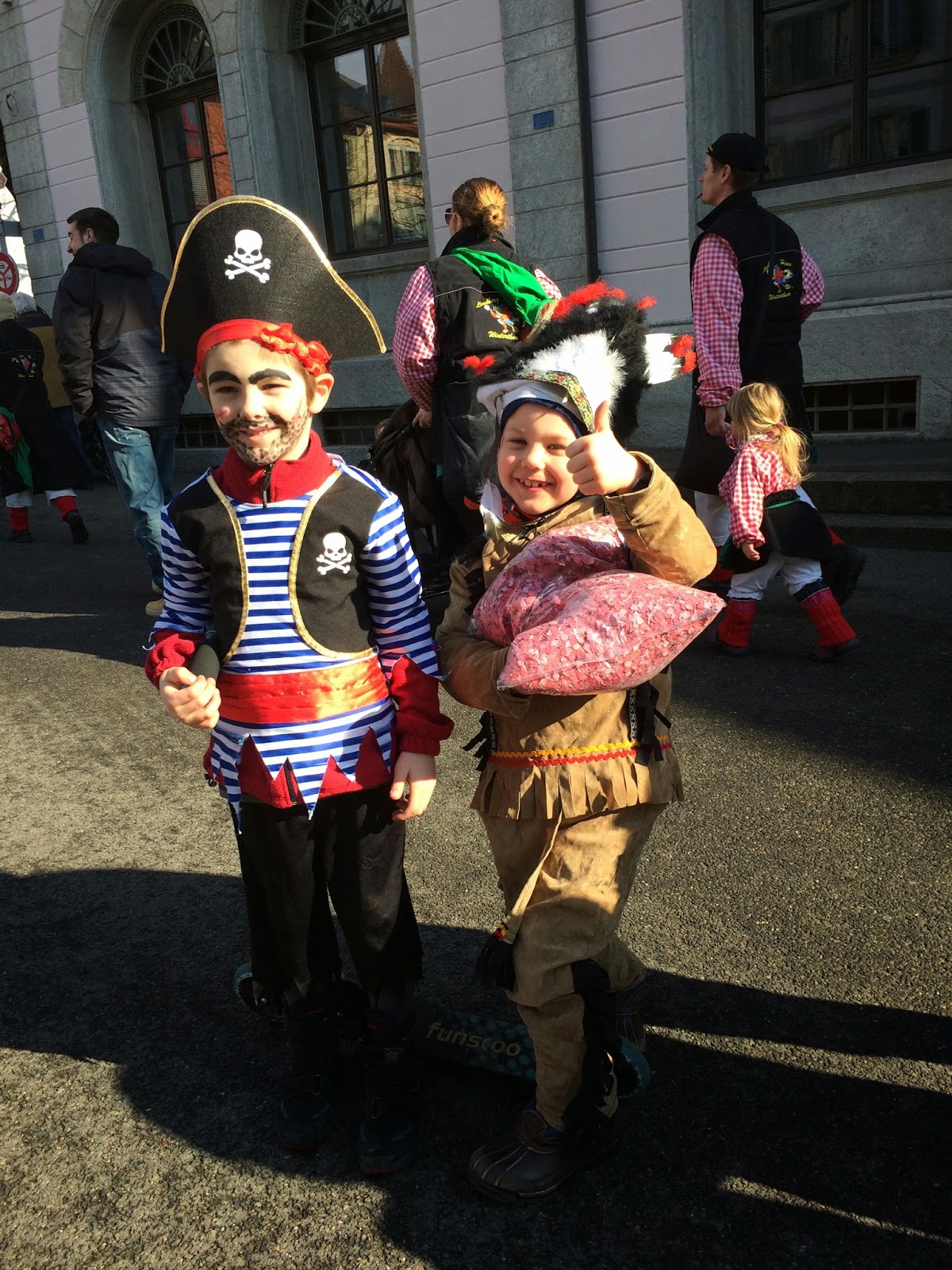 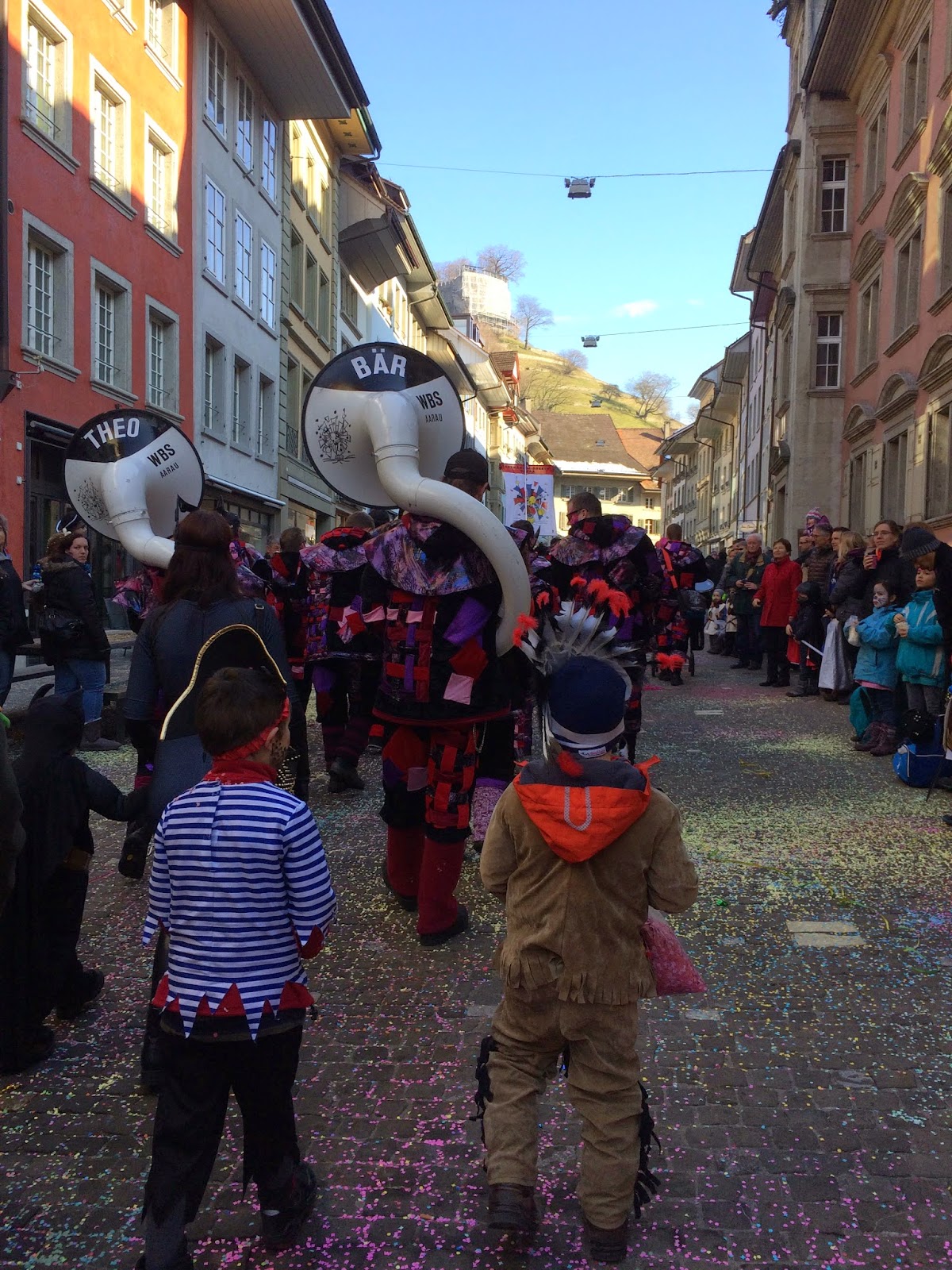 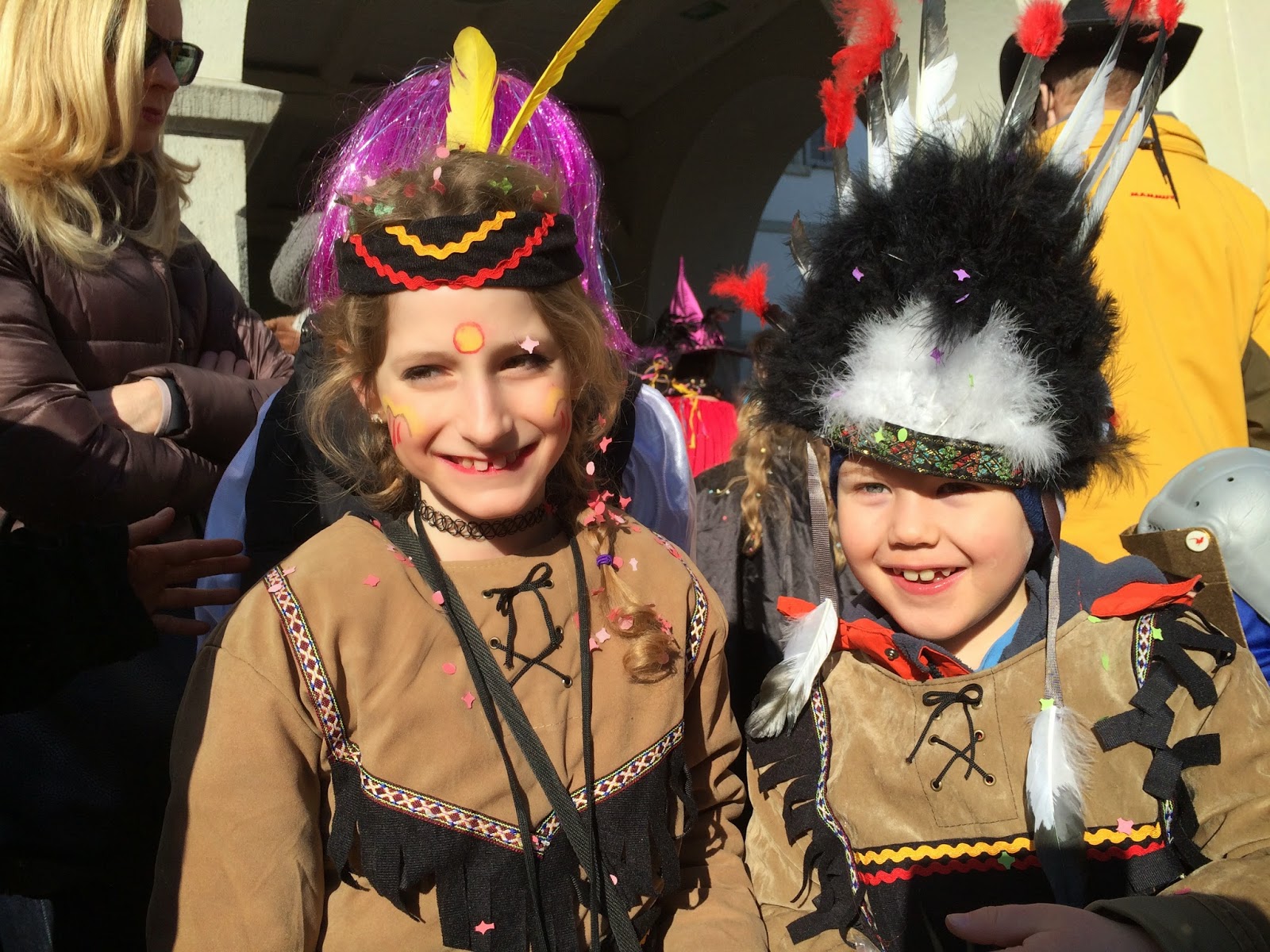 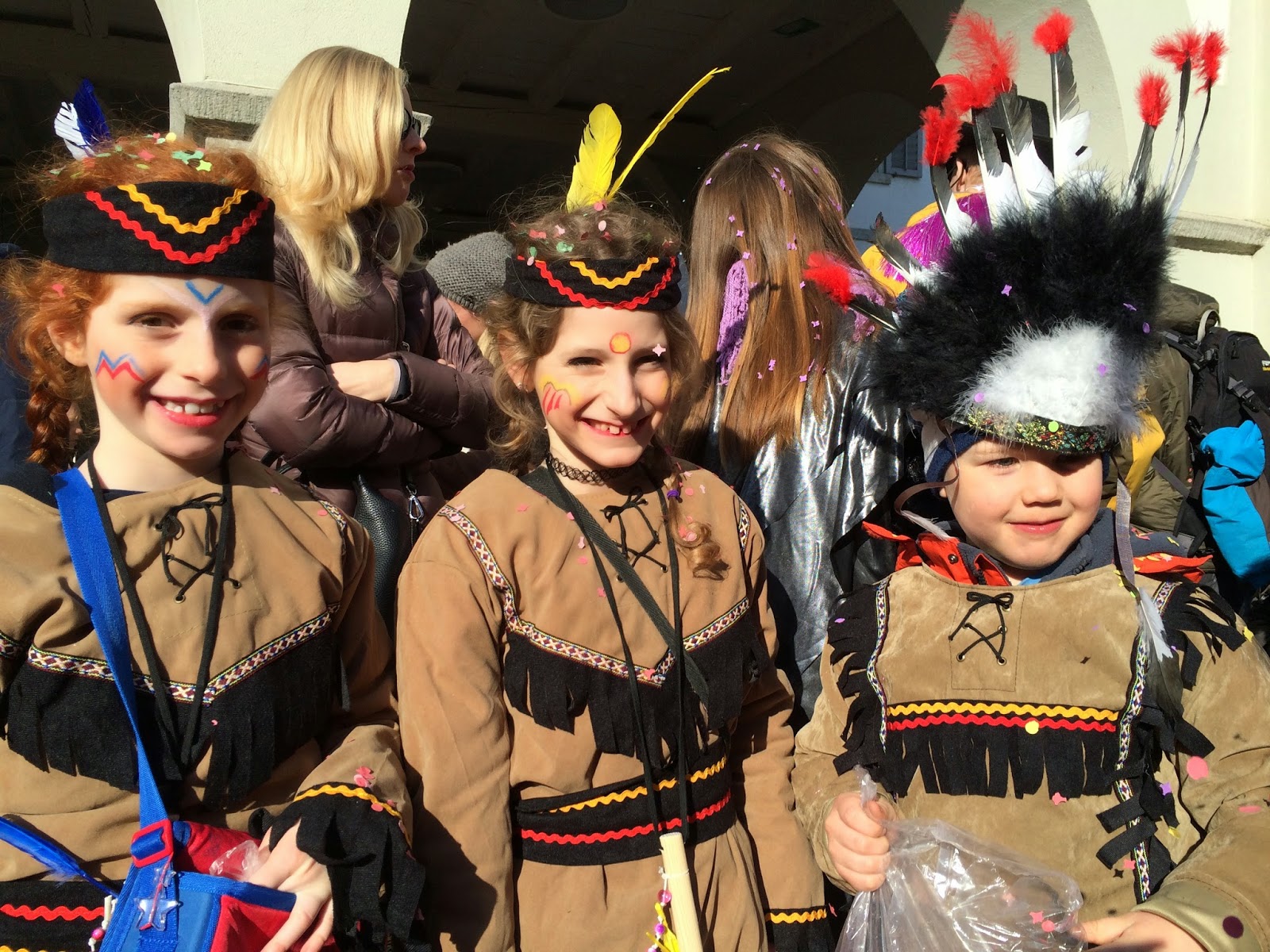 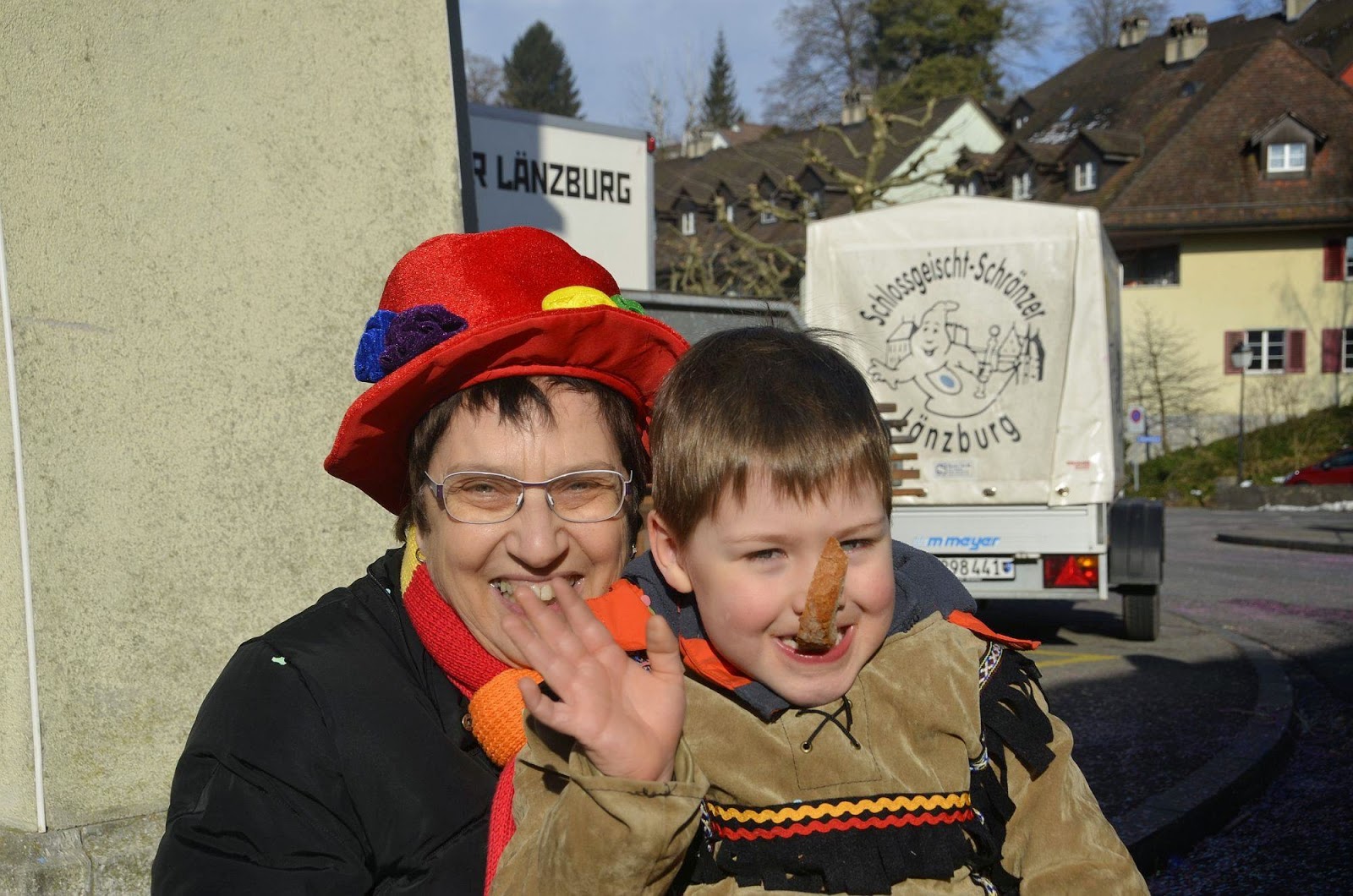 Eric's parents and I felt like going to the pub for a beer / some sparkling wine. The kids felt like going to either home to play. Solution: our place! We usually don't have beer in our fridge, but from my beer bread making days there was a Guinness left! Also the last time we met we didn't empty all the Prosecco bottles D brought, so the sparkling part was covered as well. 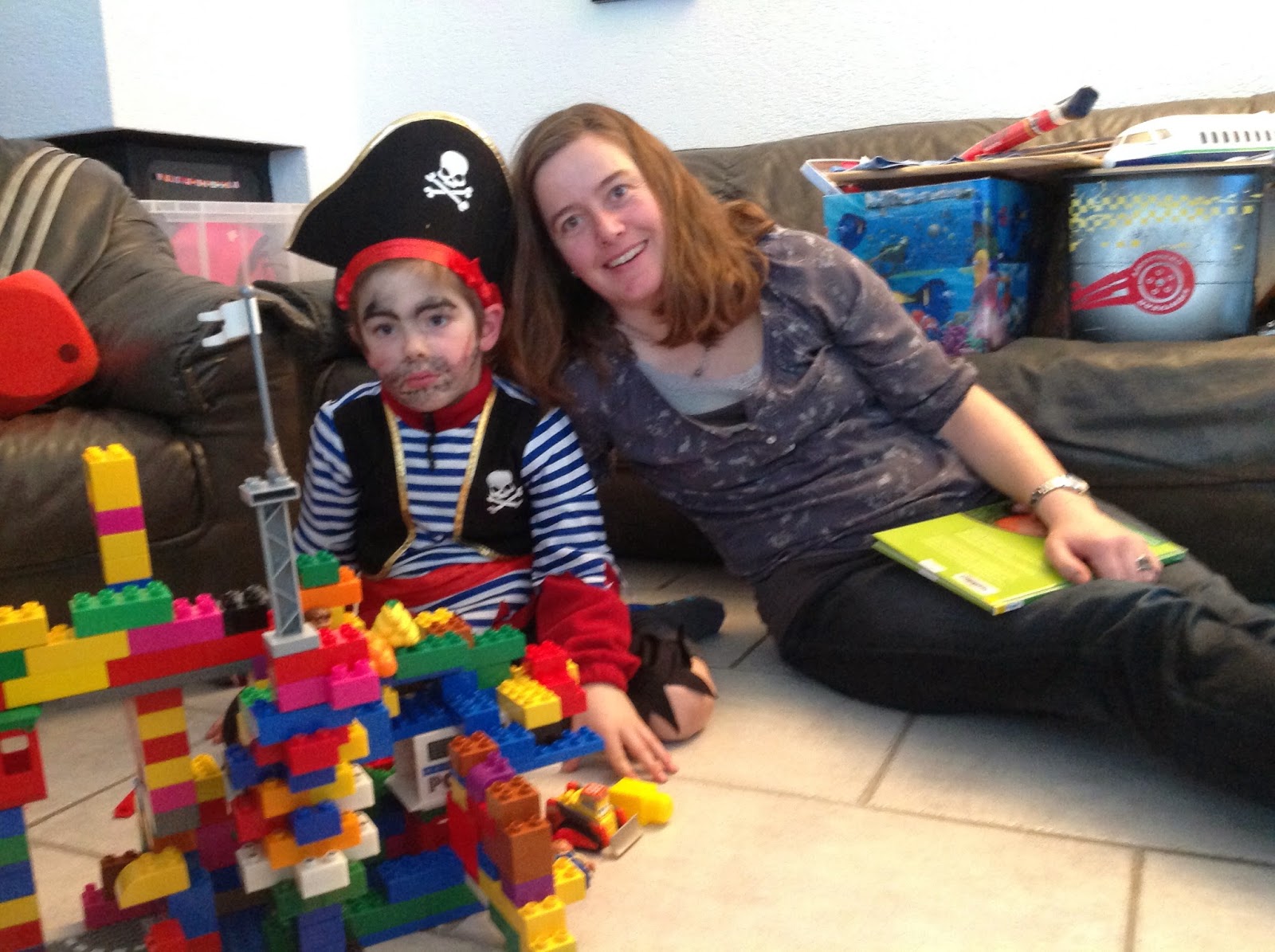 By the time hubs came home from work I wasn't feeling like cleaning up and starting to make dinner and was just tipsy enough not to care about it anyway. He was quite amused and probably grateful for his opportunity to announce "Let me take you out for dinner. After all it's Valentine's Day!"

And that's how we ended up at our favorite Italian restaurant, no reservation needed - because, Switzerland - for some pasta and mineral water.

Eric told Colin that the next day he would be playing his very first soccer tournament. Of course we had to see this! 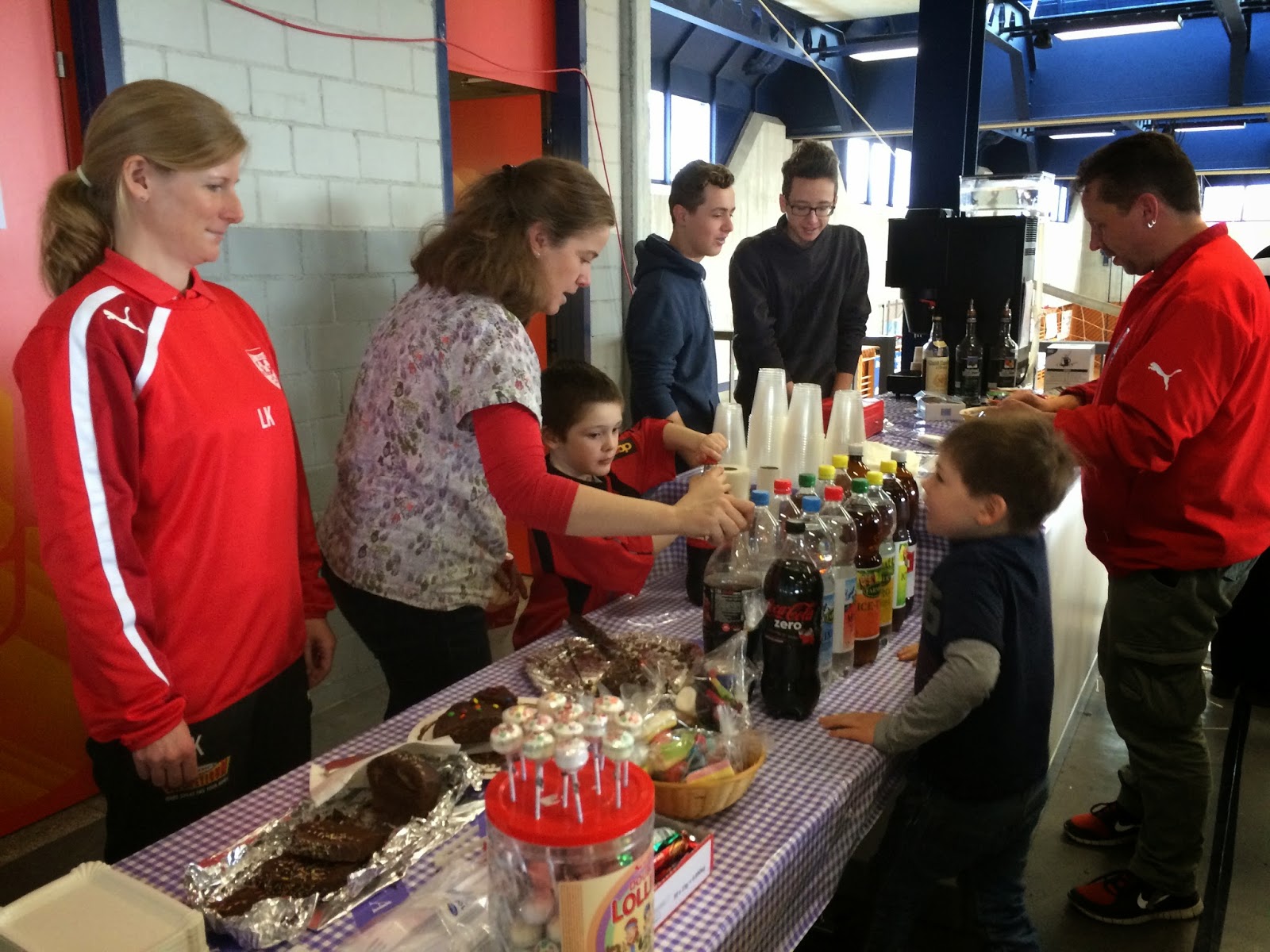 Mr E was working the buffet, too! 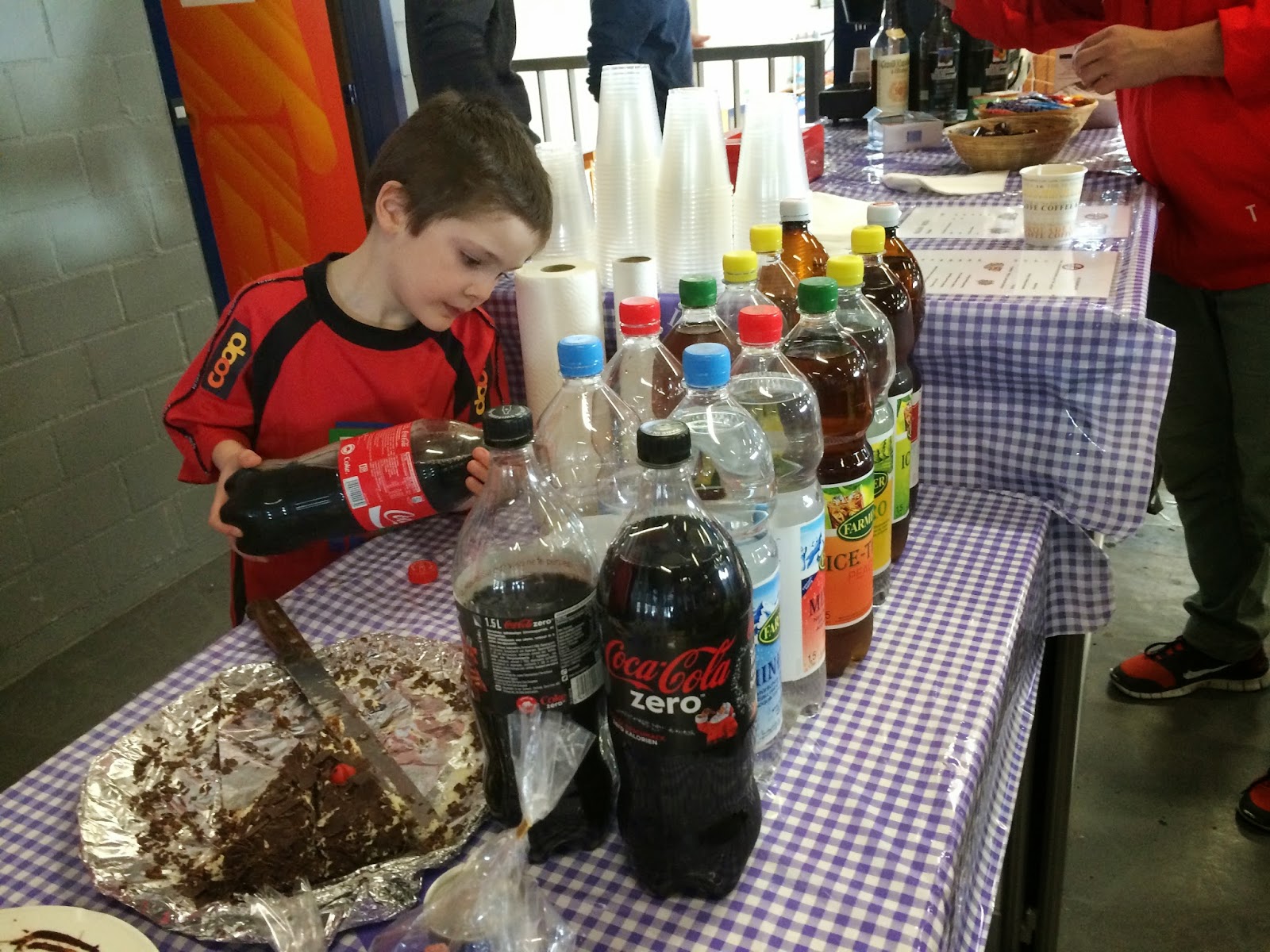 I hate to say it, but he was more successful in serving beverages than scoring :-( 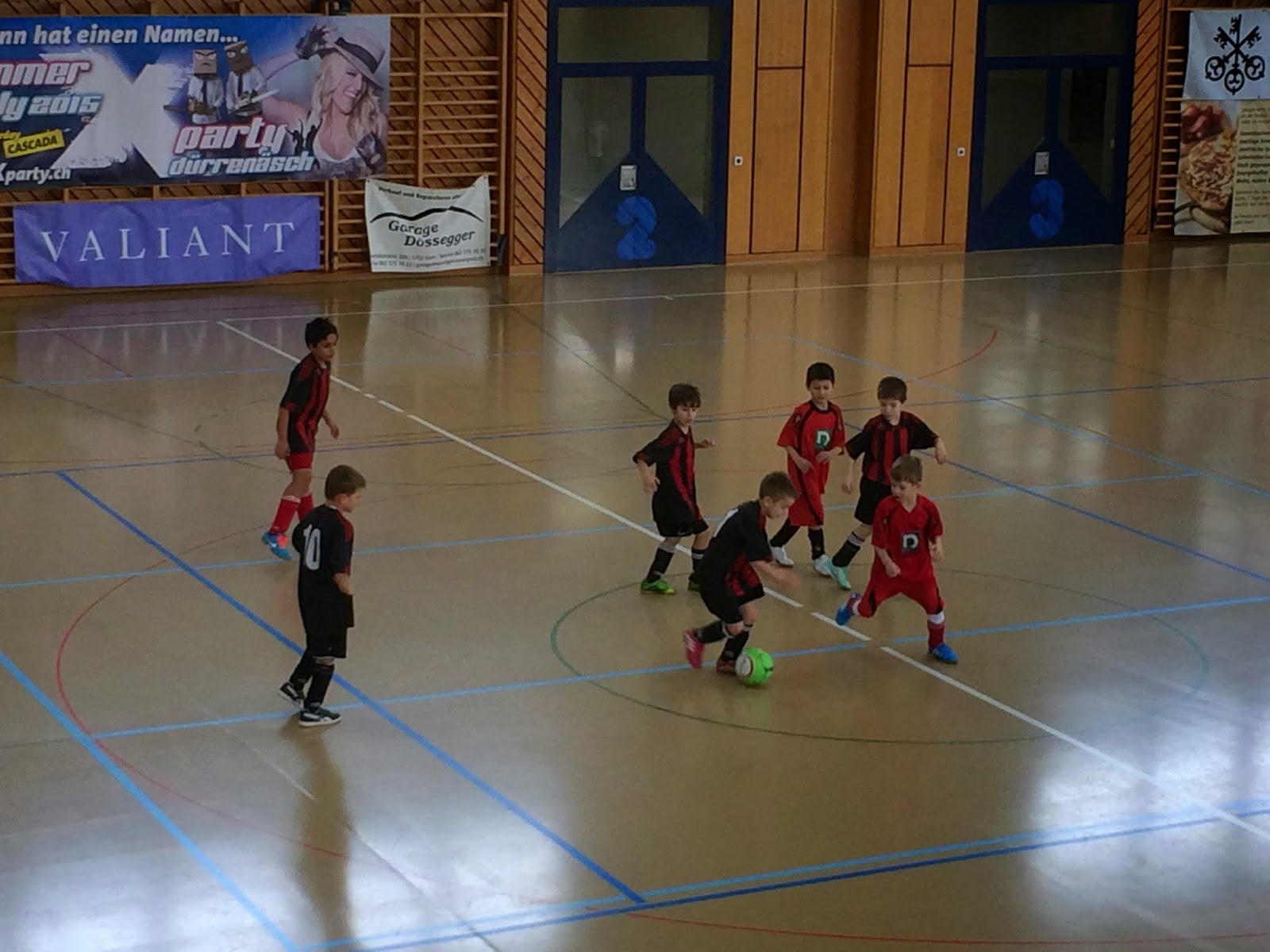 Even though he had the largest and loudest fan crowd! 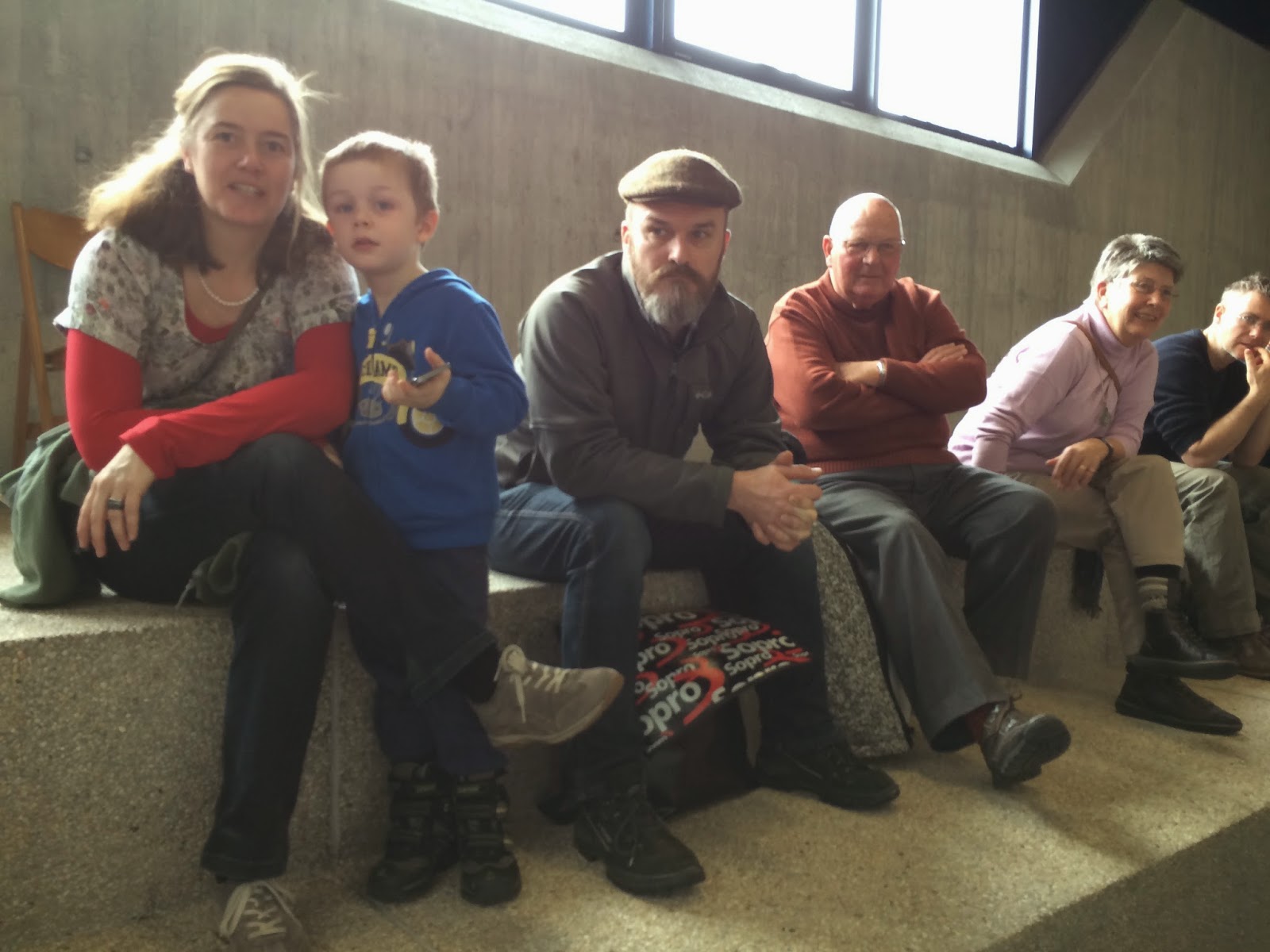 Bummed to be losing all the games 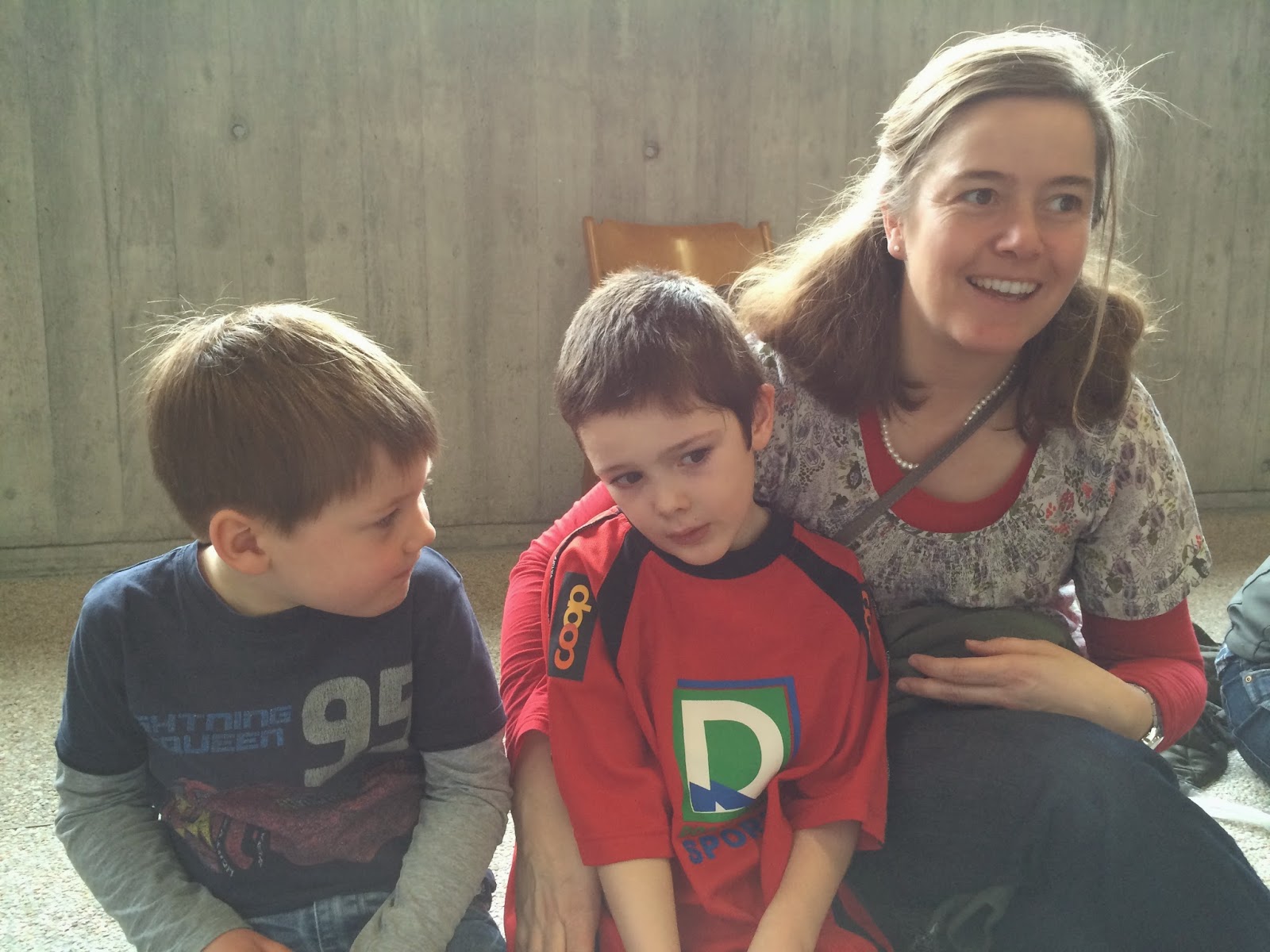 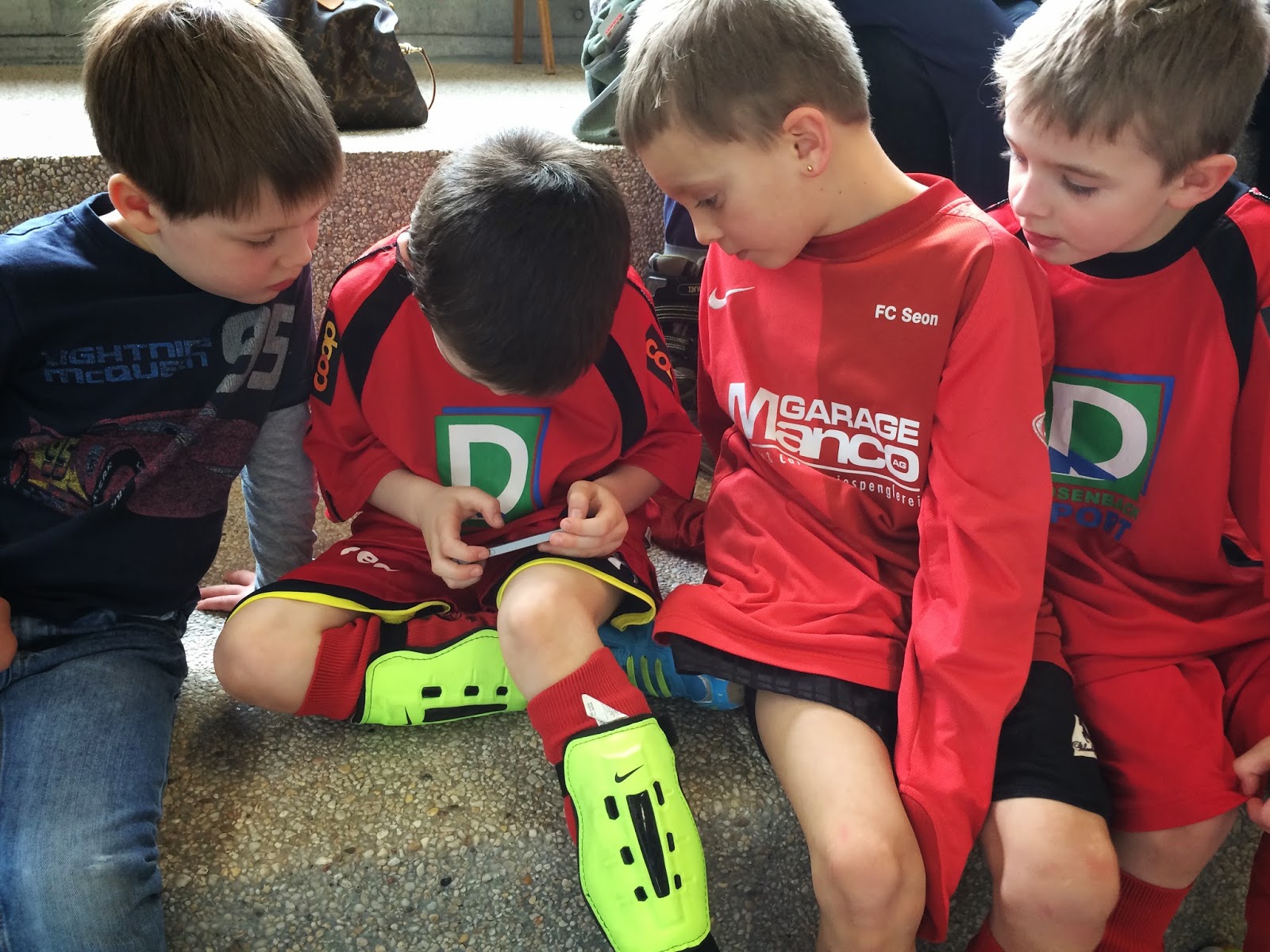 In the end every participant got a shiny medal! 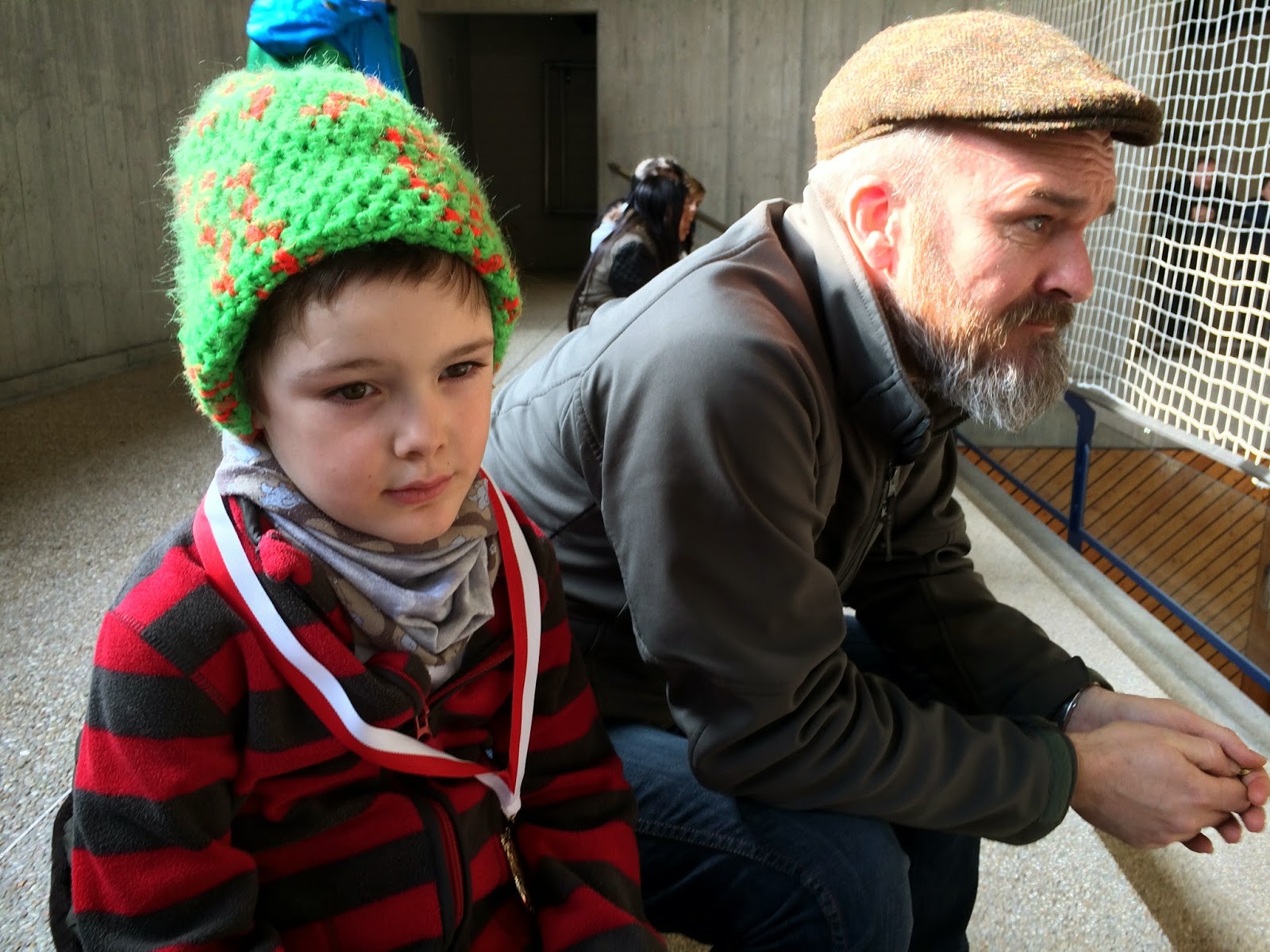 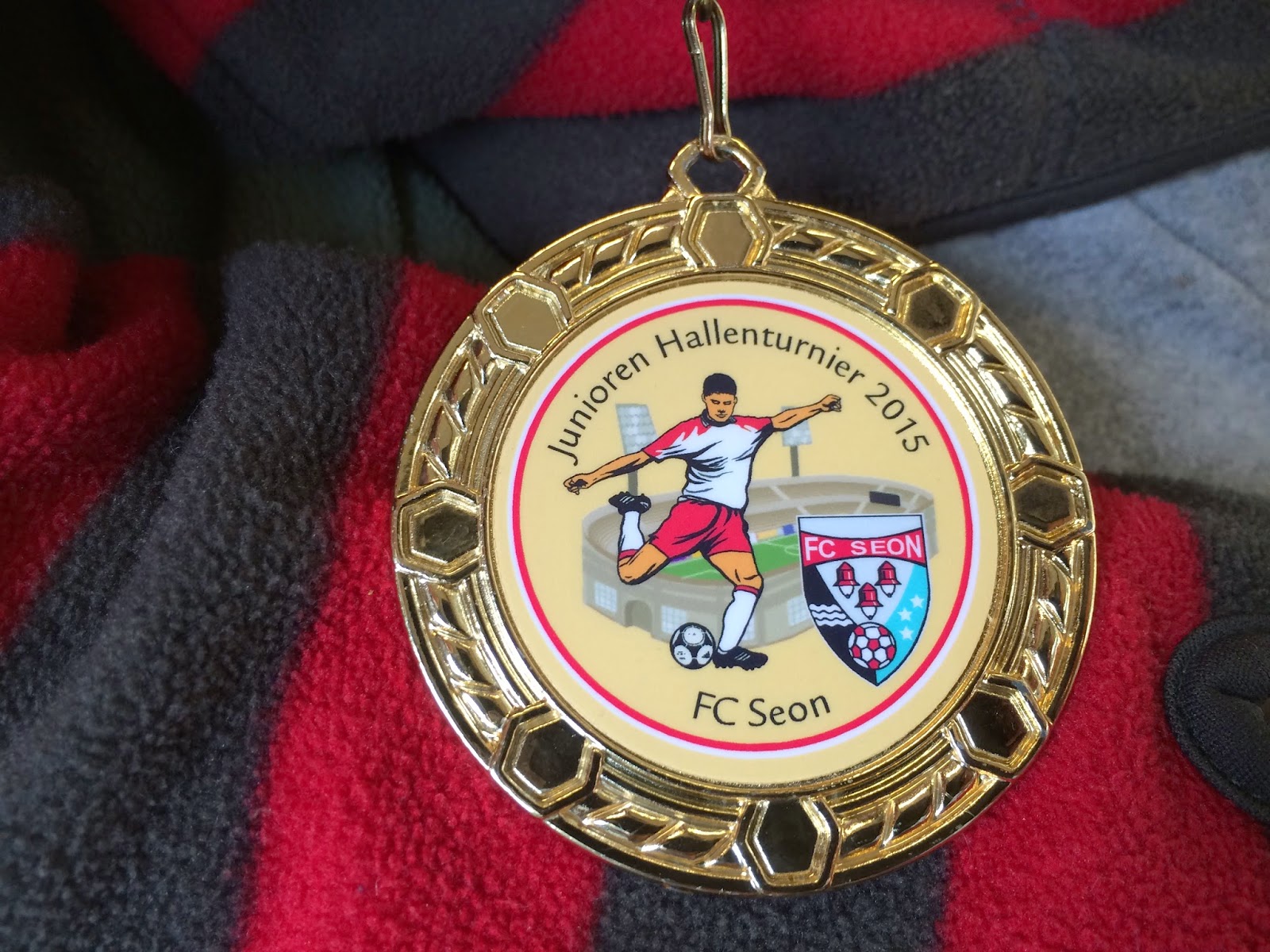 So, retail shortcomings aside, I feel that all in all we spent V-day weekend doing what matters: spending time with people we love. Although the guys were asking for another scavenger hunt. I am impressed and flattered that they remembered!

I might plan one for the green holiday that C and I are already looking forward to!