March 18, 2015
My Swiss friend Christine who lives in Seattle usually visits her home country - and us - mid-March. Not this year though, which is a shame!  In her message she regretted missing our decoration, food and company, and she asked what got my attraction for St. Patrick's Day started. 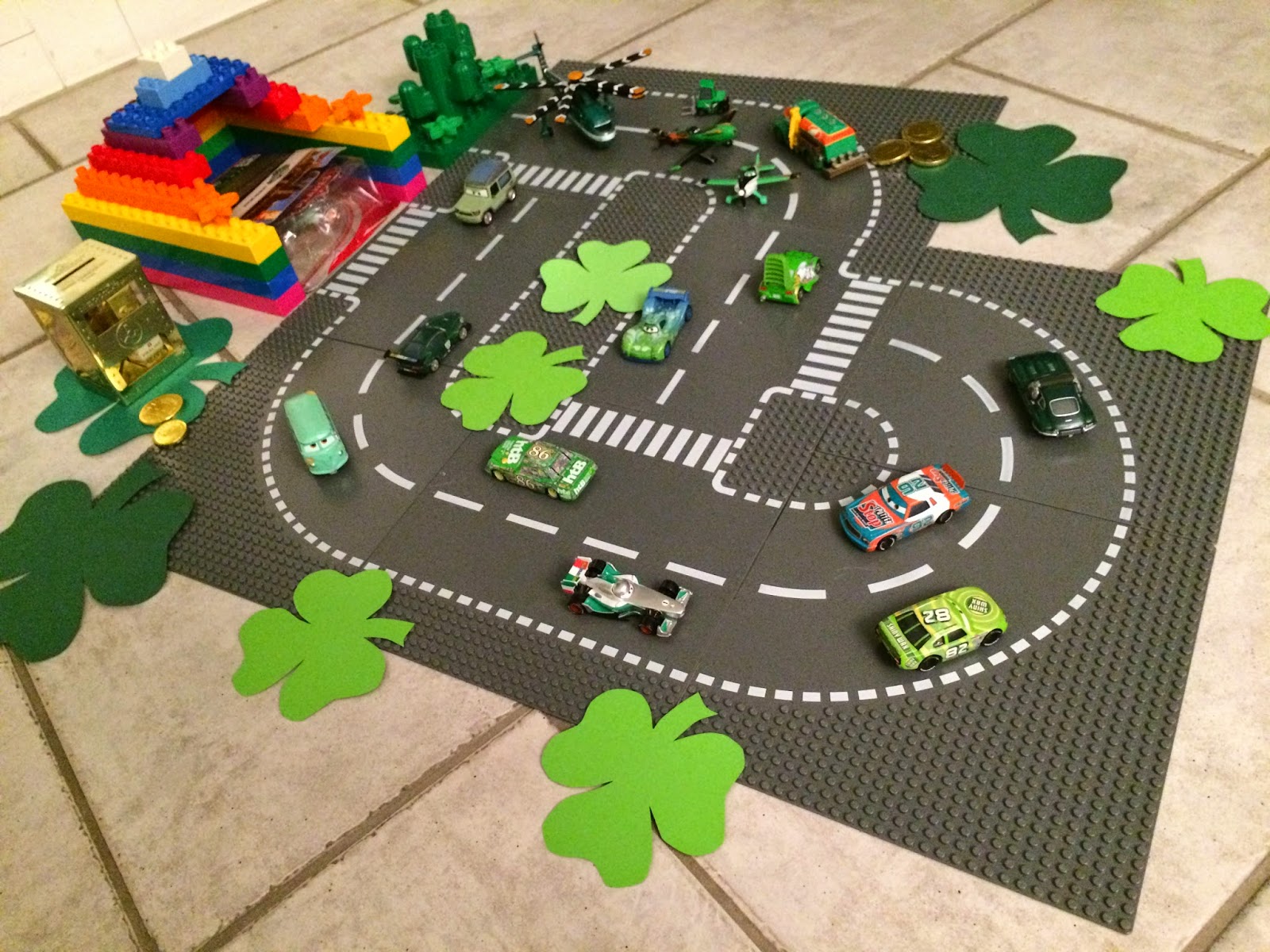 I guess it was the internet ;-) Saw some posts of people dressed in green, recipes of chocolate mint cupcakes, and that was that!

I went through my old pictures. Looks like 2012 - I didn't even blog back then - we had our first leprechaun visit and party: 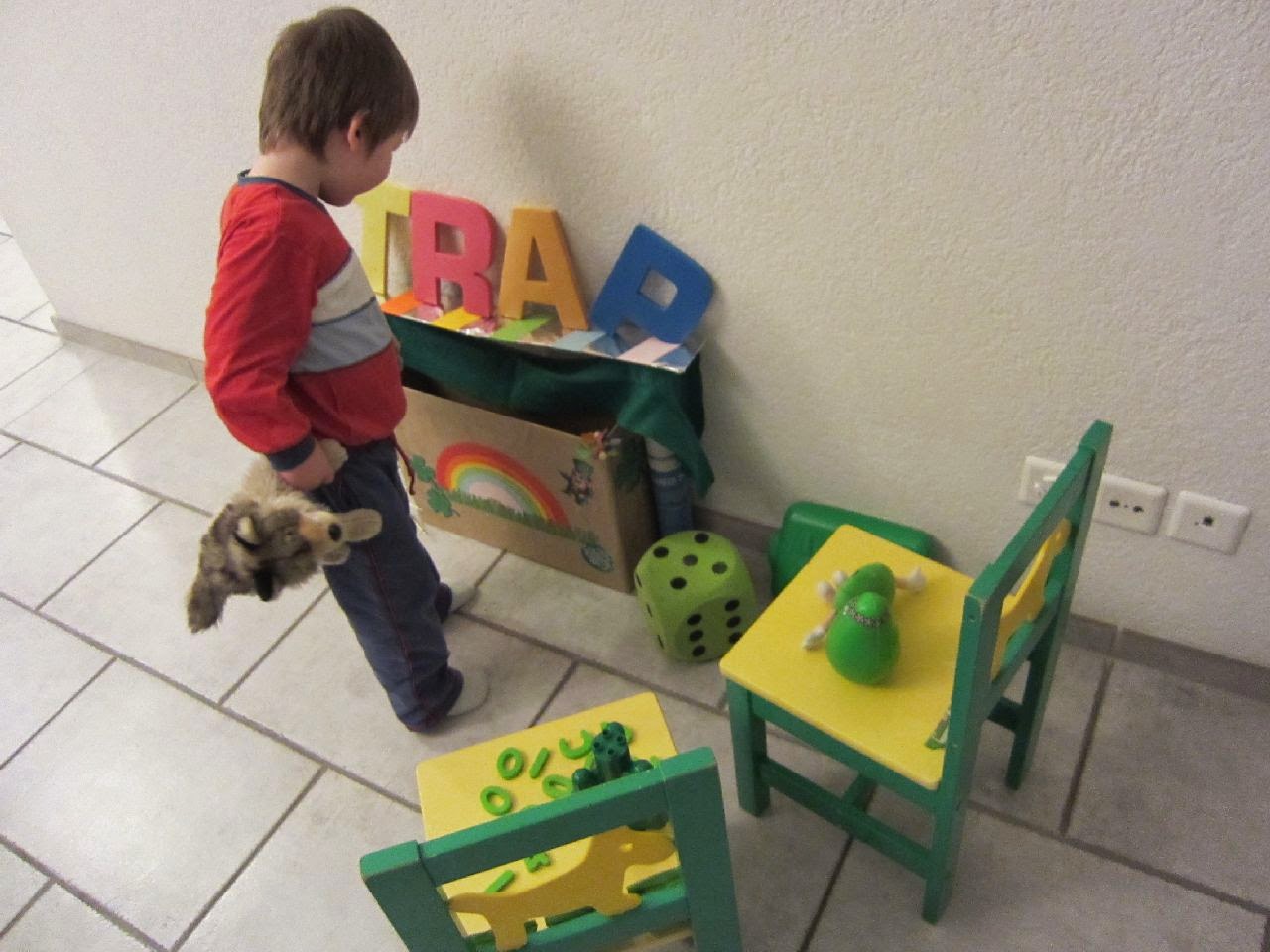 The following year I got serious about St. Patrick's Day: 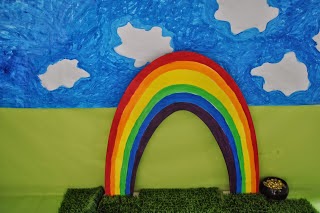 2013 we got our very own rainbow and some cute little TP roll leprechaun crafts!

2014 I was glad there was a box full of crafts from the previous year.

This year I put in some new effort, and look what happened, we had an early visit last Friday! 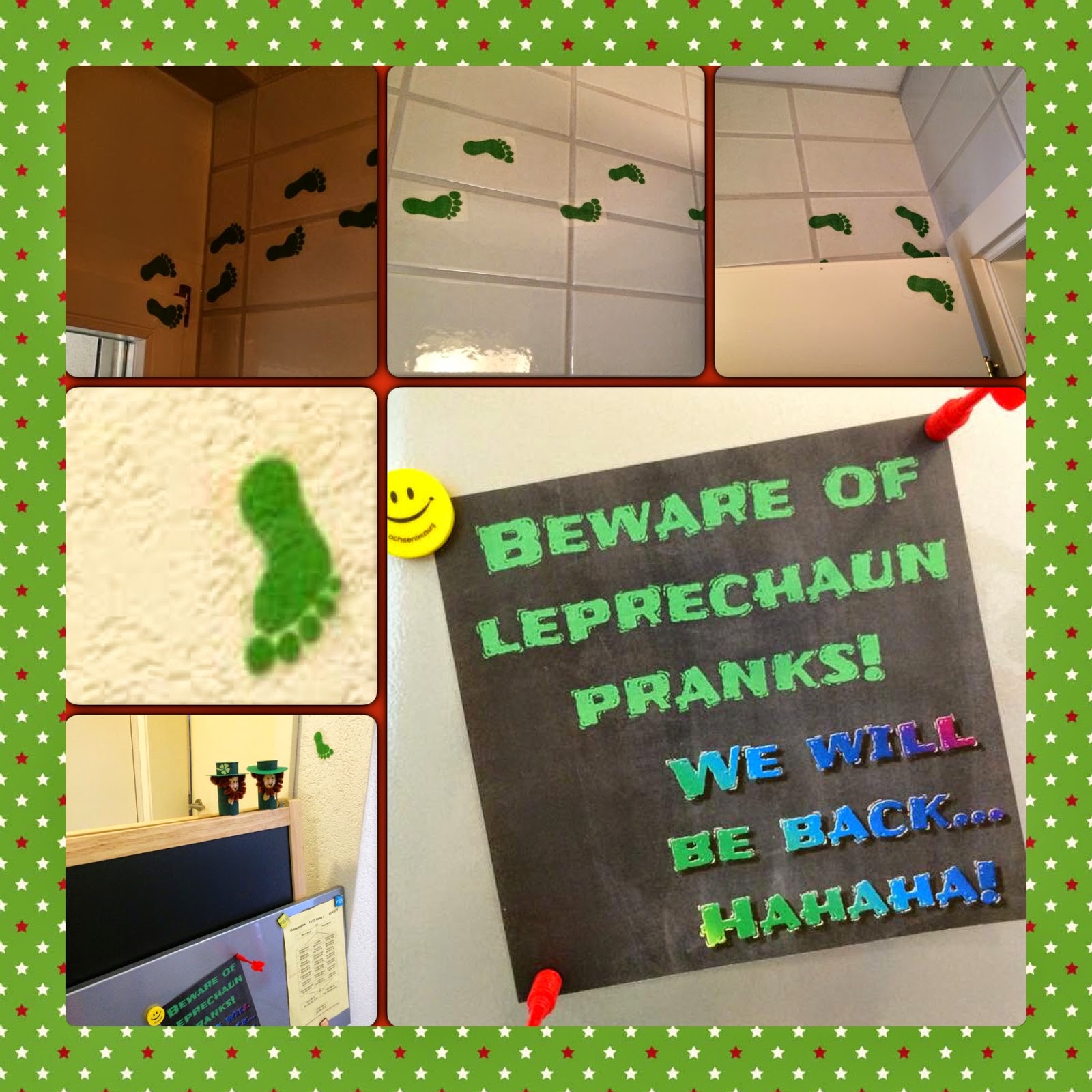 They seem to have scouted our place. Glad they didn't check the freezer cause that's where I kept part one of my rainbow sheet cake: 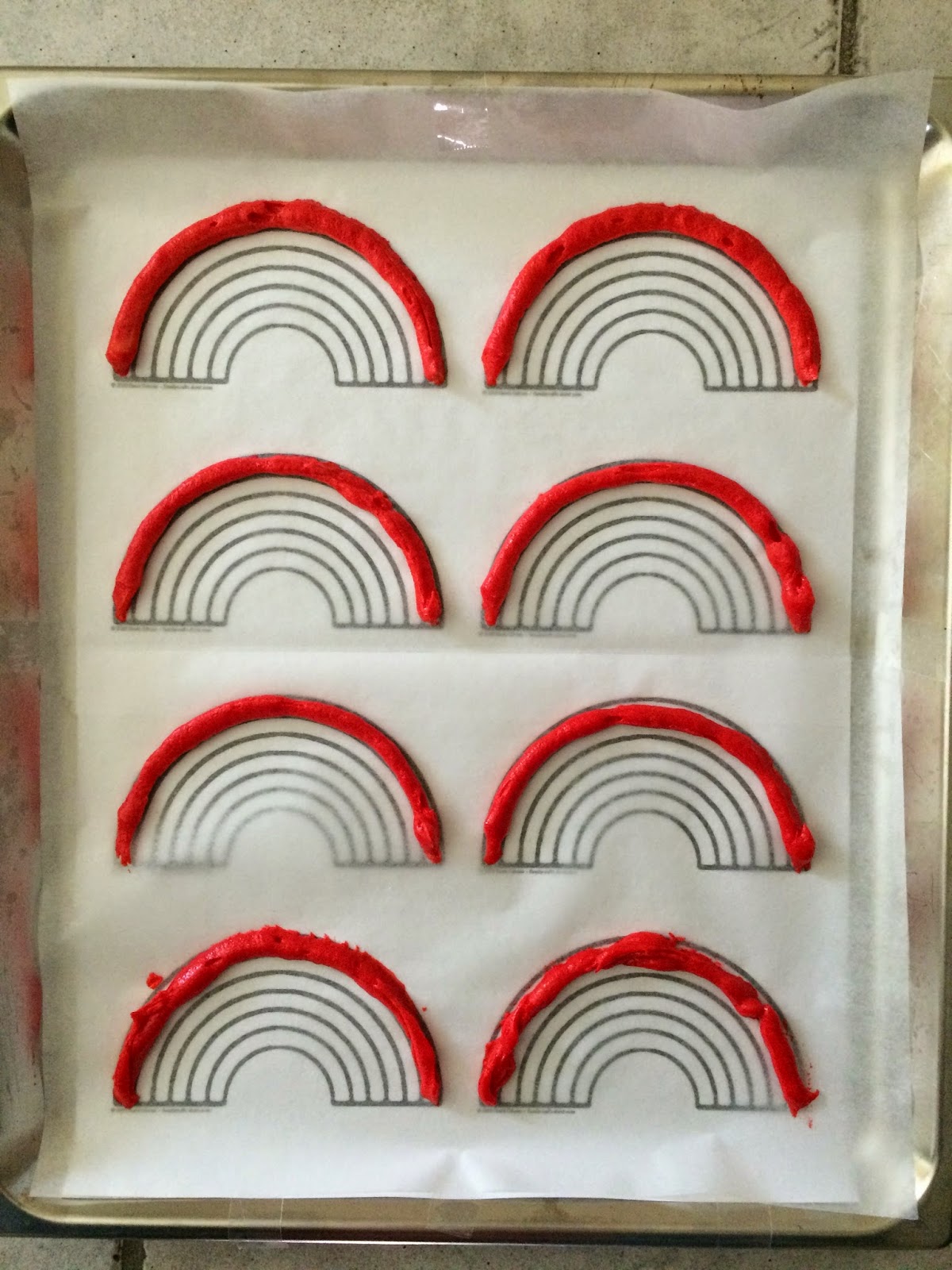 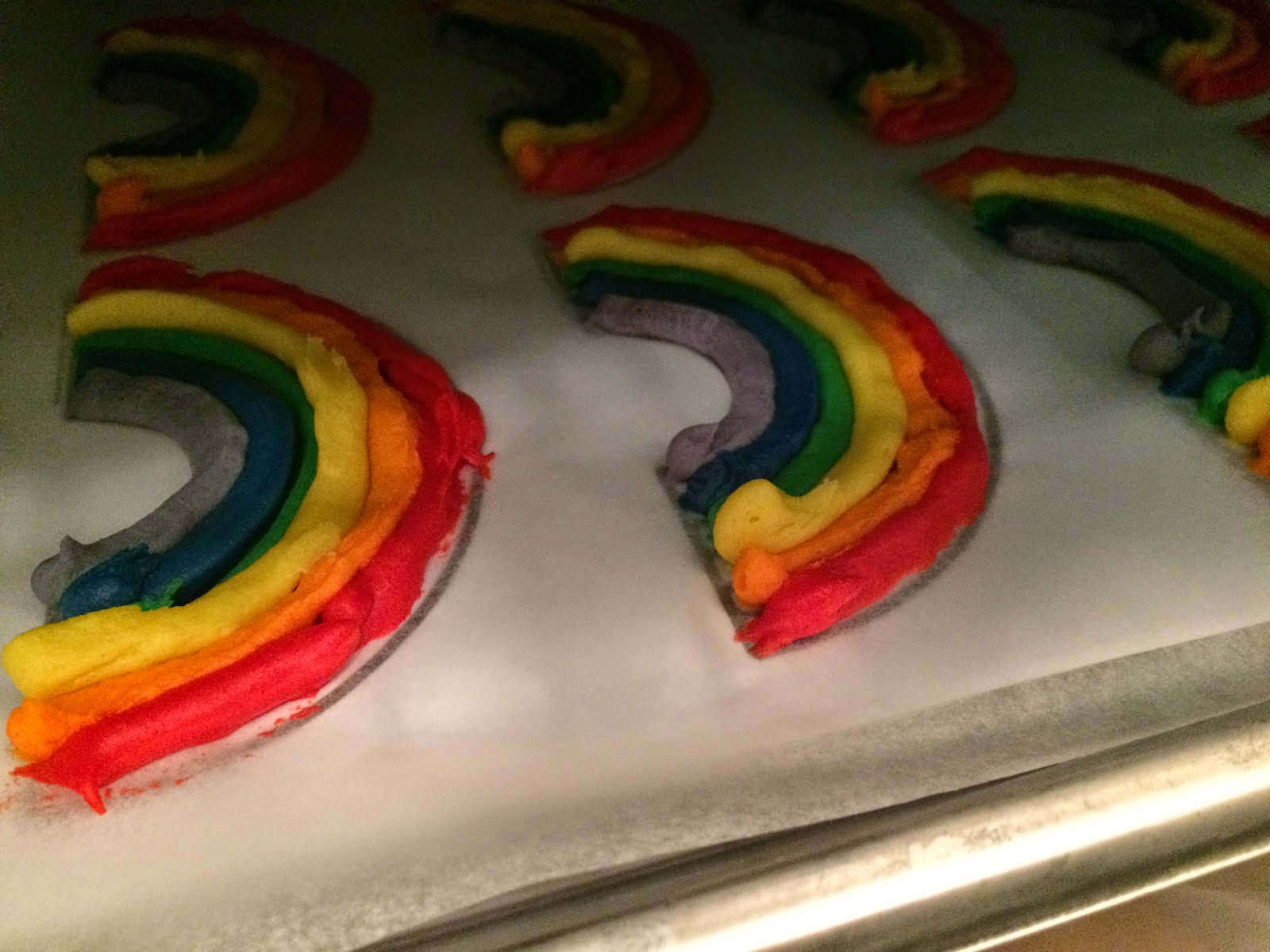 Colin and his friend Eric were talking on the phone on Saturday morning, discussing E should come over a couple of hours ahead in time. I had been running around, cleaning up all morning and was nowhere of being ready for a playdate. They usually don't require babysitting animation or supervision, but just in case I put some craft supplies on the table so they could work on their leprechaun trap: 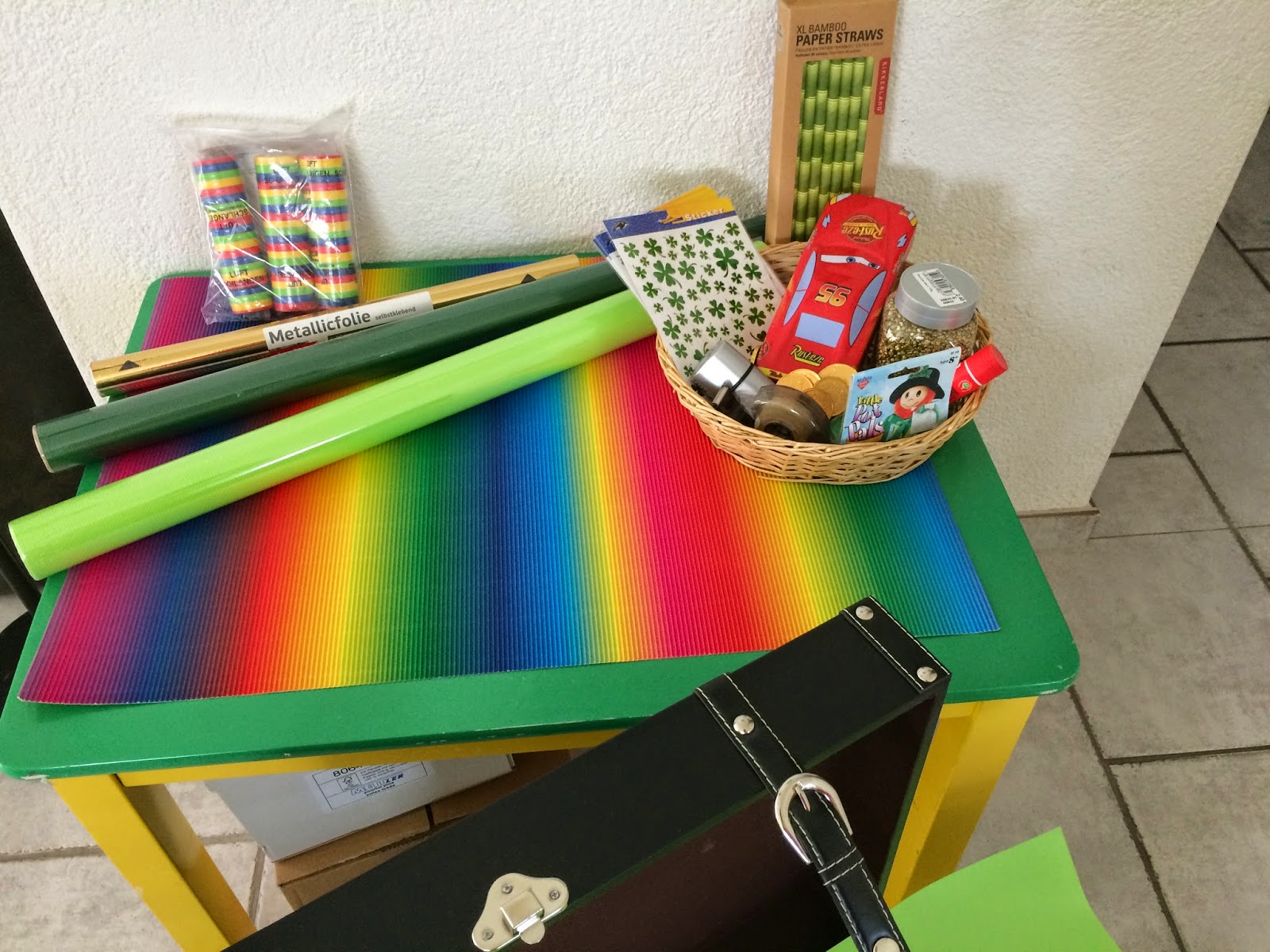 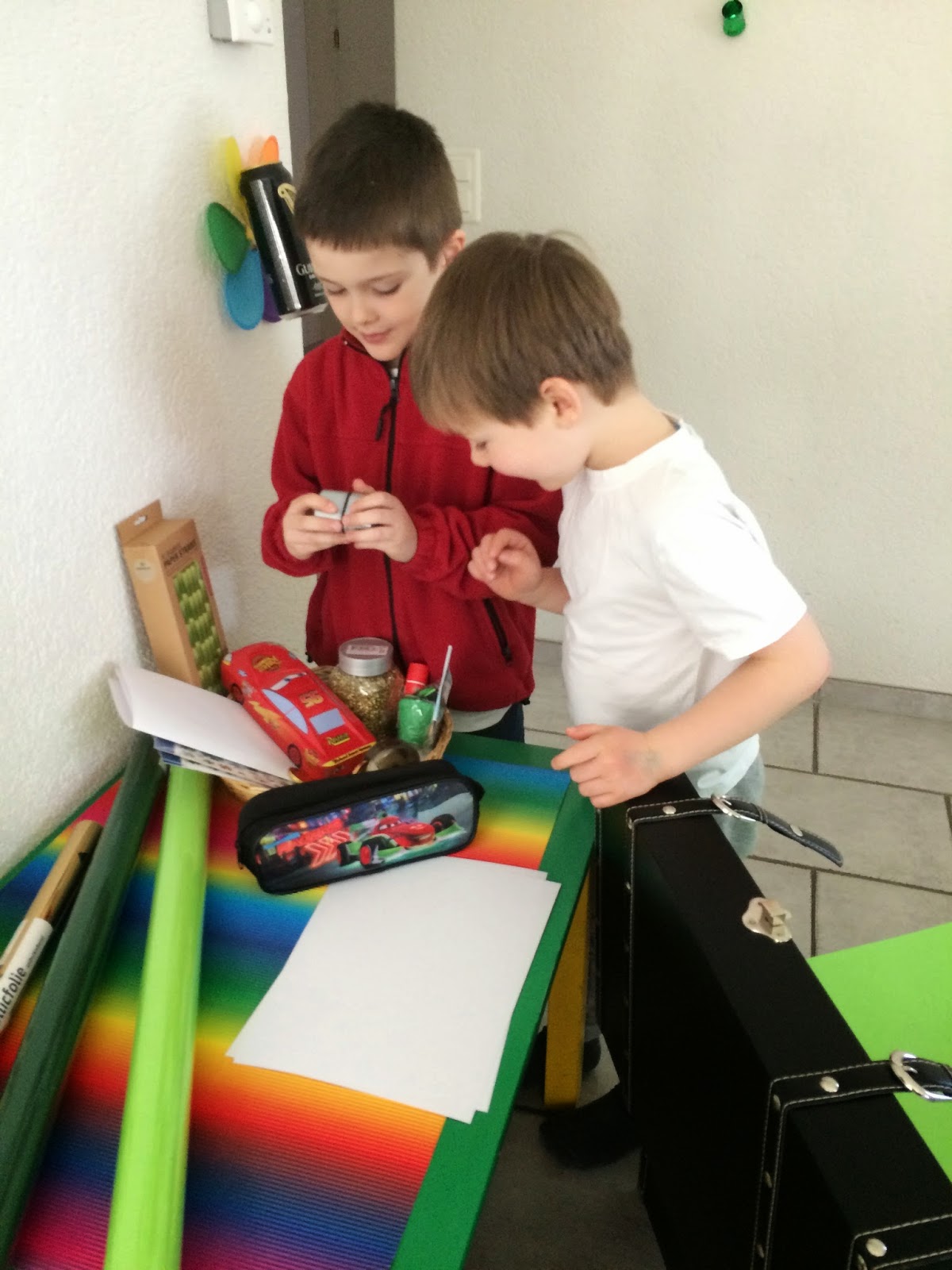 They decided to just play but got bored and annoyed by each other quickly. 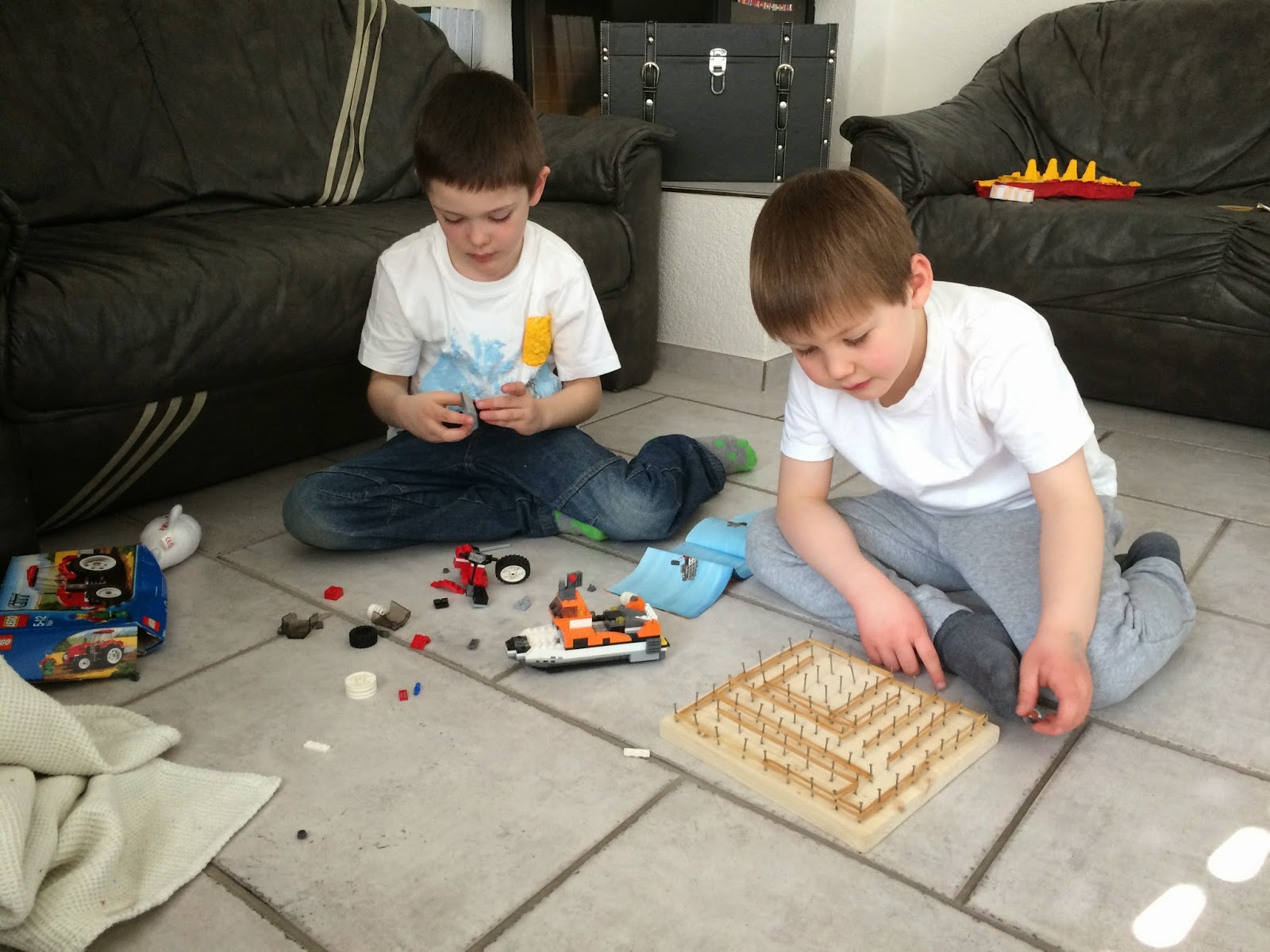 In the meantime I had winged a simple treasure hunt (how many shamrocks can you spot, count the chocolate coin money, paint a rainbow, what's Ireland's capital...) 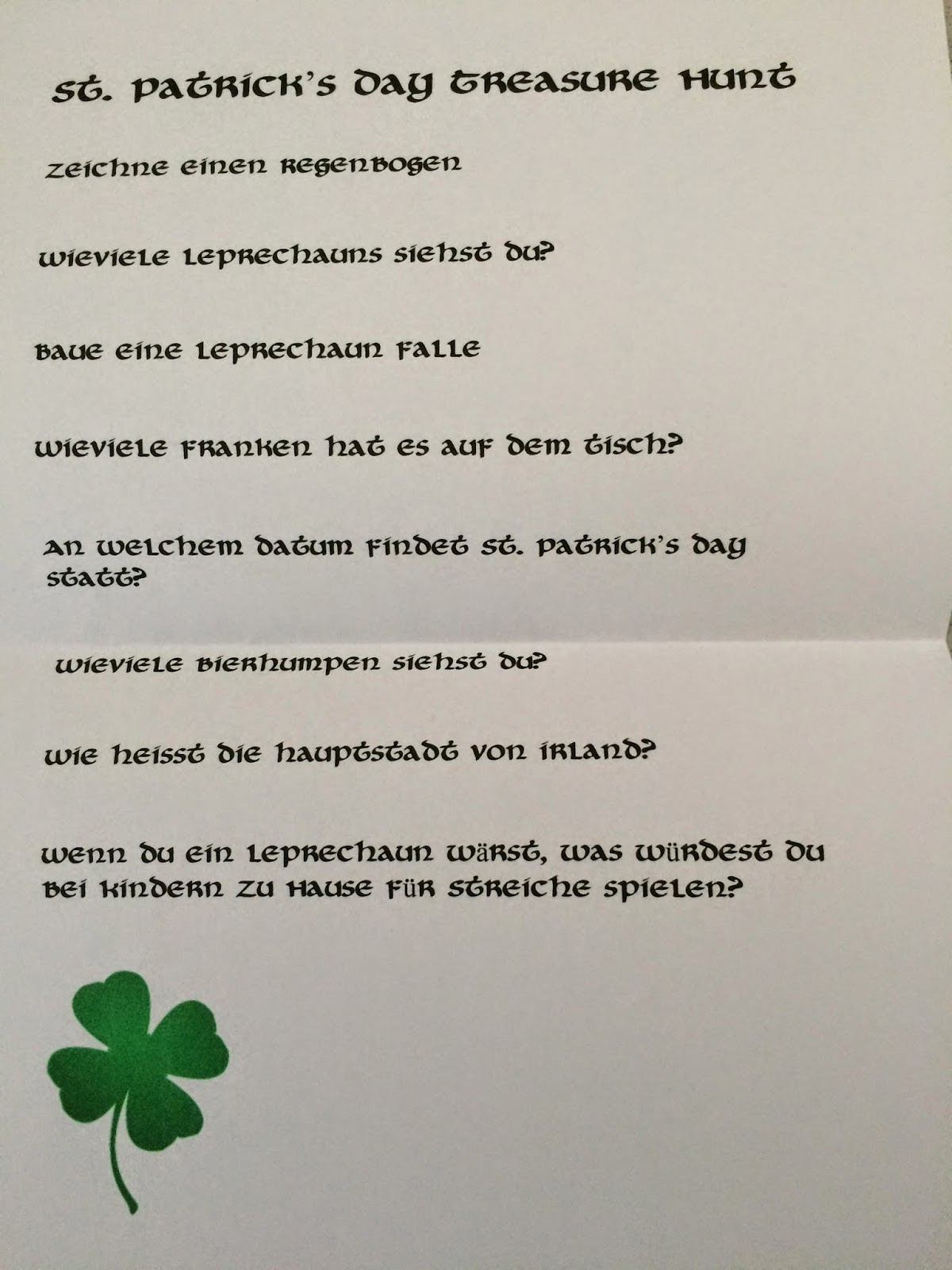 but then they got into a fight over which rainbow was "right". 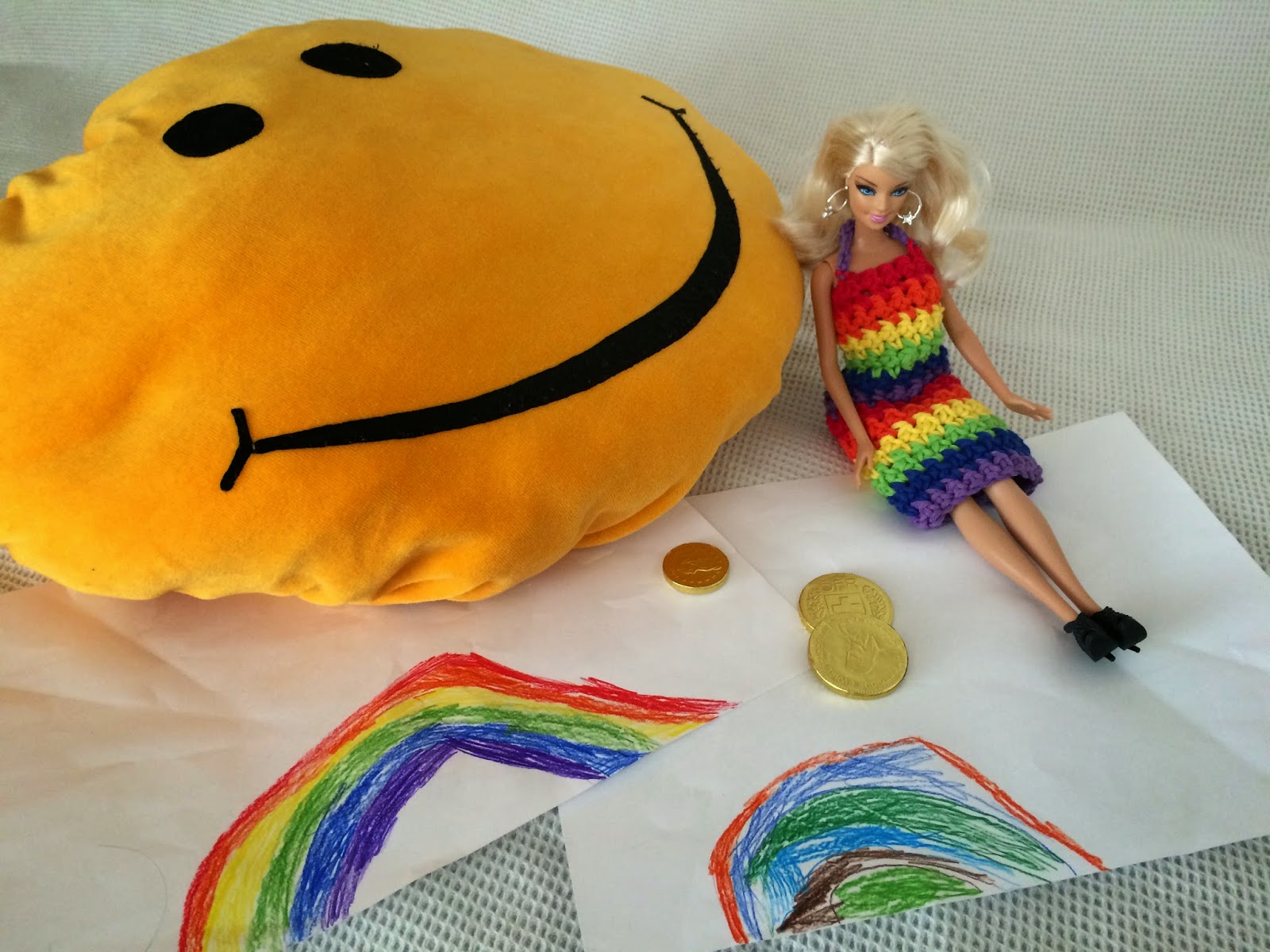 I couldn't listen to the bickering anymore and told them to either go play outside or help me out, I had some potatoes that needed peeling.

I was shocked when they actually showed up in the kitchen and asked for a peeler! I know that Eric is very skillful, he once peeled and sliced kiwi for me when he was 4, but Colin usually finds something else to do when kitchen duty even gets mentioned... 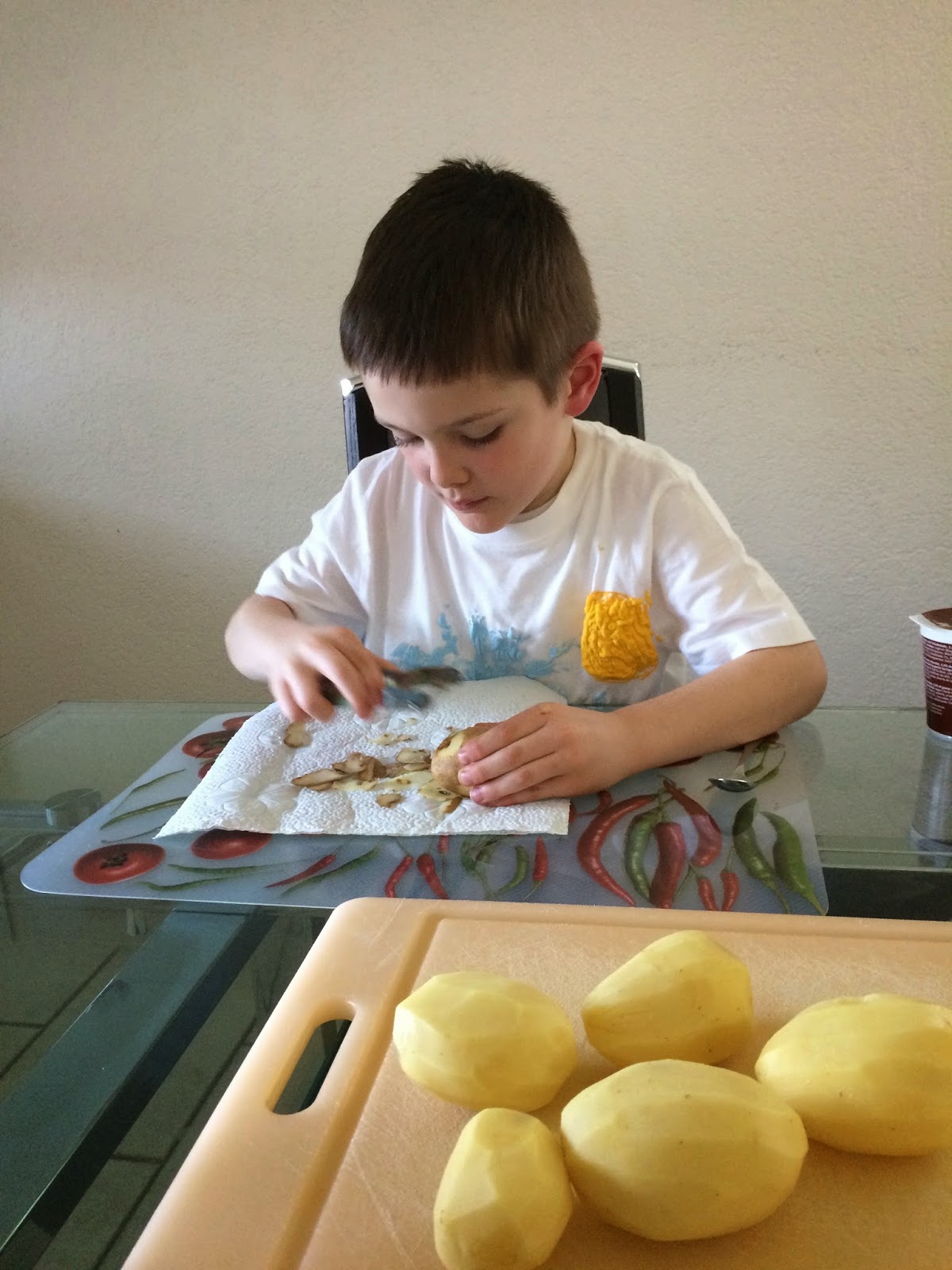 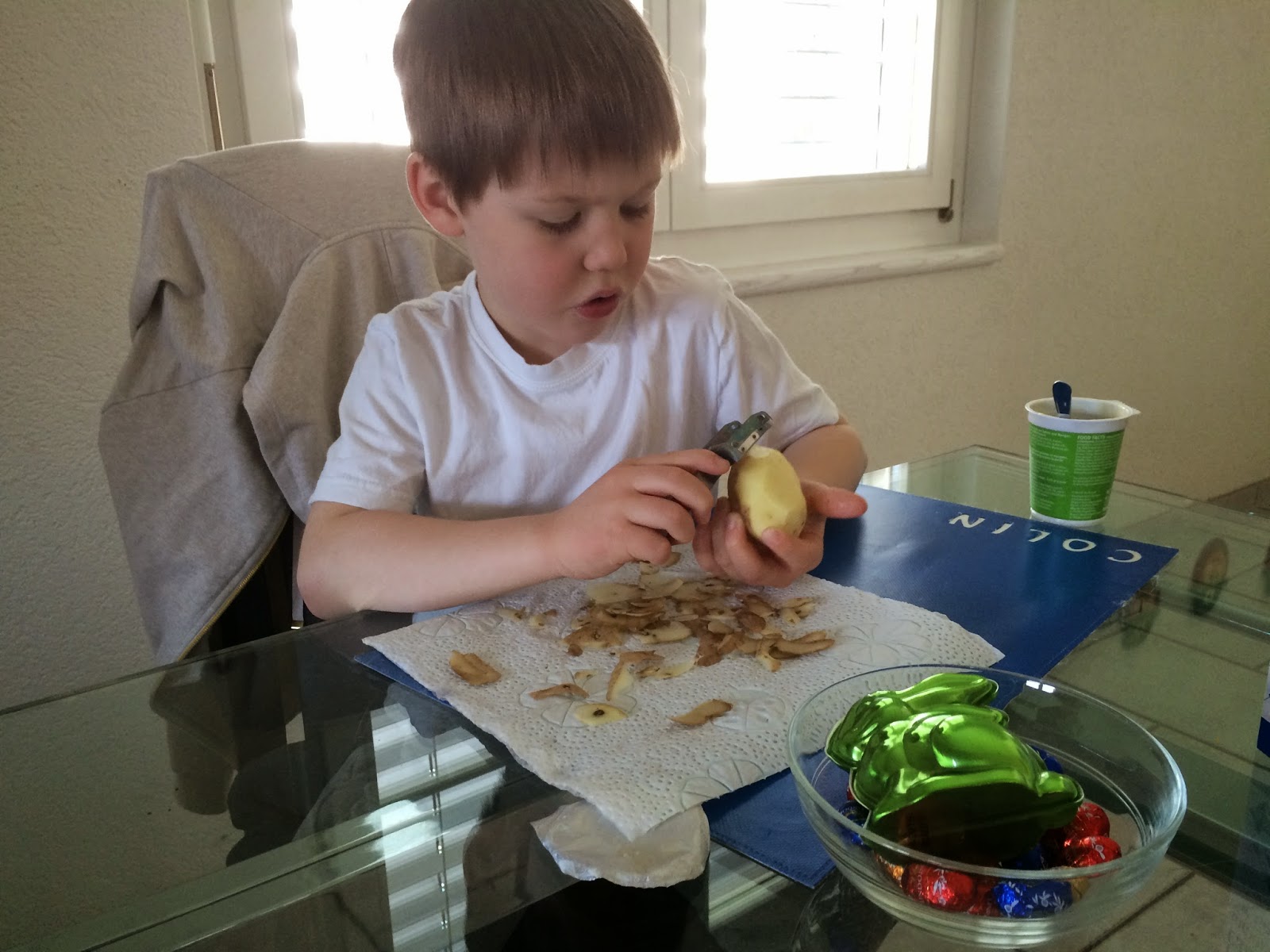 I had no idea that peeling potatoes could mellow out little boys! Look at the beautiful painting Eric made afterwards! 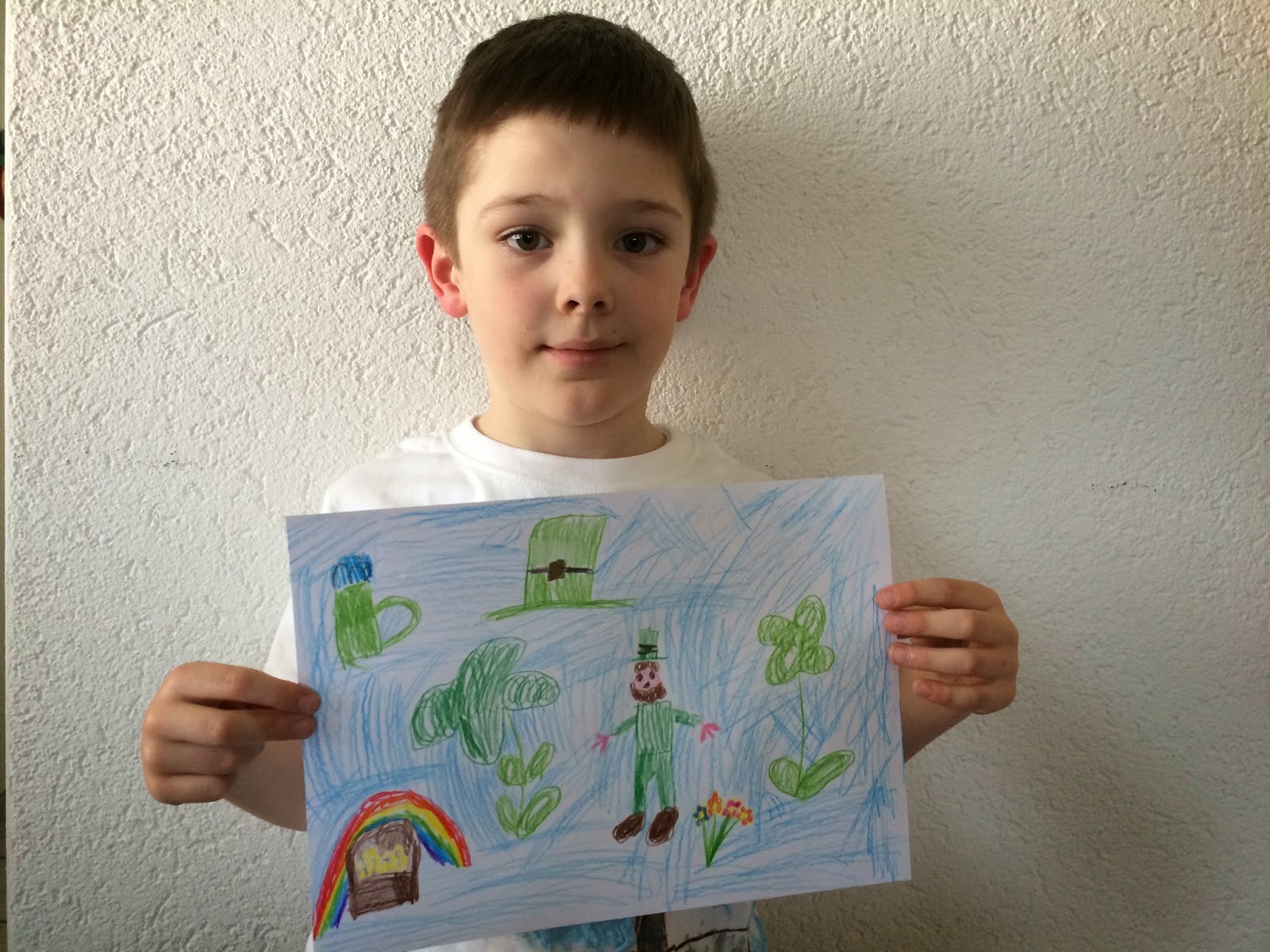 So grateful I was able carry on in the kitchen…

I know I said I would probably not make any more soda bread. Well, I reconsidered. Doris and I were going to need something as a base after we'd open our bottle of sparkling wine! 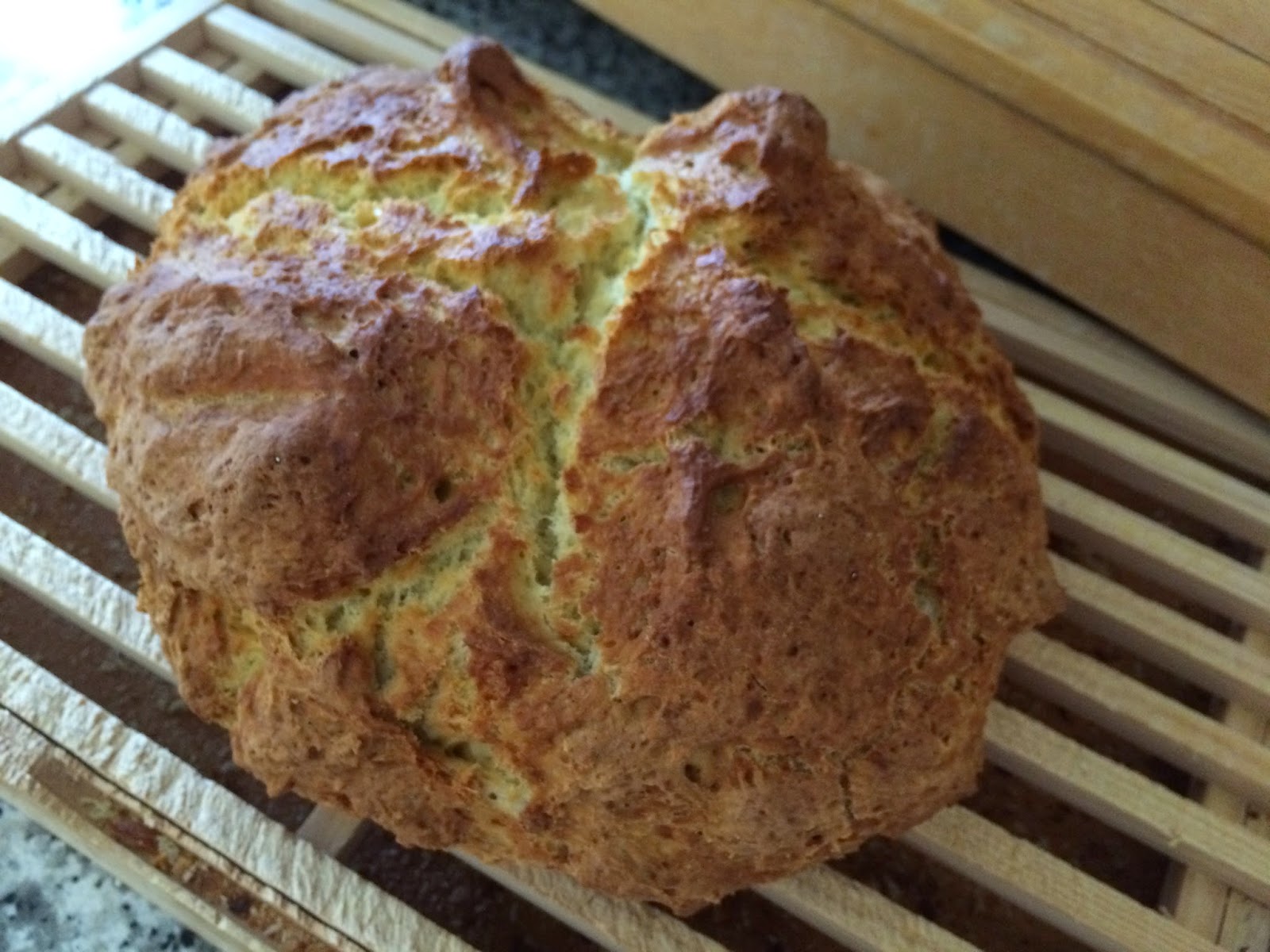 Then our friends arrived, and Vincent, Eric's younger brother, plunged into making his leprechaun trap. 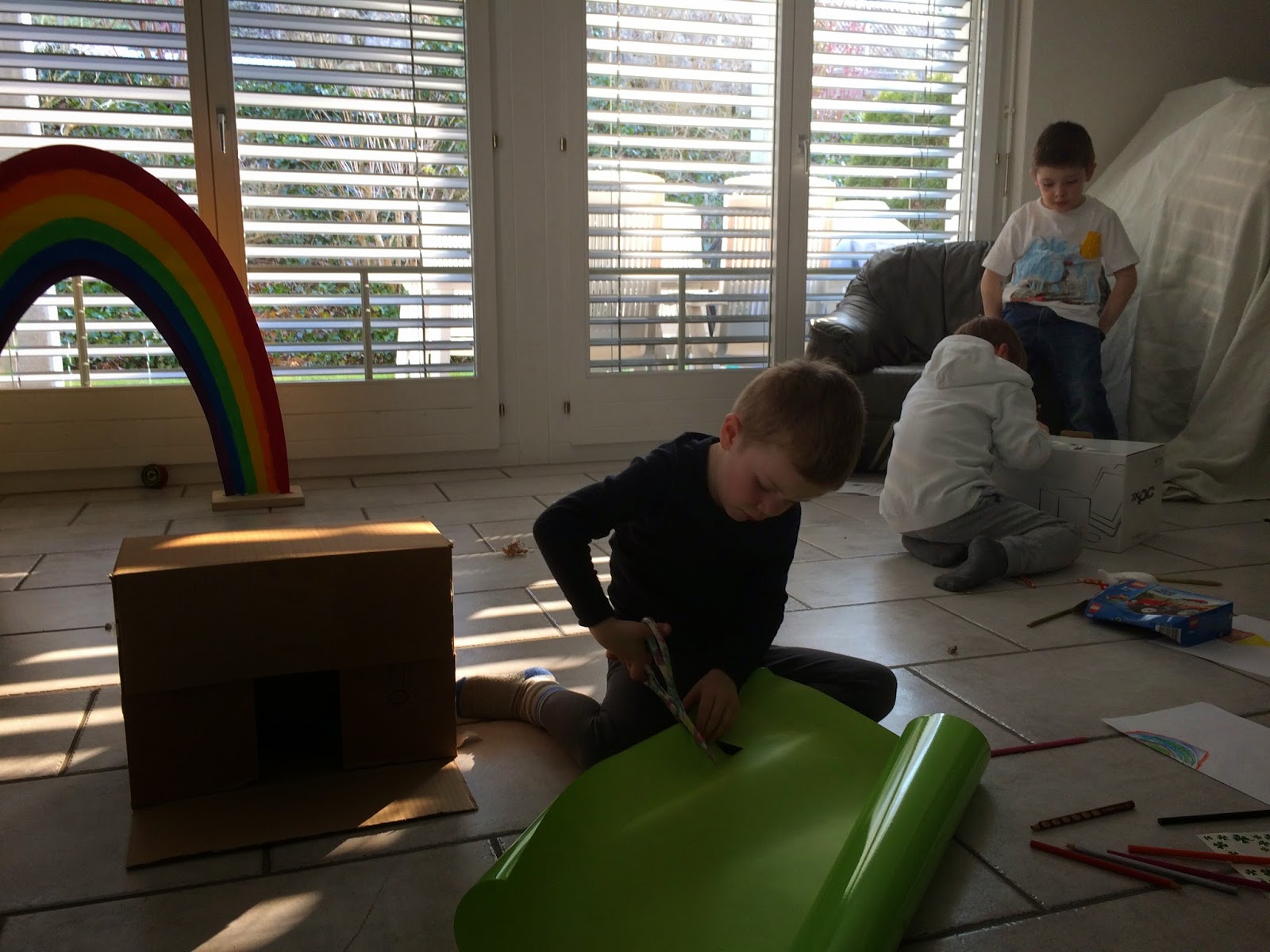 It's tough though when the older brother made this piece of art: 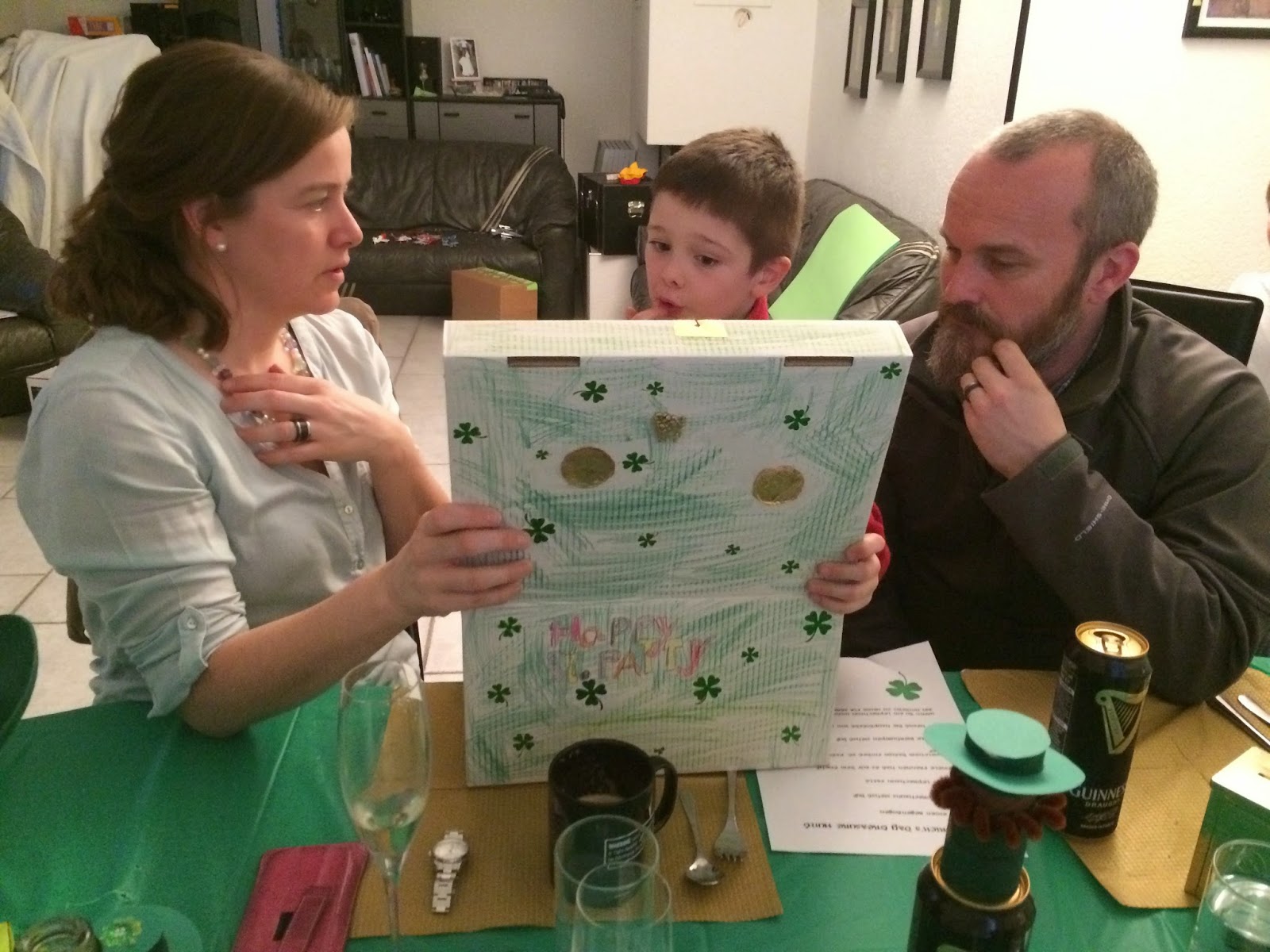 To reward the guys for eventually completing the treasure hunt they got a treasure chest full of crap sweets and valuable toys. 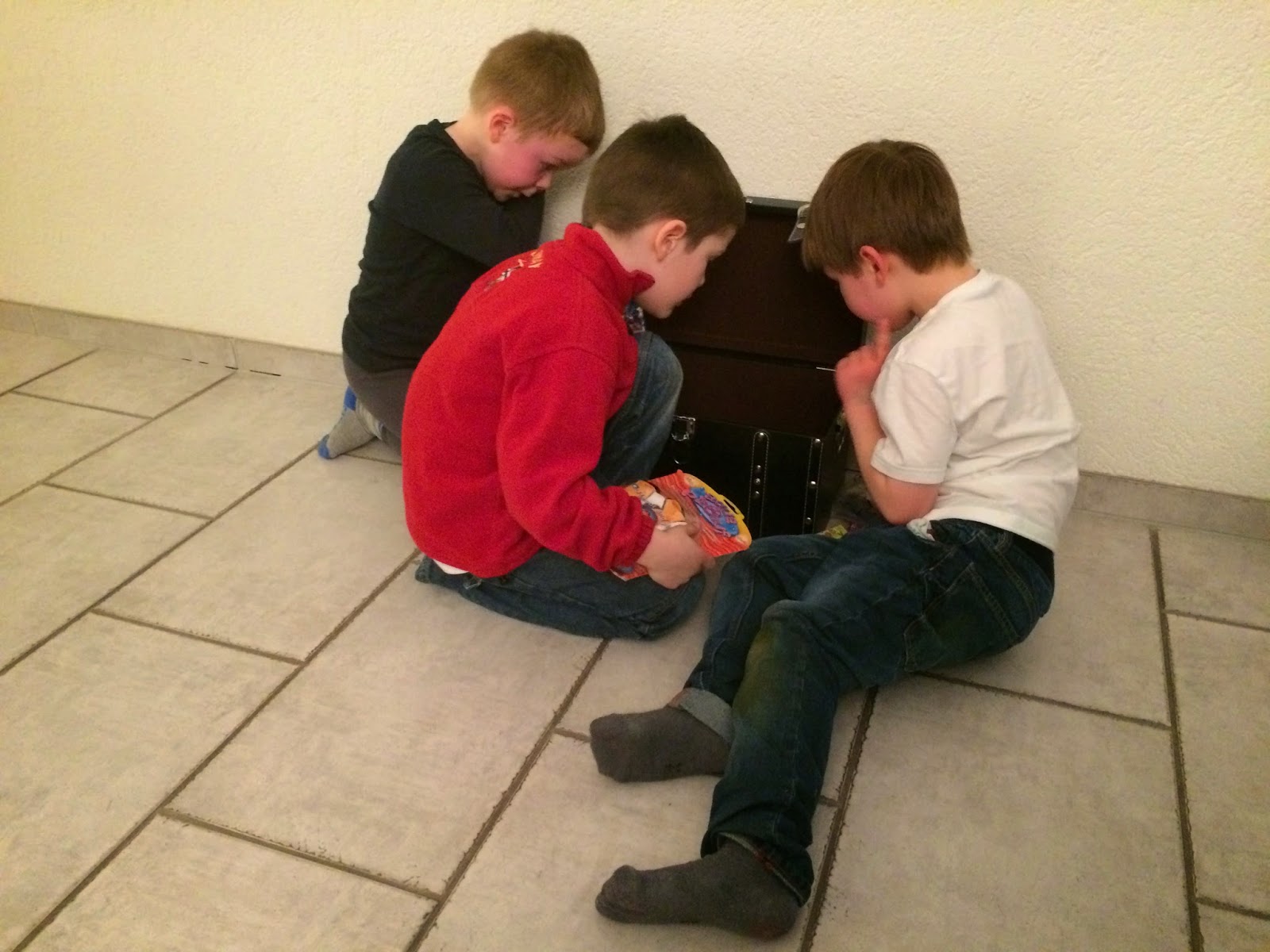 Time is flying when you have great company! 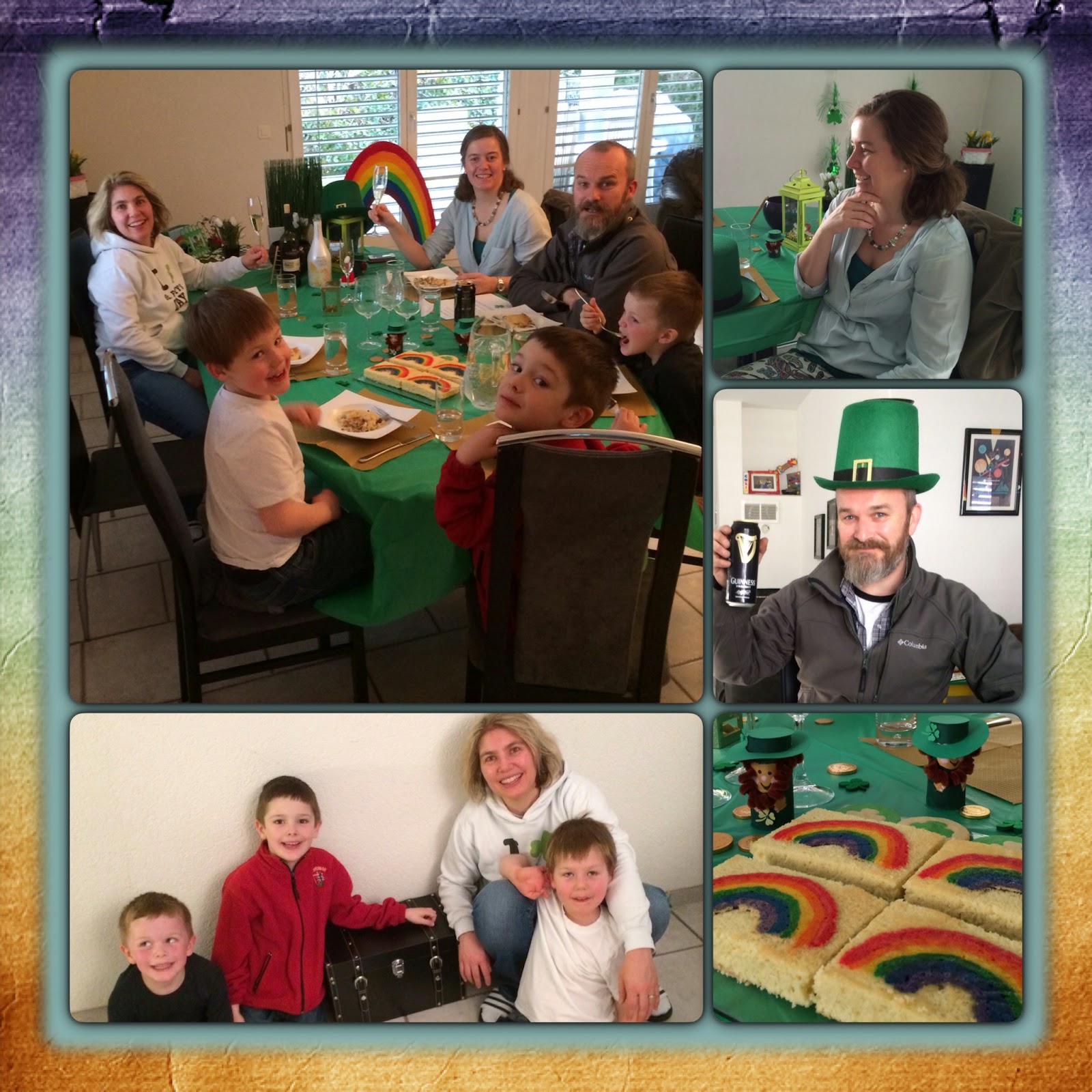 Monday morning we were up for some surprises - leprechauns had been playing in our house!

They took a bubble bath in our tub, built a rainbow hangar (even left a new plane in there), in a Legoland full of green cars on the streets, decorated our tp rolls with shamrock stickers, put green laces in Daddy's shoes, brought froot loops and leprechaun water for breakfast and dressed Barbie in a green Boston jersey. Personally I think the B is for Barbie. 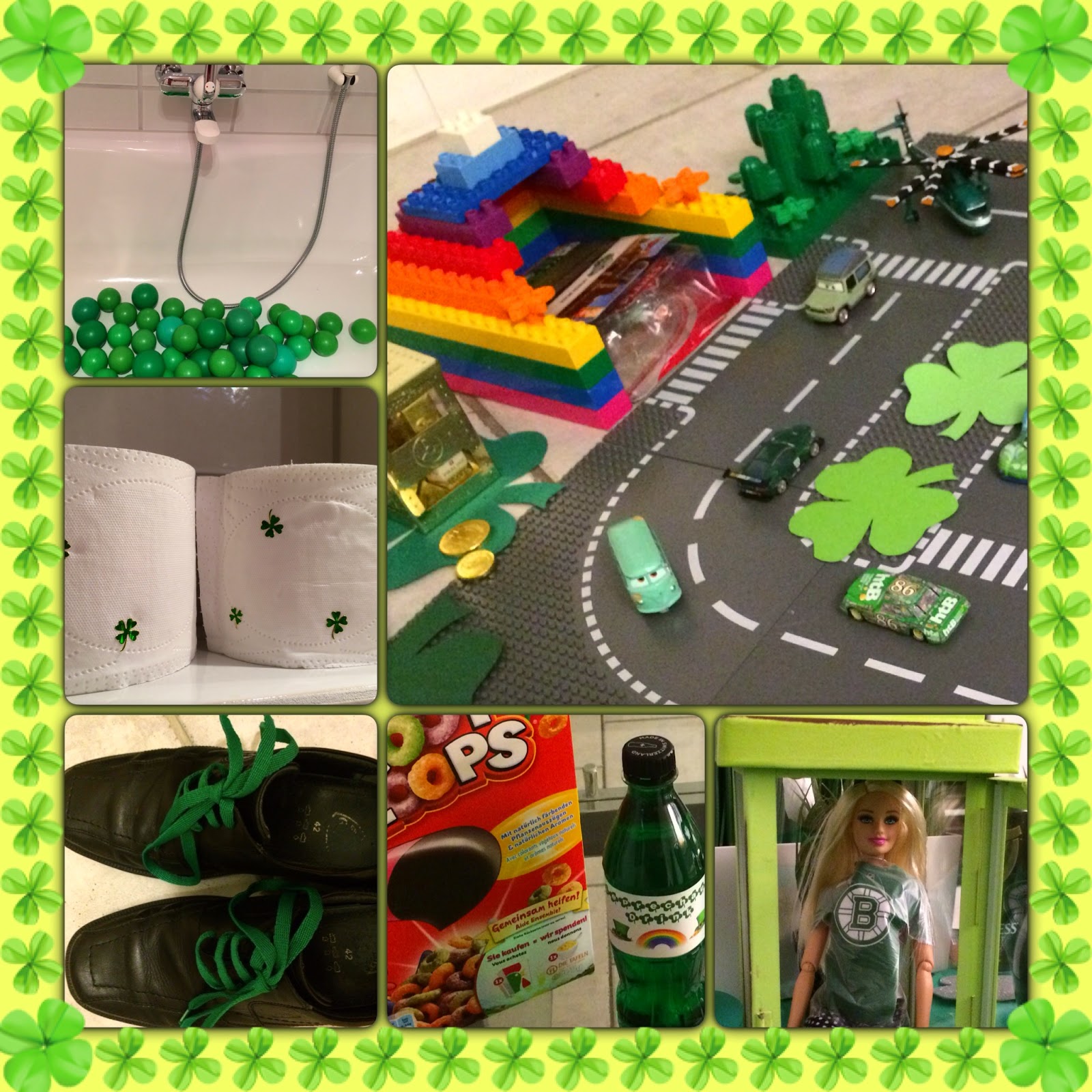 He already talks about world championship. "What day of the week is May 10?" He asked the other day. I looked it up, it's a Sunday. Why does he need to know?
"That's when Switzerland plays versus Canada."

I see. Better put it in my calendar and not invite anybody who doesn't care about hockey like I did last year. He wasn't happy.

So he forgot the leprechaun team. They made it for him. Fitted right in ;-) 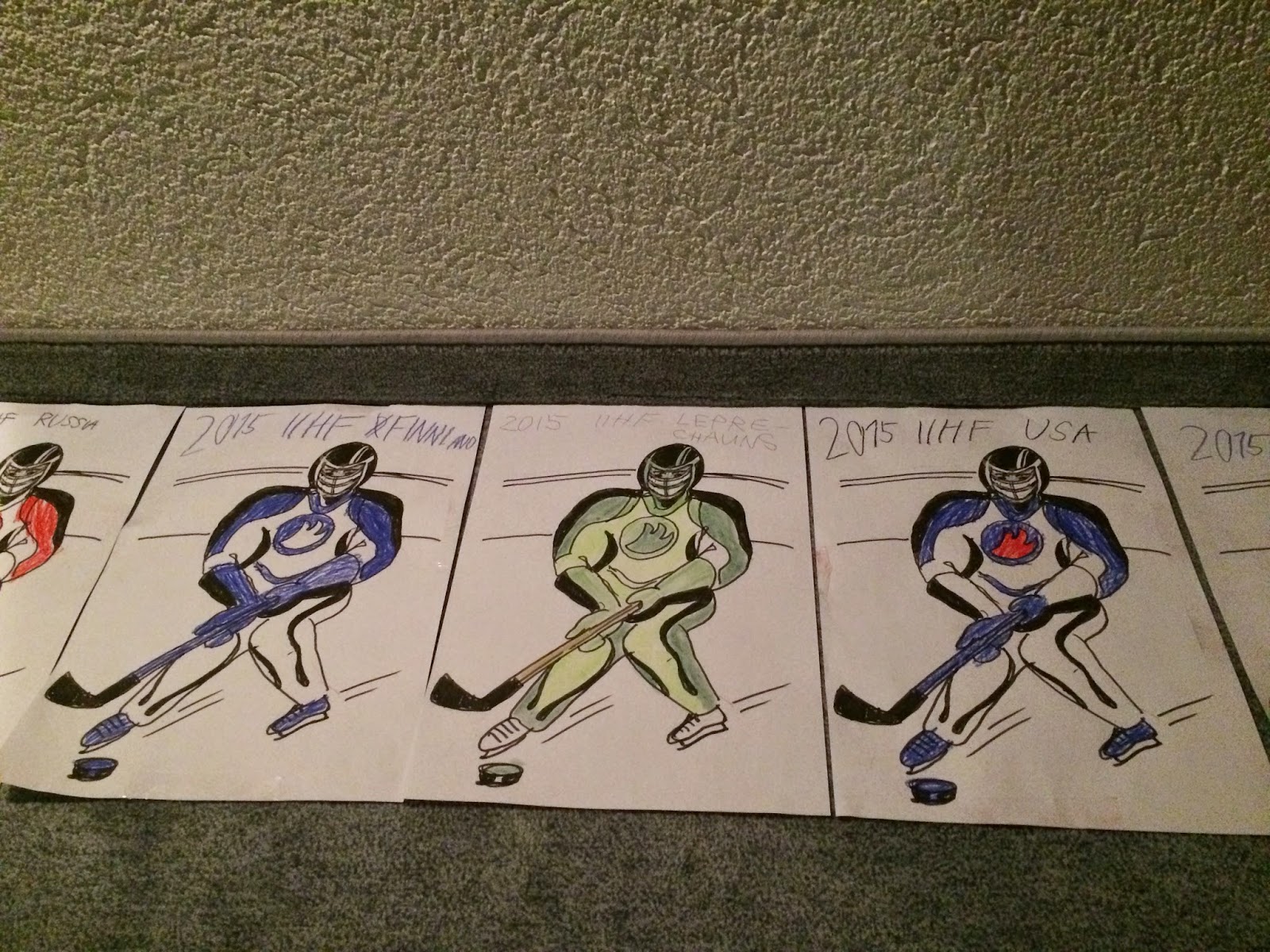 Before they left, they wrote a note. Can you read it? I said I couldn't, and I thought they were probably drunk when they typed it. Colin's assumption: they must have had one too many leprechaun drinks. Better be careful sipping from those bottles! 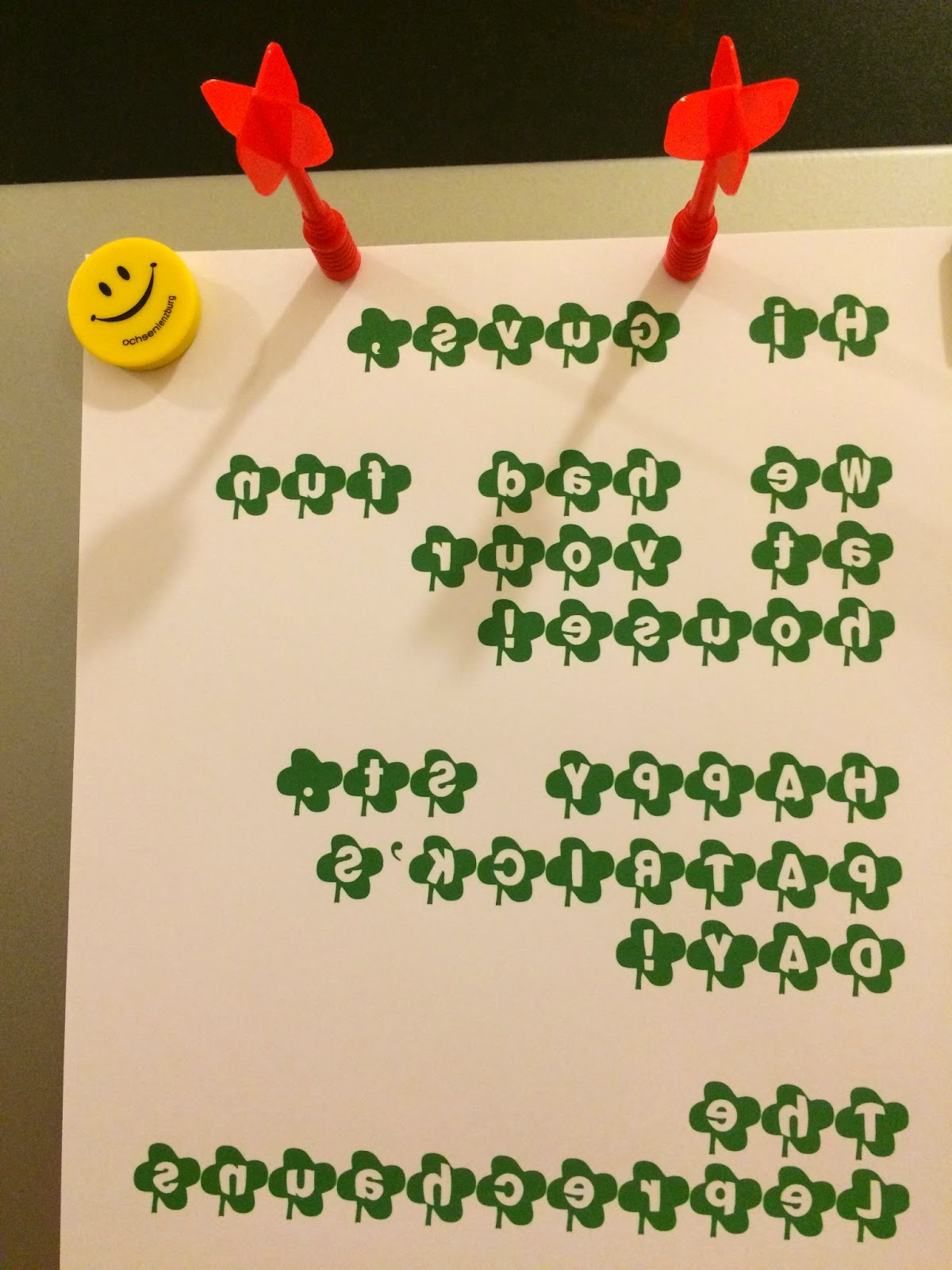 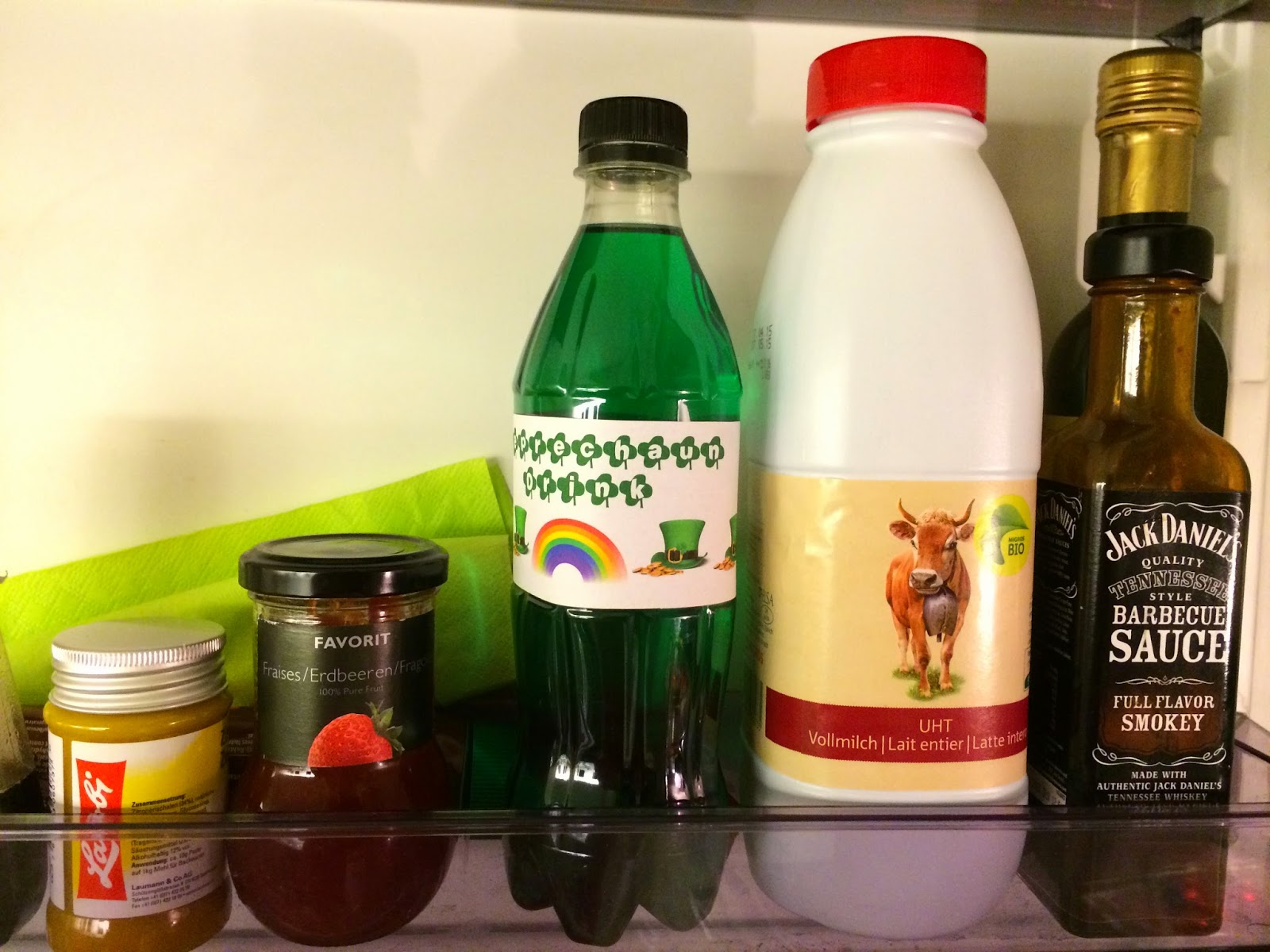 I tasted the leprechaun drink. There was no alcohol in it. So I used it to cook my pasta for dinner: 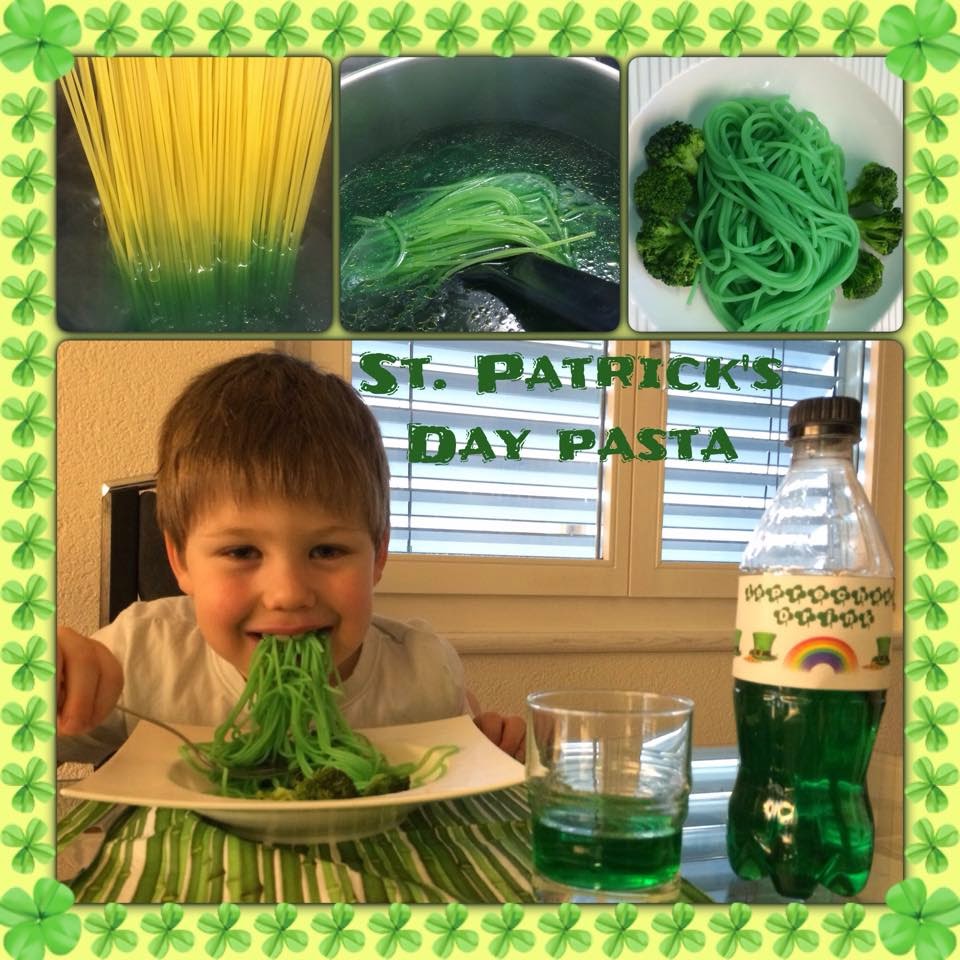 Too bad one of my favorite holidays is already over! See you next year!

How did you celebrate?

PS: C has yet to discover one last prank… They wrapped some of his favorite books in green paper. Must have been a tedious work because they stopped. 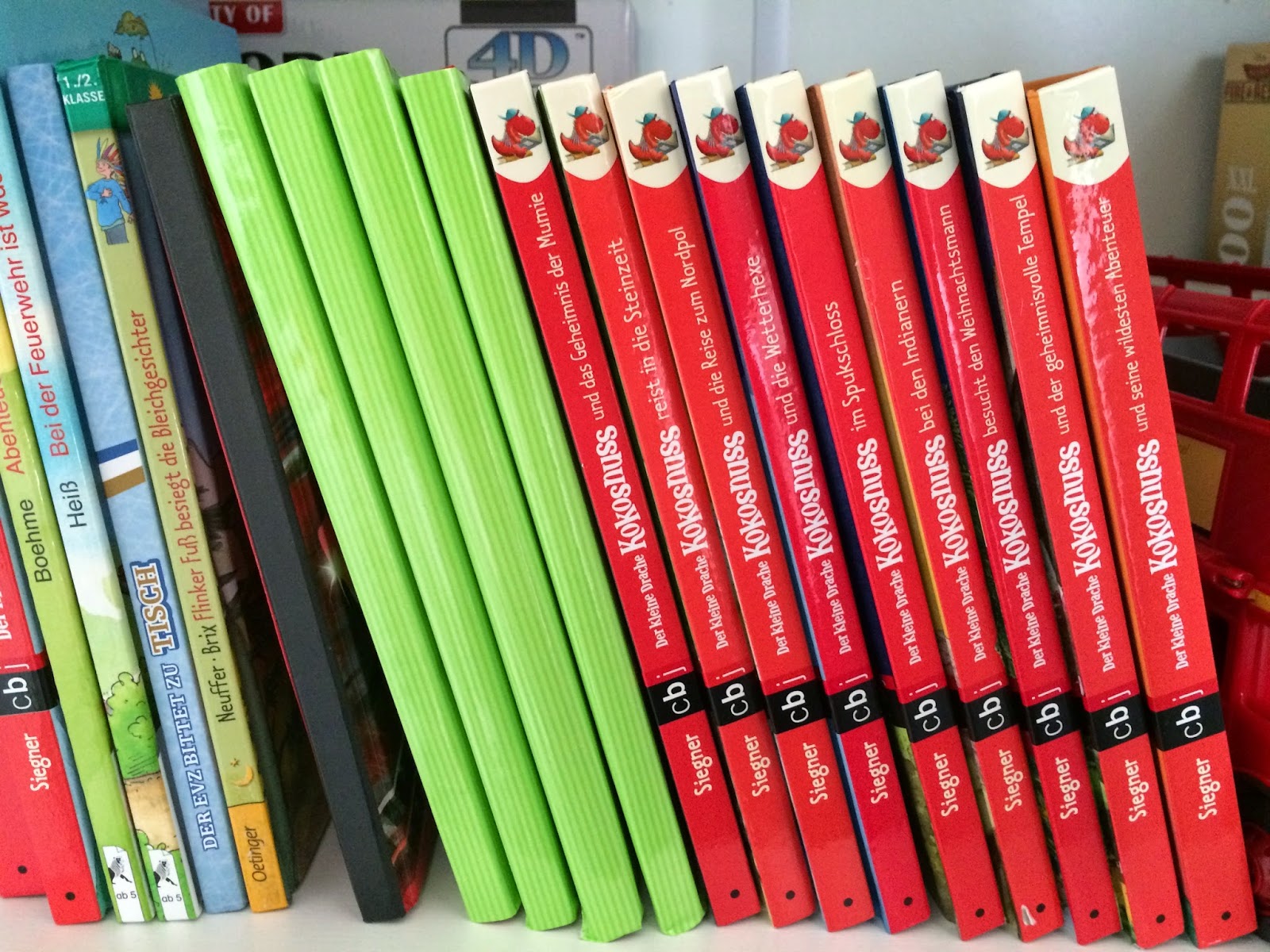