Indian Summer and other Muffins

June 03, 2015
A few weeks ago I got a charming invitation from Migipedia, Migros' consumer platform.

They were going to conduct a muffin tasting for their American Favorites category and therefore looking for volunteers.

I didn't even remember being a Migipedia member, but then it all came back to me. Early last year I signed on to whine about the disappearance of my favorite toaster pancakes. 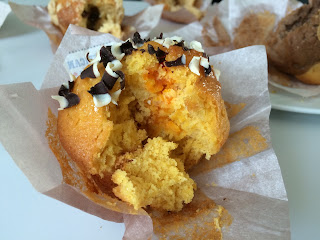 Anyway, today was the day, and it was a 90°F kind of day. Luckily the conference room had A/C.

The friendly lady who was in charge explained that we were going to taste a bunch of fall muffins, and that we were supposed to judge their look, smell, aroma and taste. The top three were then going through an additional internal elimination process. 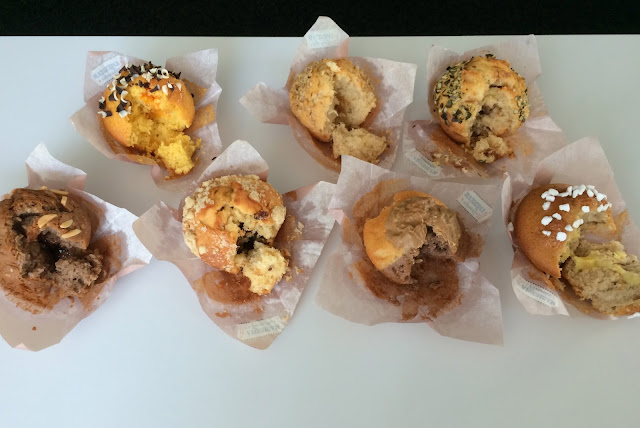 They were all looking and tasting delicious, well maybe one exception. Triple M was an unanimous triple flop.

After we were done tasting our muffins individually, everybody presented their findings to the group. It was a very diverse group, probably put together carefully considering age, gender, location…

As diverse as the people were, as diverse was their way of expressing themselves.

One guy reminded me of Beat Schlatter, a well known Swiss comedian, so his feedback was very entertaining. 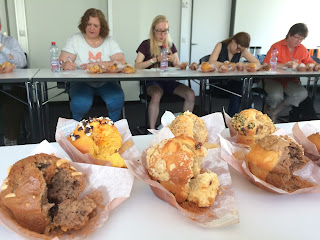 One muffin was a definite winner taste-wise, Toni Marroni.

Marroni is the Swiss German name for chestnuts. The muffin dough contained chestnut paste and was filled with more chestnut paste which made the muffin very nourishing. It was topped with caramel paste, and frankly it didn't look too attractive to me.

One test person was pretty blunt about it.

"It kind of looks like a dog pooped on it" 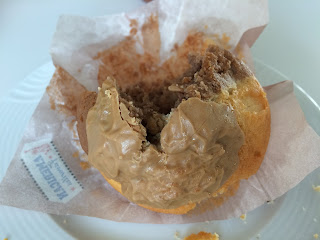 My concern for Toni Marroni is that there is a lot of Swissness and not much American Favorites about it. Roasted chestnuts and caramel candy reminds me of fall fair. 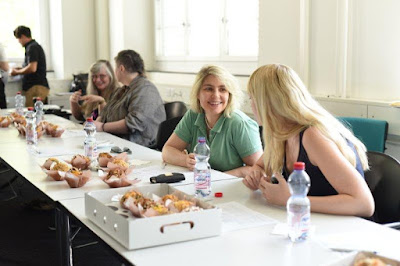 The girl I'm talking to in this picture was part of the team that went through a brainstorming session meeting to create fall muffin ideas a while ago.

My other favorite was the Cinnamon/Prune one. Delicious! Very intense prune sauce filling.

All the other muffins that explicitly contained cinnamon unfortunately didn't smell and taste the part.

The pastry chef who actually made the muffins was present, too, and he took all of our comments very well. He explained that they went easy on cinnamon on purpose because it contains coumarin which obviously has a bad reputation for harming your liver.

Wow, I have never heard that. Even now, after looking it up, I fell like WTH, I drink Coke Zero, I'm sure a little coumarin won't kill me. Bring on the cinnamon! 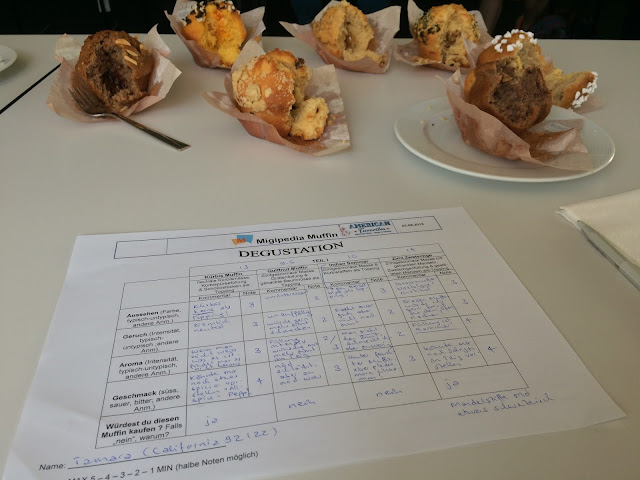 PS: I mentioned "Indian Summer". When i hear Indian Summer I can see blue skies, sunshine and colorful leaves, lots of them.

The muffin they named Indian Summer was not colorful. Still I think it's a great name for a food item. I'm not thinking about fall yet, but once I start doing so, I will try and come up with my own ideas of fall muffins. I certainly missed a good old Cinnamon/Apple one here. The pictures that I obviously didn't take myself because they actually show me, were provided by the professional photographer who joined us. I didn't catch his name, but thank you, Silvia, for sending them to me! :-)