While I used the ones I got to tell you about out Office "Christmas" Dinner  I submitted the following "words" (I thought they were cool):

Jenniy did really well, check out her post here! Other bloggers commented how grateful they were for not getting these difficult words, and I was like "come on! They're not THAT hard!

So today I'm here to prove it.

I posted another post called "how to get your kid to take their meds". It's light-hearted. Ugly tasting cough syrup for your usual kid's flu, you know. Colin was just getting over one - again. Or so I thought.

Instead yesterday morning he couldn't use his legs.

He said they hurt, and he couldn't walk.

I tried not to show how shocked and worried I was. Carried him to the kitchen for breakfast. Carried him upstairs to the bathroom, trying to think of something to do other than crying and hoping it would go away on its own.

Did I mention I work on Fridays.

Well, not this Friday.

It is not always beneficial to work for my husband, but on occasions like this? He'll gladly ask me not to go to the office and instead to take care of our son! I'm pretty sure what he meant was "call our pediatrician and make an appointment".

As friendly as our doc is, his reachability and his availability isn't. It's a 9 to 5 office. Even at this time of year, cough, sniffle, sneeze!

So I carried my son down to the garage, and we were on our way to the hospital. My plan was to arrive at the kids' ER before the big rush, and we were lucky enough to be triaged and placed in an exam room pretty much right away.

It may have helped that I carried my 7 year old boy into the admission area with an expression on my face that said "help him NOW!" 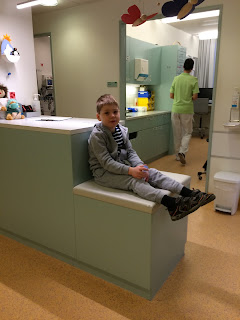 What I like about medical professionals - they have seen it all. They don't flinch, and they're not like "OMG, that poor baby!" They ask how long has it been going on, where does it hurt, any allergies? They take the temperature, they fill in a form, they get busy! 1,2,3!

A nurse settled us in, gave him some pain meds and applied numbing cream on the crooks of both arms for a potential blood draw later.

We were first seen by a med student who introduced herself by her first name. She was very nice, took a text book history, checked his heart and lungs, made him "walk", asked "does it hurt or does it just feel weak", smiled at him and asked what sports he liked.

When she left the room to go and present to her resident, I could tell she had no clue. 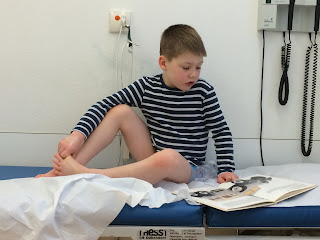 She came back with her "boss" who introduced herself as Ms Doctor Last Name who asked the exact same questions. I immediately disliked her. Didn't she trust her friendly student? Also she directed all of her questions to me. He's 7 years old, his legs hurt, but he can talk!!!

At least she had an idea on what might be going on with him.

Myositis, Inflammation of the muscles due to his viral infection. It happens, it goes away after a couple of days, in the meantime you give pain meds and only walk as much as you feel comfortable to.

She still needed to confirm with her attending, she added.

So we waited. I got him a chocolate milk from the vending machine. It only accepted coins. There was no coin changing machine, so I asked the lady at the admit's desk. I thought she must have a petty cash money box or something. Instead she reached for her wallet and dumped her coins on the desk. 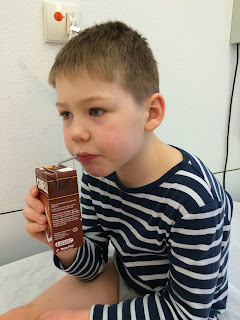 So even in a hospital the vending machine is full of the usual unhealthy stuff. Sodas, candy. Whatever happened to 5 a day?

We waited some more.

Then both ladies returned at let us know that their boss requested a blood draw to rule out something about the kidneys.

Not only did I know that this was going to be difficult for him, but how long did we have to wait


"We're a busy hospital, the lab is usually snowed under. Just hang in there. You're welcome to check out the books in the waiting room."

"There are only books for babies", C said.

I tried to negotiate. Can't we go home, and you'll just call with the results? We can always come back?

Absolutely not. We're not to release you until we have all the facts.

In the meantime it was almost 12 noon, our stomachs were growling.

I assumed a trip to the cafeteria was out of question as well. Back to the nice lady at admit I went. "Isn't there some kiosk nearby, like a 7/11 where we can get a sandwich?"

I got him crackers, a mango smoothie and a Disney Planes magazine! 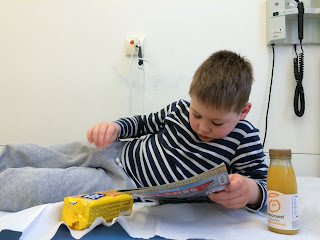 And we waited. It was getting old.

The blood draw did not go well. The nurse was trying to be patient and was all about "I'll be gentle, look, we'll count to three, 1,2,3!

He withdrew his arm.

She was taking her sweet time, talking, preparing the area,...

Come on, do it already, it's only getting worse!

He was screaming and crying. Poor guy.

"I knew that this numbing cream was a scam! I knew it all along!" He was upset.

When he calmed down, he saw a chance of making the best of if.

"Mommy, since I was such a brave boy, do you think we could go to the toy store afterwards?"

Well, I don't know. Can you go? As in walk? From the parking lot to the store?

Didn't think so either. 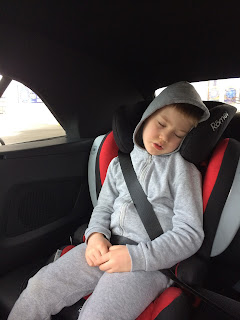 With a little help, though... 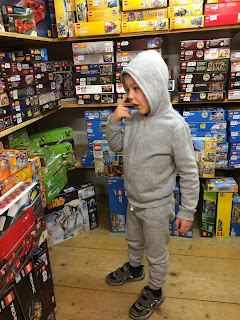 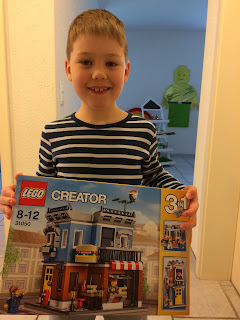 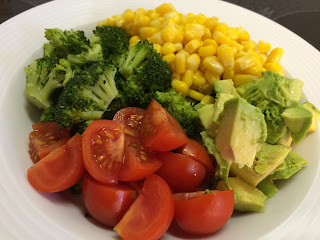 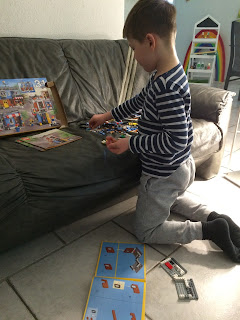 I helped. I assembled the people and sorted all the pieces by colors. 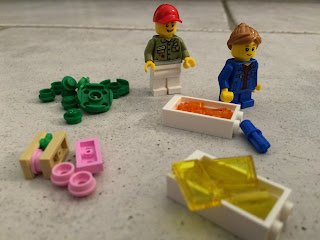 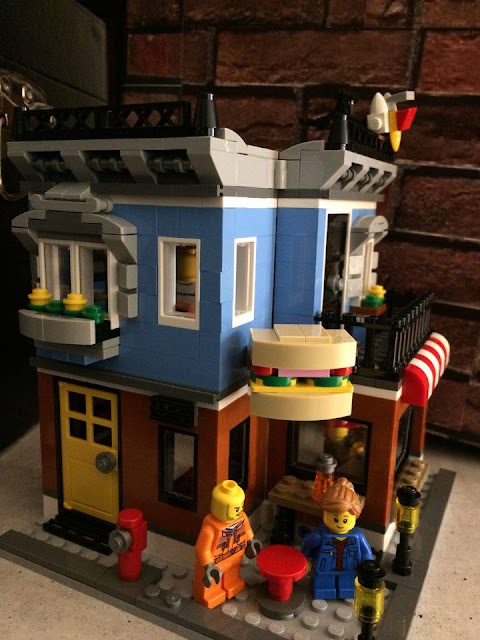 Today is Saturday. His legs are much better. I might get to my St. Patrick's Day crafting project this weekend. Our LEGO man needs a 4-leaf clover, don't you agree? 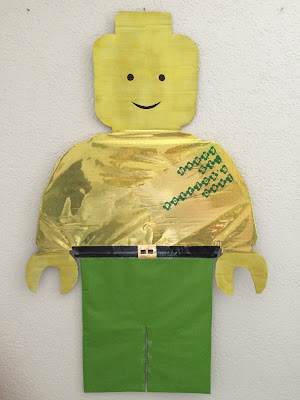