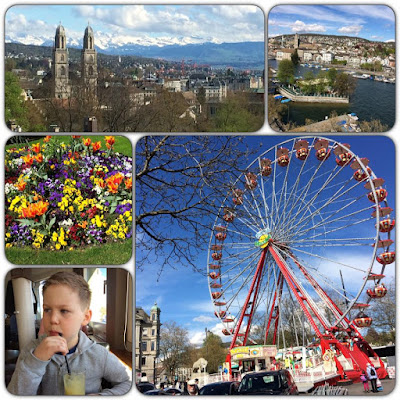 Zurich is my home base where airports are concerned.I talked about the airport (where I used to work) in last year's A-Z so this time let me take you to the city.

Join Colin and me on a gorgeous spring break day on the town!

Well, at first we weren't so sure about gorgeous. It had been raining in the morning, so we only drove into the city before lunch time. We like to make our own pizza by choosing from the 30 or so ingredients at Sam's Pizza Land. 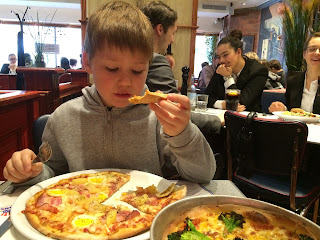 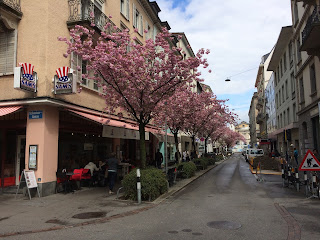 When in town, check out the toy store! 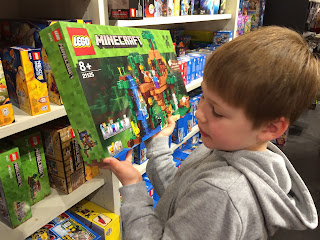 The blue sky is coming along nicely! Bahnhofstrasse, our Fifth Avenue. 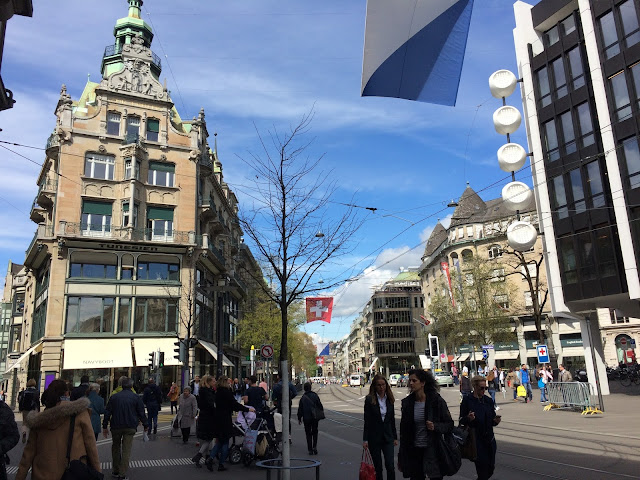 Colin was done with his hair appointment and ready for a snack.
The macaron of the month is strawberry/rhubarb. 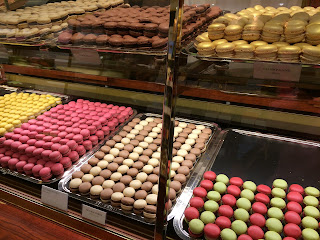 Let's hop on the tram that takes us to the ferris wheel! 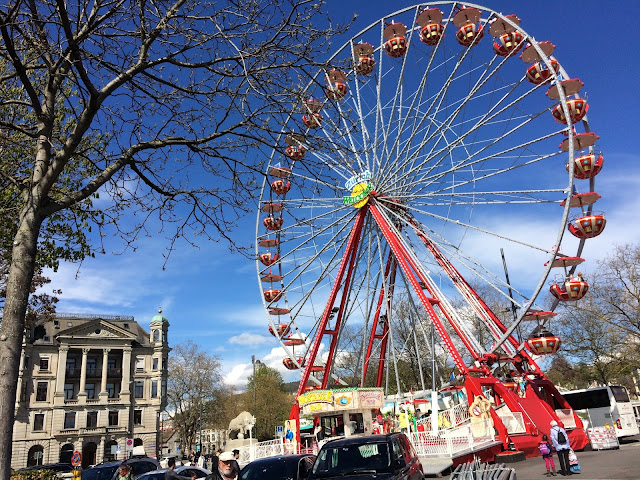 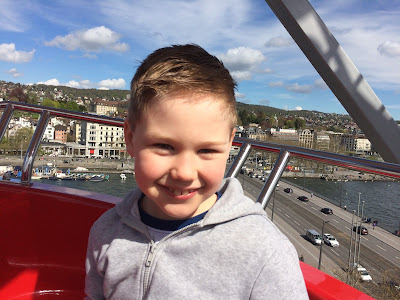 Look how small the cars are! 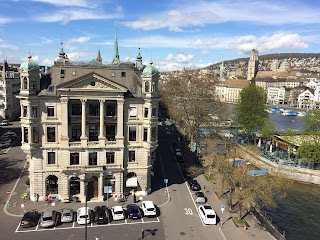 Mom wants a selfie to capture the happy moment! 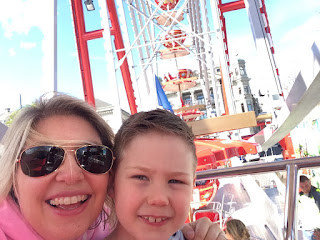 Back on the ground we admired the pretty flowers. 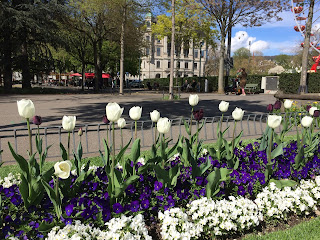 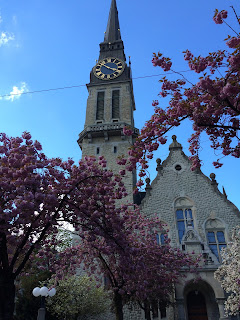 The young man must be going through yet another growth spurt. More snacks, please! 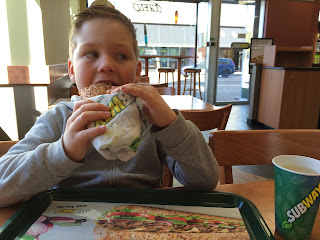 I don't know where he gets his questions from, but out of the blue, over his sandwich, he went "how can we be sure that Jesus existed?"

I said we can't be sure, we just choose to believe he did. And that there probably was a man who was doing good things to people, and word got out, but you know how it is, everybody tells his story in his own way, and by the millionths person the "facts" have changed. Kind of like the telephone game.

Either way, to me it isn't all that relevant if there was a Jesus or not, I think it's much more important how we treat each other today and tomorrow.

C nodded and went to the bathroom to wash his hands.

That's when I witnessed a modern day's Jesus. 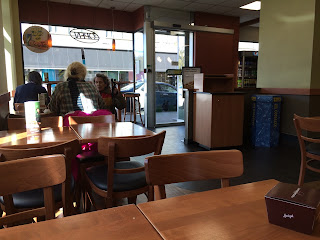 The lady whose back you can see, noticed that the woman who sits across from her entered the restaurant and studied the menu. She must have looked hungry, and something told lady #1 that lady #2 didn't have the money to buy herself a sandwich.

She approached her and asked "may I buy you a sandwich?"
After some back and forth they went to the counter and ordered.

I was stunned and delighted.

You can see people begging for money at the train station and in front of department stores, and many times when you ask them what they need it for they say "food", then you offer to buy them food, and they tell you they'd much rather have cash for later.

I didn't catch the conversation they had once they sat down because I told Colin about it when he returned from the men's room.

"How did lady #1 know that lady#2 didn't have money, and if she didn't have any money why did she step into Subway in the first place?"

We don't have all the answers, but we can watch and learn, right?

This encounter made my already perfect day even better.

Just as we got ready to leave, our Jesus lady left, too, and we gave her the thumbs up. 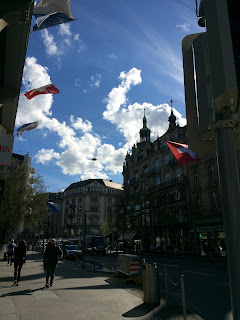 We usually park next to the observatory, and I always tell him that there is a bar on top, but we never go. This time, with hubby out of town for business, and it being spring break, and just because - I said let's go up there!

So this is the view from the 10th floor. Pretty cool, isn't it? 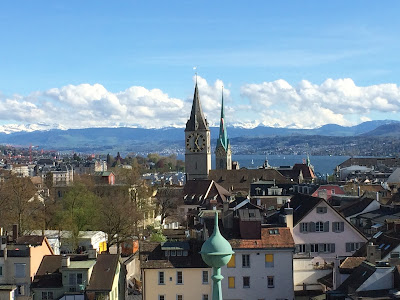 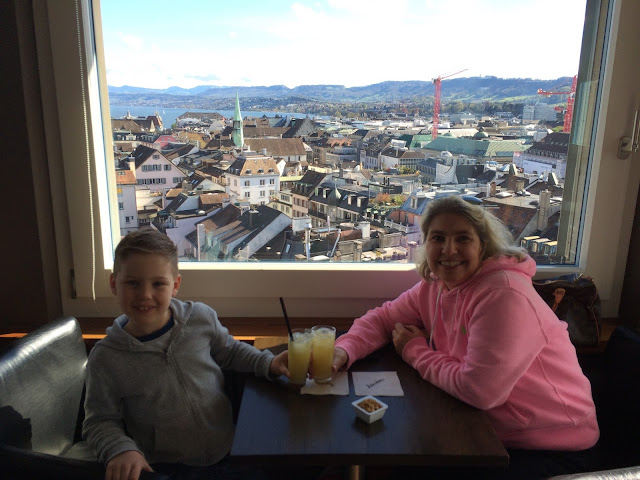 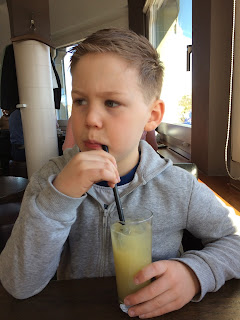 All of a sudden he jumped up and said "I think something isn't right with this pineapple juice" and ran. All I could do is shout after him "there is no bathroom on this floor, you need to go downstairs, will you be OK?"

I paid for the beverages and followed him, meaning, waited outside the men's room.

"Let's get out of here" he said. "Maybe I'll have to throw up, and I probably shouldn't do so in the elevator."

When did he become so grown-up?

We sat on a bench, and I was desperate to say or do something to make him feel better. 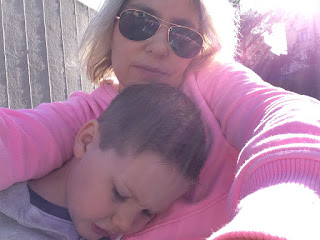 Bingo! The Panini Album! It's a sticker album for European (or World) Championships in soccer. Colin's friends gave him the stickers they don't need, and I got him the album that day, so he was busy going through it, and after a while he felt better and we got home without any incidents. 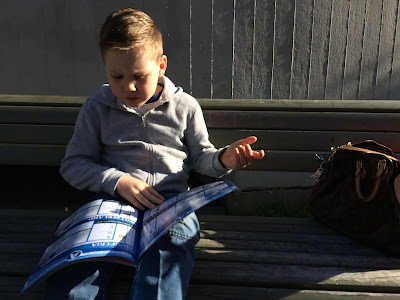 Zurich is not Switzerland's capital, (Bern is), but Zurich is with 400k citizens in the city and 1.8 mio in the greater area the largest and economically most important Swiss city.

If you're a student, chances are you attend Uni Züri or ETH, and if you're a banker, you most probably work in Zurich. The first Starbucks store in continental Europe opened 2001 in Zurich. That's about everything you need to know ;-) 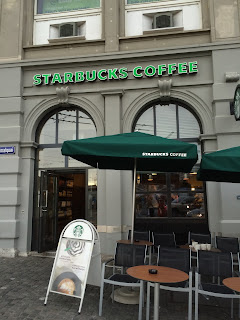 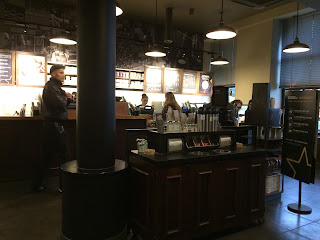 Thank you for keeping me company throughout my A-Z journey! I hope you had fun!