Use Your Words - Jump Rope

May 13, 2016
Today’s post is a writing challenge. This is how it works: participating bloggers picked 4 – 6 words or short phrases for someone else to craft into a post. All words must be used at least once, and all the posts will be unique as each writer has received their own set of words. That’s the challenge, here’s a fun twist; no one who’s participating knows who got their words and in what direction the writer will take them. Until now.

They were submitted by The Angrivated Mom - thanks, Steena!

Alan, the Alien, has been with us for a while, and it's been interesting. Every day he's asking questions, and we try and answer them as best as we can.

I took him to a business convention. 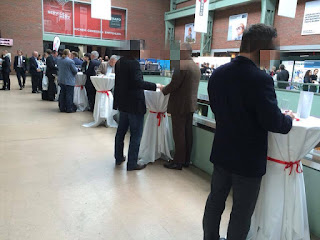 "Why are there only men, and why are they all dressed in gray or black?" He asked.

I talked to him about business attire and the fact that we like to blend in.
Everything has its place and order. Keep it neat and make no mess. Don't be loud. Don't be pushy, wait your turn.

I also told him about the share of female managers in Switzerland being only about 30% (and I even suspect these numbers were whitewashed by the government.)

Oh, they're plenty clever. Up until they have babies. Then they become a liability. They want to leave early to pick up the kids. Male bosses and envious female coworkers don't like it.

He shrugged. "You look nice in your pink shirt" he said. "Even though you don't exactly blend in." Thank you, Alan, I am OK with that!


"OK, now I'm curious, I thought those were all business people, who is that guy???"

I know, I was wondering about that, too! This is André Blattmann, our equivalent to the chief of staff of the U.S. Army. Just like any other business leader he talked to us about his challenges, and I was very positively surprised about the fact that he came across much more "human" and witty than I expected (biassed much? I admit it.)

In fact he's so reasonable and cooperative that conservative politicians wanted him gone and were pushing for an early retirement. Too bad, right, Alan? As a citizen I felt I was in good hands there.

The next day we went to recycling paradise. There are large containers for every valuable substance you can think off: glass, aluminium, iron, paper, cardboard, plastic, electronic waste... 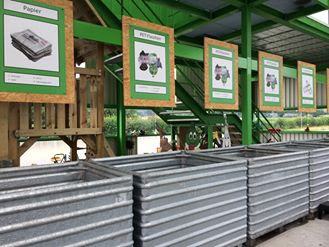 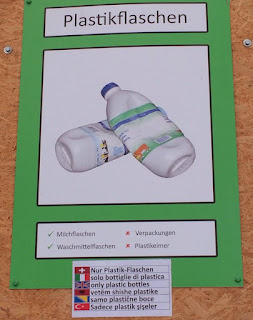 "Why do people leave spray cans or aluminium mayo tubes in here? Can't they read? There is even a sign that says what's OK in Albanian or Bosnian?" 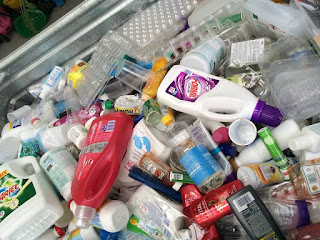 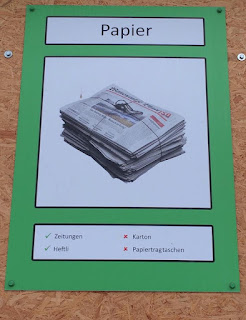 Newspapers, magazines: OK.
Paper bags, cardboard: not OK (there is a separate container for that right next to this one!)

"Who on earth thought it was OK to dump a garbage bag full of crap in here?"
Alan is furious. "Didn't you tell me that everything has its place and order and to keep it neat and make no mess? Don't these people care at all?" 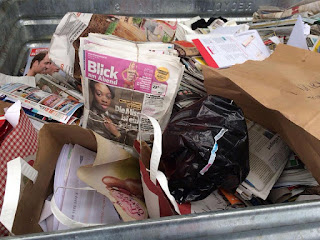 Sigh. He's so right. How do I tell him that a notable percentage of our fellow citizens are inconsiderate assholes? He hasn't even mentioned the ones cutting lanes and occupying two parking spaces yet.

The other day we were talking about the good old times' games we used to play as kids: Cat's Craddle, Chinese Jump Rope, Cops & Robbers, Hopscotch,...

While today's kids may still do some of this, the fascination of video and tablet games is huge, and especially on a chilly, rainy day it can be hard to get them outside for some fresh air.

Add to that the fact that walks are sooo boring!

I came up with a couple ideas on what to do with kids on a rainy day, but most are city specific, and we can't do them every time in rains on us.

Sunday before Mother's Day was this kind of day. We didn't have any concrete plans until Doris texted "we're heading to Trampolino - wanna join us?"

Hubby was thrilled to get some me-time at home, so Colin and I left the house, and when we arrived, there was a cordial reception! 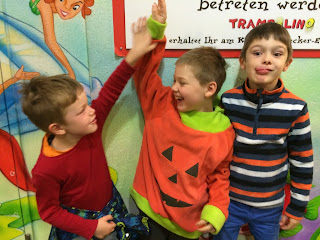 "She had to go get cash at the ATM. They don't accept cards." 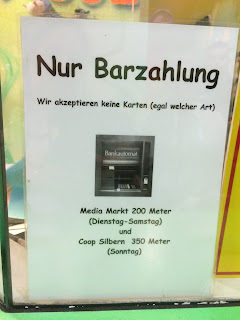 When we finally got in, I was as if I was struck by lightning!

OMG - the noise! The shrieking, the whining, the shouting!

D and I were looking for a place to sit down and told the boys to come by frequently.

"How long do we have to stay here?" I called out to her. Geez, we couldn't even have a decent conversation in here! 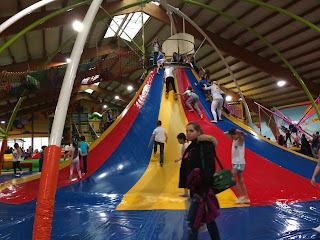 This lady was obviously a pro and brought her earphones! 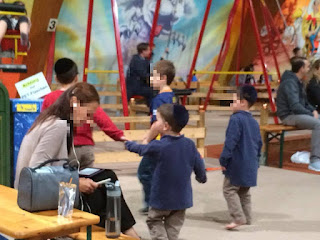 The smoking area doesn't have a door. Every now and then some wads of smoke would make it our way. Eewww!

"Why are people not cleaning up after themselves?" Alan pointed to most of the tables. Empty bottles, trash, crumbs, gross! 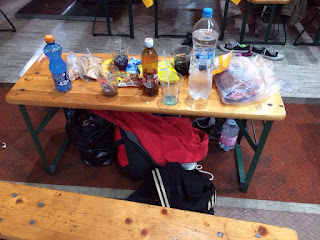 "Because they're effing pigs" I mumbled.
"I thought you said you like it neat, and you're not supposed to make a mess?"
Darn right. They obviously didn't get that memo.

The place allows people to bring their own food which is only fair considering the entrance fees. Which have to be paid in cash.
As it turned out, Doris had to leave a five (!) bucks' deposit for her coffee mug. That's the way it works. 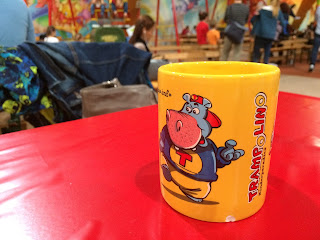 Then Alan wanted to know: "Why are those guys wearing their pijamas in public?"
Ahem, Alan, those are not technically PJs. They are dressed in what is culturally their custom. 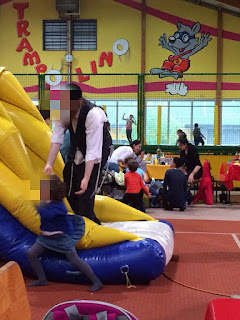 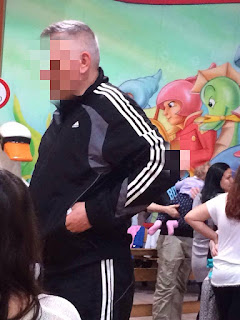 PS: the blurry faces in the pictures were made with an app called Fotor. This is more for myself to remember than anything else. Plus I wanted to use my words! ;-)

"How about those guys? Do they think their butt is pretty?"
Baahahahaha, Alan! Frankly, I have no idea! 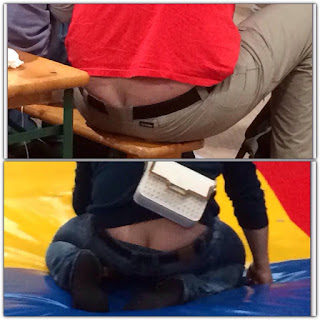 I made a strategic error: I drank a bottle of water which caused the urge to go to the bathroom. Only this place was so filthy I was afraid to. There was no way I could hold it, though, so I braced myself.

It was about the way I'd imagined. I'll spare you the details. Let me just tell you I was baffled by the signs they stuck to the bathroom wall:

"Don't wash your feet in the sink",
"This dryer is for hands only. No clothing!"

What the h*** are people doing in there? Bathing their kids and doing laundry?

Good thing our guys turned up for some water every now and then. We negotiated another half hour and we would be out of here! 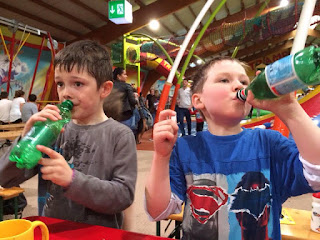 A much deserved sandwich in peace and quiet! Thank you, Subway! 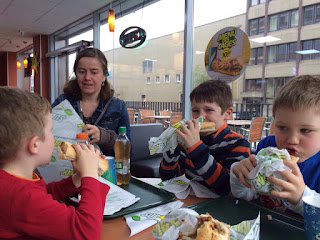 We talked to the boys about common decency, and they told us that some of the kids were not behaving very well at that playground. Also most grown-ups didn't seem to care, they noted. How were their kids supposed to learn?

On 11/11/1999, Terry Kelly a blind musician, was in a Canadian drug store when they made an announcement, that at 11am they would like everyone to observe two minutes of silence in honor of the troops. Everyone but one guy showed their repect. Kelly was a bigger person than to just give that guy a dirty look (or take his picture and use it for his blog!) - he made a song, a pittance of time:

PS: the one time I went groceries shopping without Alan (I had a GYN/OB appointment and wasn't ready to answer those questions!) I ended up on TV! There had been a robbery a while back, and luckily they caught the guy. The store clerk was just being interviewed when I left: 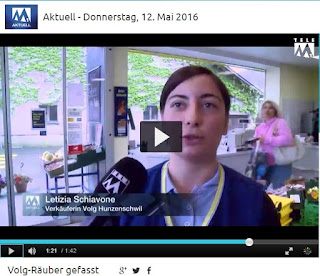 It's great that they arrested the robber.

More importantly there was also an individual who killed an entire family at their home and commited arson to erase traces on a regular Monday morning in December in my other neighboor village.

For a long time police had no leads. They called up the public which they never do. From time to time I thought "what if these people were random victims, and the perps remain at large? What if they choose our house?"

A press conference today at 3pm (an hour before this post was due) revealed that they have arrested a 33 year old man who not only confessed to the obvious crime but also to having raped the 13yo boy and that he had plans of doing more of the same. So glad this bastard is in jail.

People leaving their trash behind or in the wrong container is one thing, but stealing and murdering is quite another.

We have been living in a quaint little area, the worst crimes around here involve running a red light or not paying taxes on time - I would like to hope that things will get back to normal now.