June 30, 2016
OK, don't get all confused by the title. I still don't have a clue. It's just that this month's theme of the photo challenge is baseball.

And a challenge it is. In Switzerland baseball is not very known at all. It may have to do with the fact that there is a strike ban in our country?! Hahaha!

If you type "baseball" into the search box of Swiss sports equipment stores, all you'll get is a Yankee's cap. Surprisingly there are still 20 clubs, none in my state, though. I wonder where they purchase their gear.

No excuse, though. As we have learned last month, it's important to think outside the box, right?

So let me think.

They have pitchers in baseball, right?

They have pitchers at Starbucks as well! They use'em for steaming the milk!

Can you imagine how happy I was to find out that a cup of coffee is a baseball term for a minor league player who spends a short time (just long enough to have a cup of coffee) at the major league level?

Hey, I can do a cup of coffee! I usually have a doppio espresso. For this post's sake I was happy to order a triple = three base hit!

Also, there is a Starbucks term for the person who switches from one station to another in order to support their busy fellow baristas, they're called floaters. 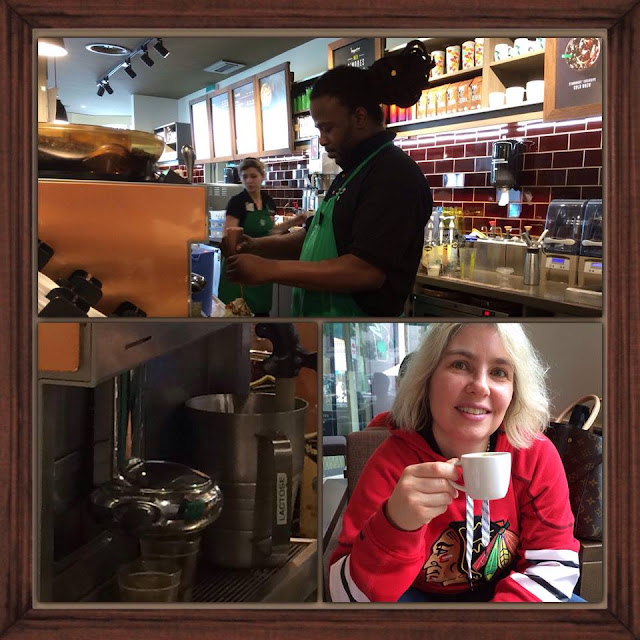 Where there's a pitcher, there's a batter, right?

I can make all kinds of cake batter! I understand a player who is striking out five times in a game, is getting a platinum sombrero, aka olympic rings?

There you go, Olympic Ring Cakes! 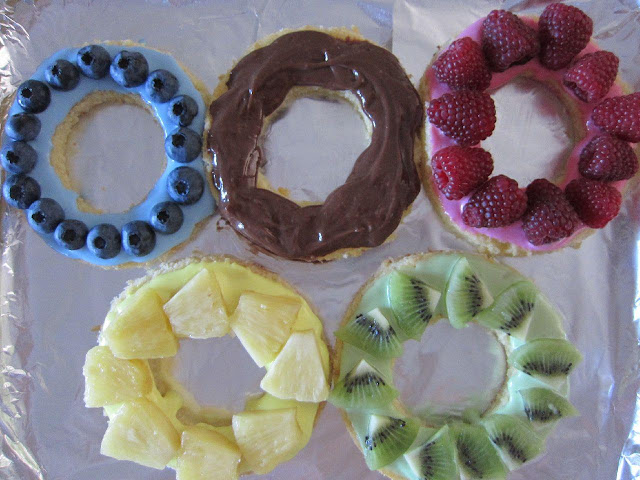 I'm getting the hang of this! On Father's day we had brunch at a sports bar. Guess what, on the paper placemat there were all kinds of ballgame players!

Oh, and on the menu, apart from egg varieties? Bread and butter! A player's most reliable skill, as I've learned from a glossary. 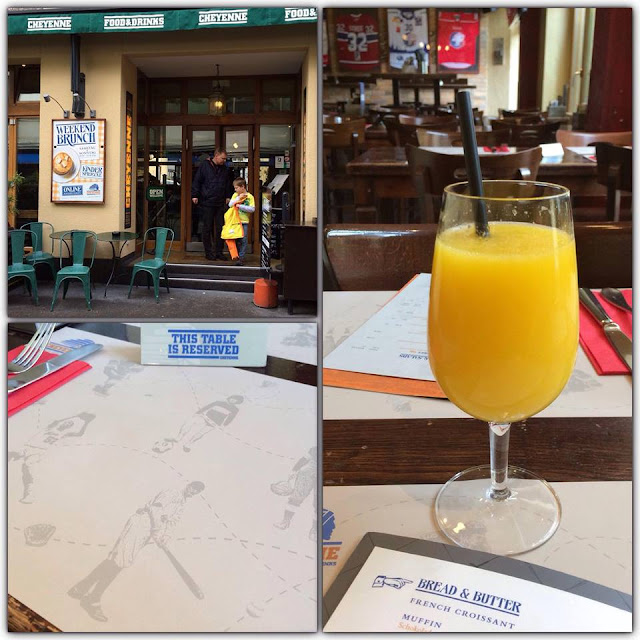 I went through the month of June, just keeping my eyes open for photo challenge opportunities. I was presented with another one when we had lunch @ Subway.

If a free agent signs with a team that the player did not finish the previous season with, his former team will receive a sandwich pick for the departed player.

For us it was what it was: a sandwich pick...

First your bread, then the meat and cheese, finally lettuce, veggies and sauce.

PS: Did you notice Colin's Padres cap? My friend Lucy got it for him when we met in San Diego this spring! 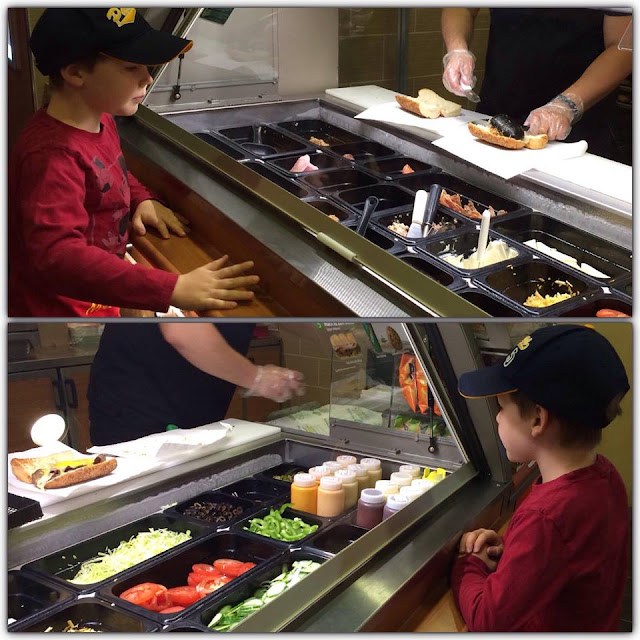 Of course I actually wanted to watch a real ballgame, though. As we found out from the schedule there were going to be some games only half an hour from here on a Saturday.

As I was sneaking around the field with my camera dangling around my neck, I noticed a guy who seemed really pumped. I asked him if they minded my being near the player's bench? No, no, go ahead.

A couple of minutes later he introduced himself as Wayne and said "listen, it you're gonna take pictures here..."

Oh-oh, are they camera-shy? Do I need their marketing person's permission to use the photos for my blog?

As it turned out, originally from NYC, he is kind of a baseball legend here in Switzerland, and he was giving his comeback today after a long phase of being injured. 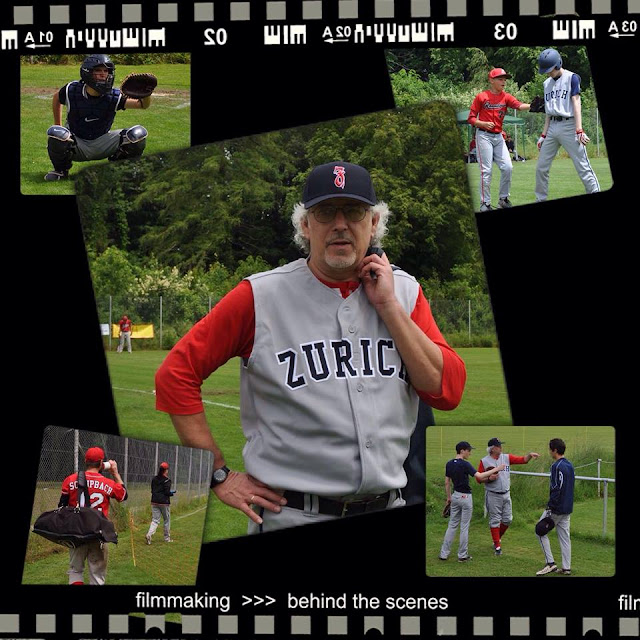 I also met his wife who was very friendly. She tried to explain the rules and gave me the location of the only real ballpark in Switzerland! As it turned out, it's super close to my favorite mall, and I would have never found out if it weren't for this challenge and Suzana!

Even though this month has been more than crappy weather-wise, we were lucky enough to catch a game! 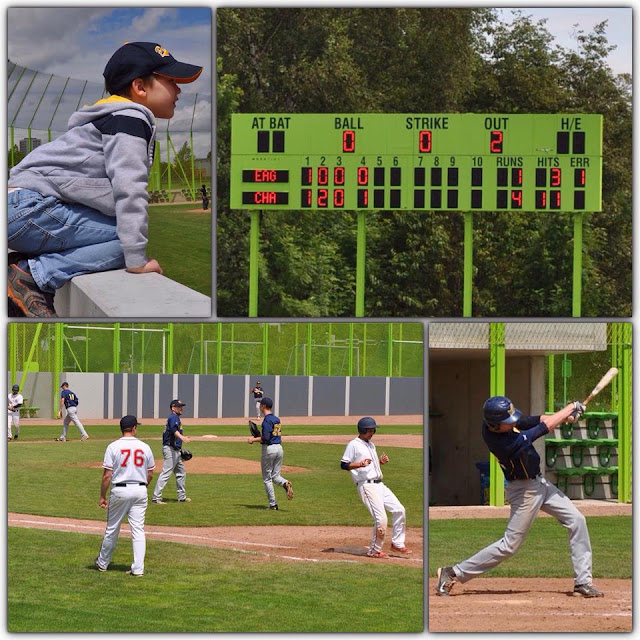 So I'm kind of sad that I'm already done with my challenge. There would have been so many cool ones that I wanted to try:

Like window shopping (caught looking for strike three).
Or being caught napping (a baserunner who wasn't paying attention to what the defensive players were doing.)

Anyway - I hope you are having as much fun with this post as I am! Now head over to the link-up and check out the other posts!

See you next month!