Use Your Words - Cabernet

June 10, 2016
Today’s post is a writing challenge. This is how it works: participating bloggers picked 4 – 6 words or short phrases for someone else to craft into a post. All words must be used at least once, and all the posts will be unique as each writer has received their own set of words. That’s the challenge, here’s a fun twist; no one who’s participating knows who got their words and in what direction the writer will take them. Until now.

They were submitted by Southern Belle Charm - thanks, Minette!

What does TGIF mean to you? 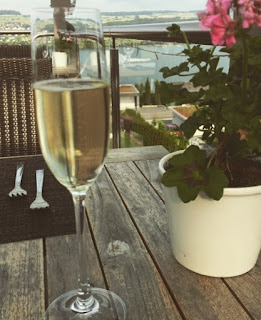 Caution! Trouble Ahead - It's Friday!

The day before the Friday I'm gonna tell you about, was Ascension, a public holiday around here, and therefore on Friday many people are taking a day off work to make it a long weekend. Teachers, do it, too, meaning Colin was going to spend the entire day at his daycare.


When we said goodbye in the morning I asked him "so are you gonna do something exciting today?"

It was about 9am when daycare called my cell phone. I always cringe when that happens.

Well, you know what was up today, right?

Nope. They were just asking if there was a reason he didn't bring his bicycle? Didn't we want him to be able to attend the outing they planned on doing?

"We were telling everyone about it upon pick-up this week, weren't you there on Wednesday?" Ummm, no, hubby had picked him up.
Anyway. When were they gonna leave? Any minute now? Well, that's just great. I'll be there as soon as I can. I live for moments like these. Not!

His bike was at my parents'. Called my Mom who was home, fortunately. Picked up his bike and helmet. Took it to daycare, went back to the office.

In the parking lot I noticed that there was a wet spot underneath of what I assumed was the exhaust system. 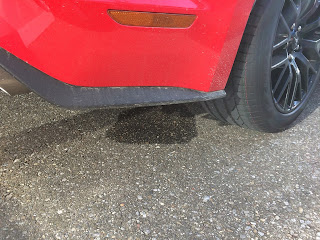 When I checked back, the spot had become larger. I asked hubby about it. He looked at me funny "why are you asking me? Do I look like I know? Ask A!"

A being my coworker. Who had taken the day off, see above. I texted him: 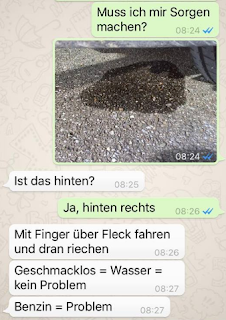 He advised me to touch the liquid and smell my fingers. If it was flavorless I didn't have anything to worry about, if it was gas, then there was a problem.

I couldn't smell anything, but when I noticed that there were now drops, and the wet spot was getting even larger, I decided to rather call road assistance now than in the evening when we wanted to leave.

The friendly guy who arrived about an hour later asked "do you usually drive short distances?" Ummm, yes! He went on explaining about engines, exhaust systems, water condensation, stainless steal vs copper nuts and whatnot.

"You should give your nice car a break and go for a drive tonight. For at least half an hour, can you do that?"

Sure!! It was a nice spring day, and I pictured ourselves cruising to a nice restaurant at the lake, and having dinner.

Only around 5pm I got yet another call from daycare. Can you believe they said Colin's had an accident, and they were pretty sure his teeth were involved, could I come and get him? 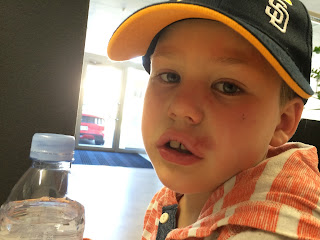 I thought it was pretty ironic that it happened after the bicycle tour. They went to the playground, and it happened just as they were getting ready to return to daycare. "I slipped and fell when we were running around on the rubble" he said. The dentist and his assistant didn't harmonize well with each other, and he was pretty impatient about it. Also he has a unique communication style which makes it hard to follow directions.

Here's an example: he showed me how to apply a special gel to Colin's gums. I needed to do this three times a day, he told me. 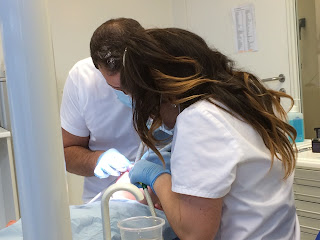 Before we left he told her to give us an appointment for Monday and the prescription. She did, and it was written out to a completely different name and address, and it contained  an antibiotic, a painkiller syrup and an antibacterial mouthwash.

That very moment the doc was walking by, slipping into a jacket made of some special fabric, ready to go home, and I stopped him. "You told us we need a gel, now there is a gel AND the mouthwash - do we need both?"

"The mouthwash is fine. Take care!"

Out the door he went.

"Can I get it tomorrow from the pharmacy or is it very time-sensitive?" I asked the assistant. She was looking into the direction of the exit door that was just closing shut as the doc left, she seemed kind of shell-shocked. It was obvious that she had no idea what to tell me. 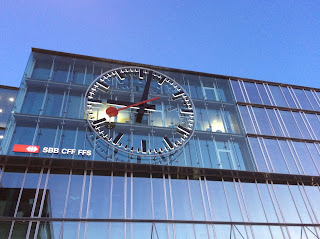 Can you believe, as we were walking towards our car, C went "now that I've been such a brave boy, can we go to the toy store?"

Of course we went the next day, and he got some LEGOs, even though I'm trying to cut back on "just because gifts".

It is Panini season here in Europe, and some of his friends seem to get a lot of stickers from family and friends. 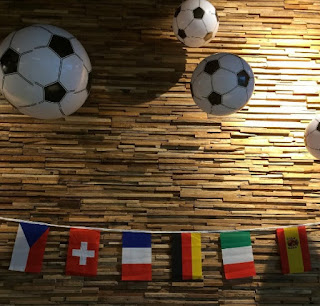 It takes 680 stickers to complete the album, and you know how it works... you have hundreds of duplicates and still not the ones you really need. Depending on where you purchase them, a sachet containing 5 stickers costs between 0.70 and 1.00!!!

So I offered to pay for chores: folding and putting away laundry, loading the dishwasher, wiping the table and the like. He did it once or twice, then he decided he'd rather go play and hope to swap his duplicates with friends.

Fine with me, we have too much stuff in the house as it is!

Just got some more items from the pharmacy for our bathroom cabinet! 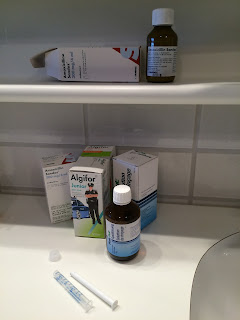 By the way, when I got my words, I read Cabernet instead of cabinet by mistake. Well, we can't really call that a mistake, though, right? After a day like that, a glass of wine would have been more than appropriate!

Not much later, I got the delivery from the tasting, yay! Only trouble was... I couldn't get the cork out... So I had to open another bottle. 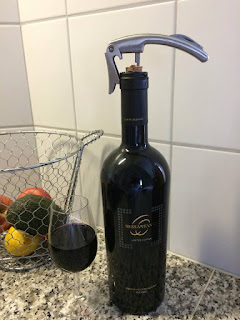 To my surprise I discovered a bunch of soccer stickers on his desk a couple of days later.
When I asked where he got those from, he shrugged. Some kids at school gave them away, and everybody got really excited, until it turned out that they were fake ones! 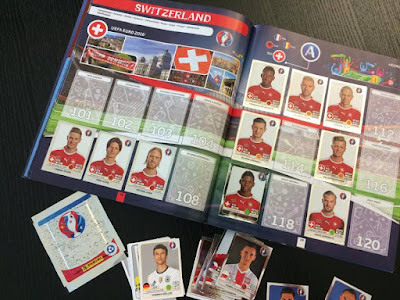 The next couple of days there were very few opportunities for play date and soccer sticker swap party guests. Instead I picked him up from school every couple of days to drive him to the dental clinic right away. 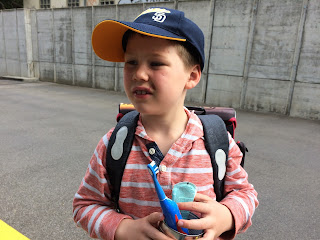 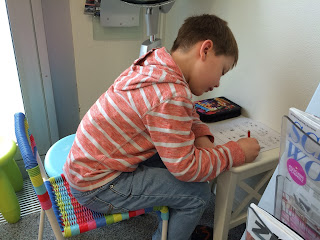 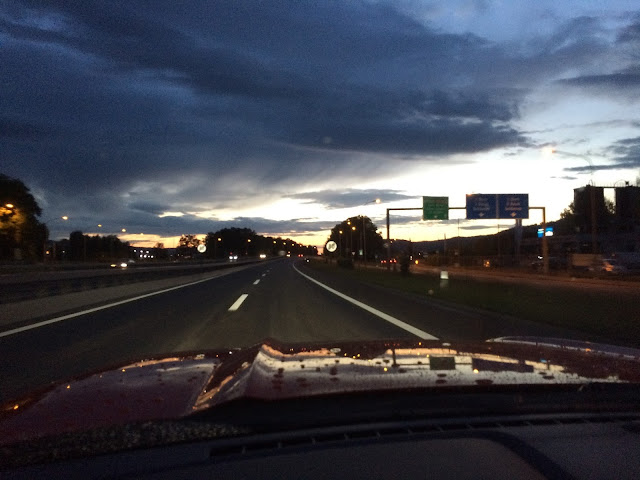 One would think that after that, things went back to normal around here again, but no.

Just off the top of my head.

But I guess this will be for another post. Feel free to submit appropriate words for next month's UYW ;-)

Here's one for the road: Emily Eagan took this picture at Nautical Bean Café in San Luis Obispo, CA. In case you can't read well, there are a couple of hiring requirements, one of them being "to like people or at least to be able to fake it". 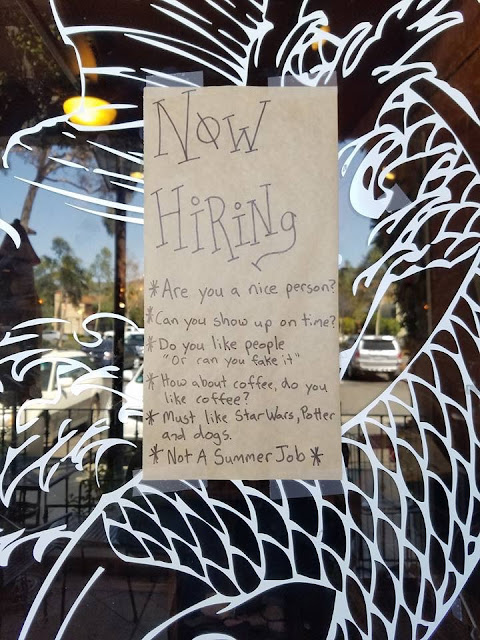