8 reasons to be proud of my 8 year old

September 18, 2016
I can't quite wrap my little head around it. My boy turned eight years old yesterday. EIGHT!

Usually I've been doing lists of ten. Today let's do eight. Because.

Eight reasons to be proud of my eight year old:

Of course school has been easy for him so far.

He's also able to focus no matter the environment, so when we're on the go he'll do his homework at SBUX. 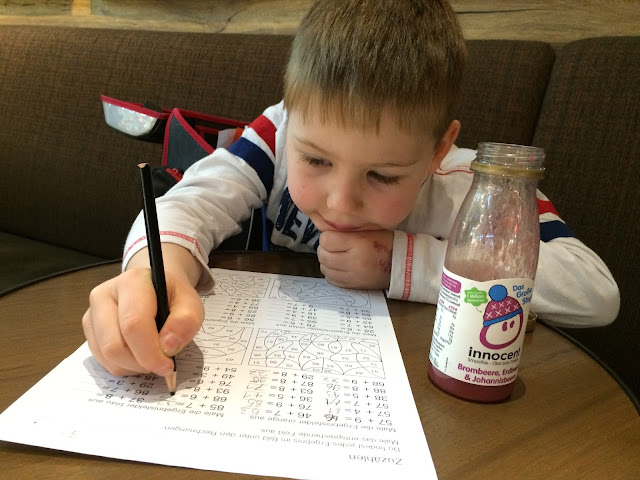 Imaginative
He can probably see all those pictures in his mind when he plays. The most amazing thing he built back when he was watching Lightning McQueen every day was this race car track. 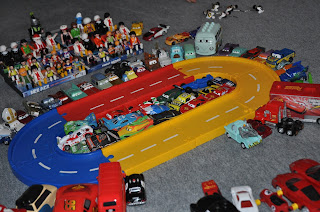 Homework is a bit of a killjoy when one wants to build landmarks out of LEGO pieces! 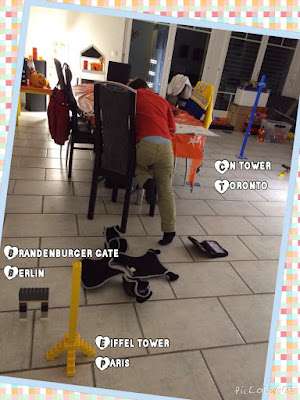 Caring
Now kids usually care about their own needs, and that's OK. I love those little gestures that show me he cares about others, too. For his 7th birthday I brought cake to his school and stuck around to take home the empty boxes.

He first shared a piece with every classmate and the teachers. Of course I brought too much, and he took the boxes down to the school yard where he handed out cake to other friends.

There were also "strangers" who were surrounding the scene like hyenas. Free food! 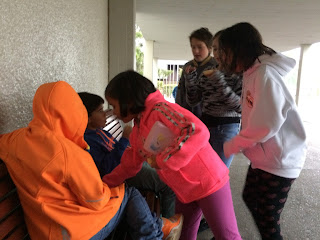 He said. "Now hold on a minute. My Mom baked this and she hasn't even had some herself! Here, Mommy, for you!" Major aaaaaawwwww moment! 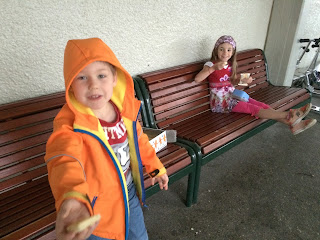 I also think that he is in touch with his emotions. He is pretty balanced. Once he gets mad, it usually doesn't take long and he's back to his cheerful self. I hope he'll be able to keep that quality.

The other day when he had to hand me back the iPad he said "when you have a minute check out what I built for you in Minecraft." Of course I am not familiar navigating this world or underworld or whatever it is called, and I asked him to show it to me: 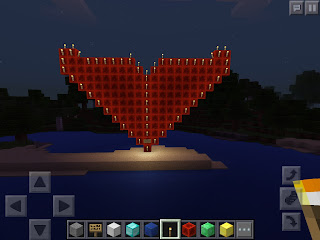 An illuminated heart on an island! Wait, there is more! An inscription! 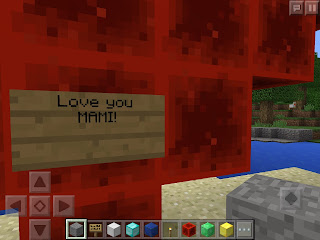 Independent
When he started Kindergarten I saw myself walking him for a while, just like any other Mom. If not not to make sure that he looked both ways before crossing the street, then that he didn't take his sweet time and that he brought everything home. On Thursday of the first week he informed me that he didn't need me to take him anymore. He'd be fine.

But, but, wait! I haven't nearly taken enough pictures! So I was given Friday:

Ever since, the guy is going places alone or with his friends. Of course he is late sometimes, and of course I can't count the snack boxes, hats, gloves or even shoes that went missing. I figure he'll still be like that when he is forty.

Not only does he go to school, daycare, his friends' and my office, I can also send him on grocery runs to our local store just 0.3 miles away.

I just thought the other day that him being THAT BIG has its advantages. He picks his food and balances his tray on his own when we eat at a self service restaurant.  Win!
Right?

Perceptive
Even as a baby he seemed to sense what was going on around him. On my third day or so after giving birth I was hit by a surge of post-partum hormones and I was crying for no reason. Colin was looking at me with his beautiful blue eyes as if he was saying "come on, Mom, I'm here, it can't be that bad, now, can it?"

Fast forward seven years and eleven months, I was on the phone, using my "I'm not gonna yell, but I'm really annoyed" voice and he kept running by, trying to find out who I was talking to and what they did to upset me. I tried to shoo him away.

An hour or so later he approached me and asked "did I unintentionally harass you when you were on the phone?" 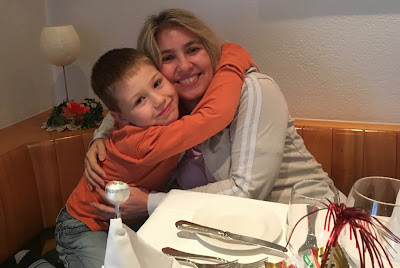 It's fun to be up and about with him. There's always this little thing he'll do that makes me smile. 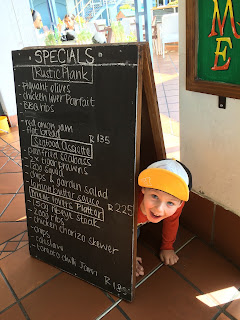 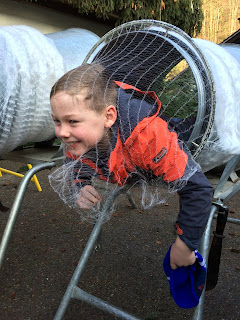 Sometimes I ask him to bring me a bottle of water from the fridge.
He can do better than that! 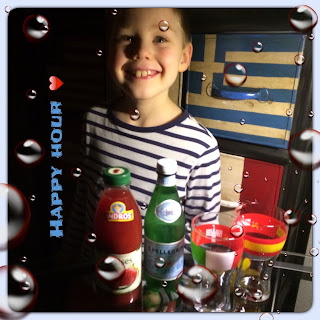 Determined
Ice hockey has been his passion since he was about two years old. The team booklets of the hockey teams have been among his favourite books, that's actually how he taught himself to read. He recognised the players and that's how he knew how to spell their names.
Of course he wanted to become a hockey player himself. All beginnings are hard... 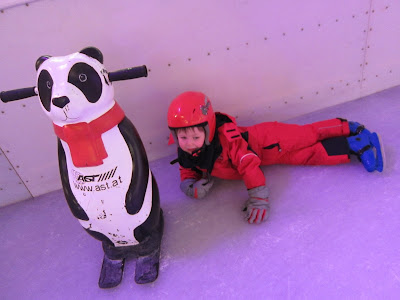 ...but Romano Lemm, one of his idols, told him it takes practice. And look at him now! 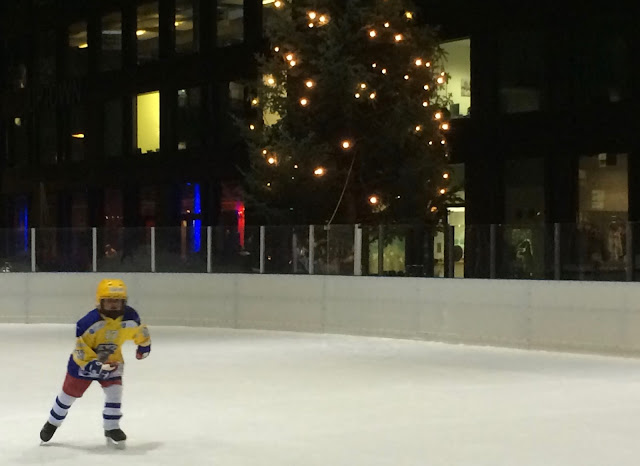 Diplomatic / justice loving
You may say he doesn't like to take sides. When prompted which one he likes better (pasta sauce, piece of clothing,...) he'll probably say "they're both great."
He'll however look out for those who might get the short end of the stick. "But that's not fair" he'll say. 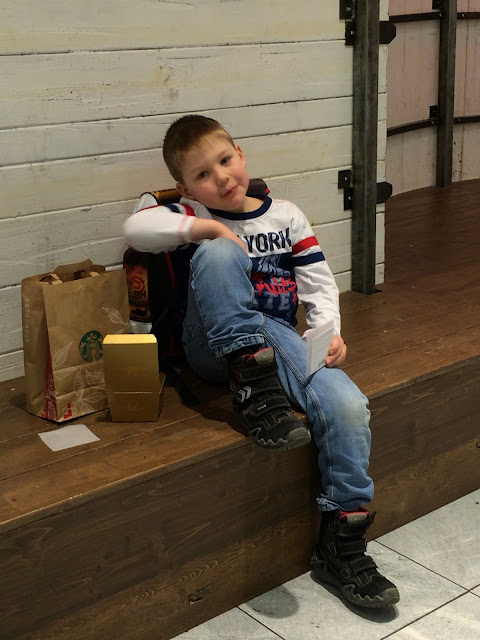 I'm in no rush to find out what profession he'll choose that reflects those awesome traits, but I'm sure whatever he'll do, he'll be excellent at it. Also there will always be tasks he won't master - but he'll have friends or coworkers around who will do them for him....