September 09, 2016
Welcome to September's Secret Subject Swap. Again 11 brave bloggers picked a secret subject for someone else and were assigned a secret subject to interpret in their own style. Today we are all simultaneously divulging our topics and submitting our posts. 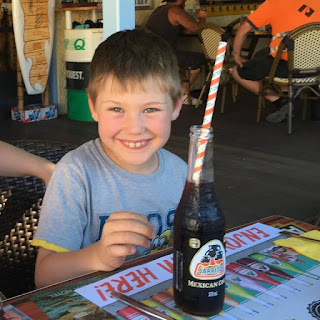 What is the ONE thing that your child does that drives you nuts?

It was submitted by Southern Belle Charm - thank you, Minette!

I was working on 8 reasons to be proud of my son Colin for his 8th birthday. I'm so blessed that I didn't immediately think of 8 things that drive me crazy about him ;-) Not even sure if I could come up with that many, actually.

Of course it's annoying to remind him every two minutes to go ahead an brush his teeth, put on his shoes and leave for school, and I would not mind if he just ate his veggies, cleaned up his room or do his homework without eye rolling and grumbling, but I have (mostly)  learned to not to let it get to me.

There is one thing though, always has been - it's the sleeping. The not sleeping, more precisely.

Since he was a baby, that guy has never been sleeping properly. I'm afraid the apple doesn't fall from the Mommy Tree.


As a new sleep-deprived Mom I was so craving naps myself, and I imagined I'd just feed him, change him, put him in his crib, play the lullaby teddy bear and he'd doze off, so I could go lie down myself. 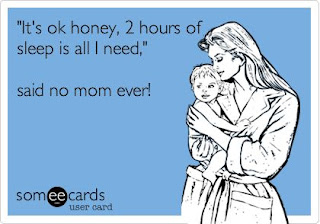 No such luck. He would fuss around, cry and generally be unhappy. He wasn't hungry, he wasn't cold or hot, he didn't need a diaper change, he.just.did.not.want.to.sleep.

I carried him around, I rocked him, I slow danced with him, I talked to him, I sang to him, a number of times I was so exhausted and desperate I actually cried to him "what am I supposed to do, please give me a break!"

Good idea, I might benefit from the fresh air and the exercise myself.

Wrapped him in my wool sweater (nobody told me I needed a stroller blanket! Or maybe i didn't get the memo.) and put him in his new fancy stroller. He seemed excited, as if he wanted to say "Mommy, where are we going?"

Did he close his eyes? No!
Did he fall asleep? No!
Was he at some point, after walking on cobblestone and / or pebble roads for an hour, really, really close to giving in? Yes.
A minute later a friend discovered us and came to say hello. Goodbye sleep.

I could not make a phone call.
I could not stop moving the stroller. Ever.
And I could absolutely not enter a store where there were lights, music and voices. As soon as I did: wide open were his curious baby eyes.

Of course if / when he finally did fall asleep, it was right in front of our house when I needed to go in to pee or make dinner.

And before you ask - forget about transferring him from the stroller to his crib. Not gonna work. Ever. 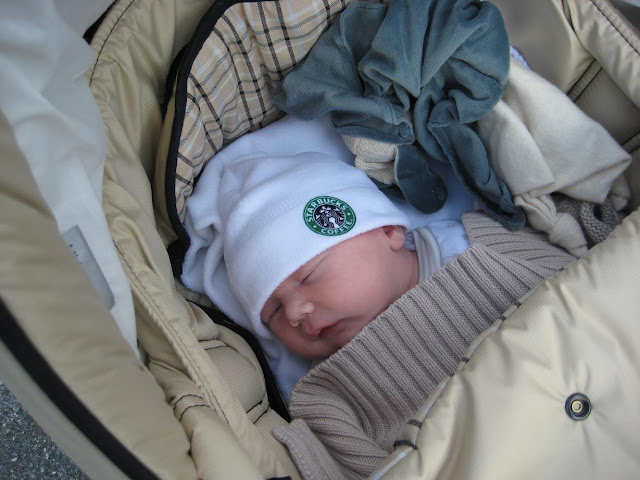 Oh, and if / when he finally fell asleep at night, one was not, I repeat, not to approach his crib for some baby watching or good night kisses. His eyes would miraculously pop open. 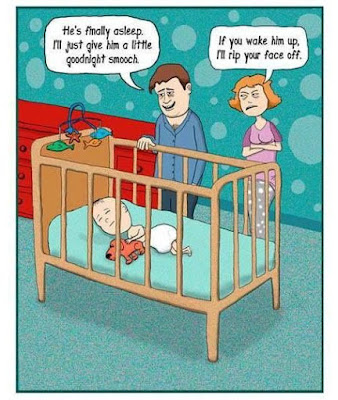 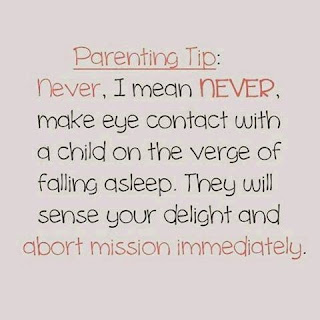 Fast forward 2-3 years when he more or less managed to sleep through the night, he decided naps were for wussies, and he had better things to do. 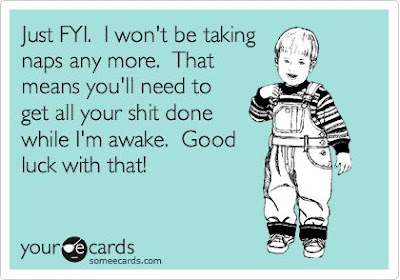 Of course when he didn't nap in the afternoon, he would promptly fall asleep before or during dinnertime in random places and not sleep at night for hours later. 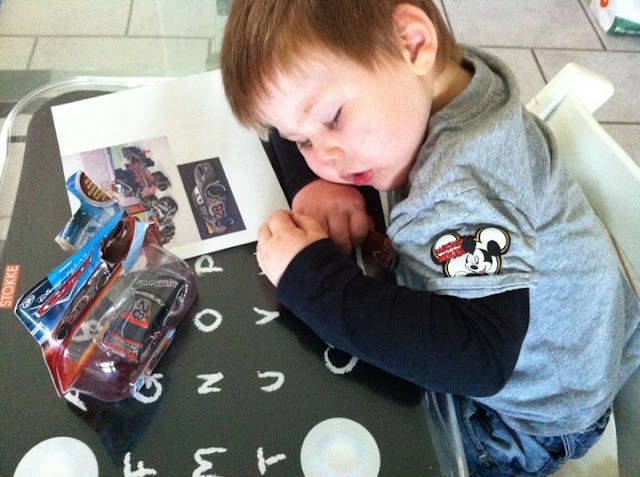 He would sing and talk and call for us, for another story and another hug and another sip of water,… Until he figured out how to climb over the bars of his crib, that is.

Then he didn't need to call for us - he could get out and see us!

I talked to our regular paediatrician, and I went to see a homeopath who gave us some globules. That particular night was perfect! The next? Nope.

As for me I still desperately wanted some quiet me-time during the day. Did I mention he liked to get up at 5:30am no matter how late he fell asleep the night before?

I told him it was OK if he wasn't tired. He didn't need to actually sleep. He could just lie there and listen to some music, or read a book.

Reverse psychology did not work on this guy.

He thought it was funny to sneak out and bug me. "Watcha down', Mommy?"
"May I play on the computer, too?"

I tried reward systems (stay in your room 10 times, you'll get a toy)
I tried threatening (come out one more time, we won't go to the playground)

Hubby and I both snapped at some point. Let me tell you about it.

One night when Colin kept coming out, his Daddy told him that he obviously didn't need a bed and removed everything except the frame. (I had read about this on a parenting platform. One equally desperate family reported great success after they did this.)

Without a word Colin grabbed his stuffed animals, threw in a couple of toys for good measure, lied down - and slept! 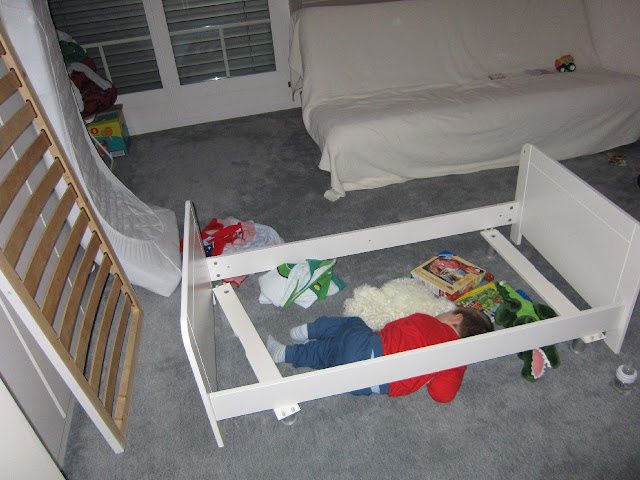 One particularly annoying day I said "OK, scr** your nap, put on your shoes!"

His eyes got wide, so did his smile. I buckled his car seat belt, and he got excited.

"Where are we going, Mommy?"

"To Mommy Rehab - that's a place where mothers go once they can't take it anymore because they are just too exhausted. Its a place where they get to sleep, read, write, paint, and somebody else is taking care of meals and laundry."

"Nope, but they get to visit on weekends - will you be coming and visiting me?"


While we were driving and talking about who might be looking after him while I was gone, he dozed off (of course).


We ended up taking a nice walk in the  psychiatric hospital's park, meeting a couple of donkeys and sheep and having some ice cream. 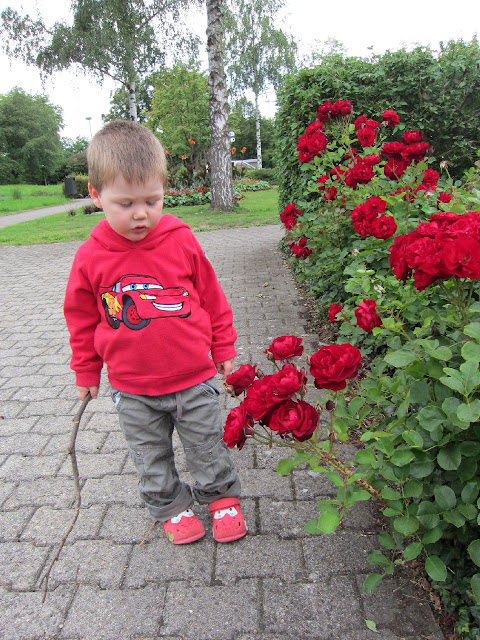 In the evening he told his Dad that Mommy took him to a nice place, but he still didn't want her to go and stay there, so he would try and stay in his room during nap quiet time.

"You have to wear him out, get him to do sports"  people told me, "he'll drop right off" they said.

Good idea, I might benefit from the fresh air and the exercise myself.

Off to the ice rink we went. 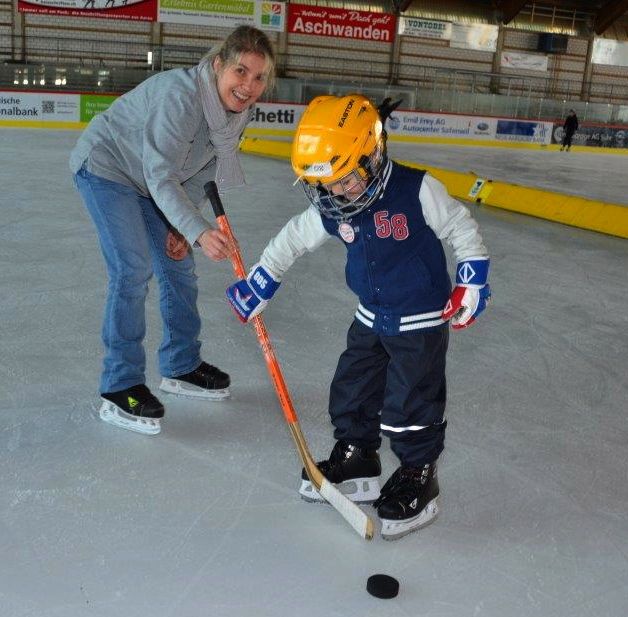 Needless to say, the one who was exhausted and wanted to go to sleep at 8pm was me.

"Just you wait. Once he starts school he'll be so tired from learning all that new stuff"  people told me, "he'll drop right off, you'll actually have to wake him up in the mornings" they said.

Bedtime has become more relaxed, though. We usually cuddle on his sofa and talk. He has the most engaging questions after 8pm ;-)

Also, he reads after lights out. He has his little flashlight, and he brings a handful of books, starts reading one and hides the other ones under the cover. After a while hubby seizes the book. C, unimpressed, takes a break until things have settled down, then he reads his next book. I'm not sure if he is aware that parents actually talk to each other. The other day I went in around 9pm and said "OK, time to sleep, gimme your flashlight and your book!" He handed the items to me. I went "the other books, too!" His face was priceless!

Yet another night I went to his room to watch him sleep. He looks so peaceful when he's asleep! His arm was slumping out of his loft bunk. "How relaxed" I thought. When I looked closer, I noticed that his eyes were open!

I wanted to, but I didn't want him to come with me. That's his thing. He likes to sleep in our bed. He's waiting for his opportunity. Sometimes he manages to actually stay awake until we go to sleep, and then he sneaks over triumphantly. If he actually falls asleep in his own bed, 95% of the nights he wakes up between 2 and 4am, and that's when he crawls under our covers. And we all know what happens then... 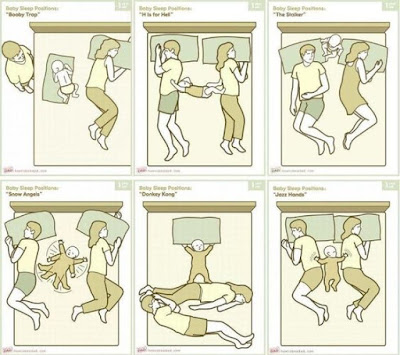 Half an hour later hubby called me over to C's room. "Look at his arm, he's so knocked out!" he said excitedly. "Oh, don't let him fool you, he was like that when I went to check on him. He was awake."

"Oh, he is asleep alright now, believe me! Come on, let's prank him, give me your purse!" 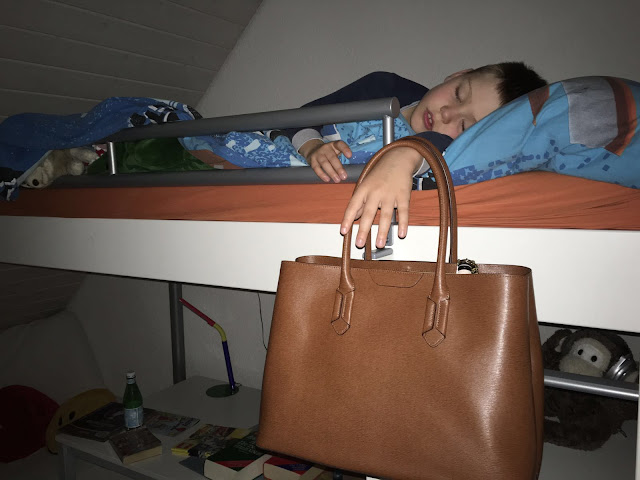 How about you? What do(es) your kid(s) do that drives you crazy?