November 04, 2016
Welcome to November's Secret Subject Swap. Again 12 brave bloggers picked a secret subject for someone else and were assigned a secret subject to interpret in their own style. Today we are all simultaneously divulging our topics and submitting our posts.

Sit back, grab a glass (you may need it) and check them all out:

Baking In A Tornado
Not that Sarah Michelle

Your usually calm child loses his cool and shouts bad language and has inappropriate behavior in a public situation.  You are mortified and embarrassed, how do you handle it?

It was submitted by Never Ever Give Up Hope - thank you, Carol!

I have been very blessed with my happy, good-humored son that it is tough to imagine that we may get ourselves into a moment as described in the prompt.

The nurse who visited us for a routine check a couple of days after baby Colin and I came home from the hospital made a statement that comes to my mind: "he's a very special baby. Only a few days old, however he already seems to have found his balance in life."

I thought this  was a highly esoteric thing to say, on the other hand she must have seen hundreds of babies, and if one was really that stunningly cool, calm and collected, she must know?!

And apart from being hungry all the time and never sleepy, he was in fact a pretty easy going little dude.

When he turned two, I mentally braced myself for "I want candy or I'll kick and scream in the supermarket aisle" meltdowns - they didn't happen.

When he was about three, we attended an English speaking playgroup every Monday morning, and when he didn't behave nicely, I gave him a warning "next time you do x we'll have to leave". I secretly prayed it wouldn't come to that because I really liked to chat with the other Mommies. However he - as he later stated - wanted to go home anyway so he kept disrupting the other kids' play, and I, in order to be consistent, had to follow-up on my threat and remove us from the area. He shrugged his shoulders and stalked off.

These days he's just growing out of the cute clothes age group (think Minion T-Shirts, aaawww, I am sad about this!) and we argue about homework, screen time, veggie intake and the like. I usually tell him we have x amount of time together. We may use it by fighting and being mad at each other and still having to do our chores - or by doing our jobs first and having fun later - up to him to choose. We usually get along fine.

So reading this topic really made me wonder. What might be the reason for him to completely snap? And how will I react?

Maybe if I was being completely unfair, removing a privilege without a warning  and / or a good reason?

Like canceling the Halloween Party because he didn't clean up his room. This might throw him off. He may scream "mean mommy, you s***!"

Let's assume I would not recognise that I brought this on myself, and I might not be able to resist to scream back how sick I was of having to tell him to keep his room tidy and that I was not his maid...


Most likely however - always being in need of peace of harmony - I think I would be able to compose myself, shoot him a nasty look and hiss "we're not doing this here. If you want a ride home, come with me..." and leave without looking back.

So without wanting to jinx it, I will say today that this prompt's scenario is highly unlikely for the two of us - but hey, he's eight, let's talk again in a couple of years!

So, friends, we all know what happens when you say "don't spook it".

It wasn't that Colin had a meltdown in public - but I had one in private...

This is how it went down on Wednesday:

I asked him if they gave him a turnip at school (like in previous years) and if he got any info for the upcoming turnip parade  A note from the teacher maybe? (Wouldn't be the first time that a note didn't show up till after the fact.)
He's in 3rd grade, so his participation in the parade is voluntary, and he pointed out that he was only doing it because I like it so much. Aaaaawww, I do, and I thought it was super sweet of him, as all of his friends declined.

"Nope" he said, "I just need to show up with my turnip, and I need to carve it today. It's my homework."

Thanks for the advance heads-up, school. Good thing this part-time working Mom had bought a turnip at the market. Actually she had bought two, in case we botched one.

I asked what time he needed to show up where.

"I just need to be at the school yard, not sure what time."

If it wasn't for our Daycare's newsletter I would not have known the meeting time was 6:15pm. Our town's website just says "Nov 3rd: turnip parade". Organization, made in Switzerland!!! People are just expected to know. And those who don't are surprised when they want to get home from work and there's a road block and a firefighter is telling you to wait for half an hour.

So we started hollowing and carving. This was gonna be interesting. I am not experienced in doing it. When I was a kid, my Mom helped did it. A couple of years ago the Moms had to come to Daycare or Kindergarten, and we did it together. The next years the 1st and 2nd graders were being helped by the 5th and 6th graders which I thought was super cool.

Colin is not very skilled with knives, and that's partly my fault because I never force him to help out in the kitchen. He chops mushrooms or cucumber occasionally, but a turnip has the consistency of a raw potato and is hard work, and he wanted to quit soon. 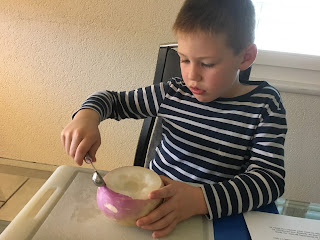 I reminded him that

a) he had committed to participate in the parade so he needed a turnip and
b) in a couple of years (as in two!) he was going to be in 5th grade, hence expected to be an awestruck cute little 1st grader's helper.

He kept going, grumbling, but going.

"Done" he said a minute later and wanted to leave.

"Colin, you're not done, the walls are too thick still, and you won't be able to see the tea light shining through those!"

"Why a tea light, we got a candle stick!"

I had en electric tea light because I know he is not very comfortable walking around with a flame.

"My teacher gave me a candle for the turnip."

"Damn it, I asked you if you got any info from your teacher regarding the turnip parade, and you're telling me NOW that she gave you a candle? Did she also give you instructions on how to work in a candle stick so it fits snuggly, cause I have never done it?"

"Nope - and a candle is an item, not an information."

That's when I snapped. Ranted about teachers who simply expected the parents to pick up the pieces. How was P (a school mate's Mom who grew up in Kenya) supposed to help her son with the turnip? - The boy in question was not going to participate. As weren't a handful of others. And with that he left the kitchen with tears in his eyes.

I called him sloppy, wussy and a quitter, and I felt sorry for myself because I didn't know how to handle this:
I'm sure there is an entire psychological explanation why I didn't do #1-3, and also why I used dessert to apologise to my poor kid, if you have it, feel free to chime in...

Another year I had the honor of watching my cute son attending the village turnip parade, and it was heartwarming!


At the end of the video you can hear him calling "hello Mommy!" This is was what I was talking about when I said I was going to collect.


PS: he said if he was gonna attend next year, then only with a tea light.