Use Your Words - Unbuttoned

December 16, 2016
Today’s post is a writing challenge. This is how it works: participating bloggers picked 4 – 6 words or short phrases for someone else to craft into a post. All words must be used at least once, and all the posts will be unique as each writer has received their own set of words. That’s the challenge, here’s a fun twist; no one who’s participating knows who got their words and in what direction the writer will take them. Until now.

They were submitted by Dinosaur Superhero Mommy - thanks, Karen!

Every year on the first Sunday of December we get a special treat around here. 30 - 50 Harley bikers dress up their ride and themselves for a parade through the city of Zurich. They drive to a shopping mall where they distribute goodie bags and raise funds for the children's hospital. An absolute highlight of the year to me!

Of course the mall's yard is crowded on Sunday shopping day, and the Santas barely have room and opportunity to actually park their bikes - already they're surrounded by selfish, greedy kids who won't wait their turn, can't recite a verse but want a treat bag.

That's why we prefer to go and meet the biker Santa's at their headquarters - the Harley shop across town. They are parked in the back yard, and unsuspecting passers-by have no clue what's going on just a few feet away. 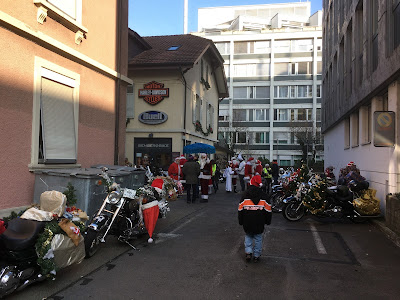 We love it. Not many people know about it so you actually have a chance to look at (and take pictures of) the bikes and to talk to the Santas. 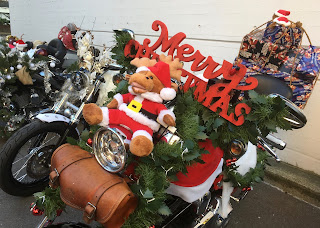 This year the sun was shining, and we decided to take the train and stay until it got dark so we could see the Christmas light. It was a good decision as it turned out later because the city was packed, and the parking lots were full.

We arrived in time for the briefing, and we were stunned by the way it had changed. A few years ago the president would specify the route and point out that bridges may be icy and tell the Santas where to get the treat bags. 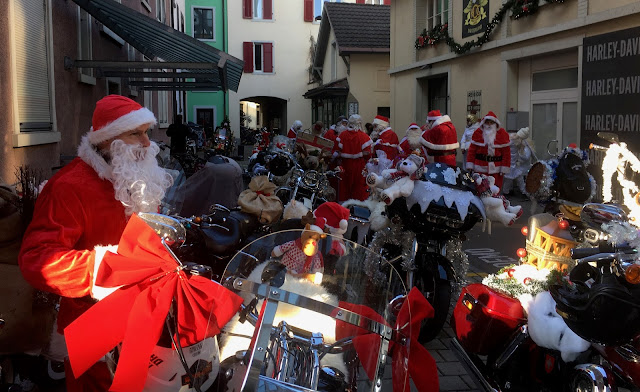 This time he reminded them to observe traffic rules, not so smoke, snort or text while kids were around, not to unbutton their suits and not to intimidate the little children... Wow, was this necessary?

We were still looking for our special Santa friend. The one who always decorates his bike with singing Christmas trees and other fun gadgets. He's always super friendly with kids and takes great pleasure in showing off his bike.

He had to be late. Ever since we have been attending this event, that guy was always here! The previous year he told us his significant other had an accident, and we were hoping it wasn't his turn this year, you never know.

Then I took a closer look at one of the traffic guard's faces. Most Santas wear beards and hats, so all you really ever can see are their eyes.

This guy in his yellow fluorescent vest and blue jeans looked awfully like a regular guy, but it turned out it was in fact him.

"What's wrong, why aren't you dressed up?"

"You know I'd rather not talk about it", he said and walked away.

We moved on, looking at the beautifully decorated bikes. They did such a wonderful job! The briefing didn't specify whiskey consumption was forbidden while on the road, so this guy thought it was a good idea to bring some...!? 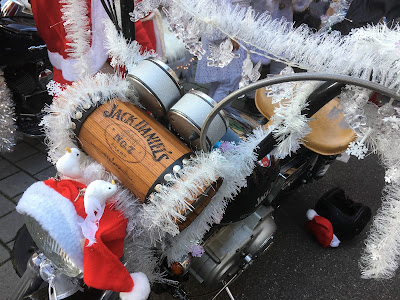 I am not sure if I want my boy to become a biker, but if he does, it needs to be a Harley! 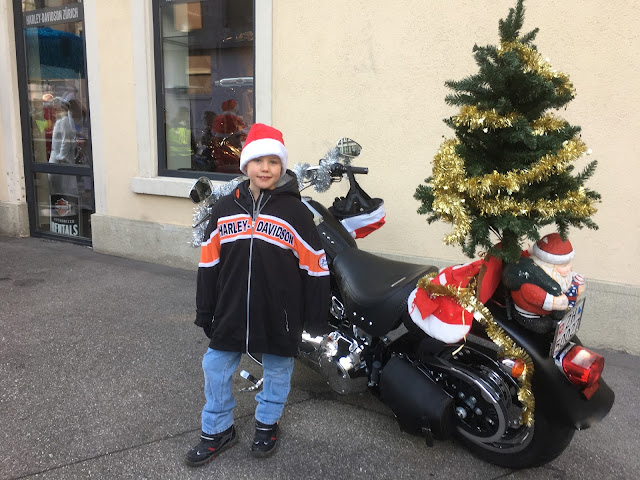 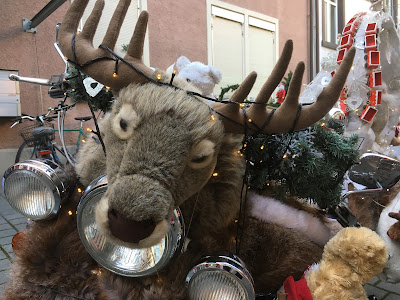 What is going on with this one, why isn't it decorated? 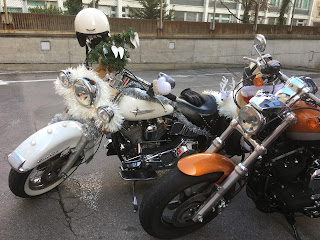 Soon everybody put on their helmets and gloves and got ready for departure. One last picture with the Santa's donkey! 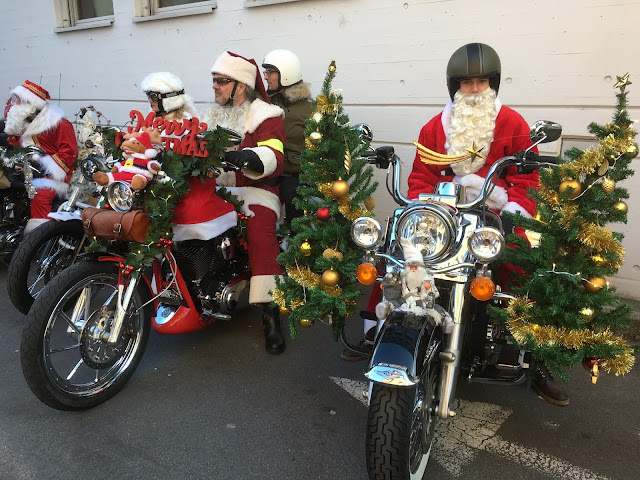 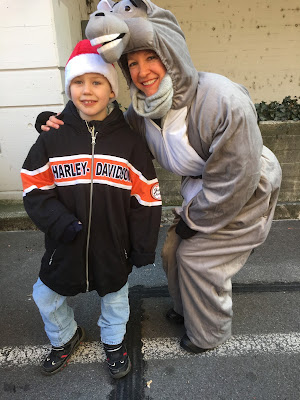 Then they started their engines (I love that sound! Makes me so happy!) and lined up.


As soon as they had left, traffic vest guy approached us.

"You were wondering why I am not participating this year" he began. "I couldn't really talk while everybody was around, because only a few know about my being expelled."

We looked at him, shocked.

"OK, maybe that's a bit of a strong word. It only happens seldom. Let's call it suspended from activities for a year."

We were still very confused. We are not familiar with the rules of a motorbike group.

To us he was one of the most loyal and passionate Santas?

"This is what happened: we were supposed to line the streets at our fellow biker's wedding this spring. We always decorate our bikes with hearts, dice or lady bugs - for luck, you know.

I was on my way to the mountain location where the festivities were going to take place, and I was low on gas so I stopped at a gas station. I went into the convenience store and left my bike unattended for like two minutes. Did I mention mine was covered with four-leaf clovers, and I had a rainbow and a pot of gold installed? Anyway. I paid for my gas, and when I returned my bike was gone!"

"Well, at first I asked the other customers who were at the pumps, they must have seen something?"

"Several patrons at the gas station claimed to have seen a bunch of leprechauns approaching the motorcycle, walking around it, cheering at the sight of the pot of gold, and while chatting excitedly, they were helping each other to climb on the bike and take a seat.

How they actually managed to start the engine is unclear to everyone who was watching. Nevertheless they did in fact drive off, giggling and cheering.

I felt I didn’t have the time to call the police and wait for them so I could file a report, after all I was expected to meet with my Harley brothers in less than an hour! Who was gonna believe me anyway?

It took some convincing, but eventually one oft he motorists agreed to take me to the chapel on the hill.

As we were on our way we were hit by a tractor and had to exchange insurance information. The farmer was deaf, and it was hard to communicate.

Of course when I finally arrived everybody was already there, and they gave me a strange look, annoyed, even.

Police are here – what were you thinking to hire some crooks to entice the bride away?

I had no idea what they were talking about.

As it turned out, not only did the leprechauns steal my bike, they also used it to kidnap my buddy’s fiancée shortly before she was supposed to walk down the aisle.

The little pillow where the wedding bands were sewed on, had disappeared. Some of the  guests claimed that somebody had stolen their jewelery. Golden bracelets, necklaces, the works.

Search troops with rescue dogs were combing through the forest looking for the missing bride for hours. It was already dark when they finally found her, partying with the leprechauns. She was drunk and obviously not in her right mind. Apparently she had kept asking for me, her true love. I honestly don't know why she would say that. I only met her once or twice when we were out riding with the guys.

The leprechauns had taken her to a cave where they stashed all their stolen goods: gold coins, watches, jewelery, my bike - anything shiny. Judging by the volume of prey this wasn't the first time they've pulled such a stunt.

Up to this day the case hasn't been entirely solved. Needless to say they didn't get married, and everybody has been blaming me, even though I didn't do anything wrong.

Now you know. I was hoping they would let me be part of the Santa ride. Well, next year! Hope to see you guys back!"

On the Border
Climaxed


PS: the only reason traffic guard guy wasn't a Santa this year was that he and his wife just came back from vacation and didn't have time to decorate their bike.