After covering a difficult subject of friends breaking up last week, let's do something lighter today: 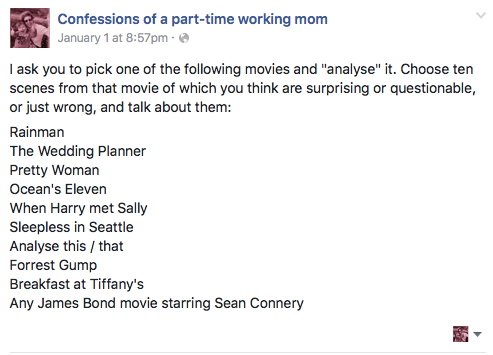 Little did I know that I was going to get a movie prompt for this month's secret subject swap: What book have your read that you know would make an awesome movie? As it turned out pretty much every book that I like has already been used to shoot a film!!

Here's the movie I picked for today's post - it may or may not come as a surprise:

It's probably my all time favourite. My then boyfriend and I went to watch it as soon as it came out in Switzerland. I remember we were sitting at our favourite pasta bar asking the waiter for a movie theater program. "We'd like to watch when Harry met Sally but we're not sure if it is playing yet" we told him. For some reason he was super confused. "Who is Harry?" he asked. "I'm not sure I can help you if you want to meet a friend at the movies..."

In the meantime I have been watching it so many times on DVD, I could probably write down a summary about a hundred pages worth ;-)

So here are ten things that make me wonder...


Your turn now: what are things that surprise you in your favourite movie?

What's up next Thursday, February 16? I can't help it but I feel we need to talk about Valentine's Day: why do you love (or hate or simply ignore) it, what are your top ten thoughts on Valentine's Day?

The week after, February 23rd, we are going to post our top ten things that help us to get motivated to work out, to clean up, to do whatever it takes in order to achieve our goals.