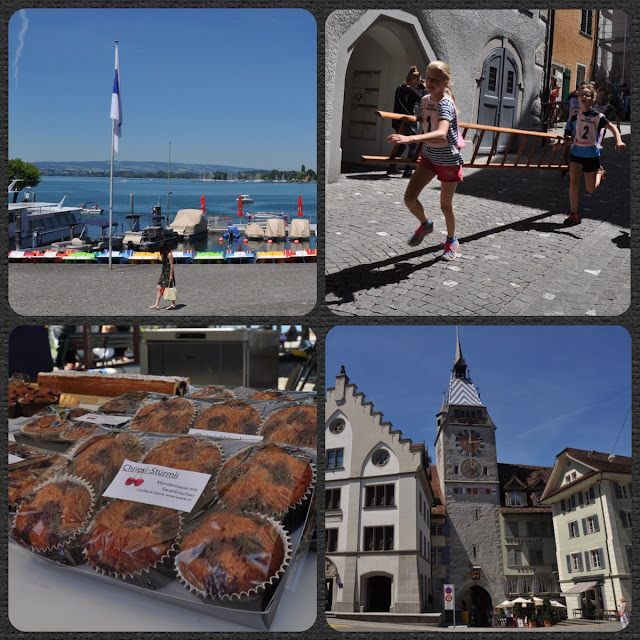 Sometimes you've got to take care of yourself, otherwise nobody else will.

This is what I told myself after regretting that I couldn't witness this fun tradition "Chriesisturm" aka Cherry Storm.

I canceled Zumba, asked my Mom to make lunch for Colin and arranged for him to meet his Dad at the office after school.

There: my day off. After some trouble shooting regarding my phone plan (on the blog July 13), I was on my way to Zug! Did I mention it was another most gorgeous blue skies' day?

As I expected the old town to be crowded and parking lots full, I parked at my usual shopping center and walked across town. This is what I discovered on my way... I think it was calling my name, even though it was only noon, but I was in a hurry, so I can't say for sure: 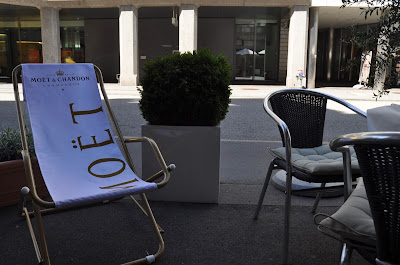 With only 5 minutes to spare I settled down in the shadow, phone and camera charged and ready.

Twelve noon. The bells started ringing, just as the old tradition demanded. It stopped after a short while, though. Then the officials signed each other. "It's time, they're coming!"

And here they were, boy were they fast:

Go, guys! Those ladders must be heavy, but the men did a nice job running while holding on to them. 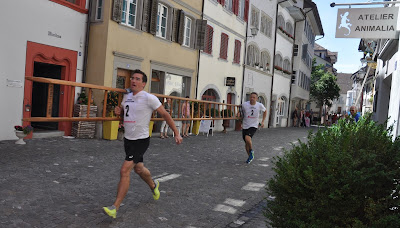 Two adult categories, then a break. 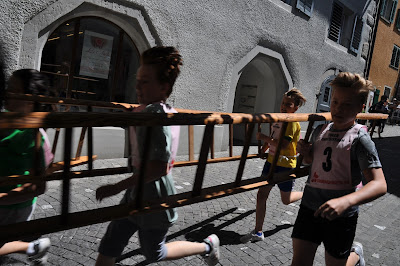 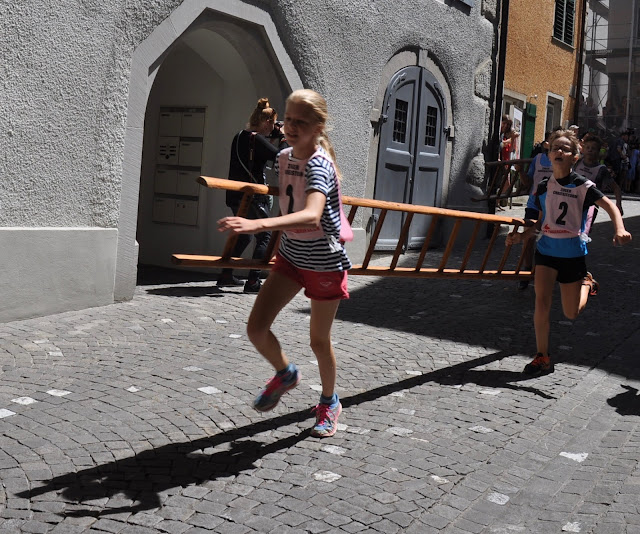 Two or three kids' categories. That was it.

This is the thing about expectations: you imagine it'd be a certain way - and it may not turn out that way.

12:15pm, and people were headed to the Landsgemeindeplatz for lunch. 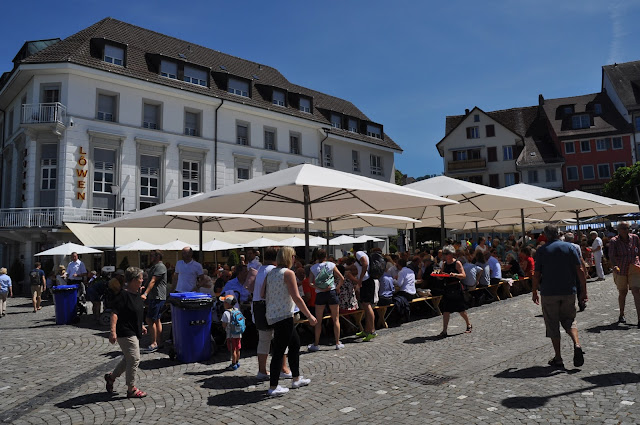 What's "Landsgemeinde"? Back in the (not so) olden days, direct democracy was being executed at this very spot. Issues were being discussed and voted on in person. Those who agree, raise their hand! Those who object, raise their hand. Any abstention?

Up until 1971 in some Swiss cantons (states) this right to vote only applied to men. No kidding. A handful of die-hard conservative cantons kept thinking those matters exclusively belong in male hands.

Anyway. This piazza is named after the meeting spot for public voting. Today it was the venue for a cherry themed folk festival.

At the Cherry Market you could purchase all kinds of specialties. 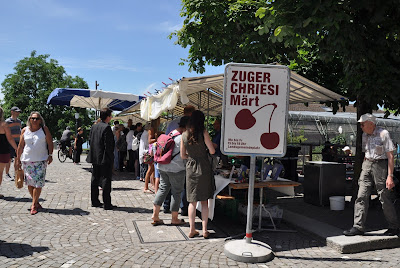 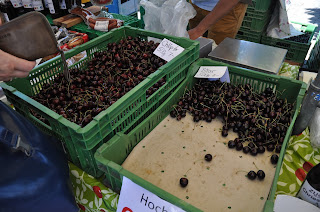 Kirsch liquor, very famous. It's being used to make Zuger Kirschtorte. A cake made from a light Japonais and biscuit batter, soaked with Kirsch. I don't like it - I prefer cake and alcohol to come on a plate and in a glass. Separately. But maybe that's just me. 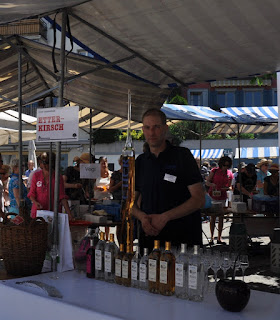 Cherry Storms - this is what I had been looking for! As it turned out they are made of almond paste and sour cherries. I was a bit disappointed. I'm not a fan of either. Yeah, well. 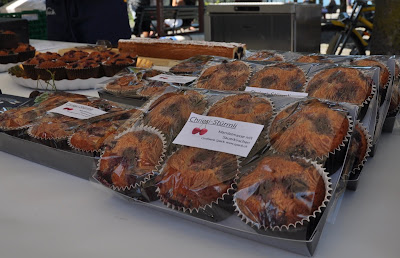 A Swiss country band was playing, people were having a good time. 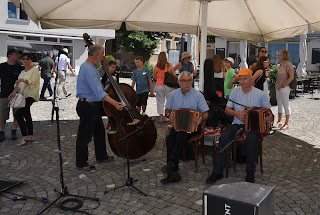 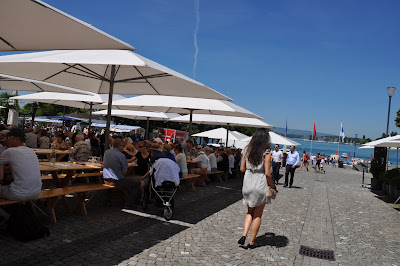 As for me I used my time to walk around and take some pictures of this lovely town. I used to live here in the late 1990s / early 2000s. These days we're back three times a week for Colin's hockey practice. Interesting how life happens, right? 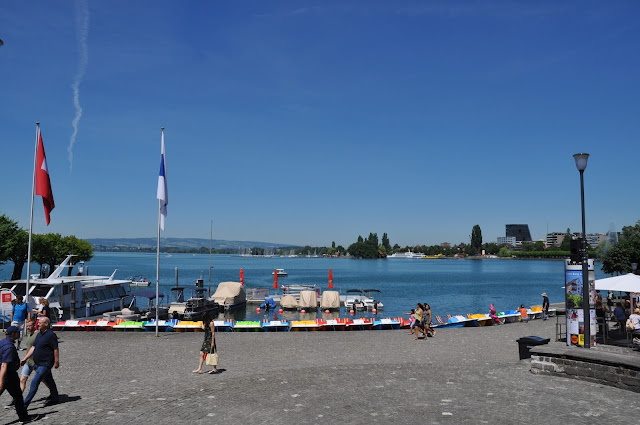 This golden guy on the fountain is called Kolin. It was his family name, though, he was a mayor in the 1400s. Who knew I was going to have a son called Colin when I first walked past that figure? 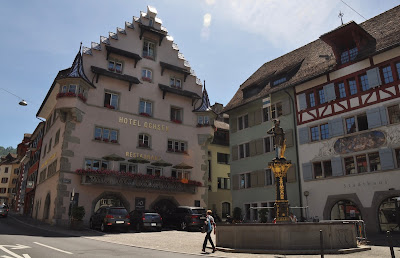 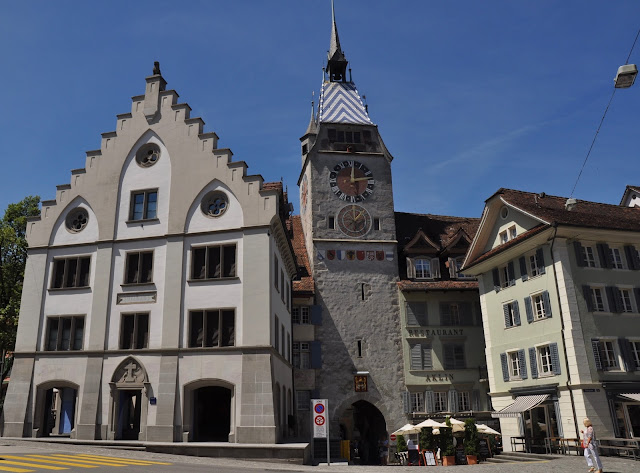 My favourite dinner place. Well, one of them. 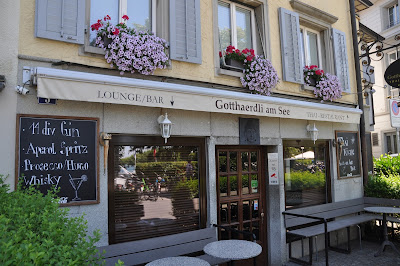 This sign says "I don't drink coffee to wake up. I wake up to drink coffee!" And with this to keep in mind I'll let you go about your day. I did some binge publishing today because I like my posts to be in chronological order. If you have some time check them out!