After 2014 I'm giving #100HAPPYDAYS another go - not because I failed (just the opposite, actually) but because it's a great way to make all those little things visible that add up to happiness, otherwise we'd just speed through our busy days without paying attention.


I'll summarize ten days at a time and compile them into one post.

So on Day 1 Colin needed a new bicycle. Mainly because he had clearly outgrown his little boy's bike, but more imminently because he got a short-notice invitation to participate in a bike treasure hunt. I knew that with my car I wouldn't have a chance to actually transport the new bike, so we had to force ask hubby to join us after work. As it turned out, even in his station wagon he needed to fold down both back seats which left nowhere for Colin to sit, so we hung out in the empty mall's parking lot (after hours), there was still daylight and warmth, and we played "I spy". 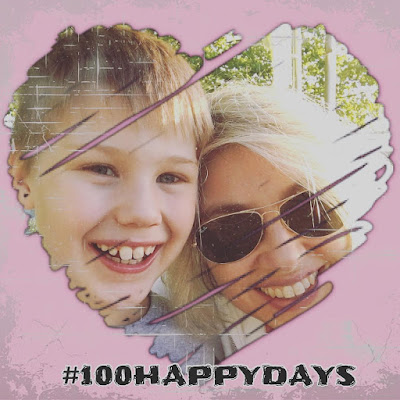 Day 2: July 4 isn't a holiday, much less a day off in Switzerland, and after work I had to take C to his summer training.

While he was at practice, I decided to go out for Thai Dinner by myself. Why Thai? There is a Thai restaurant I like, and it's not that there are any acceptable American eateries around, I mean, let's get real, I am not going to MCD's just because it's Independence Day!!

Colin loved that his blueberries got enhanced by mini marshmallows and red M&Ms, and that Grandma went the extra mile to inflate his new soccer ball - both added to his smile. 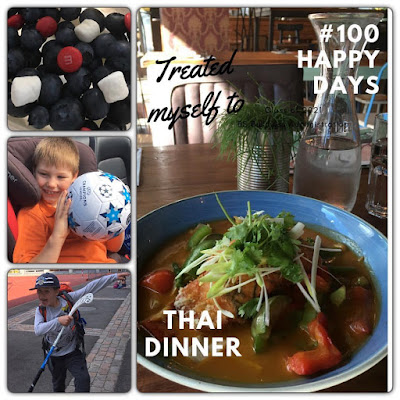 After the bike tour I mentioned earlier which took place on Day 3, I picked him up with my own bicycle, and we cycled to BK which is less than two miles away. In case you're wondering I had a salad. I figured it was a shame to ruin the exercise by wolfing down a steakhouse burger. 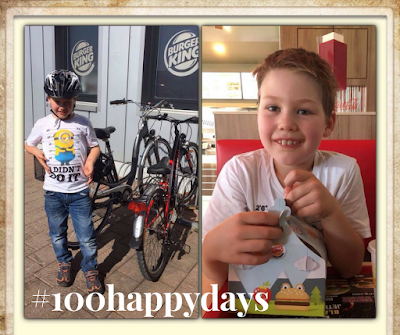 Thursday is publishing day for Top Ten Thursday and my day off, and with my personal trainer being on vacation there isn't anywhere  I need to be. So on Day 4, in sweltering heat, I made my way into Zurich to meet with my lovely blogger friend Manuela who runs a terrific blog about life balance, parenting, career and travel, check it out: own the way you live 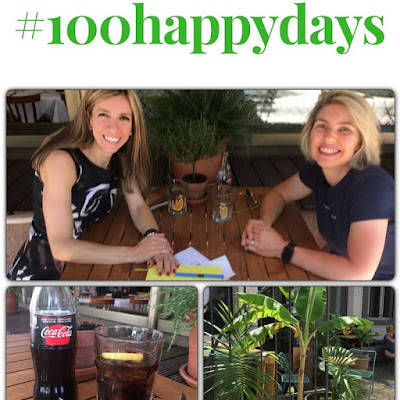 Back to practice on Day 5, actually the last one before a short summer break.

Parents are supposed to drop their kids off, pick them back up, do laundry and make snacks, but they're not, under any circumstances, supposed to watch, comment, get into discussions with the coaching staff, you get the picture.

Well, I had to pee so I took the liberty to sneak into the gym building. I had no idea they were there, in plain view. I swear, I just wanted to make my way to the ladies' room when my boy spotted me, waved at me and mouthed "Hi, Mommy!" Totally made my day. 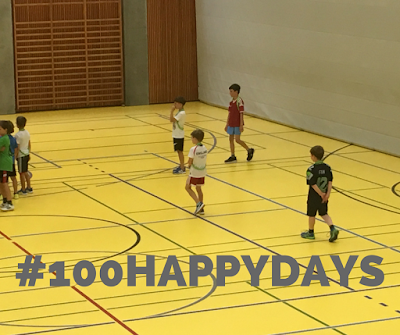 Day 6 we celebrated youth festival at our village. You'll be able to read all about it tomorrow in my Use Your Words post. Unfortunately in the afternoon a torrential thunder-/hailstorm surprised us and cut the fun short. It was also the day my brother and his middle child arrived for a visit.
Very happy to hear that my friends in British Columbia managed to escape the raging wildfires and settled into at a friends' house. 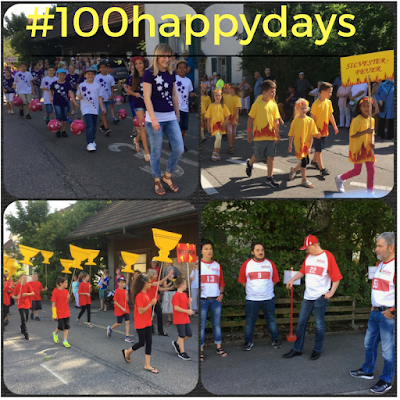 Finally, Day 7 was here! Colin had been anticipating the children's field hockey tournament for a while. At 5:45am he was already dressed in his custom-made team jersey that he had designed.

There were only two teams consisting of players that young, all the other ones were considerably older, stronger and more experienced, which of course made it hard for the Power Foxes. I loved the way our coach - one of the team member's Dad - approached the group, but there is only so much you can do. One field player decided he wanted to be the goalie for the next games. Everybody was OK with it - until they lost, that is.

There was a bit of drama going on, disappointment, blaming, tears, hissy fits, and I'm talking about the boys here!!!

They ended up last in their category, but after a while C got over it and used some money he had removed from his piggy bank to buy his entire team a "Snow Jet" ride. 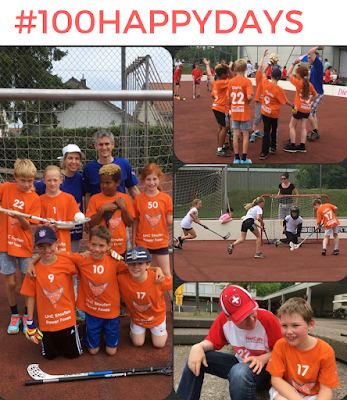 The last school week began on Day 8, and Colin's friends needed a place to have lunch and come home to after school. I let them study the Dunkin' Donuts menu and took the younger one to the mall to purchase the treats while the other two were in class.

Not so fun fact: I had stuck the donut list to my clipboard where I keep the packing list for both of Colin's camps, his practice and tournament schedules, you name it. When we wanted to get in the car to go home, I noticed I must have left my clipboard somewhere.

We went back to 3/5 possible places, thank God is was still there!

The donut tasting was priceless: they split each donut into thirds, tasted their piece, gave it a thumbs up and a rating on a scale of 1 - 10. Most were being ranked 9, 9.5 or a perfect 10! 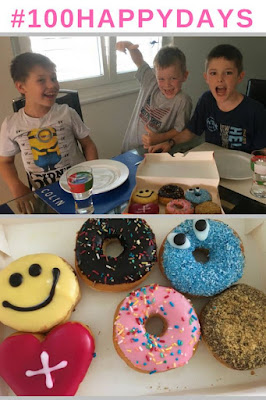 Time is flying! On Day 9 my brother and nephew asked for a BBQ in the forest. It was drizzling, but they were determined, and the fire was, too. They were craving the typical Swiss grill sausages like Bratwurst and Cervelat. After dinner the sun came out again, and the guys were playing soccer. 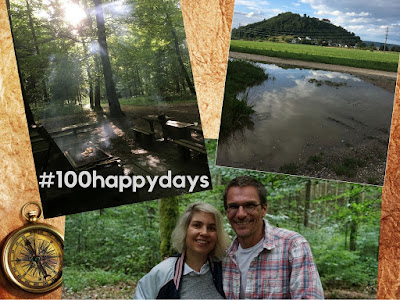 Day 10 was a busy day, office, make lunch for C, groceries shopping, laundry, take C's books to the library, make dinner,... Not a bad day. Just "on duty", and at some point I was like "what am I even gonna post tonight?"

One of the great thing about this #100HAPPYDAYS challenge is that usually something pops up. That day it was Freddy. Who is Freddy? It's Colin's turtle he made in Arts & Crafts class which he's not fond of.

The previous day he got his report card. Straight As in Math, English and Science, great job! C in Arts & Crafts, it probably won't ruin his career perspectives. Anyway, I thought Freddy was super cute, and I was proud of my son - making this turtle was probably harder for him than solving any math problem. 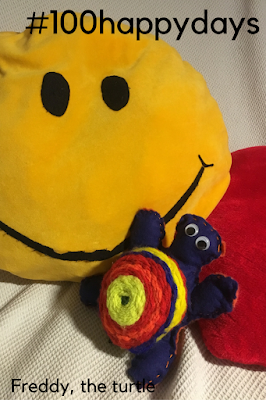 There you have it, Days 1 - 10 of this year's #100HAPPYDAYS challenge. How were your past then days, let me know down below and be sure to check back soon!