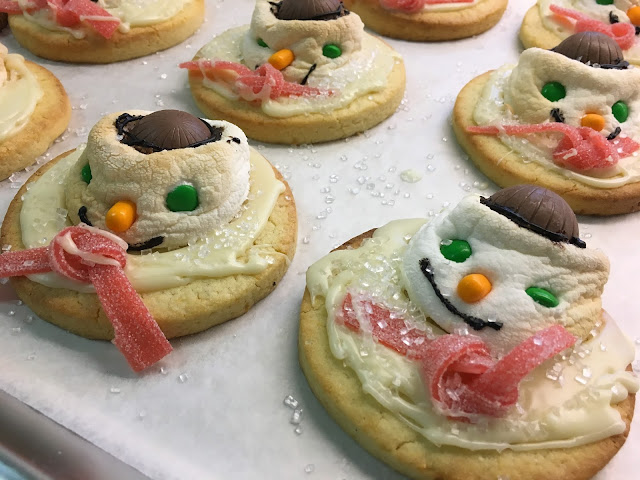 It's beginning to look a lot like Christmas, and I've been running around like a crazy person, but let me sit down for half an hour and tell you about a couple of highlights these past days.

We celebrated with Colin's Godfather. Even though they don't live too far away, they often have snow when we don't. So pretty! 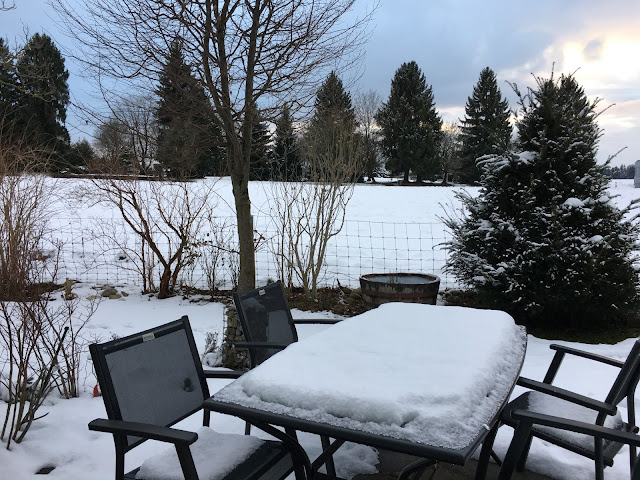 Snow also in hockey town. One of the last practices this year. This was on Monday: 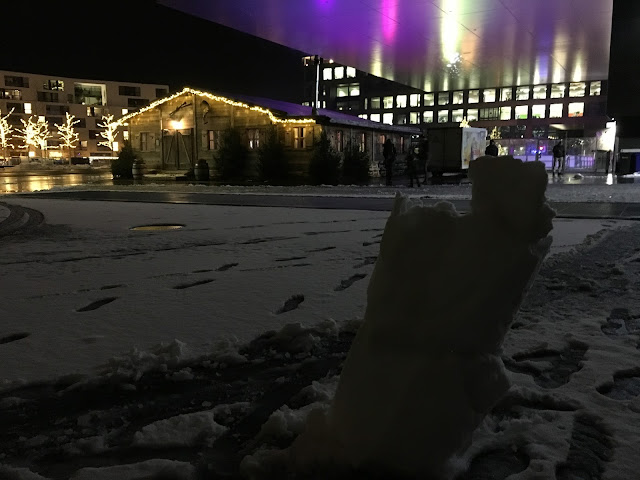 This was on Tuesday. The snow was gone. Yes, this week it was Mon, Tue and Wed on the schedule. Talk about being busy. I was having a good time, strolling through the city, getting stuff done and still - or so I thought - having time for coffee and online fun... ...when suddenly an alarm popped up:

Usually once a week after their usual ice routine they do some running, stretching and whatnot, and they obviously need their gym gear. Just I wasn't aware of it this Tuesday. Totally neglected to check the schedule or my calendar for that matter. Shooooot! Not having their gear is no excuse, they need to participate either way. I have seen boys jogging in their jeans and winter boots. Not my boy, though. Not today!

With a considerable amount of adrenaline pumping through my veins I was racing to the parking garage, paying my fee and starting the engine. Luckily Colin had gym class at school earlier that day, and his gym bag was on the back seat. Never mind the stuff was probably smelly, at least he was going to have his sneakers! If only I made it in time! Why are those traffic lights always red when I needed to get somewhere quickly?

Parked in front of the arena, yes, in the absolutely no parking zone! Put my hazard lights on and ran to the locker rooms. Boys in their sweat suits were already on their way outside. Not my boy, though. For once I was glad he is a slow (un) dresser.

Gave the bag to one of the care takers (parents are not supposed to be in the locker rooms. We're not even supposed to sneak through the hallways.) I figured my purpose was acceptable to make an exception, even though I have heard the coaches frown upon the kids saying "my Mom forgot to pack X or Y." They are expected to be on top of their stuff.

Ain't nobody got the patience for this at our house!!!

With a little over half an hour to kill I couldn't go back to the city. I parked my car in a regular spot and decided to treat myself to a drink. As I was going to drive I only made it a virgin caipirinha at the Sky Lounge. God knows I wouldn't have minded a regular one! 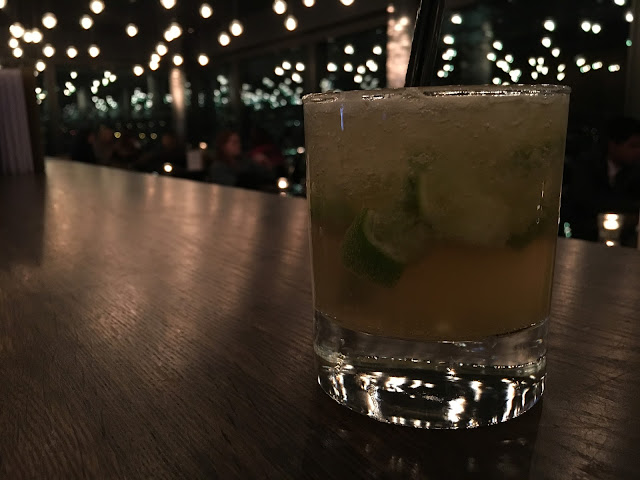 Interestingly I slept through the night and was up bright an early. I took the opportunity to make a cookie dough so it could chill while I was at work. Colin was going to take cookies to school the day after. Of course I couldn't just make some quick and easy ones...

I had something special in mind, and I was determined! After all I had shopped for all the decoration items:

Can you guess what all this was for? 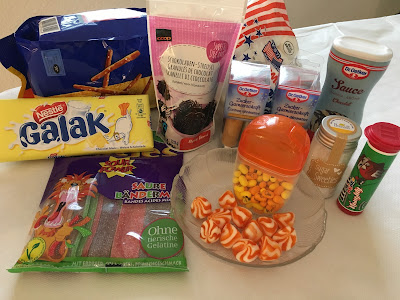 Melting snowman cookies! They were coming along nicely, too! 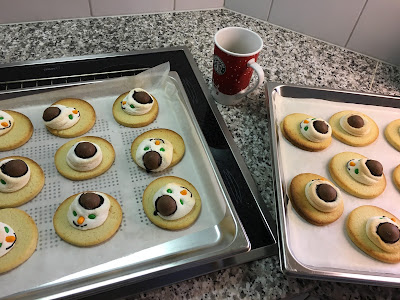 I was especially pleased about the fact that my idea worked out: I baked the bare cookies until almost done, removed them from the oven, put a marshmallow on each cookie, baked them for another two minutes and then started decorating. The marshmallows were nice and gooey and perfect to push the Tic Tac nose and the mini M&M eyes in! 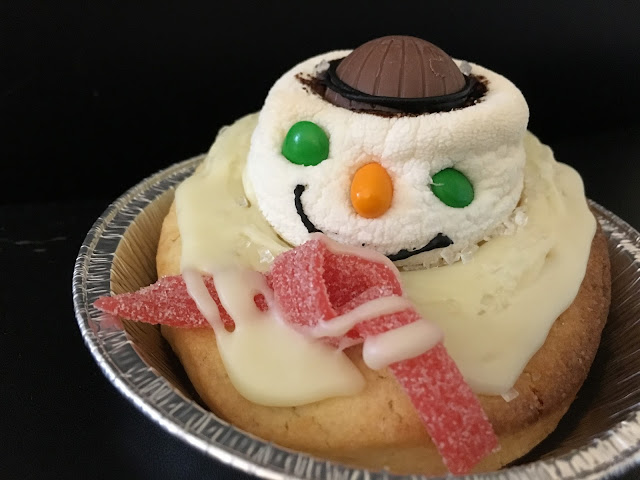 My little helper wrapped them individually 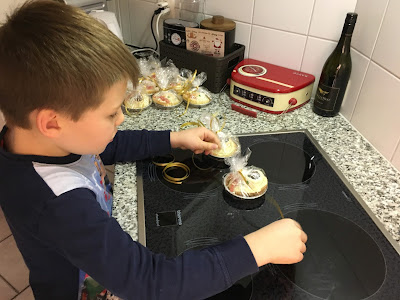 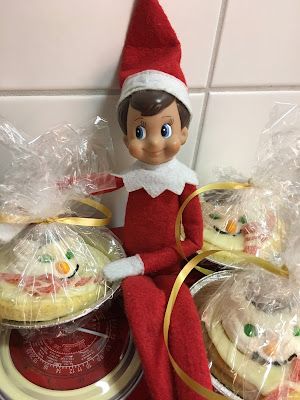 Then we were off - last practice in 2017, and he got his new hockey stick from the MVP store, how's that for merry Christmas? 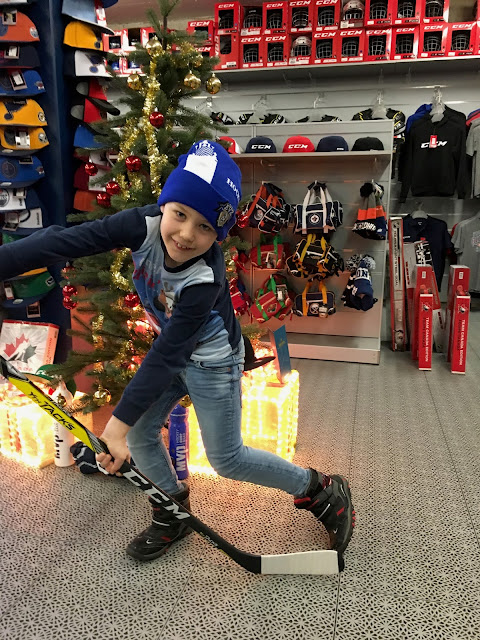 So we had sweets, beverages and gifts, I'll say this was a proper blog-versary celebration!

Thank you for bearing with me, here's to a wonderful holiday season!