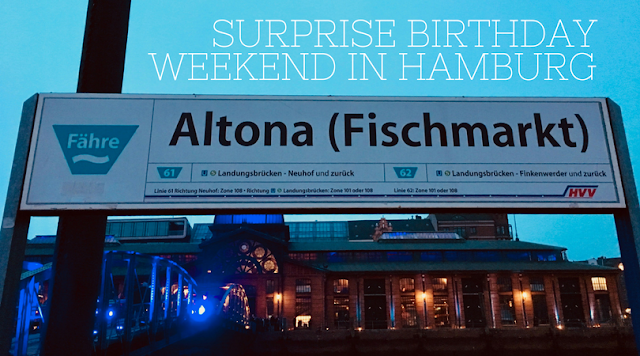 What to give to a guy who has everything (but time)?

Hubby is turning 50 this month, and for his 40th we had spent a weekend in Hamburg, Germany. We had only just found out I was pregnant, and after visiting Miniaturwunderland - and being delighted about the experience - we vowed to take our baby there once he or she would be old enough.

I had blocked the Friday in hubby's office calendar, and he knew he was going to have a day off, and that's all he was going to know until the very morning of our departure.

I asked him to charge his gadgets the night before, and I packed everything else - which, if you know how much I hate packing is already a pretty great birthday gift!

We left the house and walked towards the bus stop, rode to the train station, boarded the train to Zurich by which time it became obvious we were headed to the airport.

I planned on dropping the bag without having hubby nearby but the guy at check-in literally yelled as soon as he saw us approaching "Cologne or Hamburg, folks?"

OK, he was bound to find out at some point!

This is us, figuring out public transportation day passes at Hamburg Airport: 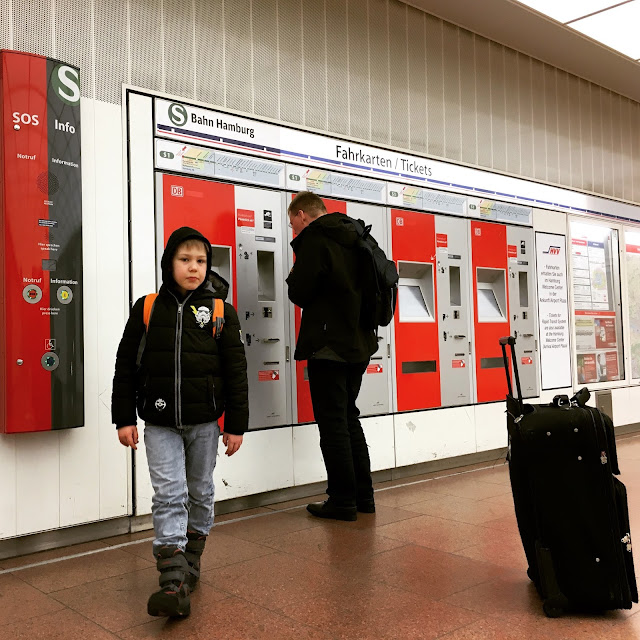 We had arrived with a considerable delay, rode to the hotel, dropped the bag and made our way to Landungsbrücken at St. Pauli's Piers the largest landing place in the Port of Hamburg, where we spent the shortest 40 minutes' waiting time for a dinner table (25 minutes at the bar, not enough time to empty my glass of wine - but this was more due to the fact that my stomach was empty and I didn't want to push things). 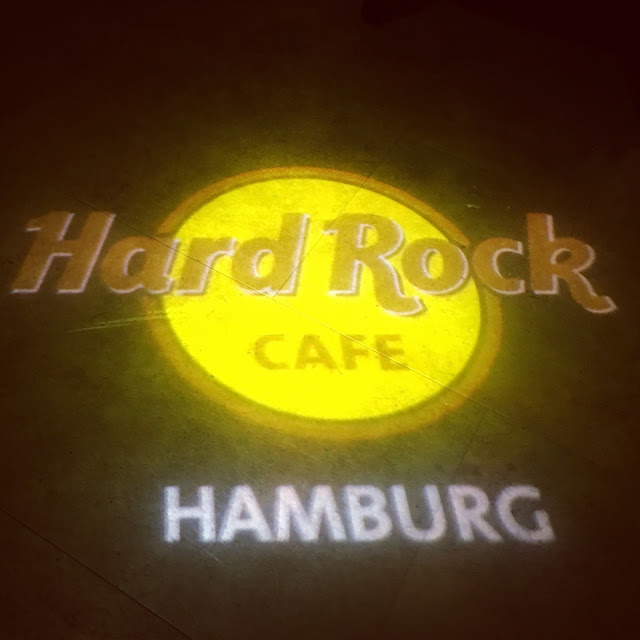 Our server seemed to speak better English than German (can't blame him. Given the choice I'd rather speak English than high German myself) but he kept speaking German, so that's how we ordered.

The waiter was like "Obst today is young beans, if I were you I'd rather go for the fries." Colin liked the suggestion.

When our dinner plates arrived, hubby had a steak with green beans and mashed potatoes, and I was pretty sure our waiter had mixed up fruit and veggies. When he stopped to ask how everything tasted, I asked what the vegetables were.

Sure enough he said "oranges" ;-))) Which he immediately got for Colin once we were done laughing.

As for me I had some Oreo Cheesecake on an orange plate for dessert. Healthy enough, right? 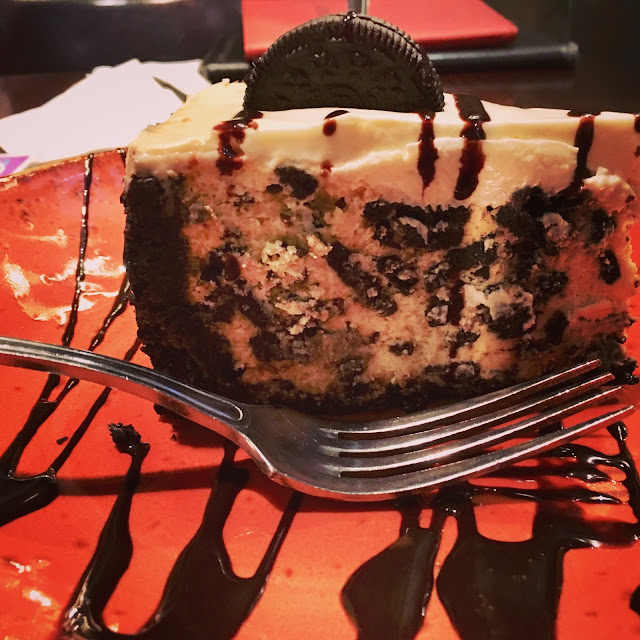 The next morning we had to get up fairly early because online tickets for Miniaturwunderland are only available for early entry times. If you miss it, waiting times can be as long as 90 - 120 minutes which we experienced first-hand when we went there unprepared ten years ago. And I guess it wasn't even that popular back then!

Because we were on the road so early we couldn't even buy day passes because tourist day passes allow you to ride public transportation between 9am and 6am of the next day, and we never figured out how to purchase 24 hours' tickets.

The streets were practically empty, and even though Hamburg is a pretty big city being home to 1.8 million citizens, you may walk almost everywhere. From the hotel to the Miniaturwunderland it was a good half hour, a bit more because we had to stop and take pictures of course. Gorgeous! 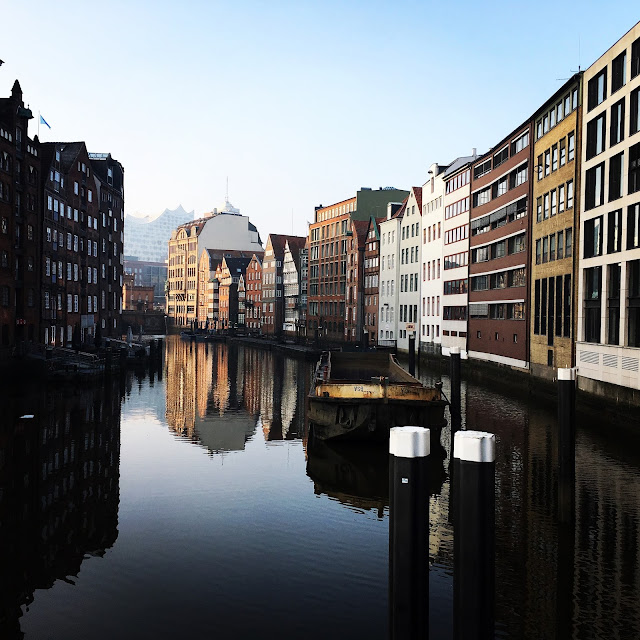 What is this Miniaturwunderland she keeps talking about, you may wonder.

It is an enormous model railroad exhibition, sort of. It is a magic place. They recreate landscapes, cities and infrastructure in admirable detail. And even if you could care less about model trains, you'll still be absolutely amazed! Every couple of minutes the lights go out slowly, and it becomes night. If you happen to be "in Las Vegas" at that time, you're in for a treat! 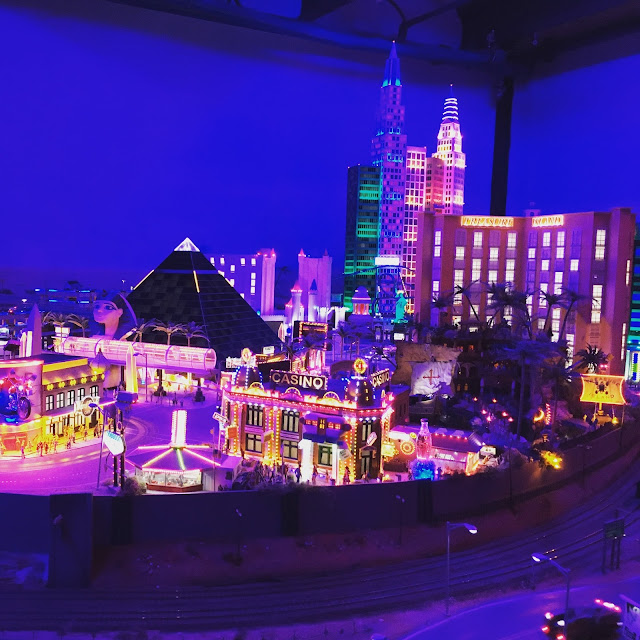 Or in Miami Beach for that matter! Every exhibition offers a variety of interaction buttons you may press. Like to launch a spaceship from Cape Canaveral! 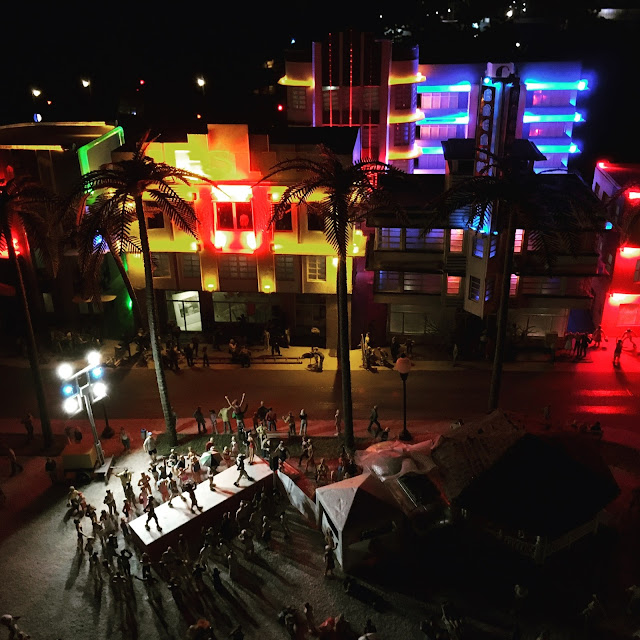 Eventually you've got to move on. To the Scandinavian Winder Wonderland, for example. 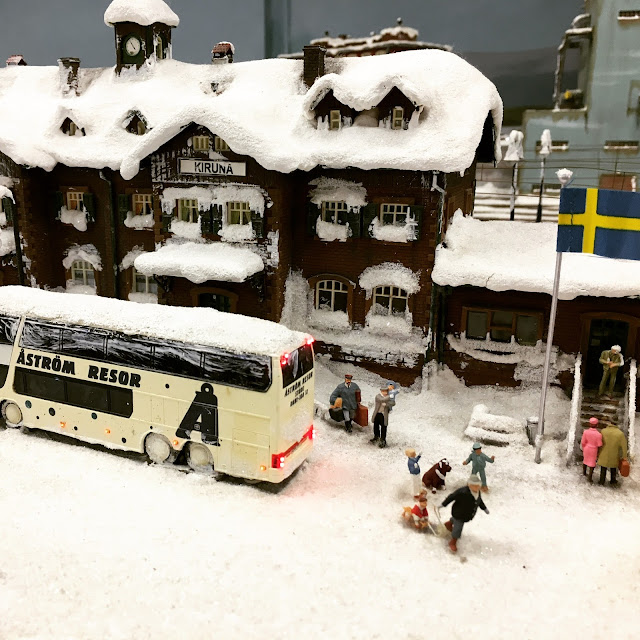 When we were there in 2008, they were working on the Airport Exhibition. They did such a wonderful job! Everything is so authentic, just little! Service vehicles, tarmacs, aircraft, control tower, docks, it's all there!

And they really land and depart! 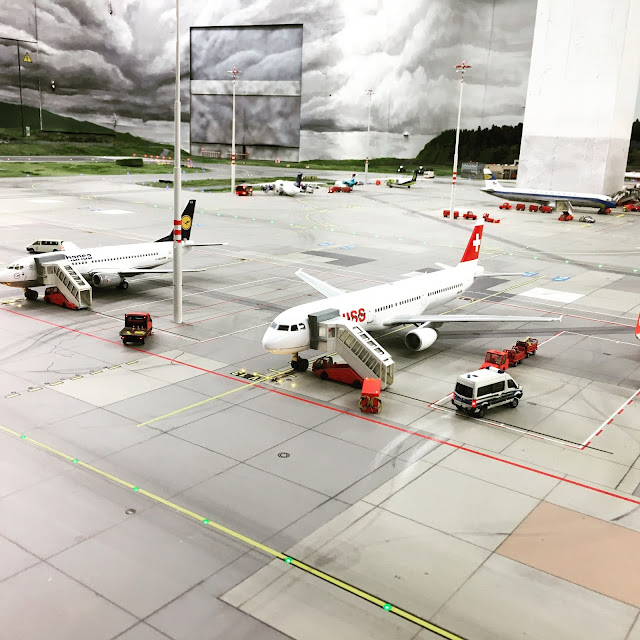 We spent four hours in there! Four hours with no food or beverages as they aren't allowed on the floor, God forbid you dropped or spilled something on the railroad tracks!

The rooms were beginning to fill up, and even though people were behaving pretty decently, there were children crying, and there was some shoving and pushing in order to take pictures.

I was so glad to be out and to breathe some fresh - yet chilly - air. I told the hubby it was a bad idea to be born in February. (Said the girl whose birthday is March 2nd, practically still in February, haha.)

Exploring the city we kept walking by those love locks, typically on bridges. Love the tradition, the only place I this is done in Switzerland is in Basel on the Mittleren Brücke. 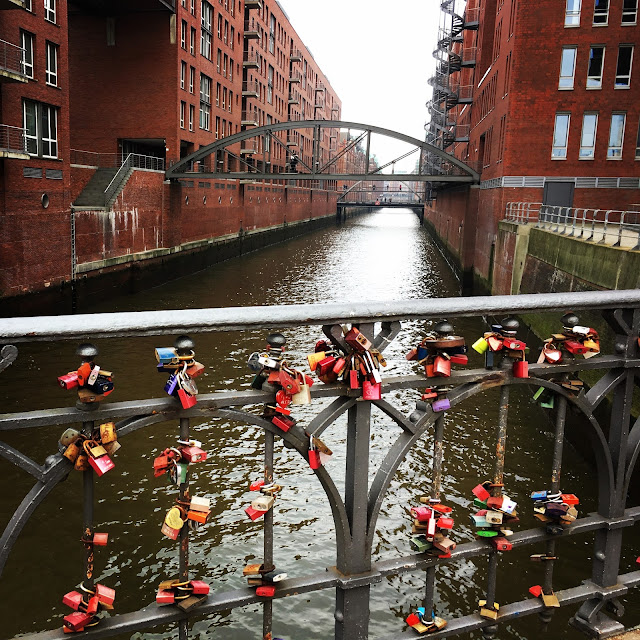 Our destination was the new Opera House, called Elbphilharmony. We had seen the model at you-know-where, and it felt strange to stand in front the life-sized building, all 110m (360 feet) tallness of it! 26 storeys are not only used for concerts, but there are hotel rooms, parking and apartments, and God only knows who can afford to live there! 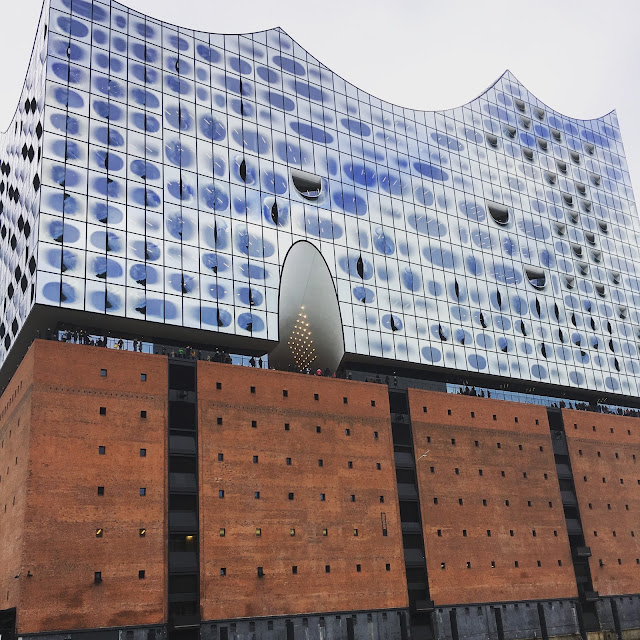 I focussed on the free fun around the boardwalk. A guy was blowing gigantic bubbles the kids were chasing. Loved it! 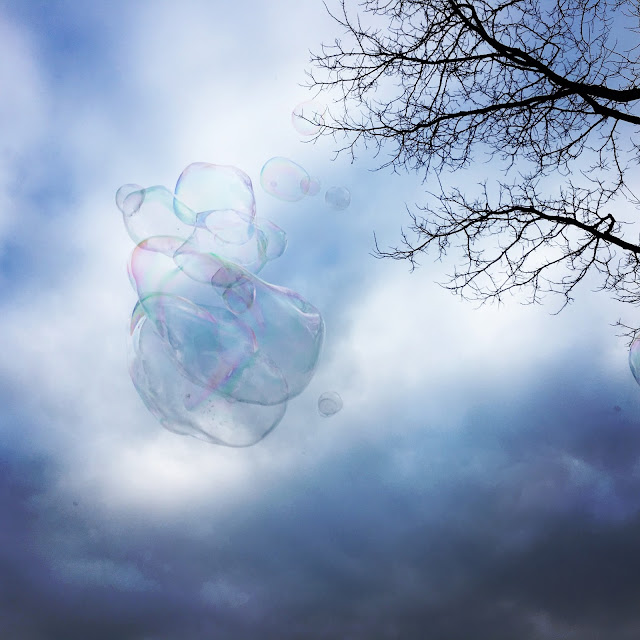 I had made dinner reservations at a posh steak house called Mash, and in order to get there we took the subway and the ferry, how cool a journey is that? 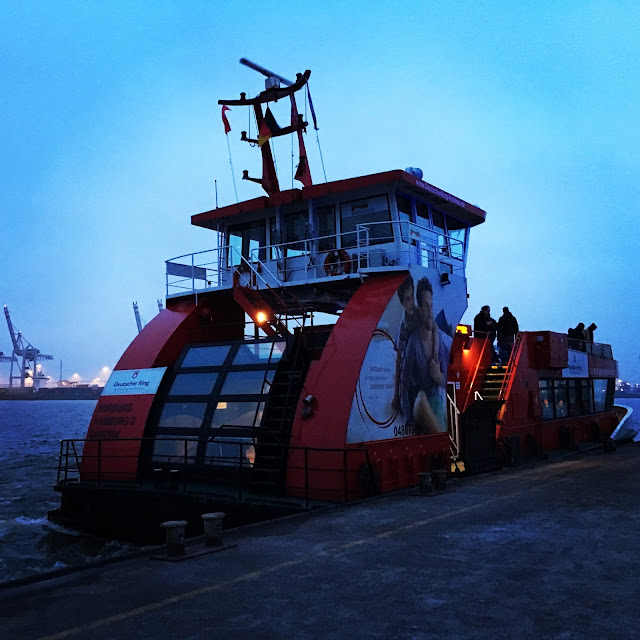 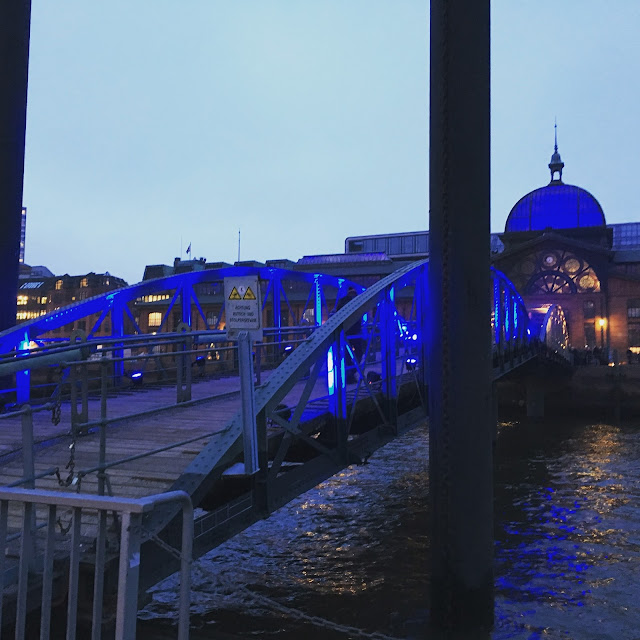 The restaurant had come highly recommended, and while it was nice, I probably wouldn't go back. I thought the value for money wasn't too great. I did love the wine, though. Australian Cliff Edge Shyraz. Need I say more? 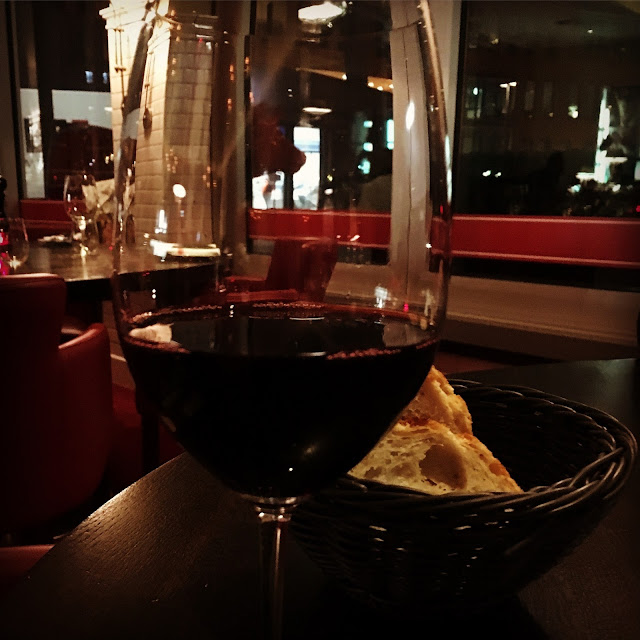 We did have a bit of an unfortunate Sunday that included a chipped tooth, snow flurries and slush, an incident at the bus stop, actually, make that two, a black light fun park that didn't accept credit cards and some rather rude German people, but I'll spare you.

We did spend a very nice weekend, and we'll preserve the wonderful memories.

Have you been to Hamburg? Are you planning to? Let me know.
Birthday Cliff Edge Elbphilharmony Hamburg Hard Rock Café Love Locks Miniaturwunderland Surprise Trip Weekend