November 26, 2018
Shortly before fall break C brought a note from the teacher. It was talking about career day 2018. Whaaaaaat? When did that happen for fifth graders? I thought the youngest kids doing "Zukunftstag" were sixth graders.

It's just as well.

"So, C, you're always welcome to hang out at the office with me, but what do you really wanna do?"

"That's great, and you have a pretty good idea what that is all about. For career day's sake let's focus on Plan B then."

Excellent. He's actually been commenting his game since he was very little. Interestingly he was not only speaking high German when he was "being" a Swiss national league player and switch to English when he was being an NHL player, but he was also copying the respective reporter's voice and style ;-)

He wrote a letter to Steffi Buchli. She is a Swiss idol, probably the first girl who works for a sports channel covering ice hockey. She's petite, but her smile and enthusiasm are huge, and now imagine her alongside hockey players in full gear!

She emailed him back saying that unfortunately on that specific date she wasn't gonna be at the studio but she'd be happy to forward his request to the official channels.

That's how he got invited to the official corporate program designed for kids of parents who are actually UPC employees. UPC is Switzerland's largest cable operator. They also own MySports, the TV network that covers hockey where Steffi is one of the managers.

Thursday morning, 7am. We're on our way to the bus stop. 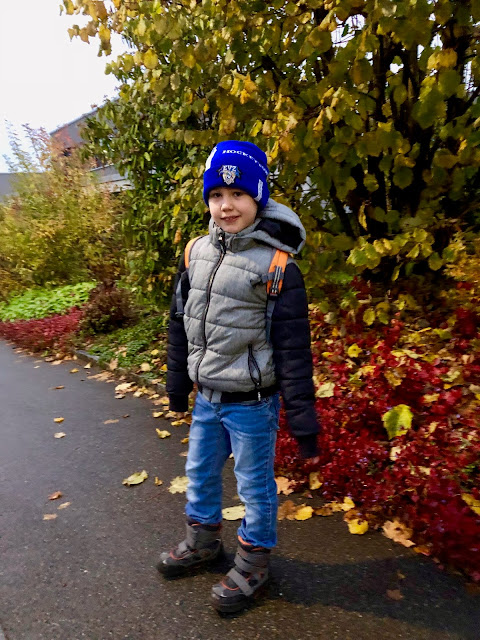 There's a dozen business people, Colin, me - oh, and a classmate's Dad with his Goddaughter. He works for PSI, Paul Scherrer institute, a natural science and technology research center. My Granddad worked for them back in the 70s and 80s. I had the opportunity to do a guided tour many years back. My head exploded that day. All that talk about solid-state physics, materials sciences, elementary particle physics and nuclear energy research.

We hopped off the bus at the train station and wished the girl well.

What was that loudspeaker announcement at our platform? A delay of 9 minutes? Really? in Switzerland where trains - and everything else for that matter - run like clockwork??? Today of all days? Or is this happening every morning? I wouldn't know, I haven't been commuting to Zurich since the early 90s. 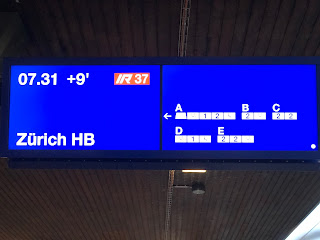 Back then I always managed to get a seat. These days? Not so much. 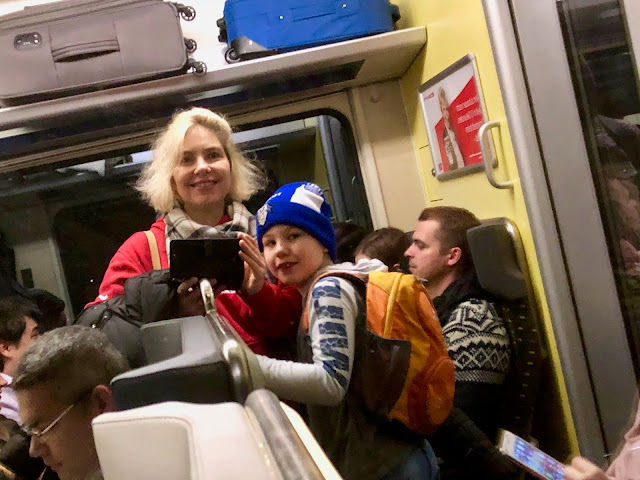 We spotted another kid on her way to work with Dad. They were playing cards. Cute! 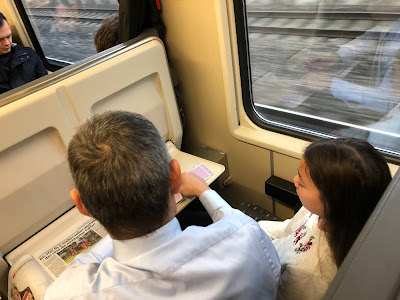 Train rides made this guy hungry! 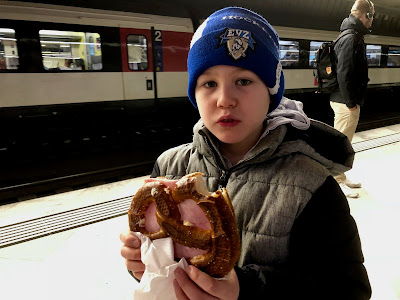 UPC's head office is literally across the street from Glatt, my favorite mall - and this is where I mainly spent my day until it was time to pick up Colin in the afternoon. 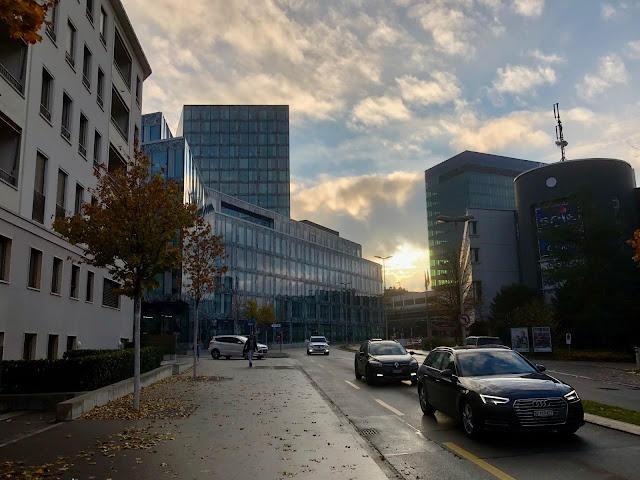 Off he goes! How exciting is this? 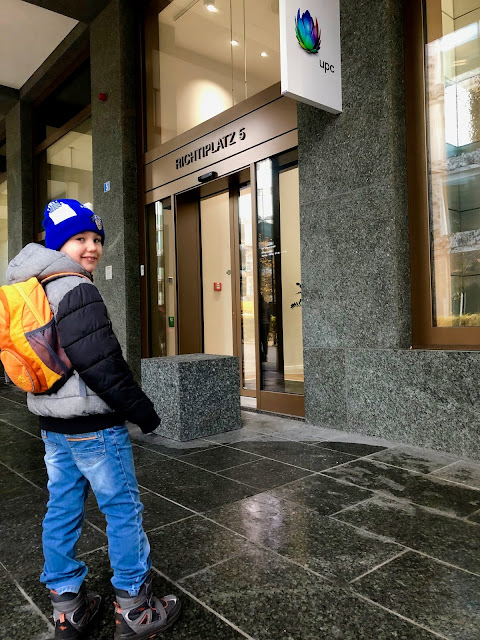 The kids who arrived with their Mom or Dad went directly to the meeting room, they call it Energy Lounge. Colin got picked up at the lobby. 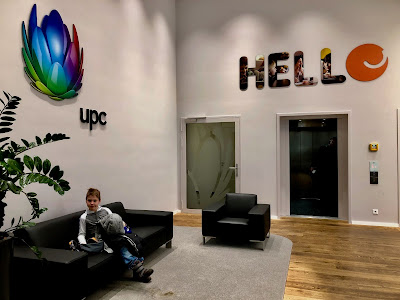 There were close to 100 kids, and they got divided into groups called Superman, Spiderman, Batman, Ironman and Hulk.

It didn't take long and Colin spotted a guy wearing a hockey team's hoodie, and boom, he made a new friend!

They were taken to the sports studio first thing. How did they get there? By bus. Not just any bus, though. A local hockey teams' official vehicle!

The studio we usually see on TV welcomed the kids, they were shown how everything works, and... 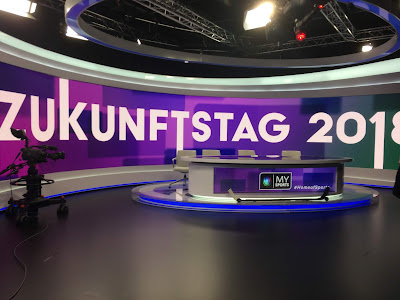 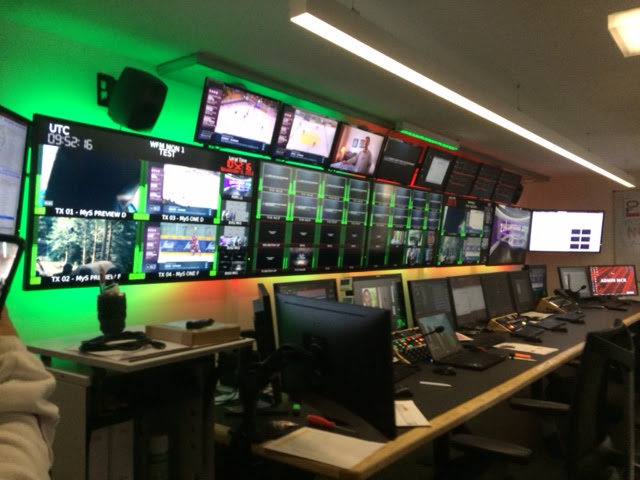 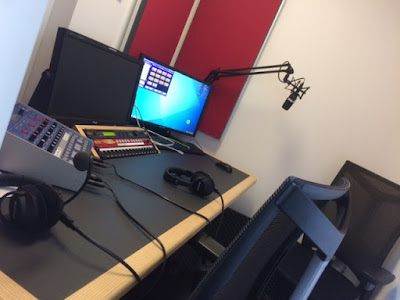 SURPRISE, Ms Buchli showed up unexpectedly! Colin quickly put on his hat so she would spot him as the hockey player who applied. Sure enough she and the two guys got into a discussion about the teams of the Swiss League: who will make the play-offs, who may actually drop out and play for the inferior league next season. She was kind enough to have her picture taken by one of the Dads. Thank you, Hans, for letting me use it! 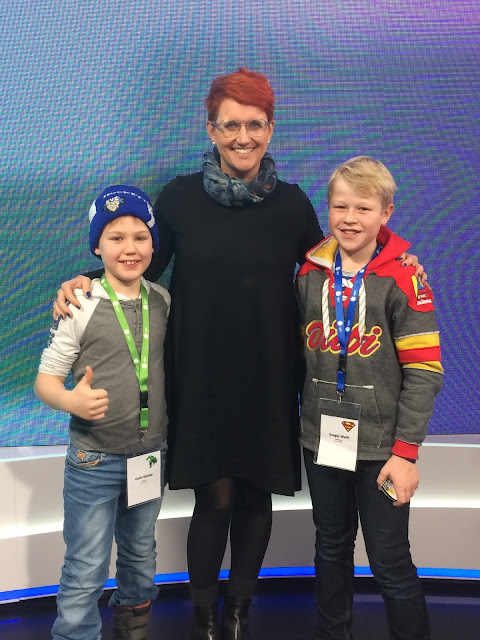 What an exciting day! We celebrated at our sushi train place, and speaking of trains... 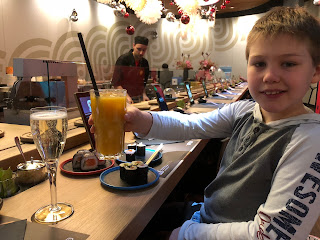 Colin got himself something to read for our commute home. 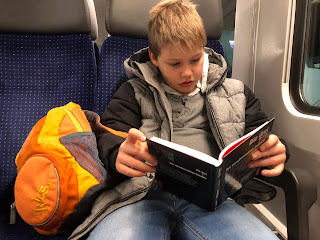 I don't know how much Colin learned about working for a sports channel but he sure had a fantastic day!