Under Arrest - D is for Death Penalty

You may have guessed, D is for Death Penalty, probably one of the most controversial topics.

In Switzerland we don't have the death penalty, as a matter of fact we have a bit of a feeble justice system. "in dubio pro reo" is certainly applied around here, which may be the liberal thing to do, but frankly, with so many repeat offenders released after a short while, you get the feeling the scare campaign effect is not working here.

Turns out it doesn't work in the U.S. either. Here's why:

There are a few different kind of violent offenders:
The first two are not able to think about the consequences before they act. Especially the ones who commit overkill. On the other hand professional killers know full well about their risks but are convinced they won't get caught.

There are statistics that prove that the death penalty states like Texas aren't safer than states without. The opposite is true; they have higher homicide rates even though they execute murderers.

On the other hand states like New York and Illinois (think mob!) that repealed the death penalty have lower murder rates.

New York accomplished this with a combination in changes in policy and practice. Mandatory minimum penalties were reduced and in some cases eliminated, and parole approval rates grew significantly.


Now a death penalty may appear "attractive" not only to family of victims but also to tax payers:

That bastard killed my (insert name of loved one), therefore he must pay! An eye for an eye! April Tinsley's family certainly thought so.

Clearly it must be cheaper to just kill a bad guy than to house, guard and feed them for lifelong sentences?

There are many articles out there listing cots, here's one I found that states that a death penalty case in Texas costs about 2.3 million dollars whereas imprisoning someone for 40 years in a high security single cell is only about a third of this amount.

What makes the death penalty so expensive?

Prosecutors and defense attorneys often spend more than a year preparing for death penalty trials. They rely on a lot of support from high quality experts like forensic scientists, psychological pathologists, handwriting or computer experts, as well as mitigation investigators.

What on earth is a mitigation investigator? I'm glad you asked: they research a defendant's past by collecting school, work and medical records, by talking to family members about the culprit's upbringing, alcoholic mothers, absentee fathers - anything that might influence the jury's appraisal of his moral culpability.

Back to the victims' families.

A trial is emotionally draining. You are confronted with the court system, lawyers, experts, witnesses, the perpetrator, the press and the public. Depending on the case most of them are sympathetic, but others, even if they're just doing their job, are attacking you, respectively your loved one, and making them look bad.

Ideally in a life sentence you're going through this once.

Just imagine in a death sentence, you'll never be able to move on. Just as your life seems to be somewhat "normal", there is an appeal, a parole hearing, anything, and boom, you're back to square one.

The average time spent until execution is 15 years. During that period of time death row inmates are housed in heightened security solitary confinement, which costs almost double per year than general population housing.

Just last month the governor of California put the brakes on the death penalty in California. 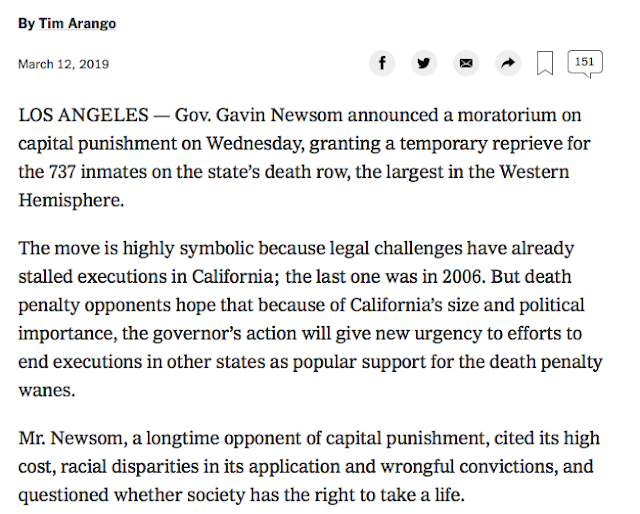 I found the list of death row inmates in California, check it out, Scott Peterson is on it.

California is in good company. More states are backing down and haven't executed an execution in a long time. Chris Watts should have consulted this map before hastily agreeing to the plea deal. The risk of actually getting the death penalty in Colorado is low: 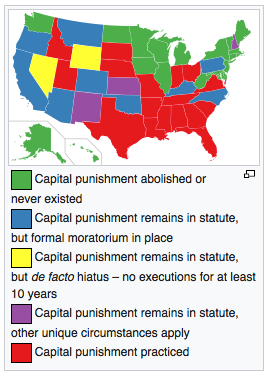 As more and more people oppose the death penalty, it's getting more and more difficult for prison executors to get their hands on the actual lethal injection drugs. Hospira was the only U.S. manufacturer of sodium thiopental, and they stopped making it in 2011. Correctional facilities are running out of drugs and are reaching out to European companies to try and source new supplies. Those enterprises declined.

So this is gonna be interesting.

Prior to the injection, however, comes a more pleasant part of the death penalty. The last meal. Death row prisoners are granted a food request, in some state there is a cost range within which you are welcome to put together your meal.

Lawrence Russell Brewer, a white supremacist who was convicted of a hate-motivated homicide of an African American, wanted the following: 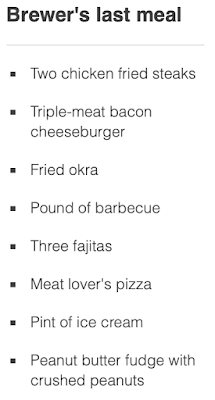 Whoa, that's a lot of food! The prison chef and his team went to work and delivered! When it arrived at Brewer's cell, he claimed he wasn't hungry and didn't eat any of it.

So one asshole spoiled it for all the prisoners who behave well and respect the rules.

Let's wrap up this gruesome post with inmates whose last meal requests made me smile and think that even hardened criminals are somewhat decent human beings:

David Leon Woods asked for pizza and a birthday cake which he shared with his family.

Philip Workman Declined a special meal for himself, but he asked for a large vegetarian pizza to be given to a homeless person. This request was denied by the prison, but carried out by many civilians across the country.

Victor Feguer wanted a single olive with the pit still in it. He told guards he hoped an olive tree would sprout from his grave as a sign of peace.

I just noticed somehow I keep talking about pizza in my criminally themed posts ;-)

How about you? Do you like pizza? I mean, are you pro or con the death penalty? Why?

Let me know below and make sure to be back tomorrow.