Under Arrest - E is for Evidence

Welcome back to A-Z, today we're talking about evidence, one of the most important aspects in a trial. Generally there are two types of evidence:

Circumstantial evidence
A police officer hears on his radio about a bank robbery taking place just a few blocks away. He turns on his siren and speeds toward the location when he spots a guy wearing a ski mask, running, carrying a heavy bag. While the officer didn't actually see the suspect at the bank, the man sure looks suspicious and has some explaining to do.

A 9mm gun was used to kill a victim. The supect owns this kind of weapon, and it's missing from his home. He claims it disappeared, and he doesn't know who took it. Did he use it to committ the crime and then throw it away? We can't know for sure.

Cadaver dogs alert to the smell of decomposition in an abandoned car. Obviously it was used to transport a body, just whose corpse was it, who killed the person, and where is the body (and the killer) now?

A credit card that the rightful owner didn't even noticed was missing, was used to make a huge purchase. The delivery address is not the original card holder's. How did the shopper get so lucky as to find the credit card..?

Just like a conviction without a body, a case that is based entirely on circumstantial evidence, is hard but not impossible to win.

What you have to do is convince the jury beyond a reasonable doubt (check back for the letter R on April 20)  that no one but the suspect could have committed the crime.

I'm sure you remember the Scott Peterson case. He was found guilty of murdering his pregnant wife Laci and their unborn son Conner on Christmas Eve in 2002.

Elements that lead to his death penalty conviction were the following:
So on March 17, 2005, Scott Peterson didn't have a fun filled St. Patrick's Day. Instead he moved into his new forever home at San Quentin State Prison. 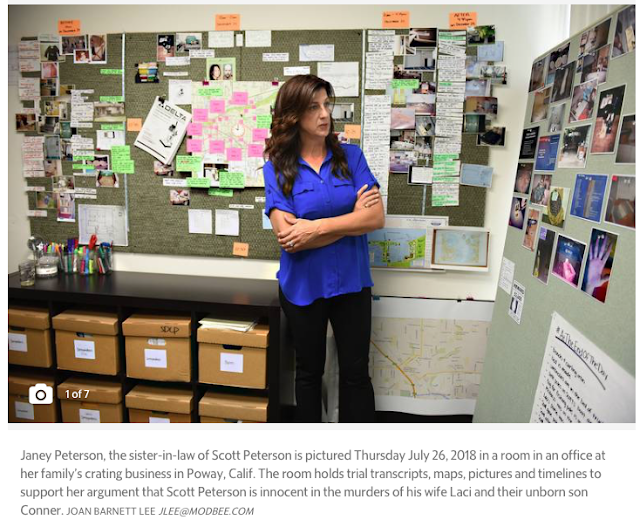 Janey, Scott's sister in law, is determined to prove his innocence. Here's what she has to say:

There seemed to be 14 eye witnesses who claimed to have seen a pregnant / fat woman walking her dog after Scott left the house, and obviously police didn't follow up on all of their calls. We can't know for sure if it was Laci, but we also can't know it wasn't her.

There was also a mailman who knew the Peterson's dog. It always barked when he delivered the mail. When the postman arrived between 10:35 and 10:50am on Dec 24 the dog didn't bark, and the gate was open - an indication that Laci and McKenzie (= the dog) might in fact have gone for a walk. This is kind of relevant because computer evidence shows that Scott was logging on at his warehouse computer at 10:15am. Still, just because the dog wasn't there, doesn't mean Laci hadn't been killed and transported to the warehouse.

Evidently there were many "Laci sightings" reported, coming from 26 different states, even overseas, so we can't know how reliable the tips that Janey talks about might be. 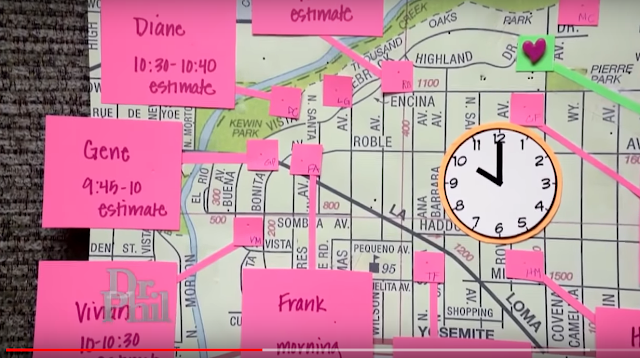 She also claims errors were made during the jury selection process. Every potential juror that stated to be against the death penalty was excluded - even though they should have been asked the follow-up question "even though you're against the death penalty, would you be able to render that verdict?" To which they might still say yes. I'll be talking about jury selection later this month. Stay tuned.
Furthermore, the questionnaire that every potential juror has to complete, asks "have you ever been a party to a law suit, have you ever testified in court, have you ever been a victim to a crime?" The infamous Strawberry Shortcake juror, Richelle Nice, checked the NO box to those question and was therefore lying - she shouldn't have been on that jury. Clearly she had unresolved issues against her ex who threatened her and her unborn baby, so she wasn't an unbiased juror for that particular case.
Prosecution did a reenactment of the "body dump", using a similar boat like Scott had, however their boat capsized ;-) The jury was not allowed to see this video.
The search dog I mentioned above was one in several that were hired, but only this one's handler was allowed to testify. Other dogs obviously indicated information that could have helped Scott's defense. Here's a hint: I'll be talking about search and rescue dogs shortly.
Do you think prosecution had it right? Or are Janey's points valid? Should his appeal be granted? Let me know.

For now I'll let you move on with your day - hope to see you back tomorrow!