When properly completed by a qualified professional, the PCL-R provides a total score that indicates how closely the test subject matches the "perfect" score that a classic or prototypical psychopath would rate. Each of the twenty items is given a score based on how well it applies to the subject being tested.

A lot of words to describe a complex mental disorder. Let's look at traits we may recognize:

Factor two psychopathy = sociopathy displays a lack of empathy, difficulty to form close relationships who can't understand another person's feelings. There's impulsivity and irresponsibility going on, they're leading a parasitic lifestyle, living off others, not contributing, They're more likely to violate social norms, break the laws. There's a lot of anger, anxiety or depression tied in with criminal acts.

Poor behavioral control (think low tolerance to frustration) leads to aggression, juvenile delinquency and a tendency to be released from custody and then to reoffend.

(Factor one) psychopathy refers to a callous and calculating person who has a grandiose sense of self, thanks to a narcissistic component. This person, while superficially charming, is a pathologically lying con artist who is really good at convincing people to give them status, favors, money.
They're unable to form genuinely close relationships. Criminality is planned out carefully: stealing, manipulating other people, killing them if necessary. Psychopaths are aware of consequences and are considering them: how not to get caught. Fairly calm even under pressure. No remorse.

I tried to visualize the traits: 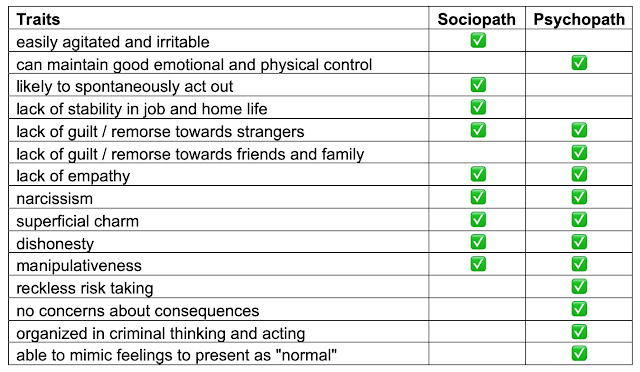 While I am not qualified to use the PCL-R checklist (you may, however, download it for a fee) muss less to diagnose people by using my Wikipedia acquired knowledge, the traits above scream Casey Anthony's and a certain U.S. President's name!!

There is this neuroscientist James Fallon, you may have heard his name. He conducted a major study that found at least two abnormalities in the brains of adult psychopaths. There was a lack of gray matter in the section involved in processing emotions, while the area that reacts to excitement and thrills is overactive.

While working on his study subjects James felt he needed a few "normal scans" to compare the psychopathic scans to, so he had some taken of his own brain.

Imagine his surprise when his own came back almost identical! He told his wive about it, probably expecting her to say "there's no way, there must be some mistake."

Guess what? Instead she said "well, that explains a lot!"

This brings up an interesting point, though. Not every psychopath is an evil criminal!

There are lots who lead normal lives among us. God knows I had one or two bosses who displayed tons of those traits!

Many are successful professionals, just like Mr Fallon. They are CEOs, government officials (there we go again), law enforcement officers and lawyers, chefs, journalists, surgeons, sales or media people.

However, you probably won't find psychopaths in the typical "helping people" jobs because they require selflessness and empathy.

Now the million dollar question: (how) can you treat antisocial personality disorder? (ASPD)

We have to remember that these individuals don't feel remorse so why should they even care and try to get better? If psychotherapy has been ordered by the court they may charmingly simulate remorse or cooperation while really manipulating mental health professionals.

There is no FDA approved drug to specifically treat ASPD, but medications such as antidepressants, mood stabilizers and antipsychotics can be used to control symptoms such as aggression and impulsivity.

Christopher Fisher is an expert in clinical health psychology and behavioral medicine. He did a neurofeedback study for a small group of patients diagnosed with ASPD. Over the course of a year his patients completed on average 100 QEEG neurofeedback sessions and have reported significant results, even in their follow-up exam two years later.

So that sounds promising! I have no idea how expensive this is, though, and if it works on a large scale.

Bottom line: the majority of these people are stuck in prison. And boy, are there many! A review of studies on mental disorders in prisons stated that 47% of male and 21% of female prisoners had ASPC.

What do you make of this topic? Did you recognize some symptoms in your boss or neighbor?

Thank you for reading. Hope to see you back tomorrow!