Under Arrest - W is for Warrant

Welcome back to A-Z, almost there! W is about Warrants.

In my post about forensic evidence I promised you guys to tell you about how to obtain said evidence legally. Here we go:

If cops bang at your door and want to search your house - what do you do?


A (search) warrant is a piece of paper issued by a judge allowing law enforcement to search whatever is stated on there: maybe it's just your phone, maybe it's all electronic devices, maybe it's your car or your entire house.

Police officers must give the judge probable cause as to why they want to search your property. They have to state the nature of the crime they are convinced you committed and provide facts why they think it was you.

May cops just call a judge and tell them they need this warrant pronto?

Nope. They need to sit down and type their statements including their observations or those of eye witnesses or other law enforcement officers. This piece of paper is called an affidavit.

There is an exception to the rule, however: sometimes time is of the essence. If this time that is necessary to get a warrant would jeopardize public safety of lead to the loss of important evidence, police are authorized to conduct a warrantless search or arrest.

Cops are about to arrest an alleged drug dealer outside of his residence. The suspect yells into the house "quick, honey, flush everything!". Of course the officers will storm into the house and prevent the girlfriend from doing so. Also they'll arrest everybody and seize the drugs.

A police officer cruises his town and hears noises coming from a house. He has to assume that a woman gets beaten, and she screams for help. Of course he'll barge in and arrests the assailant on domestic abuse charges. If there's a gun involved, it'll be seized. 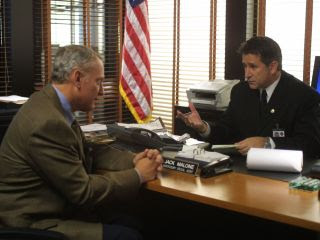 As you know I always like to "illustrate" theoretical content with a real life case. What I have here is an episode of "without a trace", one of my favorite law enforcement shows.

Andy, a student at a private boarding school, disappears from campus. FBI missing persons department soon suspects Graham Spaulding, the headmaster, but he seems very smart and alert, so they have to surveil him without him noticing he's a suspect.

FBI agents Danny Taylor and Martin Fitzgerald get a blueprint of Spaulding's house, and also a copy of a permit to build a room in his basement that includes plumbing and electricity.

While this could be an innocent spare guest room, agents' fantasies are running wild: The room doesn't have any windows or doors leading to the outside, could it be a holding cell? A torture chamber?

At this point they don't have a search warrant. So Jack Malone, their boss, orders them to inspect the grounds, see what's visible through the windows.

As Danny and Martin sneak around Spaulding's house they hear something - a whimper? Could it be Andy, kept trapped?

Against their better judgment / training, Danny enters the house and follows the noise. Sure enough the sound leads him to the basement that is set up as a photo studio / darkroom where he encounters a dog.

"Since I'm already here, let's snoop around some more, hold on, what's this?"

Unfortunately, the photo album was not obtained lawfully, so they try to get their search warrant retroactively. Here's what the judge says:


Ouch. sometimes it sucks to have to follow the rules.

It gets worse. After they find out about a handful of other missing / dead boys connected to Spaulding, they actually do get the arrest warrant and pick up Spaulding to transport him to detention.

In an attempt to find Andy alive, they ignore Spaulding's asking for a lawyer and keep interrogating him in the car until he tells them where Andy is.

The good news is they found the boy alive hidden in a cave in the forrest.

The bad news is that Spaulding's "confession" would not hold up in court because it was extracted illegally.

Every kid knows the following rules:


So this all happened in Season 1, episode 5 "Suspect".

We have to wait until Season 2, where in episode 5 "Copy Cat" it looks like the FBI is finally going to catch that guy Spaulding and put him away forever. They do - in a different way that you might think, though, but he's not bothering anyone anymore.

If you were in Judge Adderley's position, would you have issued the warrant? Can you see another way to find the missing boy and to arrest the suspect?

Let me know down below. Thanks for reading, hope to see you back tomorrow.
A - Z Blogging Challenge affidavit arrest confession evidence facts legally obtained Miranda rights probable cause search seize Warrant without a trace