Under Arrest - X is for X-Ray

Welcome back to A-Z. Today's letter is X, and probably half the A-Z Blogging Community tries to squeeze their overall theme into x-ray.

In my post about forensic science I hinted that I was going to talk about autopsies and one part of it is x-ray.

Families sometimes shy away from autopsies. They don't want their loved ones cut open.

In Lausanne, Switzerland = my country, they do "virtual autopsies", which means they send the body to the CT scanner. Many injuries are well visible. They inject dye into the blood vessels to determine where stab wounds are located. Weapons and projectiles and their angle can be detected. It's pretty neat.

X-rays are the best way to make a match as far as forensic dentistry is concerned. Identifying an individual by their teeth without dental records is much more difficult. However, things like broken teeth, missing teeth and gold crowns might be recognized by the friends and family members of the deceased.

Of course that's not all there is about the medical part of forensic science. There's a whole bunch of other methods.

Let's have a look:

One of the important questions when a dead body is found, is "how long has it been here?" In other words, when was the TOD time of death, and what was the COD cause of death?

If the body is relatively fresh, there are a couple of pretty straight forward things that are done to help you jump-start the investigation:

Measuring the body temperature: within the first 12 hours of death your body temp cools with a rate of about 1.4° F per hour; after this, the rate is only about half until it reaches room (or the surrounding area's) temperature.

Here's another example: a body has been found, and the medical examiner measured a liver or rectal temperature of 67° F (19.5° C)  - which tells you right away that this poor person has been lying there for far more than 12 hours. But how long exactly? I'll spare you the math and tell you it's been about 33 hours.

So that may give you an indication when talking to witnesses and suspects. You need to go back 1.5 days for alibis.

Stomach content and blood work will give you information about TOD and COD if drugs or poisoning have occurred:

The process through which food is absorbed into the body can take anything from twenty two hours to two days to complete, and within that time food is broken down and reduced to a liquid pulp from which essential proteins are extracted.

Given that this process can take such a long time, the contents of the stomach - and in particular their condition at the time of autopsy - can help to estimate the time of death.

Also it can be used to prove if the deceased was perhaps lured into a false sense of security by their assailant by having a meal with them. A good example of this would be if the deceased's stomach contents consisted of some sort of pizza. (It's been a while that I've been able to incorporate pizza into my A-Z theme, so hooray for today!) 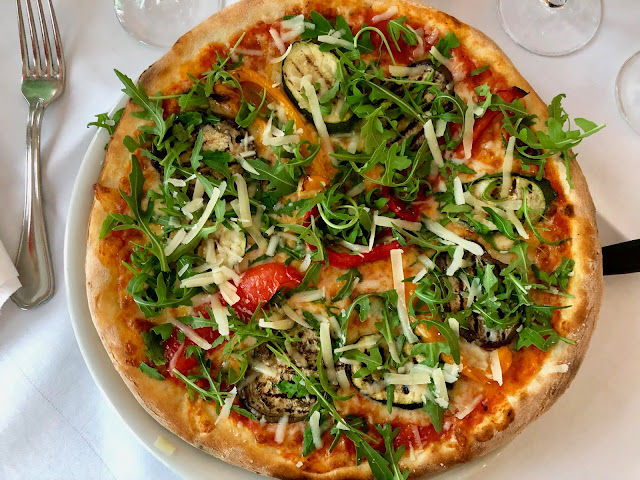 The pizza would take roughly two hours to digest within the stomach, and if the autopsy was performed and showed that the pizza was still in the stomach, then it would be safe to assume the deceased died within two hours prior to discovery.

As a generally accepted rule stomach contents are analysed for trace elements of poisons or other toxins that might not normally be found in the deceased's system. This is useful if there is a suspicion of drug abuse or poisoning.

As I was saying, these methods are great if you only just found your victim's body. What if you find it after a couple week or months even? It is badly decomposed and probably not easy to even identify. Here are some interesting departments taking care of business:

The University of Tennessee Anthropological Research Facility (better known as the Body Farm) in Knoxville, Tennessee has a number of bodies laid out in various situations in a fenced-in plot near the medical center. Scientists at the Body Farm study how the human body decays in various circumstances to gain a better understanding of decomposition.

During the Casey Anthony investigation (here we go again - that's the beauty of my theme, you can apply it in so many ways!), multiple witnesses, including a police officer with experience with decomposed remains, noticed a “decompositional” odor in Casey Anthony’s car.

Tests were later done of the air in the trunk by experts from the Body Farm, to show that a decomposing body had been in the car. The judge’s ruling allowed these witnesses to testify to this information before the jury.
The Casey Anthony jurors also saw testimony from a forensic entomologist, Neal Haskell, regarding insect evidence. He explained that the insect species present at the body site indicated the body’s long-term presence, that it had been there since June or July before being discovered in December 2008.

He also explained that insects collected from the trunk of Anthony’s car indicated the presence of a body for a short time before being removed – an implication previous witnesses had suggested throughout the week. Entomological evidence is the most accurate indication of time of death once the body has decomposed.

Unfortunately this didn't prove beyond reasonable doubt that and how Casey killed her little girl, and she walked.

There we go. Thank you for reading. You go and get yourself a nice pizza today, alright? Have a fantastic weekend, see you back on Monday and Tuesday for the remainder of the alphabet.

How do you feel about stomach contents, decomposing odors and bugs? Personally I don't mind researching them, but I would probably be super appalled in real life.