June 21, 2019
To be clear from the beginning, this post is not about Wayne Gretzky.

It's a tribute to my Grandma who passed away yesterday, at the age of 99, and she was a great lady, hence the title.

While she did not suffer from any particular illness that caused her to die she just got weaker by the years.

We spent a lot of time together when I was a kid, and I especially enjoyed her company as we went to the mall when I was a teenager . Even though she was not old on paper, she had white hair early on, and the sales assistants at the trendy stores were relieved when it turned out we were there for me, not her ;-)

Same for my coworkers with the job placement agency I worked for some 20+ years ago. One fine day in waltzed my white haired Grandma while I was on my phone and couldn't approach her. I swear my teammates were nervously drawing a stick to determine who had to tell her that there's probably no job for her out there.
She didn't know any of the crappy jobs we offered. She had the most important job of being a Grandma to my baby Brother and I.

My Grandma was born in Germany, and her Dad had the great foresight to leave the country as national socialism was spreading rapidly in the mid-1930s. She was the youngest of three siblings, and when they arrived in what was later going to be Israel, they had nothing. They lived in tents and worked long and hard hours in agriculture.

She met my Grandfather, who was a fugitive from Russia, respectively Austria. He joined the British Army to fight in the Arab Revolt in Palestine.

Later he worked three jobs to provide for his family. Yes, the year Israel was founded, they had a baby girl, my Mom. Five years later they also welcomed a boy, who is my uncle.

I like to think that my Grandparents and their generation contributed a great deal to the creation of this unique country, and it bugs me that the current generation kind of takes everything for granted.

My Granddad had the opportunity to finally finish his studies, and upon graduating he got a job offer in neutral Switzerland, and he didn't look back.  Stability, security, political freedom, what more do you want with a personal history like his?

My Mom was less happy to leave her friends behind and start over with very limited language skills. Her plan was to meet a nice Israeli and go back ASAP. But you know what they say about the best laid plans... and so she ended up with my very Swiss Dad.

While Grandpa was pretty opiniated about certain things (my brother's leaving Switzerland in order to become an Israeli was certainly not his idea of a smart decision, and my wanting to become a career counselor was dismissed with a quick "breadless perspectives", go work for a bank") Grandma supported us in all of our decisions.

She may never have graduated from school but she knew that life was going to teach us the most valuable lessons - and that she was gonna be there for us no matter what.


Up until she was 95, she was doing really well, considering her age and especially compared to her fellow inmates. Although her hearing was bad and she refused to wear her hearing aid, she was able to make conversation, her mind was in excellent shape, she got places with a cane or a walker, and she went to the bathroom on her own.

Since September 2015 her condition started deteriorating rapidly. She was hospitalized twice. Within no time she needed a wheelchair and a catheter, and she got confused at times. However, she would always recognise us - especially her beloved great-grandson, Colin.


Now that she needed help for pretty much everything, speed of service at her nursing home turned out to be an issue. She pressed the button and waited. And she waited. When nobody arrived, she tried to help herself. She managed to climb out of bed or the wheelchair even though she was restrained. Once she obviously cut open her pants with scissors because she couldn't get them down when she needed to pee.

She told me "if I had money I would quit this ?#@*&% place and live somewhere better." She also asked my Mom to take her home.

She hadn't been doing well, and she had been talking about leaving.

"I've had a good life, but it's time for me" she would say every time we said goodbye.

For the past few years with every birthday approaching she always thought she was turning 100 years old.

And she almost made it! This is the last birthday we celebrated together. 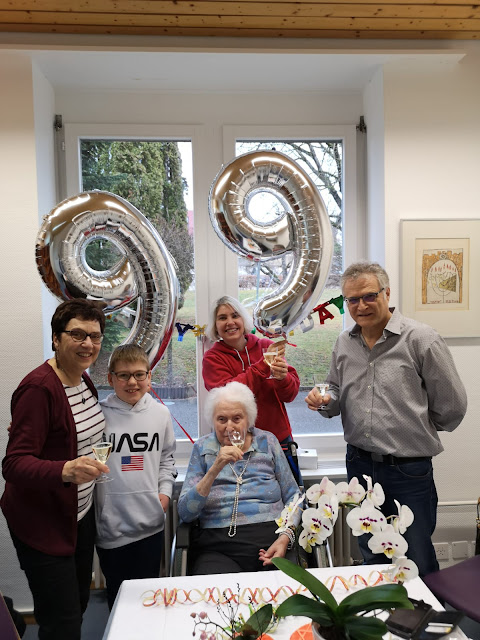 Rest in peace, Grandma. Your husband, brothers, cousins and parents will be there to welcome you with open arms!