Do you enjoy raking leaves?

Did you enjoy it as a child?


It was submitted by: Spatulas on Parade  - thank you, Dawn!

Among others we had a maple tree. My mother "planted" it. This is the back story:

She grew up in Israel. In her garden there were mainly evergreen citrus trees and palm trees. (Guys, I'm just having an epiphany: this is why I would love to live in Southern California!!!)

When she moved into the Swiss house my Dad grew up in, she had no idea what was expecting her. I think she took her duties as a Swiss Mom and housewife very seriously, She wanted to blend in and didn't want the neighbors to complain about weeds spreading to their gardens. So she bravely pulled them up on a regular basis.

One day she came across something she thought was a legit plant, but it was growing someplace inappropriate. Without wasting much thought on it, she pulled it including the little roots and pretty much just put it somewhere else.

Fast forward a couple of years, and we had a majestic maple tree on our hands. And you all know why fall is called fall. Because of the falling leaves. Which I had to rake.

And because it was a maple tree it didn't stop at the leaves. Thousands of "helicopters" made the job even more annoying.

As time went by, the tree kept growing, and its roots started to mess with our garden: The formerly flat lawn became somewhat rippled, and the little fence walls started to crack.

I felt like as soon as I moved out, my parents started talking about cutting down the maple tree.

I was shocked and annoyed at the same time.

Shocked because the tree was planted the same year I was born - it was basically my twin or something. It was part of my life. Annoyed because I had put a lot of blood, sweat and tears into its care, and now that my parents were about to lose their little garden gnome they weren't willing to do the work themselves?

Can you believe my Dad?

"If you come to the house every fall to rake the leaves, we'll keep the tree."

And I grudgingly complied.

After a few more years the tree had to go just the same. Made me kinda sad. By the way the age-worn cherry and apple tree suffered the same fate.

My invidiious childhood chores It didn't stop at raking leaves.

I grew up in a house with no dishwasher or dryer, so we had to do and dry the dishes and hang clothes in the yard. And as if this wasn't enough, we also had to mow the lawn, pull up weeds and sweep the paths leading to and from our house. The one on the East side of the house leads to a major main road. Inconsiderate people throw their cigarette butts, empty packets, bottles, tissues, and frankly you don't wanna know what else out the car window. Why? Because they can, and somebody else - me - would pick it up.

I hated it with a passion.

I especially hated the fact that I seemed to be the only one who had to do it.

On Saturday afternoons, while all my friends were painting the town red, I had to slave in the garden. No fun. Also it's not that my Dad believed in paid child labor.

Of course if I dared to complain, I had to listen to the "when I was your age" stories, and I felt like it really wasn't my fault that my Dad was a post-war child, and all they ate were potatoes, blablabla.

I get that this instilled admirable values, and I give him credit for this and more in a post I wrote five years ago.

The other thing that always bugged me were his strict rules concerning curfew. I'm not talking about wild parties on school nights, I'm talking about innocent get togethers in a family's basement in our village or the next town on Saturday nights.

When I would ask if I was allowed to go, there'd be an inquisition:

Whose house it it at (as if he actually cared to get to know my friends), when does it start, and more importantly, when does it end.

Stupid me always answered truthfully. "It's over at (insert school mate's name) and it's till 10pm" I'd say.

It's either this or you don't go.

Did he care how I'd get home by myself at night? Nope.

One night I was late by 2 or 3 minutes. He threw a fit. To this day this still makes me so angry.

I see 14 year old me sitting at my friend's house, tying my shoelaces when her Mom approached me asking "Sweetie, what's wrong?"

"What happened? Did you have a fight, did a boy not want to dance with you?"

Nope. I just need to leave.

"Are you sure? How are you getting home, don't you want to go with the other kids?"

"Oh. OK. How are you getting home? Do you want me to drive you?"

Thanks, I got here by bicycle. I'll be fine. I'm used to it.

I had to leave, otherwise I would have thrown myself around her neck, sobbing. Plus it was getting late.


In Switzerland we have church clocks that toll every quarter of an hour, and of course at the full hour. Just as I was parking my bicycle in the shed, the clock rang 9:30. I thought phew, I made it ijust n time.

As I came through the door, there was my Dad, his face  looked pretty annoyed.

"What do you think you're doing?"

Yeah, and it's probably 9:32 now. I had to leave earlier than all the others, I raced as fast as I could, I put my bike in the shed and here I am!

"Not good enough. Clearly you should have left earlier."

I am so sick and tired of this rule. I am 14 years old, I do well at school, I do everything you ask of me, and all the others are allowed to stay and drive home together. My friend's Mom actually offered to drive me so I'd be safe!

"Now that's ridiculous, you're perfectly capable of getting home by yourself. I told you, it's my rule. Follow it or don't go out at all. The choice is yours, and let me tell you, not being a follower strengthens your character."

And off I stormed to my room.

You guys, I can see this scene before my inner eye as if it was yesterday.

Years later, after having moved out, I tried to talk to my Dad about it, and he was very unregenerate. He insisted, it was a good rule, and I didn't suffer any damage as far as he could tell.

I don't think so. I am a parent myself now, and while it's a different generation, yaddayadda, I feel this was not right.

What it did for me though is that I decided then and there that I would never do this to my own kids.

Instead I'm that Mom that attends (the first period of) a Champions Hockey League game with her soon to be 11 year old son. On a school night. Drinking Prosecco. Just me, though. 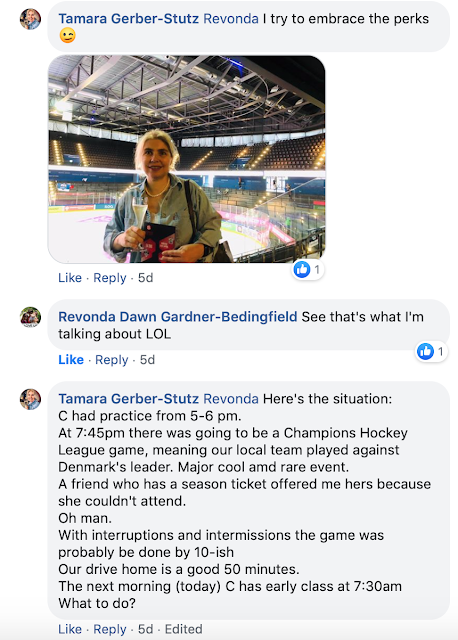 I just think life is short, and Colin should enjoy his childhood, and the time I get to spend with him is precious, and I want to soak up the experience. 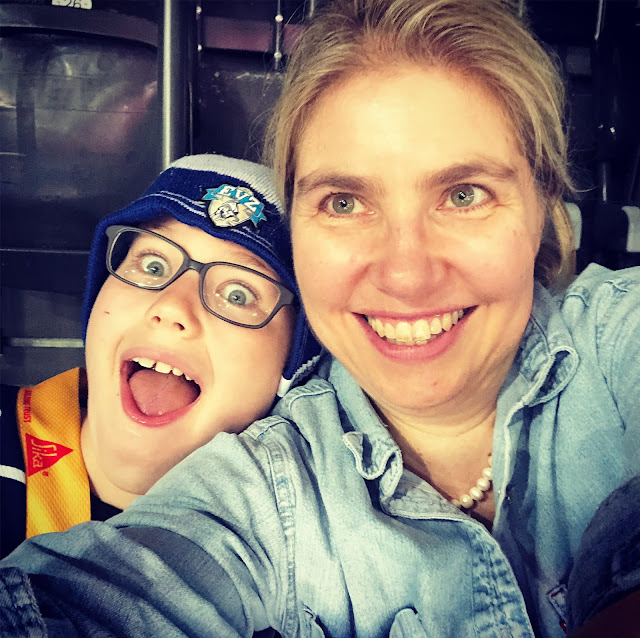 The next day he told me he probably flunked his test.

"On ancient Rome and stuff. I probably should have studied Thursday night, but you know, priorities."

I didn't know about the test, and I tried not to beat myself up about it. He's almost 11, he's in 6th grade, he's super smart, and ge is supposed to balance his weekly responsibilities. His wonderful teacher provides checklists and runs a reward system for students who follow through. He usually does well because once they're done with their compulsory assignments, they get to play on the iPad.

Not to worry, though. He ended up having a B.

Oh, and of course, now that my Dad is the Granddad, he dares to undermine some of my rules! But you knew this was coming, right?

How do you feel about raking leaves, curfew and the ambiguity of being a parent?

Let me know down below and don't forget to check out my fellow bloggers' posts.