Use your Words - Don't push my Buttons 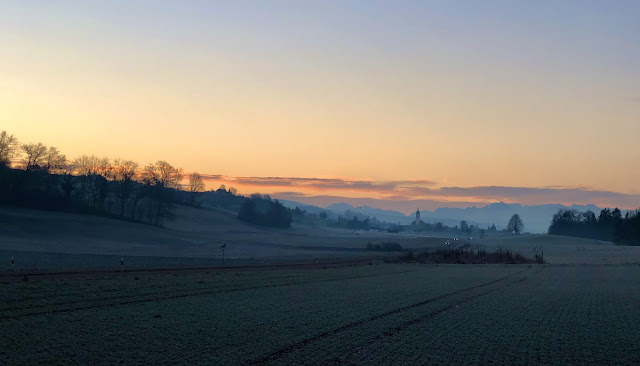 They were submitted by: Follow me Home   - Thank you, Michele!

Interestingly, when I was working on last month's post, this was my intro:

Well, it's 12/12, a full moon, we got a little snow, and I didn't catch much sleep. In return I have this nagging migraine-like headache.

This month's full moon (1/10) was a wolf moon, the first full moon in the winter quarter, and at the same time lucky observers could also witness a penumbral lunar eclipse.

Be that what may - here I am back with a SOB headache.

The new year is already in full swing.

On Saturday before Colin was supposed to go back to school, he noticed he was getting zits. "Mom, look, first signs of puberty", he said, a little proud. Oh, wow, no kidding.

A few hours later he said he wasn't feeling well. We were at my Godfather's to celebrate his birthday. C didn't want to eat the soup, instead my aunt offered chocolate (yes, that's what the Grandparents' generation does without batting an eye), but even so he declined.

The next morning he was supposed to play a hockey game. He got up and had some breakfast, but I could tell he was not in great shape. He was pale, which made his pimples look even more pronounced.

Suddenly it hit me.

"Hey, C, show me your stomach, do you have spots there, too?"

I know I am the baby within this blogger family. You seasoned moms already had an idea what was going on here... Upon googling my suspicion I got confirmation: it was chicken pox.

Somewhere deep in the back of my mind I remembered that his paediatrician had said if by age twelve Colin didn't have it, we should do the vaccination. I guess we saved one needle peek, but instead he was going to suffer from these itchy little bastards.

Also, we found out that he had already been contagious a day or two before showing signs.

He was at practice on Friday, sharing the locker room and public shower with a good twenty other boys. After this, he and his friend had the honor to welcome the top scorers of the home an opposing team prior to the puck drop of the Friday night game. 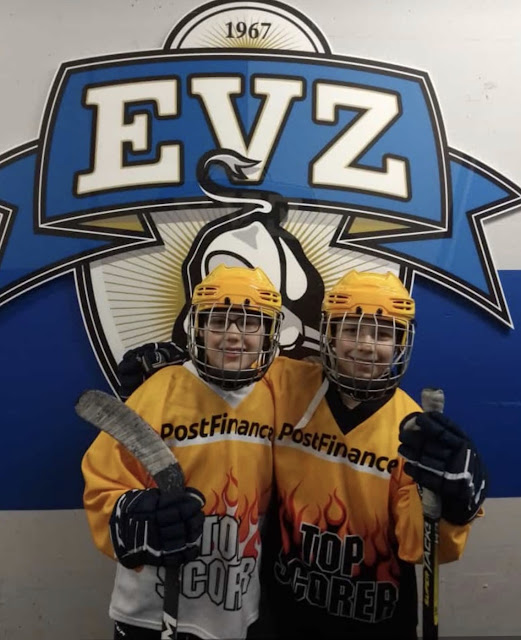 In a frenzy I not only texted his coach and staff members that Colin was not going to be able to play today, but all of his teammates' parents to let them know he may have infected their kids.

"It's good that you're doing this" Colin said. "I wish this other mom would have been more careful."

Turned out just before Christmas he was at the grocery store with this friends, and there was one buddy's younger sister with her mom. "She looked like our oven cloth, just the other way round", he told me. Our potholder is red with white polka dots. Enough said. Her mom had half assedly asked her daughter not to get too close to the other kids.

That's just like "why did the cats cross the road - because the owner told them not to."

So instead of finally going to work to catch up on what I had shoved into my to-do drawer, I raced to 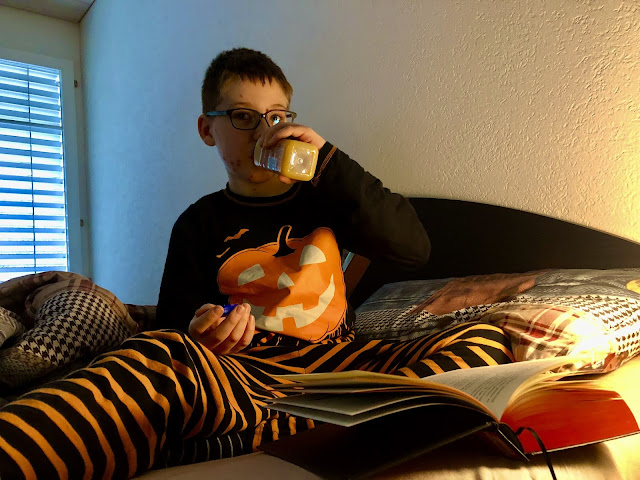 After a few days he was feeling better and starting to enjoy his prolonged Christmas break. On the other hand he also got stir-crazy. That's when he began to push my buttons.

Doing his homework for school? Folding some laundry? Taking a shower?

Everything was too much to ask.

I was pretty happy to send him back to school this Monday, and even though he was grumbling, he was looking forward to seeing his classmates.

As for me January is a bitch at work. You may remember that this time last year my coworker passed away, and even though we were actively looking, we didn't find somebody suitable to take over his duties.

So it's still pretty much hubby and I who have to take care of JC's clients, mostly payroll users. Hubby thinks I am predestined because of my Human Resources background.

I am good with people, not figures, and I suck at accounting, this entire stuff is responsible for my headache, see beginning of this post.

I haven't even started doing our own social security declarations for 2019, let alone January 2020 payroll because I am on the road a lot.

You see, we had sent out this Christmas card: 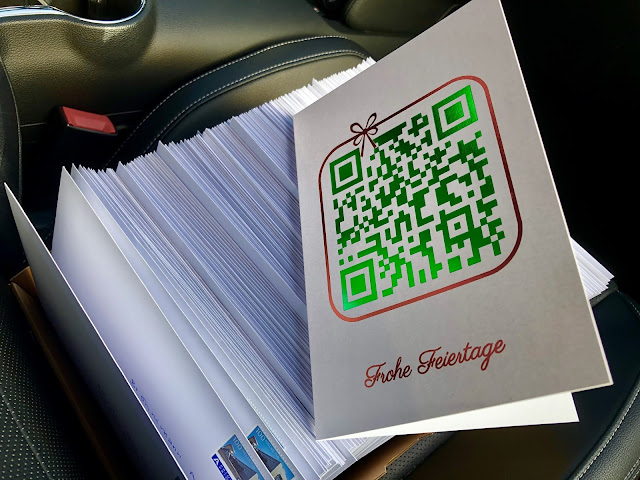 Yes, it's a QR-code, and about 10% of the recipients realized they should scan it. It led to our happy holidays page where we asked them to register for a chance to win.

Now each and every one who registered is of course a winner, and what they get is a carrot cake, made by our local bakery, hand delivered by me. 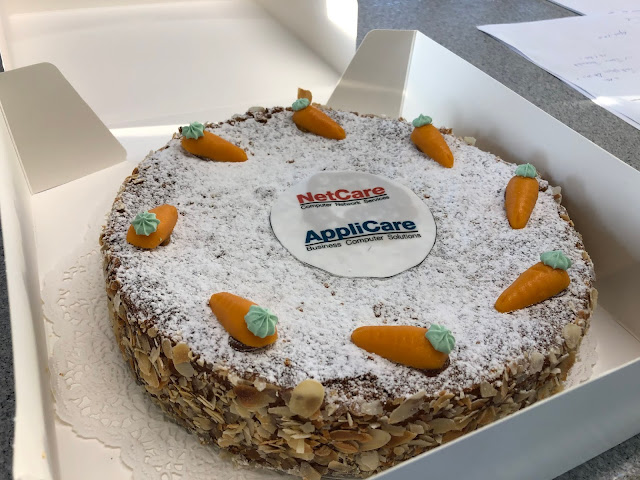 Even though Switzerland is a small country, and we are only active in the German speaking part, the miles and hours add up.

It's fun, and I love the meet the clients whom I have on the phone all the time but never see their faces. I get to see nice landscapes and neighbourhoods, too. Doesn't this look like in San Francisco? 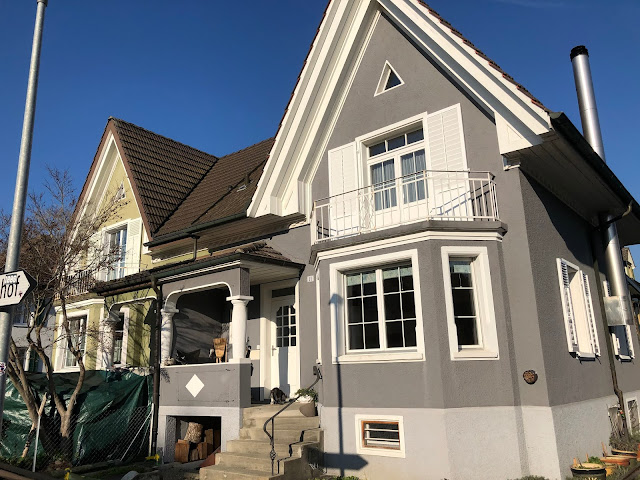 I just wish someone would take care of things at home and the office. Any volunteers? Here's some chores to chose from:


I'm sure there's more. I am happy to tell you though that I put away all things Christmas.

What's on your mind / to-do list? Let me know in the comments down below.

I published another post today as part of the 20 Days of Chill I'm participating in. It's called Snapshot, check it out!

Other than that, please visit my fellow bloggers Use your Words posts: