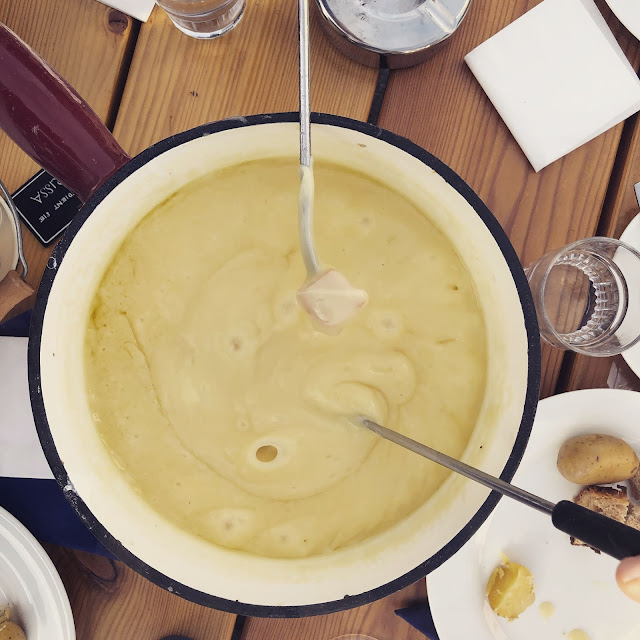 Welcome back to my Swiss themed A - Z! Today's letter is F, and of course F is for Fondue, our number one cheese dish!

Like every other culinary specialty it hasn't been around forever. Here's the story of our Fondue: Peasants from the French part of Switzerland invented it. It was their way of using up hard cheese and dried bread. Fondue translates as "melted".

But what exactly is it today?

Fondue is a melted cheese dish served in a communal pot ("caquelon") over a portable stove ("réchaud") heated with a candle or spirit lamp, and eaten by dipping bread cubes or small potatoes into the cheese, using long-stemmed forks.

Now here's a word of advice: be very careful with your bread. Make sure it's skewered securely, otherwise you're in trouble. The person who loses their bread in the cheese will have to do one of the following:
You have been warned ;-)

Another warning: while making Fondue or Raclette at home is super cozy and yummy, it is also smelly, and it'll take several days until you'll get the smell out of your clothes and house.

This is why I prefer to enjoy these dishes when eating out.

You don't have to ski to visit a Chalet (typical alpine hut), they also exist in regular towns, even in the flat country. Even temporary, mobile chalets will pop up everywhere in October, November.

How is Fondue prepared?

You buy your grated cheese mixture at a cheese factory or a supermarket. First you rub your put with a garlic clove. You heat white wine with corn starch and add your cheese. Stir for quite some time until the cheese is melted. Season with black pepper and nutmeg. Add a bit of Kirsch (cherry liqueur) if you like.

If children will eat with you, you may use apple cider instead of white wine and hold the Kirsch. 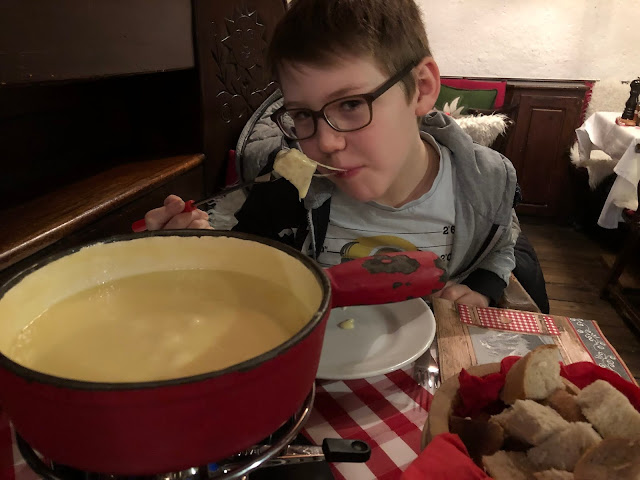 Can you use any type of cheese?

Absolutely not. For most fondue mixtures Gruyères is the basic cheese.

One of the most popular Fondue varieties is called "Moitié-Moitié" (=half/half). It stands for Gruyères and Fribourg Vacherin.

In the canton of Appenzell (the ones who didn't want the women to vote) use their own Appenzeller cheese and add some cream.

There are countless varieties of Fondue. Some like to add mushrooms, spicy chilli or crushed tomatoes, in Zermatt they serve a Fondue prepared with local alpine cheeses from Valais, Prosecco and slices of fresh pieces of pear - I have never had it, but now I can't wait to go there and taste it.

OK, now we know about Fondue, but what is this other dish, Raclette?

It's the perfect dish for you if you're intrigued by Fondue but not so sure about sharing a pot with other people.

Raclette is the name of a semi-hard alpine cow milk based cheese, usually shaped into a wheel, which is heated, and the melting top layer will be scraped onto your plate. Racler is French for shaving off.

Raclette is served with steamed potatoes and pickles. 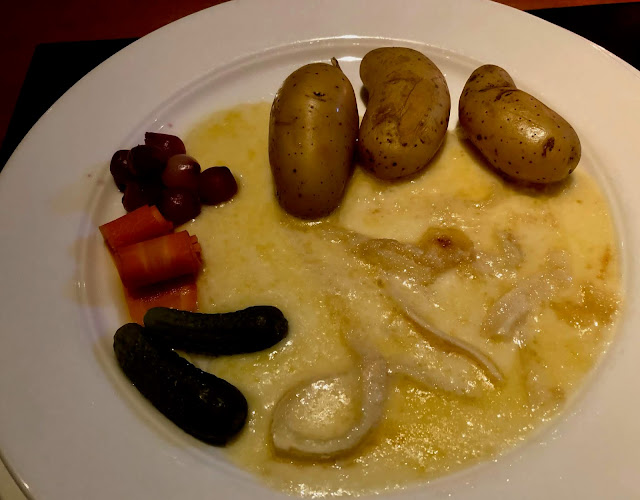 Anything else we need to know about Swiss cheese?

Indeed. Let's start with the difference between Swiss Cheese and Cheeses of Switzerland.

Swiss cheese, or just "Swiss" is some low quality industrialized cheese variety, typically showing some wholes, made and sold anywhere in the world.

Cheeses of Switzerland are roughly 450 varieties of cheeses made in Switzerland, the most popular being Emmentaler, followed by Gruyères, Appenzeller and Raclette. 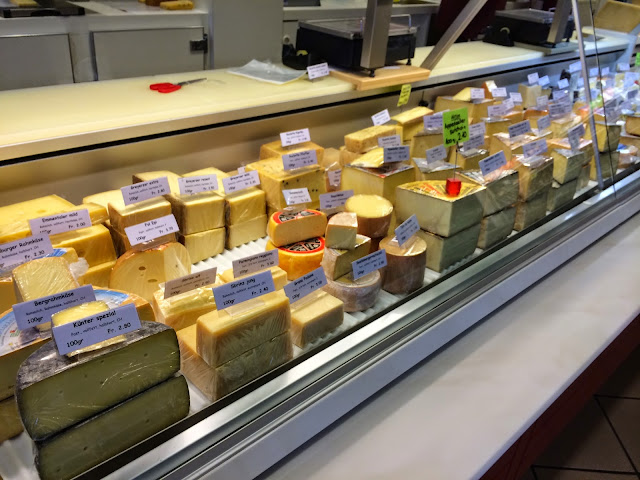 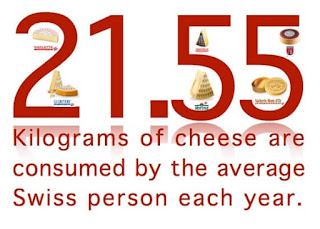 Speaking of Emmentaler, how do the holes get into the cheese?

However, the larger the holes in the cheese, the more trouble for cheese slicers!

Do you like cheese? Which one is your favorite? Have you ever had a Fondue or Raclette?

Be sure to pop in tomorrow for G is for Grüezi at the Gotthard - even though you may have no clue what I'm talking about. You'll know all about it after reading my post.