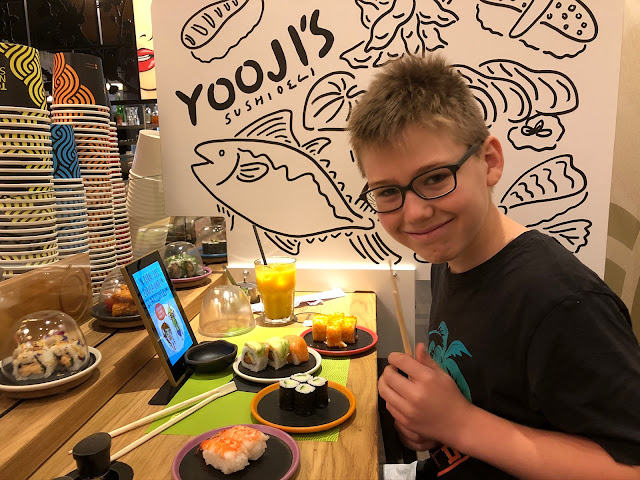 It was submitted by: A 'lil HooHaa - thank you, P.J.!
Sounds like a simple prompt, but frankly, sometimes the broadest themes are the hardest to pin down! Is family my parents and my brother? Is it my husband and my son? Do we have, by any chance, the same traditions, because that would kind of be the idea of a tradition - to carry it on to the next generation.
Since I am not a fan of doing things just because people have always done them and done them in a certain way, I won't use this post to talk about the Holidays. Or maybe a little bit. We'll see.
I went through my photo library and found some recurring pictures year after year.
As an example our Pit Stop Day.
Regular people have their wheels changed at the closest shop possible and hope to spend less than half an hour to take care of this bi-annual chore.
For us, somehow, things turned out to be different. I purchased the car I drove when Colin was little from a dealership located just at Zurich's city limits. This fact alone (the ride at non-rush hours was 40 minutes each way) ruined the idea of a quick errand.
Instead we turned it into a day of having C's hair cut, eating lunch, visiting the toy store, riding the tram just for the fun of it and enjoying a donut or ice cream, you get the picture.
Let's start at the beginning.
Do you know of a baby or toddler that likes to have their hair cut?
I sure don't.
From the very beginning he was very fussy about it. His fidgeting around made it hard for the hairdresser to do her job. I was thinking about it long and hard, and from somewhere back in my mind I thought I might have heard of a kids' place that let the young customers sit on a Bobby-Car and watch a movie. Perfect!
Such a place existed in downtown Zurich. They rented some space inside the toy store. Very clever!
It was not cheap, but it was worth every penny. Look at him, holding perfectly stil and enjoying his video, probably "Disney Cars". 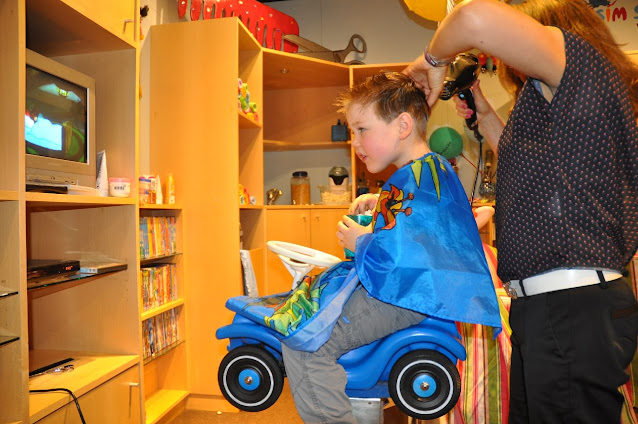 Speaking of... Outside the store there was a toy Lightning McQueen. So for good behavior at the hair salon, Mommy would produce coins to let the engine rev up! 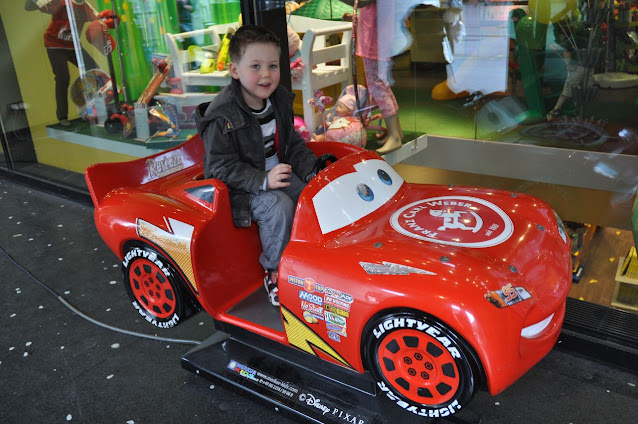 First we needed to check out the toys inside though. 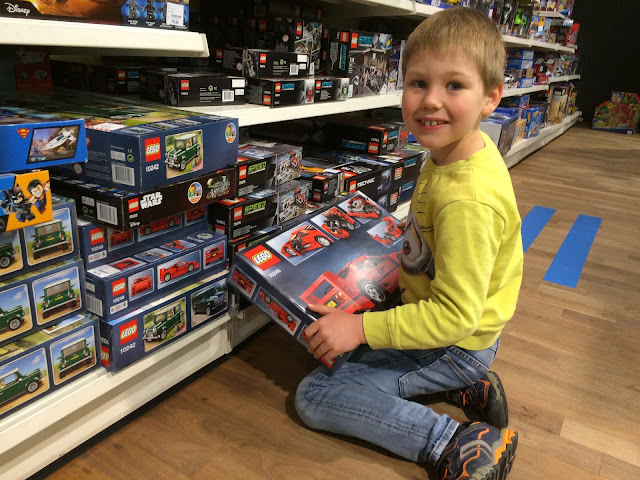 During summer breaks when all of his friends went away to the beach and stuff, and we had to wait for our fall family vacation, we like to treat ourselves to Japanese lunch at the mall's sushi restaurant. Colin especially enjoys the fact that the dishes may be picked from the sushi train or ordered via tablet. 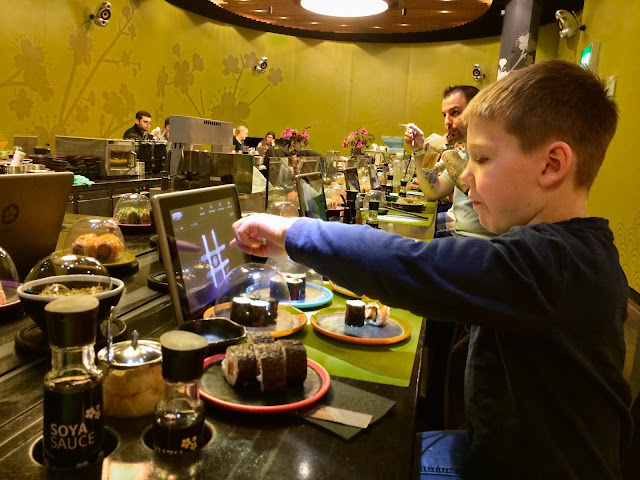 The tablet not only allows you to view the menu and order your food, it also features a regular internet browser as well as games. So usually for the youngster it's sushi and Tic-Tac-Toe!
You wouldn't believe the fine motor skills he has been practicing upon all these sushi lunches over the years! Stick handling comes in handy for a hockey player, too ;-) 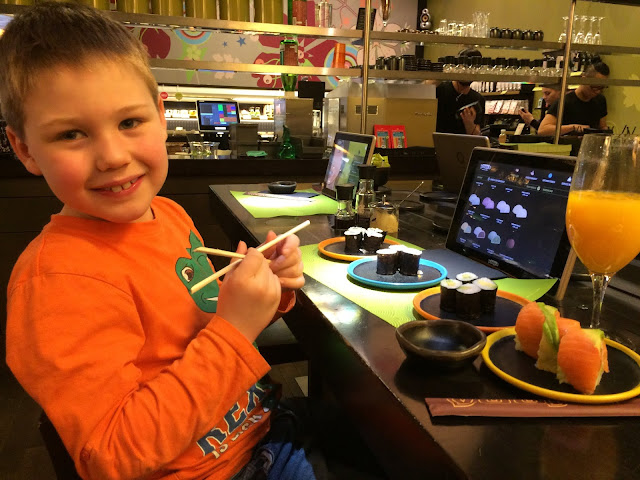 After all that raw fish I am usually ready for some coffee and a cinnamon roll. While we don't have Barnes & Noble with integrated Starbucks Coffee corners in Switzerland, clever retail developers just made sure the book store and my espresso place are located really, really close to each other.
So close in fact that from a pretty young age, C would beg to be allowed to go ahead on his own, and I would let him do so. I know to some of you this sounds like something you would never do.
In Switzerland the kids are encouraged to walk to Kindergarten and school when they're really small. Us parents need to let go and trust that nothing bad happens. We barely have incidents in the streets, let alone kidnappings. So allowing my kid a little freedom seemed reasonable enough.
It helped that Colin has been able to memorize my mobile phone number from a very young age.
When I was being caffeinated properly I would walk into the book shop and look for him. It was like a scavenger hunt every time.
He might be sitting on the floor... 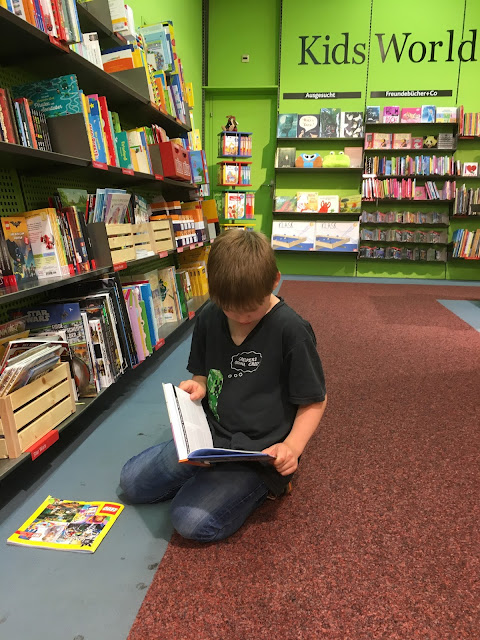 Or manage to grab a comfy chair 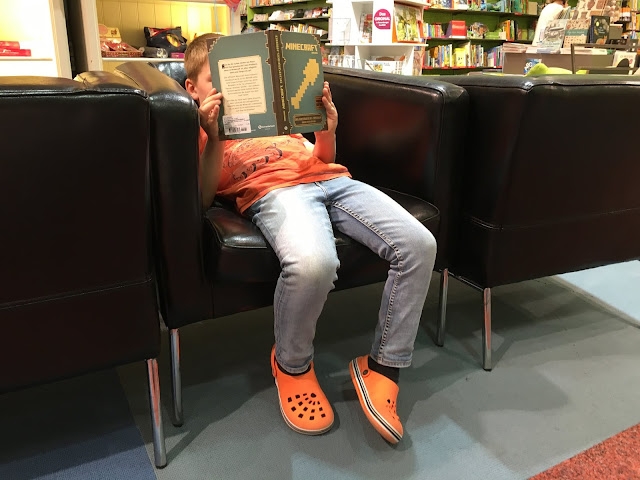 For even more comfort, remove your shoes! 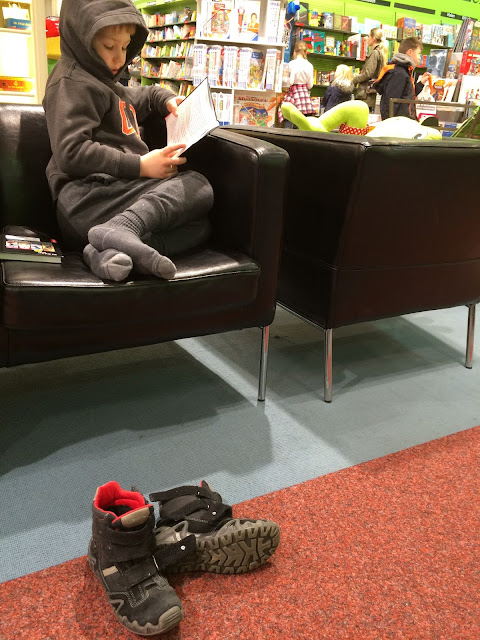 This one is the ultimate bookworm chair. Do you recognize this character? It's Greg, the star of "diary of a wimpy kid", and this was Colin's favorite book series at the time. 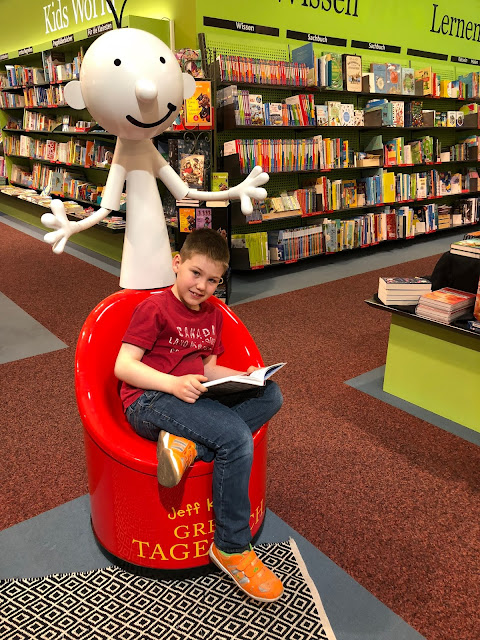 Kids grow. Kids need new shoes, new jeans, new jackets, you name it. So sometimes I had to take him to the mall. And because I don't like to drive during rush hour, I would pick him up straight from school. So he would be doing his homework at Starbucks - because why not? 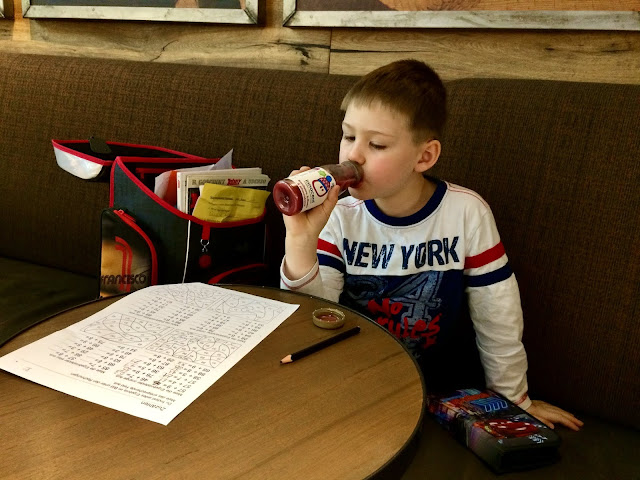 OK, by the time I'm scheduling this post, the votes have not been counted, and emotions are running high, so I decided for a little bit of Holiday tradition!
In times before hockey, when the first Sunday in December would be just that, a day off, we would always go and meet the Harley Santas. Their main charity they dedicate the Holiday event to is the children's hospital, and in the beginning, their ride would actually lead up the hill where the hospital is located, they would park their beautifully decorated motorbikes and visit the kids. 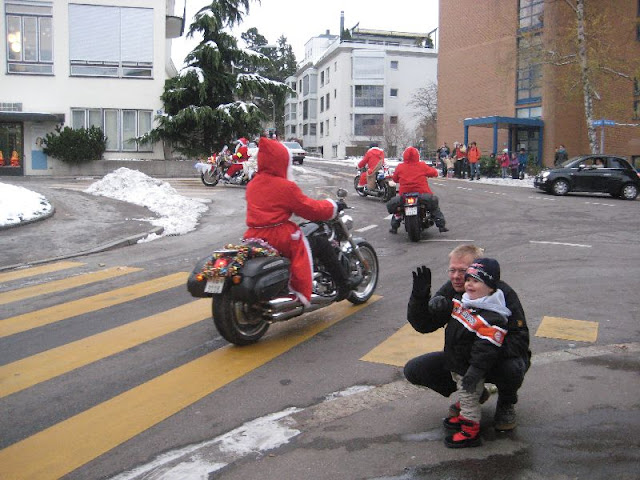 For some reason this was discontinued. It probably caused too much disruption at the medical facility?
So these days they gather at the Harley Dealership, ride through the city of Zurich and end up at the plaza of a crowded mall. You may have guessed, I don't like to go there.
Instead we meet the Santas at their home base. Over the years we made friends with one of them, and he's always happy to show us his bike and let Colin take a seat. 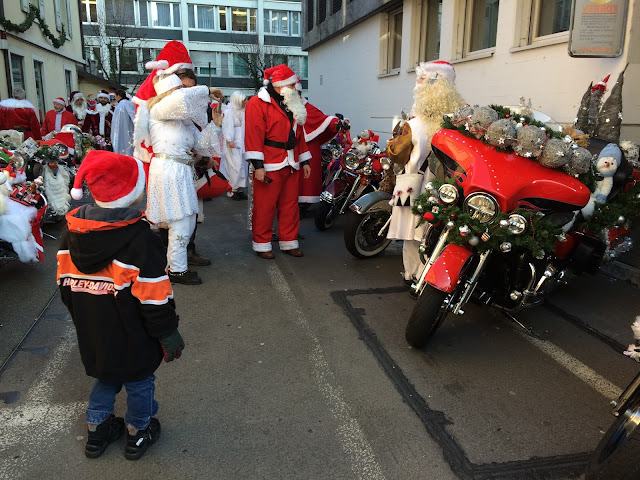 Can you tell I miss the carefree quality time before school, before hockey, before Covid?
How about yourself, what family traditions do you cherish - today more than ever?
Let me know below, and please also visit my fellow bloggers' posts.
Happy Friday, be calm!
book store bookworm Coffee diary of a wimpy kid Family Hair Appointment Harley Santa homework Mall Memories reading rituals Secret Subject Swap sushi train Tic-Tac-Toe toy store traditions