Welcome back, this alphabet posts are coming along nicely, don't you think? Yesterday we built Rome in a Day, I mean, we accepted that it wasn't actually built in a day.

Today's letter is S, and I chose it stands for

Swim with the Sharks

There are other sayings that represent the same meaning:

Let me start by saying that sharks (and airplanes) have a bad reputation – which is unfair.

Statistically, driving a car is far deadlier than flying. Still, people drive every day without giving it any thought.

It's hard to find reliable and comparable statistics. According to Wikipedia, between 1958 and 2020 there have been 439 fatal shark attacks worldwide, 36 of them in the USA.

The Washington Post put together a nice graphic telling us that in the U.S. 58 people are being killed by bees, wasps and hornets every year. Multiplying by the 62 years it took for sharks to finish off the 36 Americans, that's 3,596 deadly insect stings.

Don’t even get me started on motor vehicle accidents (2.7 million in 62 years).

There's another saying related to swimming:

Swim with (or against) the tide - and swimming against the tide of course means to swim uphill.

Who would actually make this huge effort, you may ask?

Salmon - that's who. They are born in freshwater streams and rivers, and live their adult lives in the ocean.

After spending 2-7 years in saltwater, they are mature and ready for the final and most difficult journey of their lives.

In the fall, mature salmon return from the ocean to the stream of their birth to lay eggs in the same spot where they were born.

To accomplish this, they must swim upstream against the current or flow of the stream. They typically travel hundreds, if not thousands of miles, at a speed of 18 miles a day - just imagine! Swimming upstream!

I mean - our parents thought they had it rough. After all they had to walk to school uphill, both ways!

How do the salmon know where to go?

Scientists believe salmon use a combination of a magnetic and celestial orientation and the memory of their home stream's unique smell - obviously salmon can detect one drop of water from its home stream mixed up in 250 gallons of sea water.

In the course of this journey they eat nothing, using the energy they stored while they were in the ocean. Finally, those who survive, reach the river where they were born years earlier.

Salmon are all bright silver while in the ocean environment, however when the they return to freshwater to spawn, they undergo many physiological and morphological changes. First they must switch from using saltwater to freshwater. Returning to freshwater, they change body color from a silver to a brown, green or red depending on the species, Sockeye, Chum, Pink, Coho or Chinook being the most popular ones.

The female digs a hole in the gravel with her tail and lays a few thousand eggs in the hole that will be fertilised by the male fish. Eventually, after 12 - 20 weeks, an average of three new baby salmon hatch out of these eggs.

There are some dangerous obstacles that often interrupt or terminate the salmon’s return home, aka salmon run:

Predators waiting for their lunch!
And can you blame the bears (or eagles, sea lions, whales and sharks, and let's not forget humans)? I mean most people like salmon. Because Sushi. 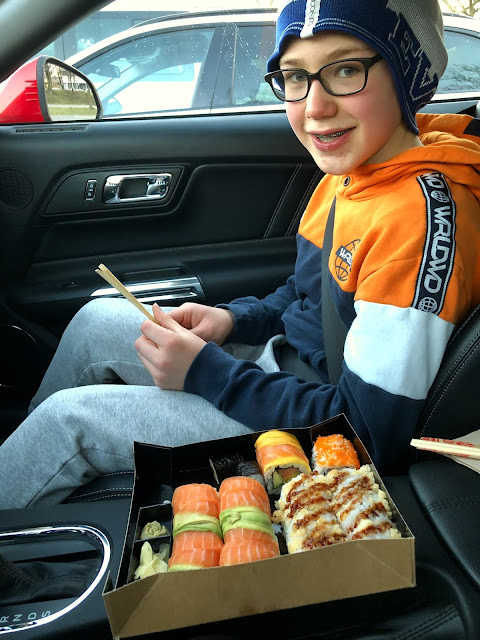 I didn't know this, but after spawning most salmon die. Even though while living in the ocean  they're building up fat reserves, they put so much energy into swimming upstream, remember, 18 miles every day, hurling themselves agains the downward flowing water, it is beyond exhausting.
So they go through all that trouble to lay their eggs and never even meet their babies. How sad!
This brings up another question: Who takes care of the salmon babies?
The answer is "the great nutrient cycle". As salmon grow in the ocean environment, they accumulate marine nutrients and store them in their bodies. After spawning and dying, they decay and release those nutrients, which then fertilize the water that feeds the developing salmon.

So basically the babies eat their parents' remains. Wow. Nature is brutal. I think I need a break.
I'll see you tomorrow.
In the meantime tell me in the comments below if you've ever been stung by a bee, had a car accident or a heart attack and whether or not you like sushi. Oh, and have you watched Seaspiracy? (I haven't) Lots to talk about.
Be sure to come back tomorrow, we'll broaden our minds through travel.