Mercury and Saturn 🪐 vs Sun ☀️

When you're young, you're not wasting much thought about your health. You eat and drink what and as much as you want, and if you're not athletic, so be it, you're not sweating not going to the gym and just living and enjoying your life. A cold or a flu here and there will remind you for a brief moment that it's not fun to be sick. As soon as you have recovered, business as usual resumes.

At least that's how I roll.

My second Covid vaccination knocked me down. I spent two full days in bed, only to get up to go to the bathroom, and even these trips exhausted me. I dragged myself out of the house on the third day because I wanted to keep an overdue dental hygienist appointment. Went straight back to napping.

Speaking of overdue - I made another try at finding a GP.

Since returning to Switzerland after living in California for a while, I didn't have a family doctor. That's twenty years ago. It's not that I didn't want one, they get fewer and fewer, and they are just not accepting new patients. I have a dermatologist, a gynocologyst within a ten minutes' drive and my "iron doctor" a 30+ minutes' drive away. I usually go see him for general things beyond iron. It's not ideal though.

I was quite happy I scored an appointment with a family doctor in the next town, who recently took over the office of the established "village doctor" who retired.

He has challenges in the field of time management, meaning you'll have to wait patiently. That's probably why it's called being a patient? Anyway. Once you sit across, he'll take the time to listen to you. What I particularly like about him is that he told me while he is an orthodox medical practitioner, he doesn't consider himself being a tool of the pharmaceutical industry, and he didn't particularly approve of my taking statin meds to lower my cholesterol over decades. Apparently it also lowers the "good cholesterol" and is suspected to promote Alzheimers.

So after discussing it with him and doing some online research, I ordered a natural remedy containing bergamot extract.

Have you ever actually seen bergamot? I have not! To me this was something that I happened to read in fragrance descriptions. I didn't even know it was a citrus fruit!

So I can't wait for my order to arrive, and I will re-check my levels in a couple of months.

Additionally, my bloodwork revealed a Vitamin D deficiency. It looks as though my level is 17 mol/Liter whereas the recommended amount would be 75 - 150, some even go as far as saying it should be 100 - 200. Wow!

The reason I even asked to check Vitamin D, is that a friend who lives in Turkey suffers from it. Even though she lives in the Mediterranean where the sun always shines, and Vitamin D is primarily absorbed through the skin that is exposed to UVB rays from sunlight, she lacks Vitamin D. How? And why? It's too hot to go outside! Plus she has sensitive skin and will always apply sunscreen when going outside. I'm the same way. There you go.

I watched a video about the symptoms of Vitamin D deficiency, and I have quite many of them (fatigue, hair loss, lower back pain, lack of drive, weight gain), so I'm hoping to see improvements there as well.

I also checked the symptoms of Vitamin D toxicity, meaning having too much, and I also have symptoms?!? Fatigue, thirst, frequent urination, stomach pain.

To be fair, either symptoms are pretty generic and could be from anything.

Foods that are known to provide Vitamin D are fatty fish like salmon. So even though they may contain mercury, a little sushi can't hurt, right? Love me some rainbow rolls. 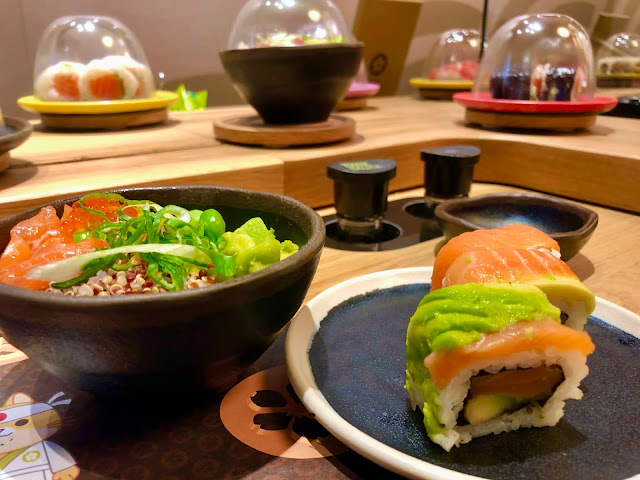 The "good news" is: the larger the fish, the higher the mercury concentration. Swordfish, shark, king mackerel, bigeye tuna, marlin are the worst.

So salmon, shrimp and scallops are actually on the lower end where mercury concentration is concerned. Phew. They contain Omega-3 fatty acids, which is said to reduce cardiovascular disease. That's what I need!

Other Vitamin D foods are egg yolk, cheese and liver and other innards, however, they also contain cholesterol, so I have to go easy on them. Talk about conflicting qualities.

Why am I so worried about cholesterol in the first place?

Ma paternal Grandma died from cardiovascular disease when she was in her mid-40s. My Dad was Colin's age, a very young teenager. So I never got to meet her. My Dad had bypass surgery in his mid-50s following a heart attack. My brother and I and all our cousins keep checking our levels from an early age on, we grew up avoiding butter, eggs, whipped cream, too much cheese and sausages, and I have been taking meds on and off, depending on the doctor.

I don't particularly like to be on drugs on a permanent basis, I don't even like to take something when I have a headache or something. I believe in listening to my body that usually wants to tell me to take it easy.

So my new doctor who asked me if I was opposed to try something natural? Bring it on! He says the patients who tried this, have good results.

I will report back.