Tell me about your favorite Memory from the month of August

It was submitted by: What TF Sarah - thank you, Sarah!
After checking back with Karen, and given that today's only August 6, I will use this prompt to talk about a month of August in the past.
Switzerland's national holiday is August 1st, and as kids, we loved this opportunity to stay up late, enjoy dinner from the grill and wait for it to become dark for the fireworks. One night does not a month of August make though, right?
So let me take you back to the year 1999. My ex-boyfriend and I were working for the same large company, he was in sales, I was in HR. The company was about electricity metering systems. So basically computers. Which were said to be critical as we were approaching the year end. The millenium end, more like it. Remember Y2k?
Anybody who had any technical experience whatsoever, was sort of compelled to help out updating clients' systems. Which was fine for my guy. His geographical area usually included corporations in Germany and Poland. Imagine his surprised (and delight) when he was asked to go to Curaçao.
To be honest, I had no idea where this was even located. "Blue Curaçao" was a tropical liqueur as far as I was concerned.

"I negotiated a flight for you" he proudly announced. "We may take a few extra days off and make it a vacation?"
Wait - what???
As tempting as it sounded, I had just taken over my own business unit to take care of HR-wise, yet another due diligence for a spin-off as well as my exams were coming up. Parallel to working 120%, I also attended classes and studied for my HR certification.
"Bring your books and study at the pool while I work", he suggested.
I liked his way of thinking.
Off to Miami we flew soon thereafter.
He was the guy with whom I almost got stuck without gas in the Death Valley. Or didn't manage to drop our rental car at Tampa Ariport in time to make our flight. Sure enough, it got really, really dicey in Miami again. We thought we had plenty of time to spend at the Factory Outlet, not taking into account traffic. I was supposed to take a later flight anyway, so I just dropped him at Departures and proceeded to find a parking spot to run inside and check if he had made his flight.
Even though some people already had cell phones, ours didn't have the bandwith that was customary in the U.S. back then, so we could not even reach each other. There was a lady still shuffling some papers at the check-in counter, and I asked her if that young man that came running made his flight. "He sure did" she said. Good for him.
I went back to the hotel and packed the newly acquired clothes. The next day I made sure to be at the airport super early to drop the car and check in in a controlled and relaxed manner. After a three hours' flight he picked me up in Willemstad, Curaçao.
By the way, if you're like me wondering where exactly this exotic place may be found: here's a map: 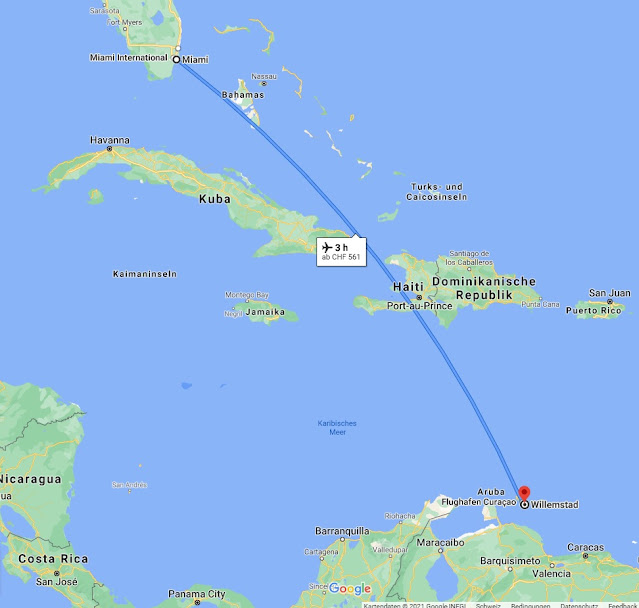 Curaçao is the C in "ABC Islands", Aruba, Bonaire and Curaçao are self-governing consistuent countries of the Netherlands (formerly Spain), located in the Caribbean Sea, and that's what their Papiamento language sounded: a little bit of Dutch (which has similarities with Swiss German), a little bit of Spanish/Portuguese and a little bit of French. So even though I was not able to speak to the people, I understood some isolated words of phrases.
I think this is the environment the Beach Boys had in mind when they composed "Kokomo". Kokomo is the name of one of the gorgeous beaches in Curaçao.

It's no surprise the island lives off tourism. People come here for scuba-diving and snorkling. However, Curaçao also provides financial services, think off-shore companies, plus they do oil refining.
I didn't pursue any of this. I took M at his word and brought my books. Labor Relations, Social Securities, Training & Development, Staffing, you name it!
When he was off work in the evening, we did a little exploring. Sadly the few paper pictures we took must have ended up on his pile after we separated two years later. Good thing there's the internet where you can literally find anything these days. This way you can get an impression.

What makes this August memory unforgettable, was the unexpected (and free of charge) way in which we ended up making this trip at very short notice. If I got a free flight to anywhere in there world, I would probably not pick this destination again, even though it was nice and exotic.
Have you ever ended up somewhere totally by surprise? Would you follow through if given the opportunity?
Let me know in the comments and please visit my fellow bloggers' posts!
Happy Friday!
PS: In case you were wondering: What is Blue Curaçao? Its flavor comes from the peel of the Laraha citrus fruit (which has been dried) and is grown on the island of Curaçao, hence the name. The blue color in the liqueur simply comes from food coloring.
ABC Islands August Caribbean Curaçao Memory Millennium Papiamento Secret Subject Swap Summer Willemstad Y2K