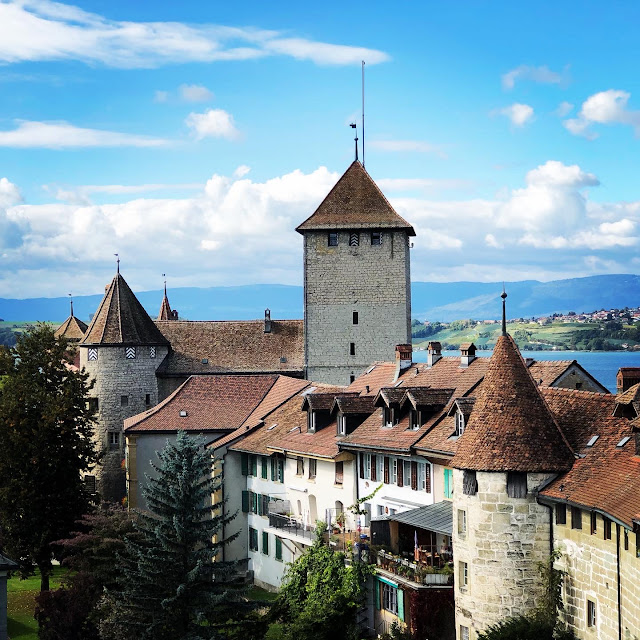 Welcome back to Day 4 of the Ultimate Blog Challenge. For some reason, the e-mail containing today's prompt, didn't arrive, so here's a free post about a recent adventure we enjoyed in Switzerland where we live.

Just like last fall, our annual family vacation didn't take us to North America. Swiss people won't be allowed into the U.S. until in November, by when Colin needed to be back at school. So we used our time to visit new and / or all-time popular destinations in Switzerland.

Some days we literally drove to where the weather app said it was a nice day. That's how we ended up in Murten, in the Swiss state of Fribourg. The town's name derives from the Celtic word moriduno = lakeside fortress and was first mentioned as "Muratum" around the year 515.

What followed was a series of Dukes, Emperors and Counts claiming possession. There was a fire burning everything down in 1416, and the town that was formerly built using wood, was rebuilt in stone. 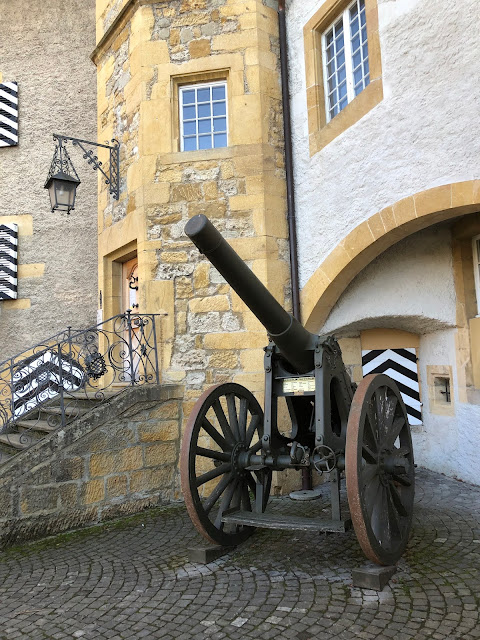 1789 the French invaded the town, and Napoleon ultimately decided to give it to the French speaking state of Fribourg, rather than German speaking Berne. 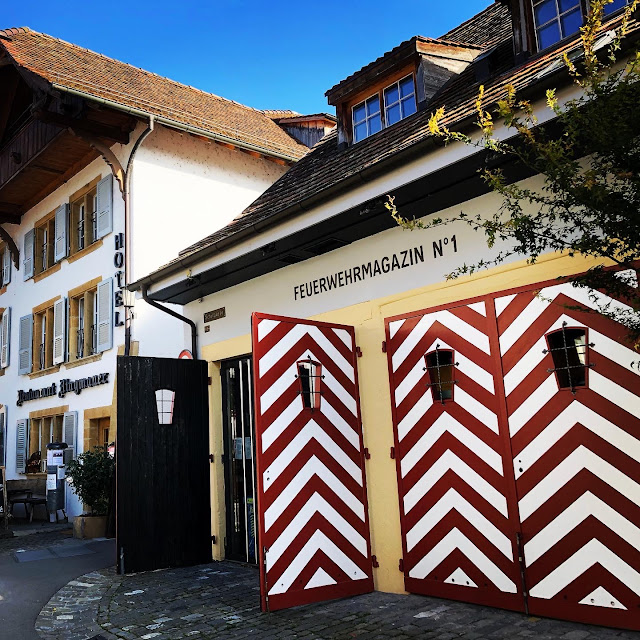 Well, it's the end of this quick history recap. Frankly I don't care who ruled this place hundreds of years ago, even though it's obviously of importance looking at architecture and culture.

Here's a personal - and politically terribly incorrect - statement: I feel in Switzerland you can tell whether you're in the French or the German speaking part. Usually you can tell by how well maintained buildings and streets are, and by the level of service quality of hospitality staff.

Earlier on that trip we stopped in Neuchâtel, another famous medieval town located in the French speaking part of Switzerland. We found that the overall experience was disappointing.

This may be a small detail, but not untypical: Almost two years into the pandemic that forced many aspects of life to go no touch and digital, in Neuchâtel you are still required to use freaking coins and to manually enter your licence plate number into a machine to park your car.

We were looking for a charming local restaurant to get some lunch. You won't believe how many places a) smelled of old frying oil as we were approaching from - and quickly receding to - the street, b) obviously went out of business without so much as leaving a note at the door c) had a a welcome committee in the form of guests smoking cigarettes on the outdoor terrace.

So maybe we caught the city on a bad day, but we often feel like they don't pay as much attention to neatness for lack of a better term.

Back to Murten though. They may be somewhat French, but they're the exception to the rule.

Everything looks well maintained and cared for! Plus their parking lots can be paid using the usual Apps!

We strolled on the walkable rampart walls and enjoyed a fantastic view, see for yourself: 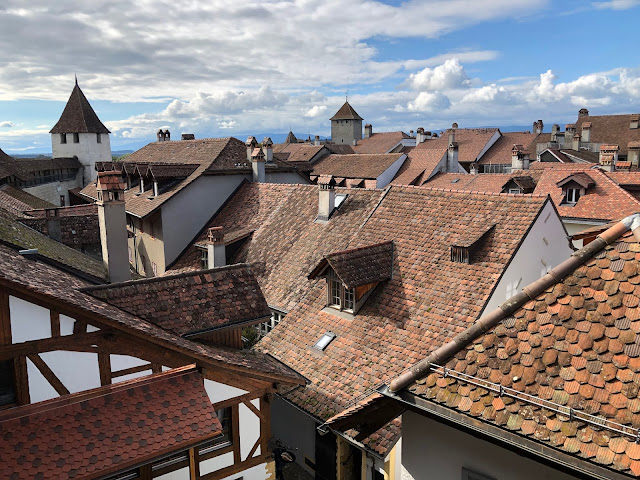 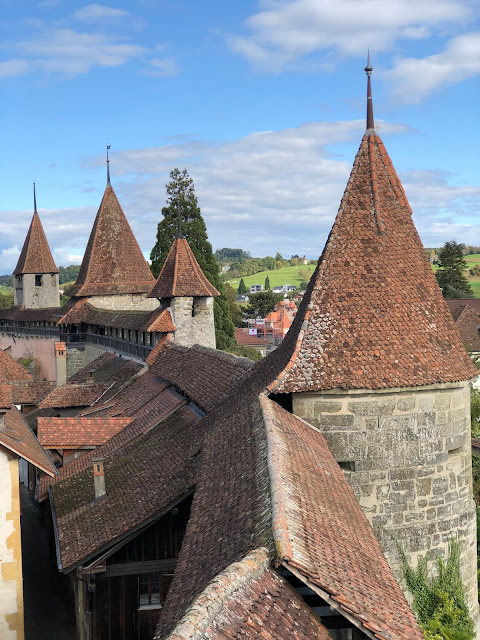 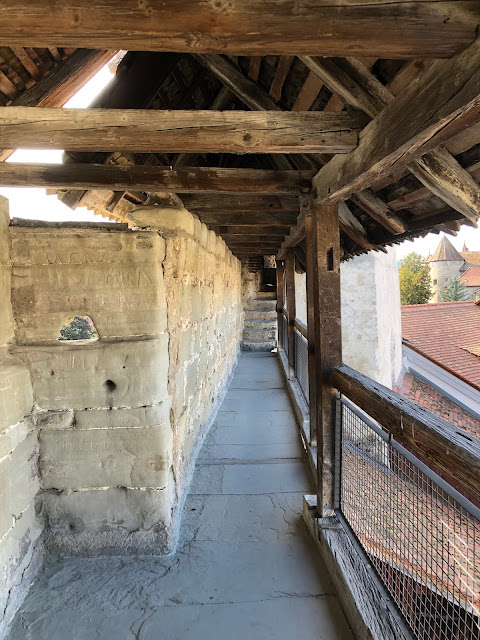 The castle tower was built in the 13th century and since the 1930s the tower has also become home for a colony of jackdaws who like their historic breeding place. 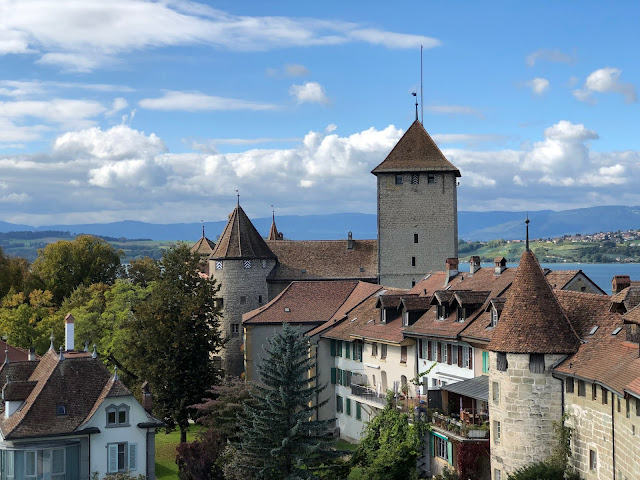 Moving on to the Old Town of Murten with its cobblestone streets and vaulted arcades. It's an absolute delight just to stroll along the Grande Rue and admire the facades of the old buildings that are in great shape. 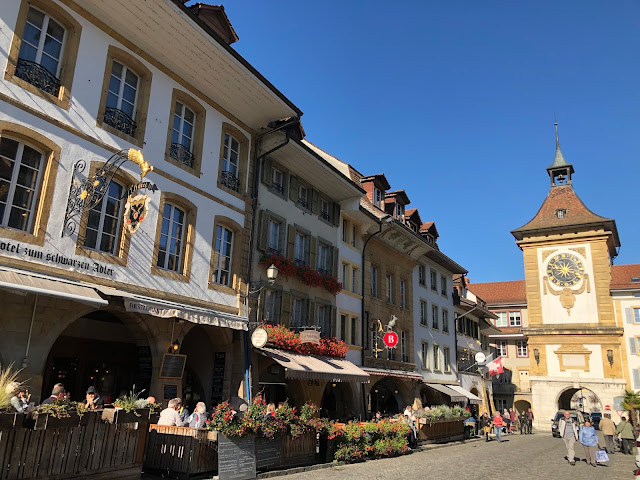 Check out the clockwork at the top of the Bern Gate, made by the Ducommun brothers in La Chaux-de-Fonds in 1712. The three weight stones - cannonballs from the Battle of Murten - have to be raised by hand every 24 hours. 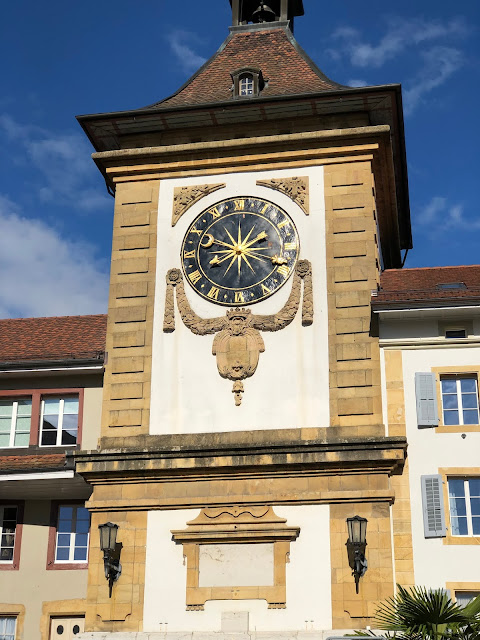 While we were able to take it slow, what many people come to Murten for is the "The Murten Run", a race that commemorates the messenger who, according to the legend of the Murten Runner, told the people of Fribourg the outcome of the Battle of Murten (1476). He is said to have collapsed after announcing the news of victory and died shortly afterwards.
Participation was reserved for men. In 1973, Marijke Moser became the first woman to take part in the Murten Run after registering under a man's name. Shortly before the finish line, men prevented her from running on. Afterwards, the organizers publicly criticized her then husband for not being able to control his wife. However, the public and the media supported Mrs Moser, and from 1977 women could officially participate in the Murtenlauf.
Just another glimpse into Switzerland's approach to women. Would you be surprised if I told you that up to 1971 Swiss women were not allowed to vote?
Shame on my country.
It is a beautiful place though. Look at this lakeside! 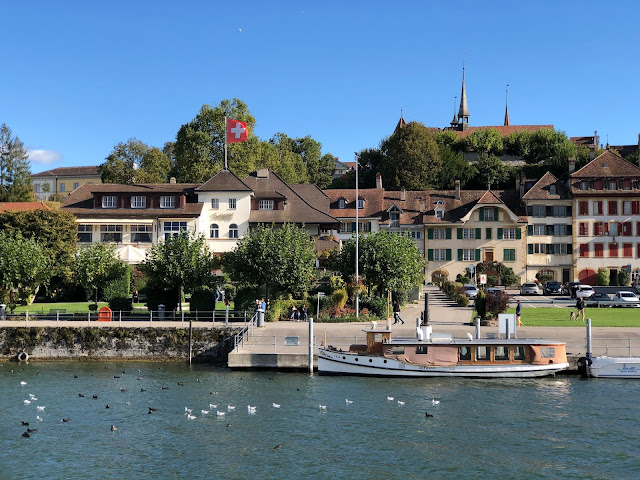 Almost 20 years ago a National Exhibition was taking place in this area. The "Expo02" consisted mainly of five exhibition sites called "Arteplage", which were built on the lake shores of the respective lakeside cities.
The largest structure in Murten was the "Monolith" by architect Jean Nouvel, a walk-in cube made of sheet steel with an edge length of 34 meters = 112 feet, inside of which two large panoramic images could be seen.
Today you can still find parts of the Expo displayed throughout the town: 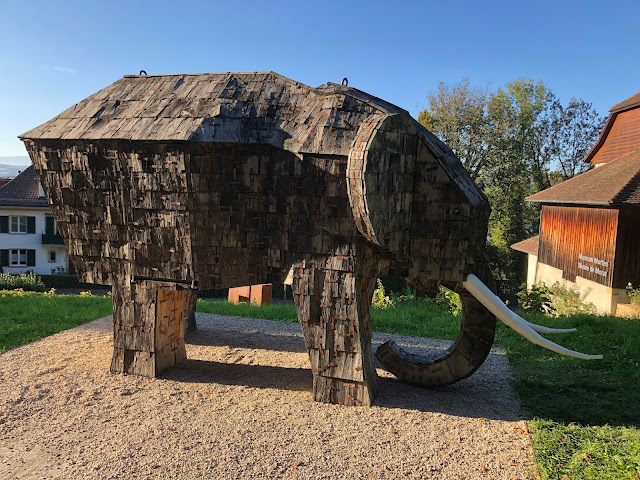 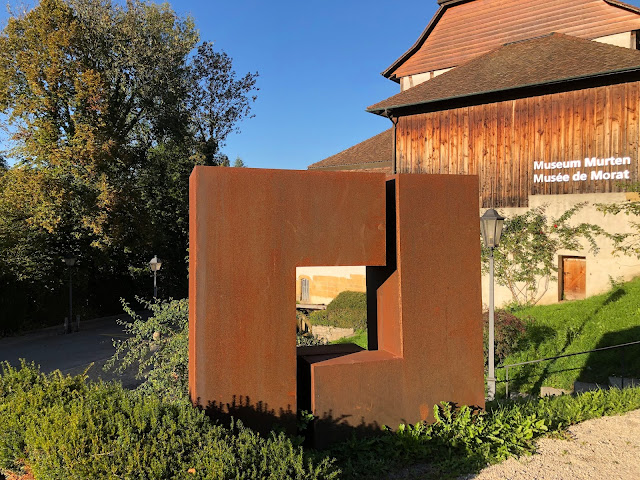 The Museum of Murten is one of the oldest museums in the canton of Fribourg. Since 1978 it has been located in the old town mill outside the town walls. The museum shows the eventful history of the picturesque building over more than five centuries.
We did not take the time to go inside but enjoyed observing the mill wheel... 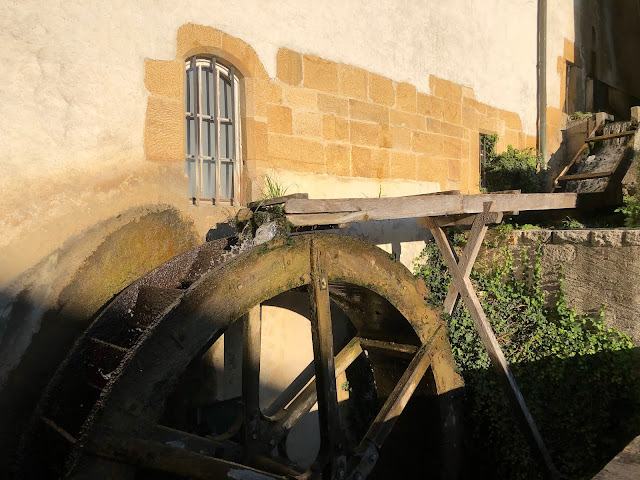 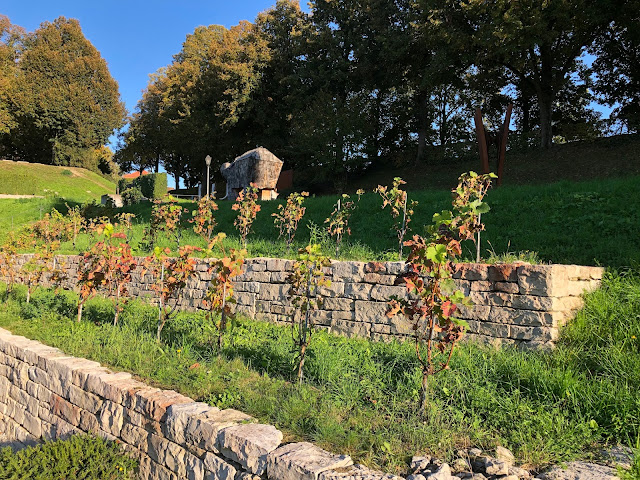 ... and sitting down at the lake to people and dog watch. 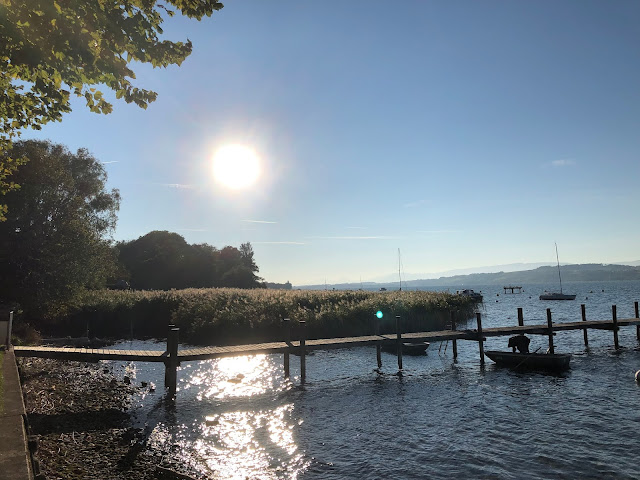 After strolling through the town and along the lake, what better way to end the day than to enjoy the local specialty, a Swiss cheese Fondue. A typical cheese blend consists in Fribourg Vacherin and Gruyères. Since it's equal parts, "half/half", this particular Fondue variety is lovingly called moitié/moitié.
We chose a restaurant that is called "Freiburger Falle", which translates as "local trap" - better than a tourist trap, right? 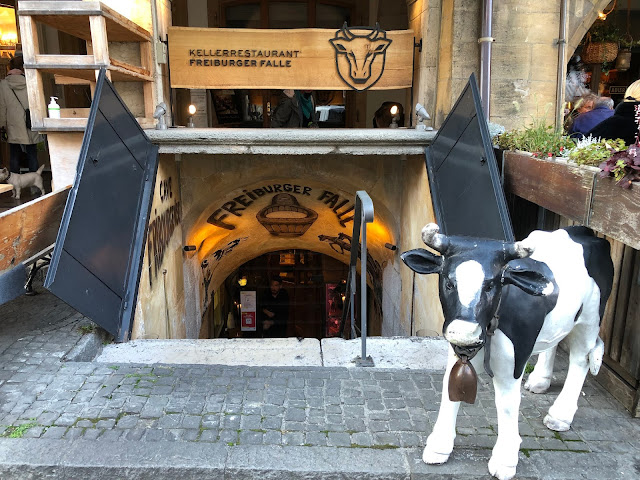 We thoroughly enjoyed our dinner in this rustic vaulted arcade location. Another guest didn't quite like the wine card.
"That's it? You don't have anything else?"
He rudely asked the waiter. I couldn't believe what I witnessed there. It's cheese fondue, Dude! You drink white wine. There's ten varieties on the menu, what more do you want? 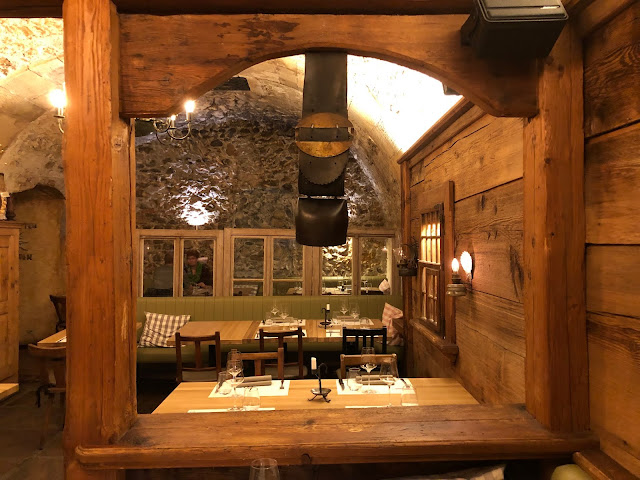 Over at our own table we discussed a handful of ways this waiter could have reacted.
My preferred suggestion was "let me check with the sommelier", only to return, a good 15 minutes later, to list a number of made-up but fancy sounding expensive wines, reserved for special guests only, and take it from there.
If the guest retracts and orders something that was on the menu in the first place, you win. If he orders a bogus wine, you serve the cheapest form the menu and let him rave about this outstandingly delicious wine he single handedly picked, you win, hahahaha!
As for me I had some wonderful Prosecco along with our Fondue. I won, 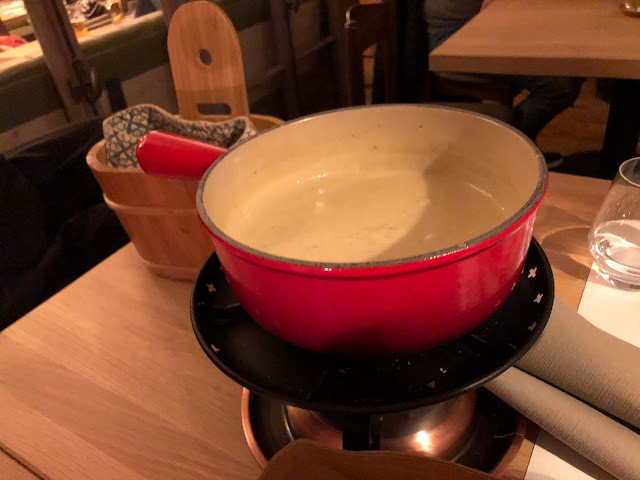 Our accommodation was lovely, too. We stayed in a spacious family room at Hotel Murten at a reasonable price.

So whether you're looking for ancient history, a charming village, a stroll at the lake - you will find something you like in Murten.

Have you heard of the town? Have you been? Would you consider visiting?