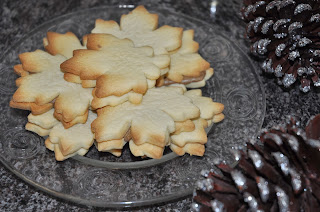 Welcome back! It's Day 3 of the Ultimate Blog Challenge, and today we're supposed to write about somebody we admire. Why is that, what qualities do they have?

I will be talking about K, the lady on the right. 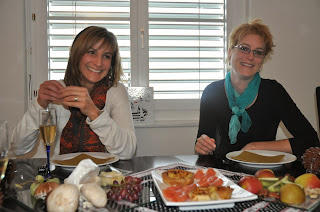 First of all, I want to tell you how this picture(s) came about.

It was my second time ever to participate in Baking in a Tornado's Secret Subject Swap.

The prompt was "You have just taken a bath in Prosecco - what was that all about?" 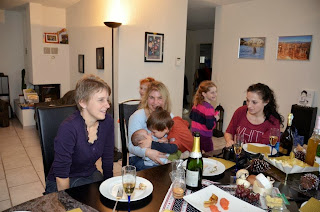 I figured I should do some research and actually taste a couple different bubblies before doing a blog post about Prosecco. And since I don't drink alone, I invited a couple of local girlfriends - and my Mom.

So, back to the topic at hand. My friend K, and what I admire about her.

She's great on so many levels, and her qualities and her hard work were recently rewarded with the election as our mayor of the municipality.

It must have been spring of 2012 when I first met her. A lady pushing a stroller came through our office door. Now as an IT firm, we mainly serve small companies, but every now and then, local people will walk in, clutching their laptops, hoping one of our techies can save their data.

She had something else she needed help with. Our large office windows, right where passengers walk by, are a popular spot for clubs and associations of all sorts to post their flyers. Concert, community event, firefighter fundraiser? We'll be happy to tape their posters to our window.

K's announcement was wonderful news for our town, and for my family as well, and I had heard rumors about it. It was about the opening of a local daycare center. We were in desperate need of it, and nobody knew better than herself. Remember - stroller?

Instead of whining about the lack of infrastructures for parents of young kids, she decided to take matters into her own hands. I don't know when she kicked off her project and how she did it. Fact was, K used her own money, rented a house, had it renovated, hired qualified caretakers, applied for a licence to run this kind of service and advertised spots for her future clients in no time.

She opened her daycare in July of 2012, and Colin joined in October. As you can tell, he gave it a thumbs up. 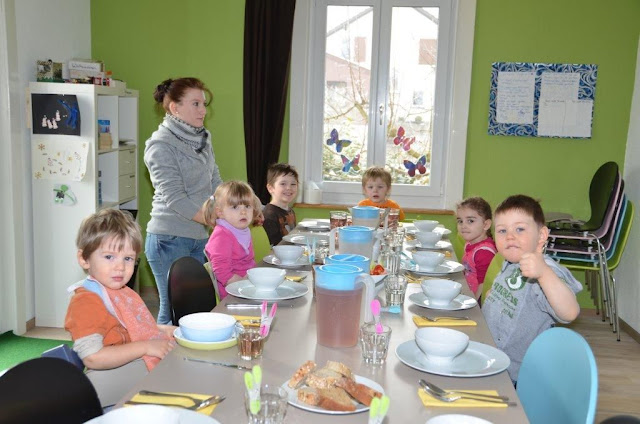 The town administration approved a one time financial contribution for the first year, but going forward, our conservative politicians felt it wasn't their responsibility to make working Moms' lives easier.

That's probably what got her thinking: what if I had a seat at that table..? A few years later she ran for municipal council, and of course she was elected.

So you can guess some of her qualities just by learning about her daycare and political career: she's determined and goal-oriented, she involves people in the processes, uses her network, communicates appropriately with her various stakeholders, and much more.

When the pandemic forced a lot of people to work from home (non-essential office folks), study from home (all the school kids) and other people to work more out there (medical staff, grocery deliveries) she talked to everyone. For me it was no problem to keep Colin at home, or to take him to the office. He was 11 years old and quite self-sufficient, as long as there was WIFI and a fridge.

She assured me I would not have to pay for that time period, and I would not lose his spot, but for now she needed the capacity to take care of the nurses and other heroes' kids.

Later she asked for our help. She had lots of hand notes about whose kids were at the daycare on what days, and in order to apply for state funds, she needed someone who was good with numbers. I'm not sure if she really meant me. I didn't mind helping, even though I was crazy busy myself, but I felt, Colin would actually be more qualified.

That's how he became her little financial assistant entering all the kids and dates into a spreadsheet that she later transferred to the state's Taskforce. She ended up getting more "hardship support" than expected, and once again, Colin created a formula to distribute some of the funds back to the parents. Good work, both of them. I made her accounting hard by donating the part I was supposed to get reimbursed, hahaha!

Anyway. I guess you're with me. K is great!

Do you have a person like her in your life? Let me know below.