Welcome back to another episode of A'lil HooHaa's Photo Blogging Challenge.

This month we have been given a free hand regarding the theme - it's Photographer's Choice -  which makes things... Easier? Harder?

I'm not sure if the term "April Weather" is a thing in your part of the world. It is in mine. It means your day is very unpredictable in terms of precipitations, sunshine and temperatures. You may leave the house, dressed for a nice day, only to get soaked an hour later. There may even be snow or thunderstorms.

But wait, isn't it supposed to be February?

Looks like these days its doesn't really matter what month it is, we're getting heavy rains, followed by blue skies. Not complaining about the latter and the sunshine though. Especially if they throw in a gorgeous rainbow like this. Made me think of St. Patrick's Day. Not long now! :-) 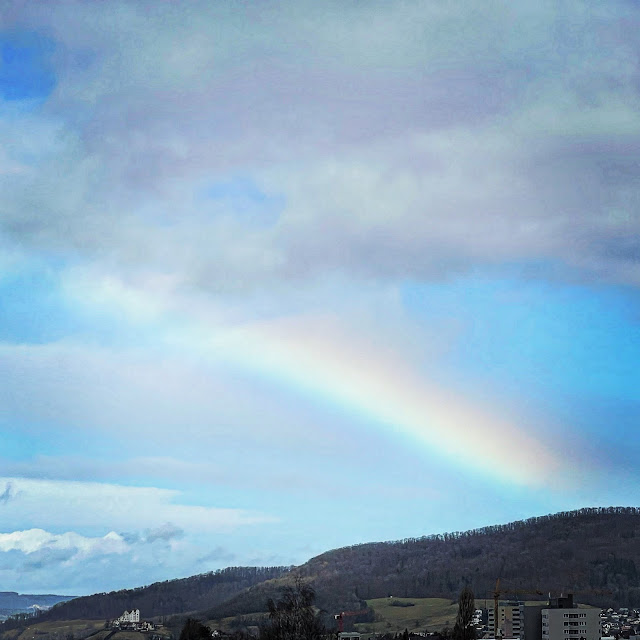 Speaking of blue sky. One Sunday we left home at 6:30am. Darkest clouds and thick fog, it was an unpleasant drive. Colin had to be at the away location at 8am, and the game began at 9:15, meaning we emerged from the mountain resort arena some time after 11:15 to this scenery! 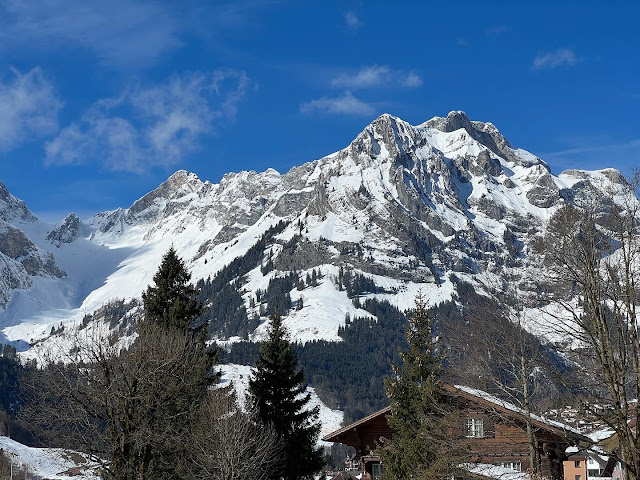 Wow!
It got even better. A fellow Hockey Mom told me to come over there, she had an announcement to make. I honestly thought my job was to document her speech as I'm always filming the games. As it turned out I was getting flowers! This lady had secretly contacted all the players'  parents to ask them for a contribution.
Why?
See, a few weeks ago, Colin tested positive for Covid, and I had to excuse him from a game, which his team ended up losing. People were upset. Colin was not the only one unable to contribute, our team's captain and top scorer was sick as well. On top I couldn't come and film the game.
The other parents were so sweet. One tried to do a YouTube stream. "I'm so sorry", this Dad texted me "it requires a minimum of 50 subscribers, which I don't have."
Another Dad tried to film the game using a GoPro, which gave an overview of the entire arena, but you couldn't see the players very well, let alone the puck.
Long story short, they realized how much time and hard work it takes not only to record a game, but to transfer two hours' worth of data, sort through it, put together the highlights, cut, pick the background music, upload, etc. So they got me this gorgeous bouquet to thank me for my effort. I was very touched. 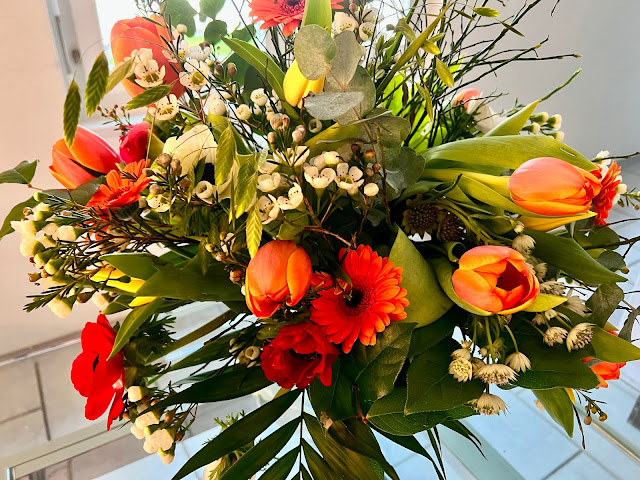 I often forget to be thankful for is the fact that we live in a peaceful and neutral country (Switzerland). Considering what is currently going on in Ukraine, it makes me shake my head. Have they not learned anything from history?
My late Granddad was born on the Crimean peninsula during the Russian Civil War, and his family fled to Austria, where he grew up, only two be forced to run from the National Socialism in the late 1930s. He arrived in what was going to become Israel, where he fought for the British Army in the Arabic Revolt. In the mid 1950s he finally got to finish his studies as an engineer, and when he got the chance to move his family to Switzerland, where BBC (no, not the British Broadcasting Corporation, the Electrical engineering group Brown Boveri, which has been sold and acquired by several companies since), offered him a job, he didn't hesitate. He was craving stability, safety and peace and quiet.
I can't even even fathom what it means to uproot yourself so many times, just to save your life. 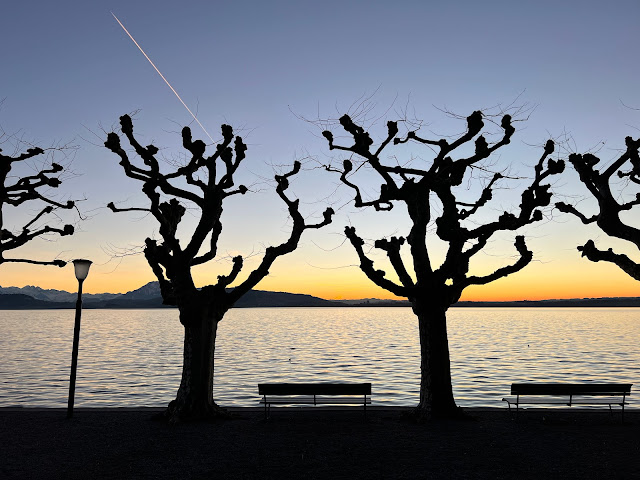 My Kindergarten and elementary school ffriend buried her Mom this month.  She was 75 years old, in great shape, very active and full of live, for the lack of a better word. Then she had a very unfortunate fall down the stairs, which caused severe head trauma, and after a couple of days in a coma, she just drifted away.
As a little girl I spent a lot of time at their house, and I always very much enjoyed it.
The lady loved her garden, always planted flowers and veggies, and at the funeral, the bereaved family asked us to plant seeds in the spring and when the flowers were going too bloom, to remember the deceased. I am not known for any kind of green thumb, but I will try my best. 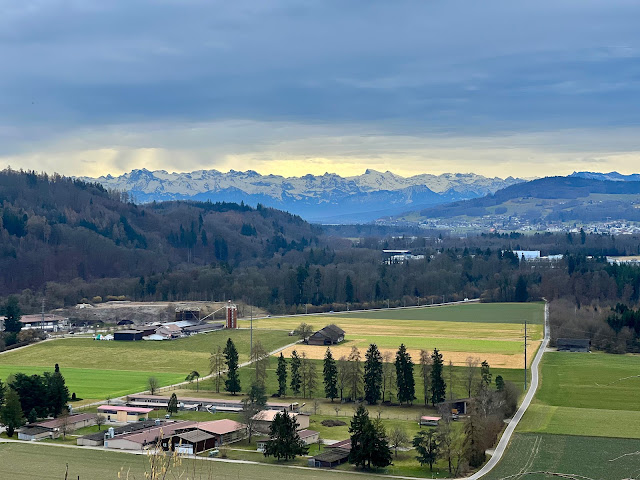 This picture was taken on the day of the funeral. The church and the cemetery are located on top of a hill, and on that particular day, we were given the treat of this rare clear view of the Alps.
On a positive note, it was nice to see my childhood friend. It's been almost ten years since we met at our elementary school reunion.
Life is precious. Sometimes we get so caught up in our hectic everyday life that we forget to breathe, look around us and appreciate all the things we tend to take for granted. I'm guilty of it, too. My schedule is always packed. Work, deadlines, household, practice, games, go-go-go!
I was actually proud of myself to find a parking space and get out of my car to take this picture of the full moon at dusk. 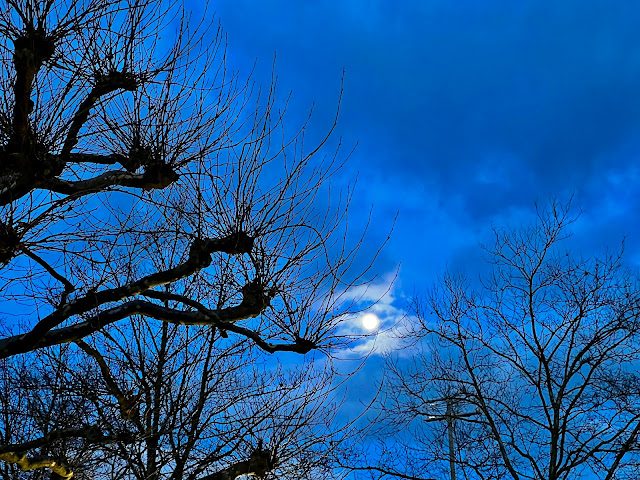