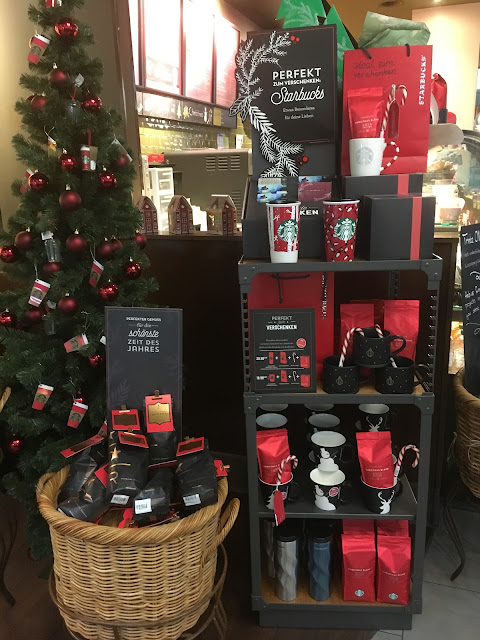 Welcome back to my coffee themed journey across the alphabet. R is for red cups.

As I mentioned in the first post of this series, the Holidays are a special time at Starbucks.

They start in late summer with the first day they serve Pumpkin Spice Latte, which last year happened on August 27, soon followed by digging out their red aprons and unpacking the red cups. 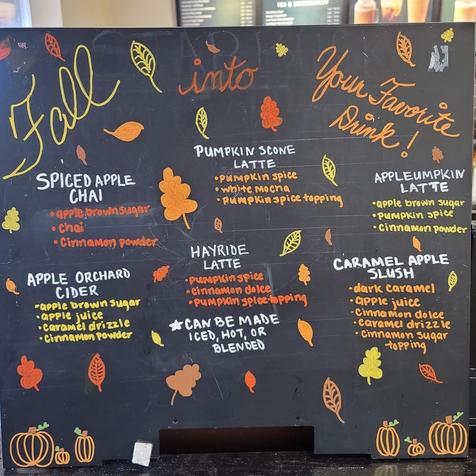 For some reason over the years, the red cups have become the subject of political / religious debates. Is it "Christmas", is it "Holidays", people seem to choose to be offended by Santa hats, reindeer and snowflakes, which prompted Starbucks to come up with a plain red cup in 2015.

You know what happened? Some people claimed that the color red is associated with Satan. Geez. Can't win. 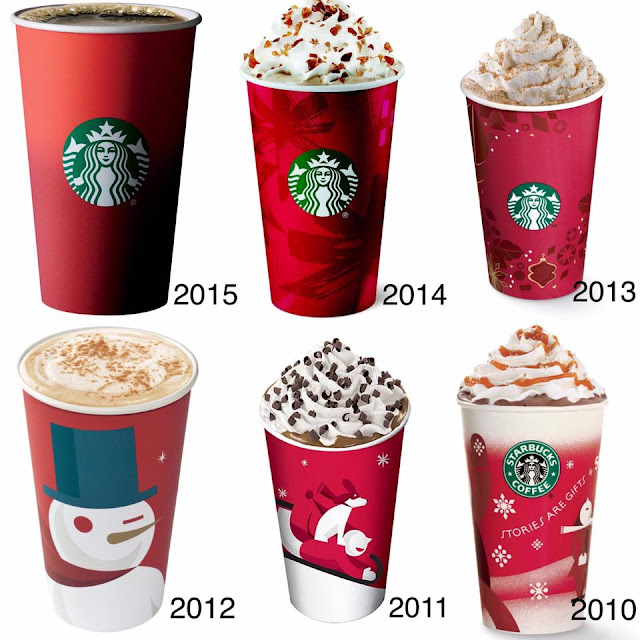 So... In 2016 SBUX asked customers to submit their own designs: 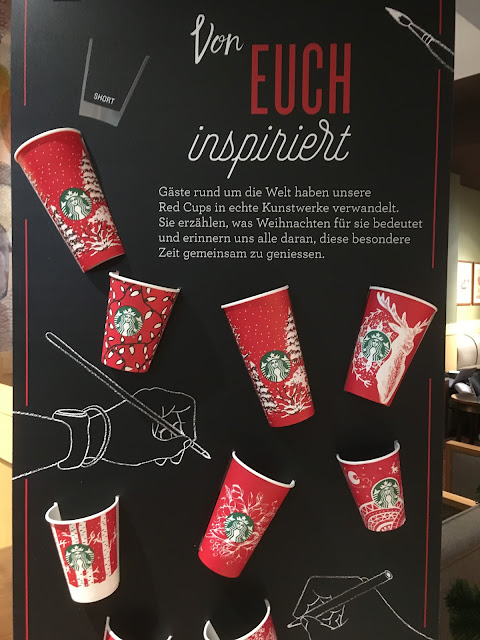 Now let's talk about the special whole bean coffee blend that is part of the magical Holiday time: Christmas Blend. It was introduced in 1984 when Starbucks only had five locations in Seattle.

I'm usually more excited about the whole beans than the red cups, but of course they both contribute to the festive atmosphere, as do the merchandise items as well as the pastry. So a few months ago I got to talking to a member of the Starbucks Facebook group I'm part of. His name is Robert, and he's the only person I know who managed to stay on until his retirement, which I think is admirable and fantastic. Below you get to read the interview he gracefully accepted to give me. Thanks again, Santa, I mean, Bob!

This is him and his lovely Elves, and I understand he even brought homemade cookies baked by 🎅🏼 Mrs Claus ❤️

What did you do (job wise) before joining Starbucks and what inspired you to become a barista? What was your training and "green bean period" like?

The bulk of my working career (nearly 30 years) was industrial sales….paper & packaging materials & equipment thru 3 different distributors…..my last job I was terminated along with a few others & one of their divisions was closed as business was slow….so I collected unemployment while paying $900/month for Cobra….I interviewed at a few places….a few I turned down….locally a new mall with a Sbux store was opening….

I knew Sbux would provide low cost medical insurance, even for PT…so I applied…. I was proud to say I was the first hire at the store. The second hire was a lady a year older who had left the company before I did.

I laughed as time went on….I could add up the ages of the three other partners on the floor & my age was still higher.

The training was difficult as I never was able to make all of the drinks….one of the shifts had me on bar & I was a wreck….thankfully he left & since I am friendly & got along well with my fellow partners & especially the customers….I found a home at the register…..early on I would be thrilled to take out the trash (I called myself a Garbista) & would clean whenever I could.

What kind of store(s) did you work for? Mall, business district, community?

In what ways was working for SBUX rewarding, are there some special highlights including sutlers or coworkers you may share?

I was in the military & received an apron stating I was in the service….when folks would thank me for my service I would tell them my job was to tell Paul Revere how many lanterns to carry as he rode thru Boston….that usually got laughs’, although many didn’t know history ….another fav line should a mother be with her teenage daughter I would remark to the daughter, thanks for bringing your sister with you today…..or if a middle aged couple would stop I would tell the lady, thanks for bringing your Dad…..one guy wasn’t too happy but the rest especially the wives enjoyed it….I have a white beard & would stop trimming it shortly after Halloween….near Christmas I would wear my red Santa hat & I would shake my sleigh bells as I would return from the back of the house…….I had a bunch of small kids who thought I WAS Santa….many Moms thanked me….I have a Santa outfit & returned to my mall handing out candy canes at different stores as well as my Sbux store….the General Manager at the mall was confused as he didn’t hire a Santa & wondered who the Santa was walking around the mall…I would also fill one of the small sample cups with whip cream calling it a Whip Cream Appetizer & hand out to small children….some Moms told me that was the reason they would return….I had 5 or 6 store managers & the one who later became a DM told me she would constantly get E-mails on a monthly basis how pleased the customers were with me….I LOVED working for the company & if I wasn’t so old I would have stayed longer…..although the month I retired my son-in-law built my wife & me an in-law quarters in Lancaster, PA…with two granddaughters now aged 4 & 7….so we moved an 1-1/2 hours away….which ended my career….I received Partner of the Quarter but what really thrilled me at my retirement party I was given a special award….”Partner of the Decade”….I was thrilled three of my former SM attended the party along with many current partners & even a customer or two.

I understand you worked there between 2007 and 2017, so your first years must have been tough considering stores were being closed and partners terminated as a result of the financial crisis. In your eyes, how was this handled, and how did it affect your store and your personal experience?

Scheduling labor has…was…and I’m sure always be an issue in an outdoor mall store….weeks are busy week days especially if poor weather was slow….so the store volume could not justify an Assistant Store Manager…..some managers would hire too many so that it was difficult to maintain the 20 hours I needed to receive medical benefits…right after the new year was especially difficult to get the needed hours…..to fill out my week I had another PT job.

(How) has the culture changes during your tenure?

I would think the different store managers had an equal effect on the culture of the store….during my tenure I never wanted to go beyond a barista…..if I was younger I am sure I would aspire for advancement if not on the store level maybe at a roasting/corporate position.

Working until your retirement must have been tough physically and probably mentally, too. What helped you cope? Would you recommend this journey to a younger friend? Would you do anything differently?

The short shifts….I would open at 7am to 1pm (if business justified) helped….I would nap when I got home….what was especially helpful the last two or three SM would not ask me to do a lot of bending like cleaning the drains….although from the beginning I would break down our weekly truck orders on Wednesday, which was gruelling….but I sucked it up.

What's your favourite whole bean variety and why?

My favorite whole bean is Tribute….a three region mix which I haven’t seen for a few year….2nd fav Casi Cielo followed by Verona….other than Blonde (too weak), French & Italian  roasts (too strong)….I can drink all the roast….before Sbux I thought Dunkin Donuts was the best….but not no more….My day is started with a simple pour over. The fact that the coffee is free makes it even better. When Verismo first came out I purchased one and used the pods as my market. Sadly the pods are no longer available. at the various stores I visit.

All in all… a good experience?

Starbucks was a good fit for me…..offering medical & 401K/Roth & company stock is why I decided to work there….the lifetime markout after 10 years of service & over 55 YO is why I stayed the last 2 years….during my time I was proud & still to this day of the company & I purchased thru their website clothing & additional items….I can honesty state with the various companies I worked for a few were large corporations, I hardly wore their company stuff let alone buy their monogramed stuff. 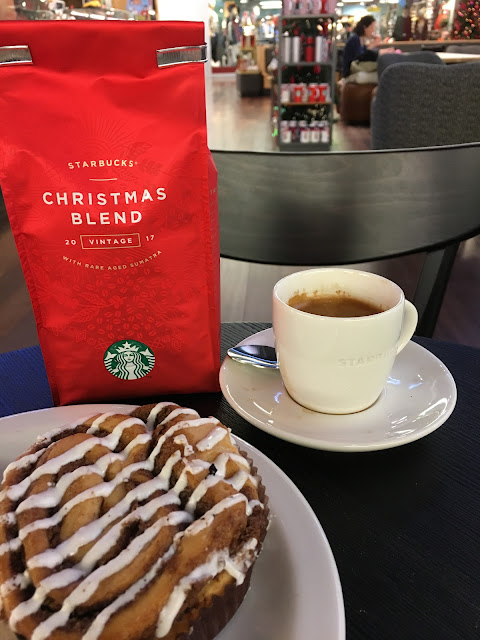 I love Bob's answers. They represent everything I've been telling you in this blog series. And more! Isn't it more relevant to hear these statements from somebody who experienced it first-hand?

So do you have more questions?

Are you a Holiday person?

Less than 250 days till Christmas - that's what the online countdown says.