Welcome back... Almost there!

You may wonder why today's post for my coffee themed series is called YMCA. Well, they typically have coffee at the YMCA, right? If not a sit-down coffeeshop, then at the very least a vending machine.

Did you know that even though the YMCA was founded by George Williams in London, England, its HQs - just like many international organizations' - are based in Geneva, Switzerland? It was Henry Dunant's initiative. Yes, the very guy who proceeded to found the ICRC (Red Cross) and ended up winning the first Nobel Peace Prize. Proud of my fellow Swiss.

However, this post is not about the youth organization - it's about the song by the Village People.

Again, what does it have to do with coffee?

I am fuzzy on the details, but at some point, probably some 20 years ago, the Starbucks executives, among them Howard Schultz, performed this song at a gathering, either a leadership conference or a Holiday party. They dressed up accordingly and they - and of course the audience - had so much fun that it was repeated on several other occasions.

I never had the pleasure to attend one of these events in person, but at some point our market's CEO shared some video footage.

It was great to witness that our company's big shots were able to let their hair down and be silly.

Not that they were very formal on any normal work day, but they were still deciding over a lot of people, stores and money.

Apparently they even got cocky and performed another song at a later conference: it was by the rock band KISS!

Here's a story I heard about one of these wonderful executives, and I wish I could remember whether it was Orin or Howard, Howard being Howard Behar, so let me first introduce both of them, and I'll start by pointing out that the three of them (add Howard Schultz to the gang) were called H2O, not for the element water but for the fact that their first names started with H for two guys and O for the third one. They were very different personalities but complemented each other in a great way, and they were friends beyond work.

Howard Behar started working at Starbucks in 1989 when the company had just begun to venture outside the American northwest region. Initially serving as vice president of sales and operations, he grew the retail business from 28 stores to more than 400 by the time he was named president of Starbucks Coffee International in 1995. Under Behar’s leadership, Starbucks opened its first location in Tokyo in 1996. Following this historic opening, over the next three years he introduced the Starbucks brand across Asia and the United Kingdom. After a two-year hiatus, he returned to Starbucks as President of Starbucks North America until his retirement in March 2007. Behar is the author of It's Not About The Coffee: Leadership Principles from a Life at Starbucks. 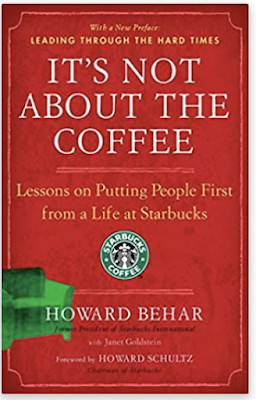 Orin C. Smith (June 26, 1942 – March 1, 2018) was an American businessman who served as president and  CEO of Starbucks Corporation from 2000 to 2005. Previously he was working as the chief financial officer, and he is said to have always looked for ways to say yes, unlike those typically in that position. Orin was widely known for being a careful listener and decision maker and for a work style so methodical and deliberate his peers and employees teasingly called him “the tortoise.”  He sadly passed away four years ago of pancreatic cancer.

So one fine day, one of them was interviewing Jim, a candidate who was, many years later, going to be "my" CFO for a while. Apparently they met at location A, and Howard/Orin had to be at location B later that day. He invited Jim to join him for a couple of store visits on their way. Jim happily accepted and used the time to talk a lot, highlighting his career successes and how he intended to implement his experience into the Starbucks world.
Jim ended up being hired, and he asked "so did you like the ideas I was talking to you about?"
Howard/Orin replied "Gosh, you sure were talking a mile, and I have to admit that I may have opted out at a certain point. I loved, however, that you kept picking up snippets of the straw wrappers that were lying around."

Hahahahaha! I can tell you though that Jim had more good qualities justifying his engagement.

Back to the music.

In 1999 Starbucks acquired "Hear Music", which was a company running five CD stores.

The five stores that began as CD stores (more "hear Music" concept Starbucks stores were about to follow) were remodelled to include a Starbucks coffee bar, and customers could choose music titles and burn their own CDs using these music media bars.

In 2007 Starbucks and Concord Music Group launched a joint venture that represented musical icons such as Paul McCartney, James Taylor and Joni Mitchell. Soon after, however, the Hear Music stores were shut down, respectively dismantled to be regular coffee houses.

In the same year Starbucks and Apple announced a partnership enabling customers to wirelessly browse, search for and download music from the  iTunes Store onto their Apple device.

Music has always played an important role for the cozy atmosphere in the Starbucks stores, even though I don't particularly share Howard Schultz's love for Jazz. Here's a link to SBUX's Spotify profile in case you want to recreate these vibes at your home.

When Carl, my beloved CEO, left our market in summer 2005, I put together a music collection for him that included titles that represented our Starbucks experience. Our being the Swiss/Austiran management team, the store managers, even some store partners contributed.

The compilation we gave him as a parting gift ended up being amazing: diverse and powerful just like the people that dedicated these songs!

My contribution was "Clocks" by Coldplay. It was on a Hear Music CD when I first started with Starbucks. Living 52 km (32 miles) away from the office, along the most congested route across Switzerland, I spent a lot of time in my car listening to that soundtrack, so it was only fitting to share it with Carl.

Does the type of music being played in a restaurant, retail store or coffee shop influence your mood?

Do you have song you connect to a job / employer?