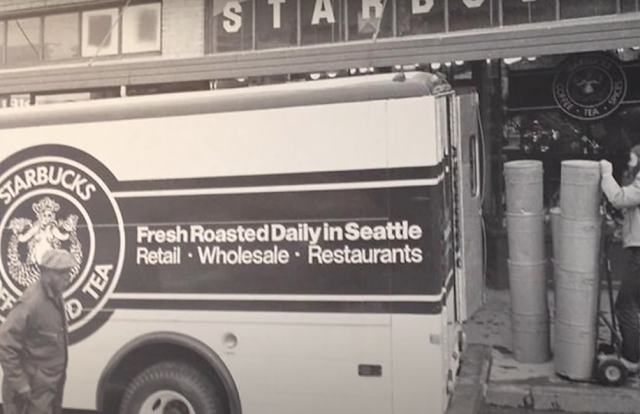 Welcome back - we have arrived at the finish line! Z is for Zev.

Once upon a time there were three friends, Gordon Bowker, Jerry Baldwin and Zev Siegl. Gordon and Jerry met at University of San Francisco, where they were roommates.

Zev had a summer job at Seattle's Century 21 World's Fair, where he posted on the bulletin board that he was looking for passengers for his drive to NYC, and coincidence had it that Gordon needed a ride as he was planning a trip to Europe that departed from New York. On their way they picked up Jerry, and that was the beginning of a wonderful friendship.

What happened after they graduated?

Zev, became a history teacher, and later he was the first paid Starbucks employee, while the other two kept their day job. More about that in a minute. After a good ten years he left a well oiled machine, six Starbucks stores and a wholesale business. He went into business development and mentoring.

Jerry was a winegrower and used to work for Peet's Coffee where he learned everything about coffee.  He must be in his late 70s or early 80s now, and I say he needs to add the chocolate experience to his portfolio ;-)

Gordon went on to become a writer, contributing to Seattle Magazine. Later he funded an advertising agency, as well as the Seattle Weekly, in which he published restaurant and hospitality reviews.

Gordon really, really loved his coffee, and he wasn't happy about the quality that was available in the U.S. back then. He would regular take a trip to Vancouver, Canada, where he would purchase a bunch of bags of good coffee. His friends were into it as well, so he had to buy more on every trip he took. 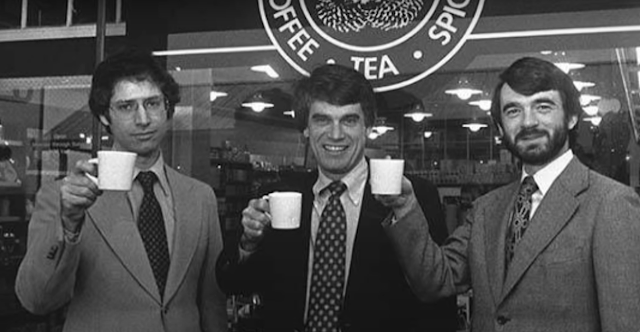 As I was saying, the guys liked good coffee, so they opened a little store in Seattle. Its was called Starbucks Coffee, Tea & Spice Company. They purchased their beans from Alfred Peet's Coffee & Tea in Berkely, CA.

Peet's was a successful coffee chain already back then, and Alfred Peet served as a mentor to the three friends.

When I say "store" it's far from what you know is a coffee shop today. They roasted and sold whole beans and didn't make any beverages back then.

In 1984 the Starbucks guys would purchase Peet's. In 1987 Gordon left the company, and Jerry decided he'd be happier running Peet's so he proceeded to sell the six locations and his Starbucks shares for 4 million dollars to Howard Schultz and a group of investors.

Hold on - how did Howard get into the picture? He was a salesman for their supplier Hammarplast, a Swedish houseware and kitchen equipment company.

Howard noticed how large Starbucks' orders for drip-coffee makers were, and he decided to find out more about that Seattle company. He paid them a visit and was impressed by the coffee quality. He wanted to work for them, and a year later that's what he did.

As I mentioned in the post dedicated to Howard Schultz and Pike Place, he wanted to serve coffee beverages, but his colleagues didn't think so, that's why in 1986 Howard moved on and founded his own coffee company, called "il Giornale", Italian for newspaper.

He did so with his colleagues' blessings, and not only that, the original Starbucks guys invested time (Gordon Bowker  devoted half the working time for il Giornale's first business year) and money into the new company, plus they delivered the coffee beans.

However, Gordon now had Starbucks, il Giornale plus a handful of other projects on his plate, and he had to get real and channel his time and energy. That's when he decided to sell his Starbucks shares and dedicate his resources to Peet's.

So Starbucks was for sale, so to speak.

Reading this today makes it look so easy. Howard Schultz wanted Starbucks, he needed 4 million dollars, he got the money, he purchased the company, the rest is history.

Back then Howard was a regular guy getting up every morning, working hard to provide for his family, just like the rest of us. 4 million was a lot of money for him, just like it would be for us.

He had to knock on many doors and accept many rejections until finally he had enough investors  to make it happen.

I believe this is how Howard Schultz met Christine Day.

I know, I know - I keep adding new characters. Brace yourself, there's gonna be another guy in a minute.

Christine used to work for a private equity firm and just had a baby. Her attitude and drive must have impressed Howard, because he convinced her to come work for him at il Giornale. They needed an Office Manager.

Christine was surprised when she met Dave Olsen, his business partner, instead of Howard on her first day at work. If she expected some typing, filing or answering the phone, she was in for another surprise.

Dave showed her in detail how to operate the espresso machine.

A word about Dave Olson. I had the honor to meet him in his position as Senior Vice President of Culture and Leadership Development. He started out as Starbuck's green bean buyer in 1987, traveling to coffee producing countries like Kenya, Guatemala and Indonesia, and he quickly realized that his calling went beyond sourcing high quality beans to be roasted, ground and brewed. He wanted to make sure that just as much attention was paid to  the environment and the people in the coffee growing regions.

So I'm pretty sure, during his entire training session, he didn't stop talking about coffee, its origin, its quality, you get the picture.

When he was done, he told Christine to take care of payroll, which was overdue, people expected to get paid now. Of course she had never issued a pay check in her life.

Christine put on her big girl pants and made it happen. I can see why Howard was so impressed by her. A good 20 years later, I had the pleasure of meeting Christine at a leadership conference. We sat next to each other in the minivan for a number of store visits, and she told me about the olden days.

As I was saying, she was hired to run the administration, and she did. But more often than not she had to prepare sandwiches, deliver coffee to neighboring businesses and other operational stuff. Well, her great commitment and exemplary work ethic paid off: by the time we met, she ran Starbucks' Asian/Pacific market.

I can relate to Christine's journey. Mine was similar, only it didn't take me to Hong Kong where I believe the Asian/Pacific HQs are, but that's more than OK.

So you got to know a handful of important people who created the foundation of what we have today.

This concludes this year's Blogging from A - Z Challenge, as well as April's Ultimate Blogging Challenge. I hope you had as much fun as I did. Thank you so much for having coffee with me as many times as 26!