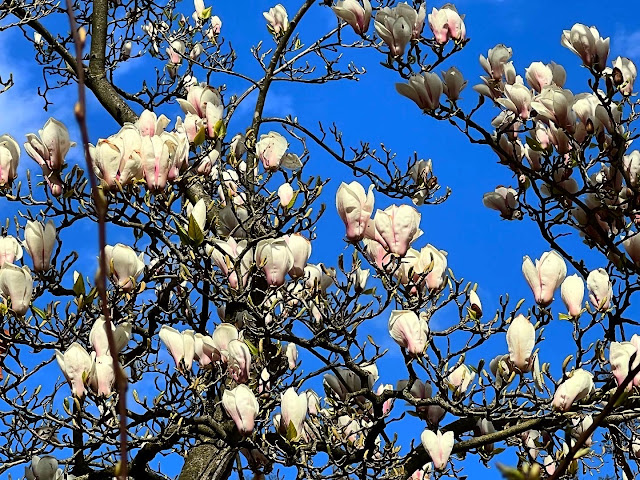 Wrapping up the month of April - what better theme could there be for A'lil Hoohaa's monthly photo blogging challenge than to "Enjoy Life"?

I've been benefitting from that one month with no practice whatsoever for Colin (his last ice hockey game took place March 26, and the first day of summer training will be May 3rd) to participate in another round of Blogging from A - Z.

This year my overall theme was ☕️ coffee, and if you're interested, check out some of the posts here.

During two of the four weeks Colin was off school for spring break, so on the days I didn't have to work, we ventured out.

Now if I was to ask him "would you like to go to the park and look at magnolia trees?" he'd roll his eyes and say no.

That's why I'd rather suggest lunch at a 🍔 burger or 🍣 sushi restaurant and mention there's a couple 📸  pictures I need to take for my challenge. It's not far from where we parked the car ;-) 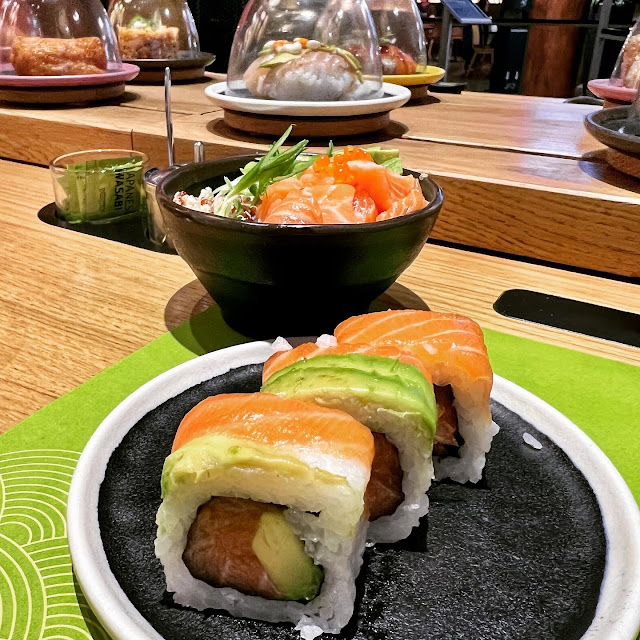 So with both of us being fed (and me ☕️ caffeinated) he accompanied me good-naturedly to tour some of the lovely fountains ⛲️ decorated with roses 🌹 across the city of Zurich. This is an initiative of the Reformed Church ⛪️ to celebrate the life that is allowed to bloom 🌸 anew this spring like roses from thorns.

For Easter we had a little fun with our egg dyeing. While other people like to apply shaving cream and food colouring, and others soak their eggs in natural extracts containing stinging nettles, beetroot or cabbage leaves, we didn't mind as much what the dye was made from, but how we were able to imitate hockey players' jersey numbers.
As I'm going to explain in the last chapter, our team, the Zug Bulls (blue eggs) made it to the playoff finals. They're playing agains the Zurich Lions (red eggs), a rich team, spoiled for success for many years. Since their foundation they won the Swiss Championship nine times, as opposed to the two times our team managed to do so.
Their fans always like to blame the referees when their team loses, so we made a "ref egg" as well, hahahah! 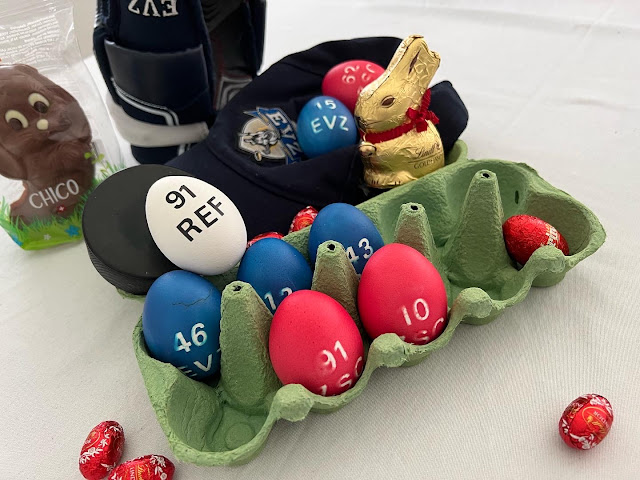 So on Easter Sunday it's customary to enjoy brunch consisting in Zopf bread, eggs and chocolate bunnies and / or chocolate eggs. We don't just crack our eggs and eat them, we have a little contest. It's called 🥚 "Eiertütschen" 🥚, probably best translated as egg tipping?
Two players each take a hard-boiled 🐣 Easter egg in their hands. One player starts and hits the tip of his egg on the tip of his opponent's egg, with the intention of breaking the latter's shell. In the family, Easter egg tipping is played around the table on Easter morning. The winner is the one whose egg is the only one still intact at the end.
Of course we were hoping for the blue eggs to crush the red ones. Well, sometimes they did, other times they didn't ;-)
My best friend's 🎉 birthday is on April 24. That's why it probably pops up every year in the April episode of this photo challenge. In 2020 we celebrated via Zoom, last year we met on her balcony, and hooray, this year, indoor parties are allowed to take place with as many people as you like, so she invited her entire family and friends crowd. I volunteered to make a 🎂 cake, and look how lovely it turned out with the cheerful letter candles I found! 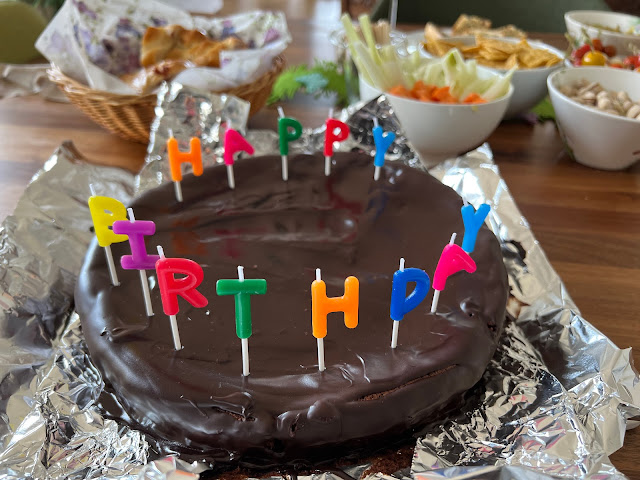 I may be the Mom who wants to go and look at blooms and flowers, which can be annoying if you're a 13.5 yo boy. Then again I'm also the Mom who will sit at her computer at 10am sharp because that's when the presale for tickets starts. Here's the deal:
Our hockey team made it to the playoff finals. Since Colin is part of their junior division, he has access to the arena's standing room all season long. Now the seats are pretty much being sold to annual pass holders, for which there is a waiting list, meaning it's nearly impossible to just purchase a single admission.
Whenever Colin wants to attend a game, I have to hustle and ask around among our friends if maybe somebody can't go and is willing to sell their ticket.
Guess what, during playoffs, especially now in the best of seven series of the finals, everybody wants to go, so you depend on the official market place where unknown people who can't make it or hope to make a profit from reselling their access, post their seats.
That's what I have been doing at 10am as of lately. Press F5 and pray the system allows access to the waiting room as they call it. As soon as you're finally in, you have to click fast. There's usually less than a handful of seats available, and if you're too slow, you'll read "We are sorry, this seat is already taken." Game 5 was sold out within 8 minutes; game 7 only took 5 minutes. (Venues alternate between games, so games 1,3,5, and 7 take place at our arena, games 2, 4 and 6 were away games in Zurich.
Long story short, I was lucky enough to score a ticket for 3 out of 4 home games. Game 7 is about to take place tomorrow (May 1st), so you'll have to wait for an entire month to find out if we won. Or you may just follow me on social media, and you'll know in real time how things unfold ;-)
Wish us luck! 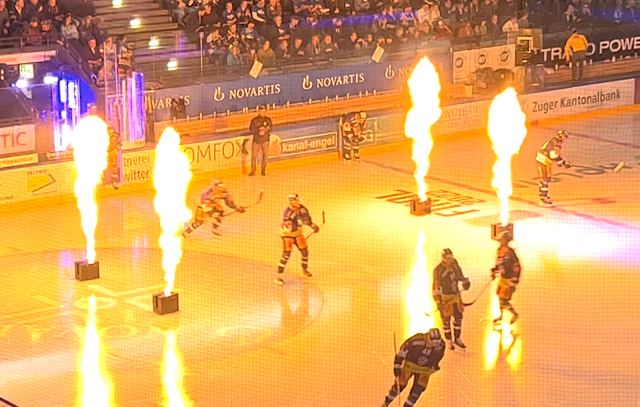 Now please have a look at what my fellow bloggers came up with.