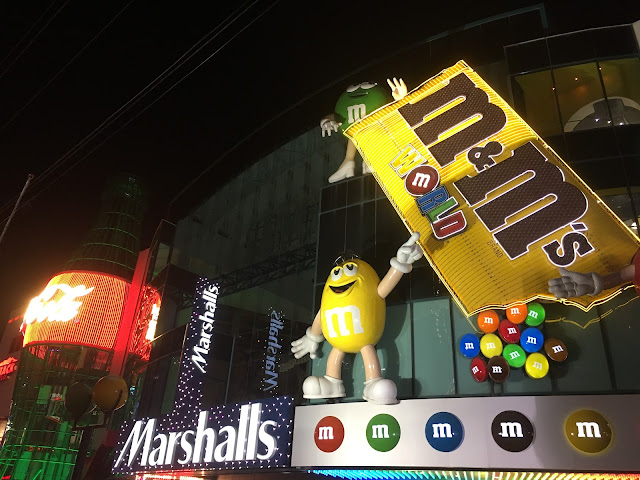 Again five brave bloggers picked a secret subject for someone else and were assigned a secret subject to interpret in their own style. Today we are all simultaneously divulging our topics and submitting our posts.
Here are links to all the sites now featuring Secret Subject Swap posts.

Who do you remember on Memorial Day?

It was submitted by: The Diary of an Alzheimer Caregiver - thank you, Rena!
Let me start by saying that Memorial Day is not observed in Switzerland.
As a neutral country we don't even have any holiday dedicated to honor and remember the military personnel who died in the line of duty. That's because we don't have any, or barely any.
What's more, since in Europe we celebrate Labor Day in May, I've been confused about these holidays in the past.
When I was living in the U.S. in 2001, I quickly learned the following: for many purposes, summer season basically starts on Memorial Day weekend and ends with Labor Day weekend. I think back in the days when San Diego SeaWorld was still allowed to do nightly fireworks, they would observe this schedule.
My first memorable Memorial Day goes back even further.
It was in 1997, upon my first visit. Two Swiss friends of mine were attending UCSD's language classes for six months. They were friends with other Swiss students plus some kids from Brazil and Japan, and there were BBQs, pool parties, trips to the mall and other activities going on all the time.
"How long are you here for", somebody asked me one day. I told them my departure date.
"Great - you get to come with us!"
Come where?
"To Las Vegas! Memorial Day Weekend, we leave Saturday morning and come back Monday night. George is driving!"
George was the only one older than 25, and thus, eligible to rent and drive a van without any problems or additional costs.
All-righty then! I was excited! 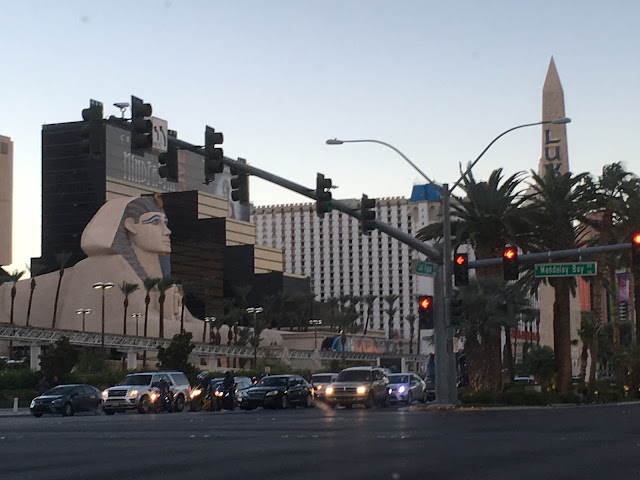 Unfortunately some of the kids were younger than 21, and they didn't stand a chance of even entering a casino, even if they swore they wouldn't gamble or drink.
To us as Swiss this seemed strange, as our own protective age ends at 18. 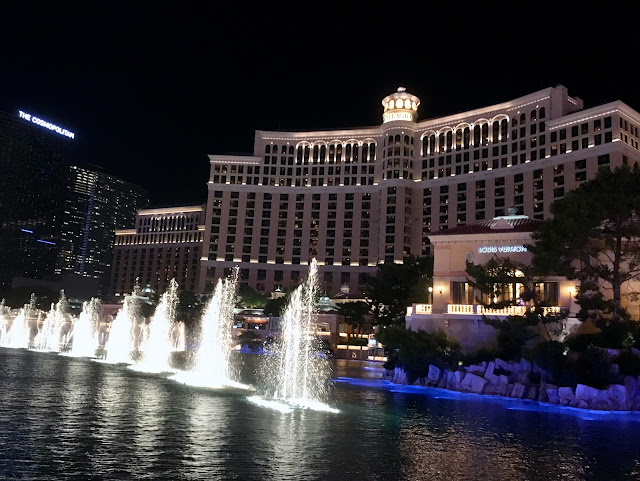 So our evening outings as a group were pretty much limited to looking at the hotels from the outside (which was fantastic enough!) and - for budgetary reasons - eating at McD's ;-)
My friends and I went to a couple of casinos on our own, but frankly, the fact that people were allowed to smoke, didn't keep us there for long. We all had chips for 20 dollars, and after winning some and losing all of it, we called it a night. 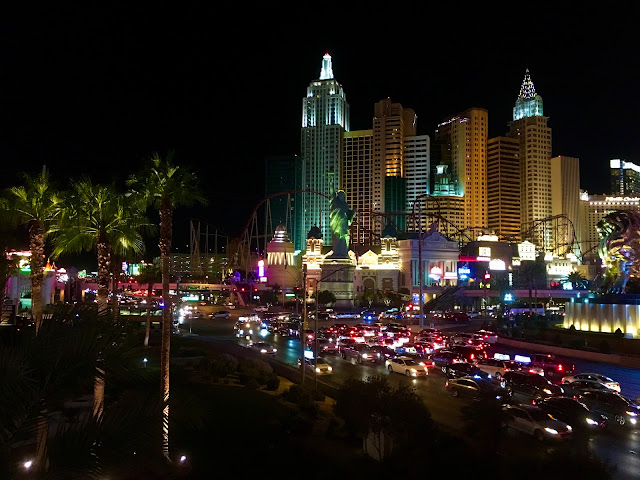 At an ice cream cart at NYNY I had my first ever mint / chocolate chips ice cream.
An additional highlights on our way back was the stop at the outlet stores in Bakersfield I believe it was. Jeans, accessories, sneakers for reasonable prices! The girls among the group were in heaven, and the guys were decently patient about it.
Disclaimer: the pictures in this post were taken almost 20 years later. Back when I first visited, the NYNY was brand new, but other hotels like Bellagio, Manadaly Bay, The Venetian, or Paris were not even built yet.
Before I wrap up this post, let me try and come back to Rena's original question: I may not personally know a soul to honour on Memorial Day, but friends of mine have relatives who served.
There's one thing, however, I'll always, always do when I'm in San Diego:
I'll visit Mount Soledad, National Veterans Memorial. 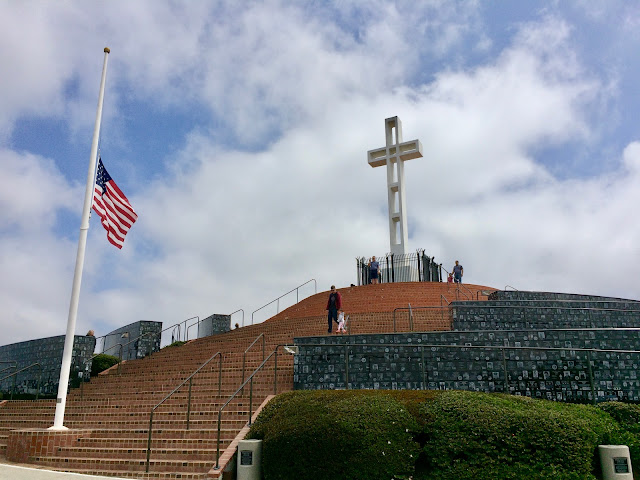 It's where I went to get away from it all.
Like on 9/11. Everything was being canceled and closed down, I was scared and alone. I went to Mt Soledad and tried to breathe. On my way there I remember listening to Lee Greenwood's "God bless America" about a dozen times. When this or other patriotic songs weren't played on the radio, they made appeals for people to go to the fire stations to donate blood.

Driving up there on 9/11 I felt like an imposter. I didn't belong there. I wasn't an American. I didn't serve, I didn't know anybody who was working at or visiting the World Trade Center.
Correction: at the time I thought I didn't know anyone. As it was going to turn out upon my returning to Switzerland, a girl from my village had a job in one of the neighbour buildings. She and her teammates ran out of there in their high heels. Her boss who caught up with them, dragged them into a shoe store. "Let me purchase sneakers for you ladies, this is no time for pretty shoes, you need to be able to move faster, let's go!"
Back to my feeling as if I was intruding the inner circle on Mt Soledad: The only people besides me was a couple walking their dog. We exchanged a few words, and then I was on my own.
I was grateful and terrified at the same time, knowing about the United States' position of power. Whatever they were going to do was going to affect pretty much the whole world. The media was making us believe that there was a strike back within no time. A buiding in Afghanistan was on fire. As it later turned out, this had happened days before and had nothing whatsoever to do with the planes crashing into the WTC.
On a more personal note, I was worried about myself. Me, the little girl from neutral Switzerland, found herself at the verge of a world war in a foreign country. What was I gonna do? I had some savings I was prepared to spend as long as my work visa didn't come through, but how long was this gonna take? Was the job still mine at all? I had less than a handful local friends beyond superficial acquaintances. Were they going to be there for me? How long till things were going to be back to normal? 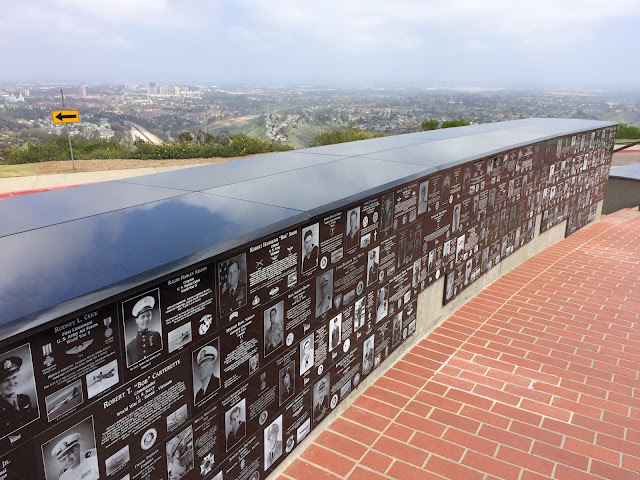 I will never forget this time. I was grateful to be there, and at the same time anxious to get home (which I was able to do less than a week later) at the same time.
And ever since, I would always come back. Back to the U.S., back to San Diego, back to Mount Soledad.
Not sure if I manage to convince hubby to take the plunge this fall. We'll see what time / the virological situation brings.
Interesting to find myself asking the same question today:
How long till things were going to be back to normal?
Do you have the answer? Let me know, and don't forget to visit my fellow bloggers' posts!
9/11 God bless America Labor Day Las Vegas long weekend Memorial Day Mount Soledad San Diego Secret Subject Swap