N is for Nashville

Last week we had a blast in Florida, today we're moving on to Nashville, Tennessee.

Yes, I made up my mind, at first I was gonna pick Niagara Falls, but then I was like "what can I possibly write? It's a bunch of water rushing down, sometimes you can see a rainbow, and at night they're using colorful spotlights", that's about it. So Nashville aka Smashville it is.

We passed through on your road trip from Houston, Texas all the way to Chicago, Illinois in June 2013, the summer before Colin started Kindergarten, our last chance to travel outside school breaks.

Usually we don't prepare much. We have some destinations on our list that we want to visit, and for Tennessee our expectation - well, first and foremost the young man's - was to see Bridgestone Arena, home of the Nashville Predators. 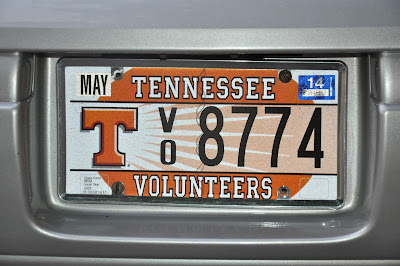 We arrived one late afternoon from Memphis - about which I will be talking later on in this post - and I immediately liked Nashville. It had a very charming and lively vibe. 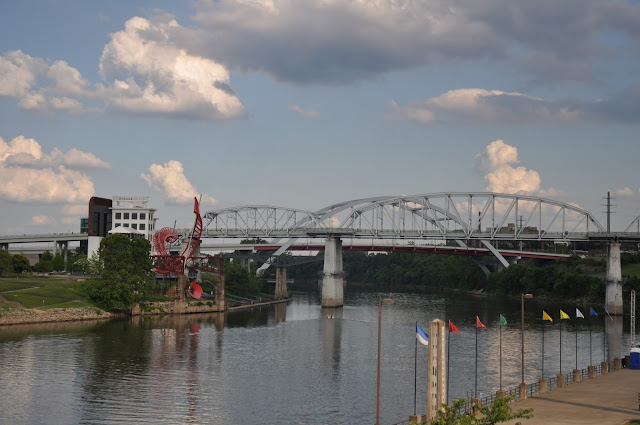 The traditional and the modern seemed to go hand in hand, be it for buildings, vehicles or people. 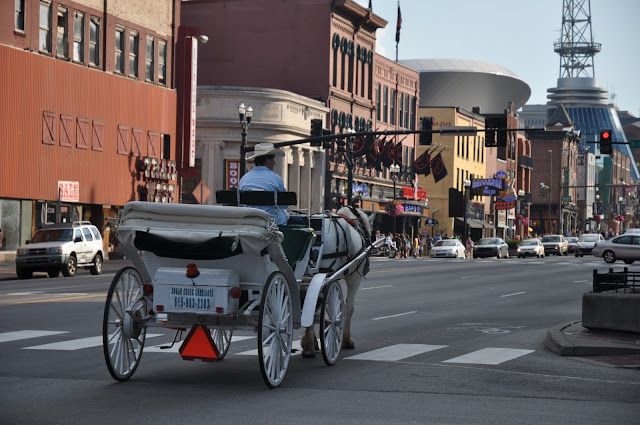 The AT&T Building (for obvious reasons aka Batman Building) is a 617 ft (188 m), 33-story skyscraper completed in August 1994, designed as an office tower capable of housing 2,000 workers. It is currently the tallest building in the state of Tennessee. 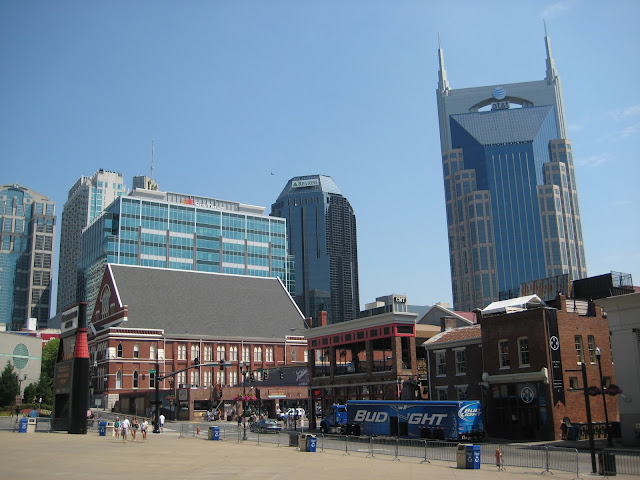 617 feet is nothing compared to the tallest towers in the U.S.,  though.

Still - looking pretty cool! The other skyscraper is called The Pinnacle. 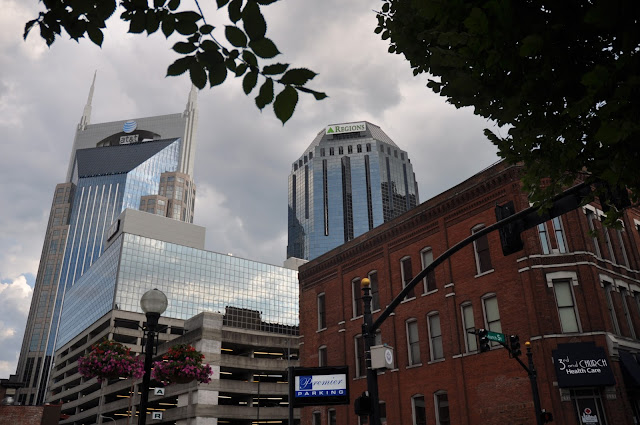 But, how I was saying: first things first. Our 4.5 year old needed to see his hockey stadium, so that's where we were headed. Were weren't the only ones, though. 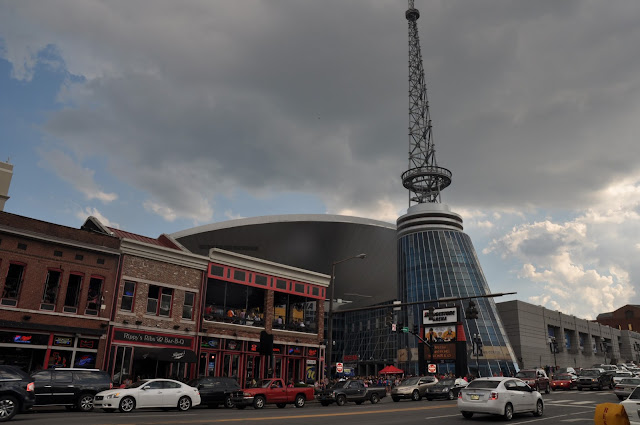 Walking down Broadway we noticed there were lots of excited, dressed up teenage girls. 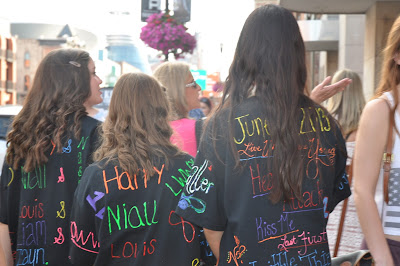 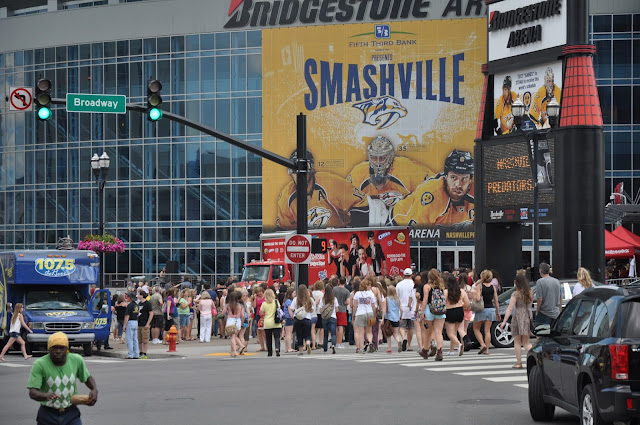 Ohmygoodness, there were more of them! Loads! When a limo pulled up, they started to scream and shriek. What the what..?

As it turned out One Direction were performing that night.

So we had to come back first thing the next day.


There was not much to be seen. The ice was defrosted and the merchandise store was closed during the summer, still Colin was excited just to be there. 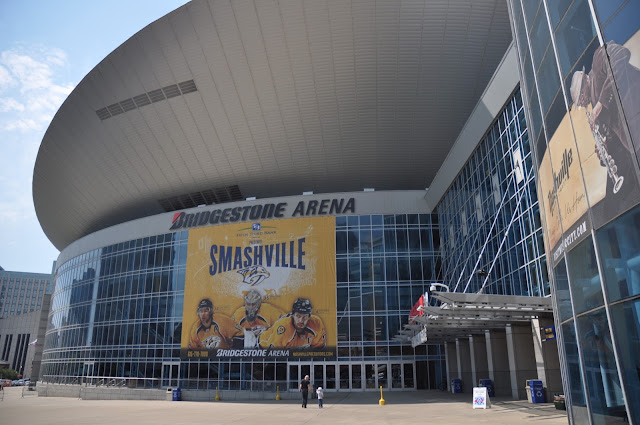 He didn't know it at the time, but a year later, he was going to have the honor to participate in a Hockey Day Camp for kids where stars like Roman Josi were talking to them about practise, eating veggies and taking naps!

Roman was born and raised in Switzerland and returns home for summer breaks.

In 2017 (at which point Josi was named captain), the Nashville Predators. made the Stanley Cup Finals for the first time in franchise history, but ultimately fell to the Pittsburgh Penguins. This season they made the Playoffs again, and so far it's looking good, they lead the series vs Colorado Avalanche. We're keeping our fingers crossed! 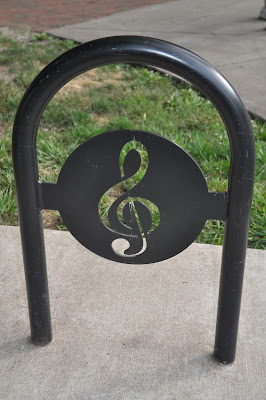 As the "Home of Country Music", Nashville has become a major music recording and production center. The Big Four record labels, as well as numerous independent labels, have offices in Nashville, mostly in the Music Row area. The iconic Historic RCA Studio B, where legends like Elvis Presley and Dolly Parton recorded hits, is open for tours. Nashville has been the headquarters of guitar company Gibson since 1984. 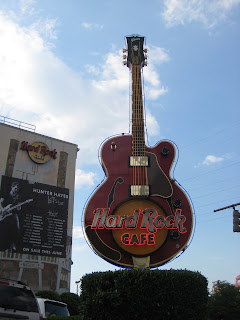 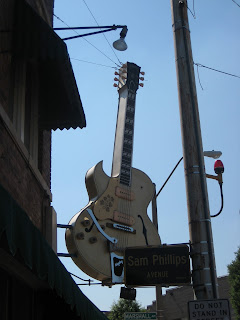 I certainly caught the music bug as soon as we arrived in the city. 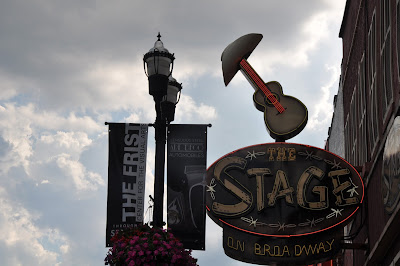 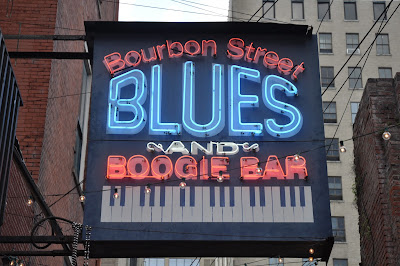 So many music clubs and honky-tonk bars can be found in downtown Nashville, particularly on Broadway, Second Avenue, and Printer's Alley. 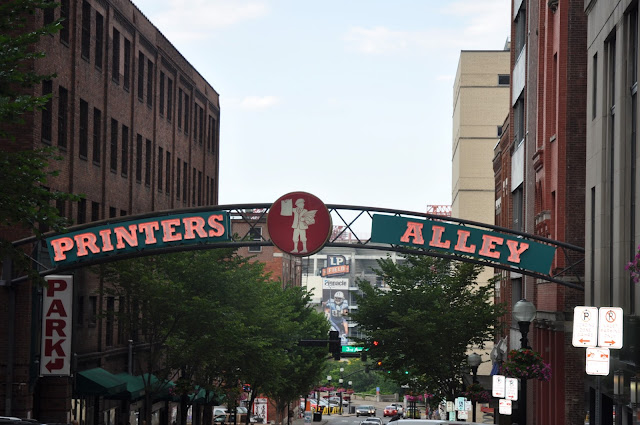 So as you're walking down one of those streets, you inevitably start humming and / or tapping your feet. Too bad if you're wearing sneakers, though ;-)

There's even the Country Music Hall of Fame which is more than a museum displaying tons of sound recordings, photographs, videos, musical instruments, clothing items, even vehicles (think Elvis Presley's Cadillac) - they let you play music yourself! 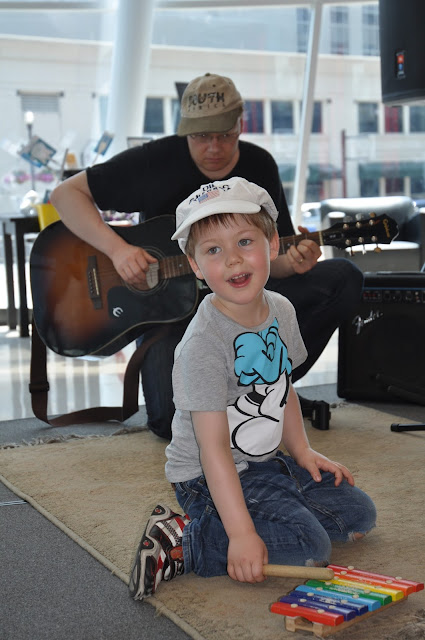 Hubby and Smurf son were jamming away :-) They did an OK job, but given the chance I'd rather listen to Connie Britton & Charles Esten aka Rayna Jaymes & Deacon Claybourne from Nashville.

I purchased season 1 for research purposes (the things you do as a blogger!), and even though the story and the characters are not super original (it's pretty obvious the producers got their inspiration from Faith Hill, Tim McGraw and Taylor Swift) I'm hooked!

No one will ever love you made me cry and hope that they are getting back together!

As I was saying, we arrived from Memphis, so this is what I want to show you as well. 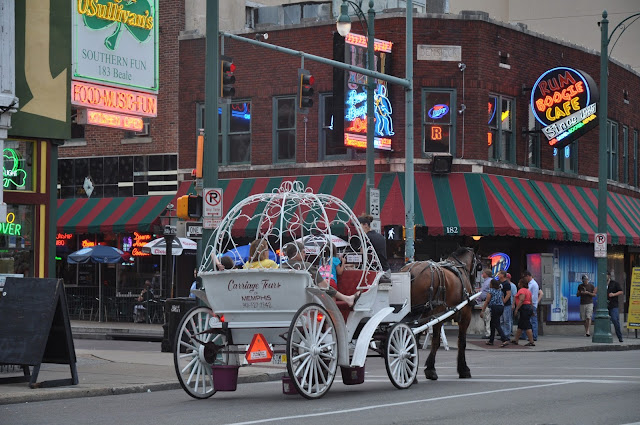 Not being prepared for a trip has is advantages. In the case of Memphis we didn't know that it repeatedly ranks among the most dangerous cities in terms of crimes - robberies and homicides - just the opposite of Irvine, CA we were talking about earlier this month.

We weren't aware of the role Memphis played in the Civil War, however we learned that Martin Luther King was assassinated in the very city in 1968. 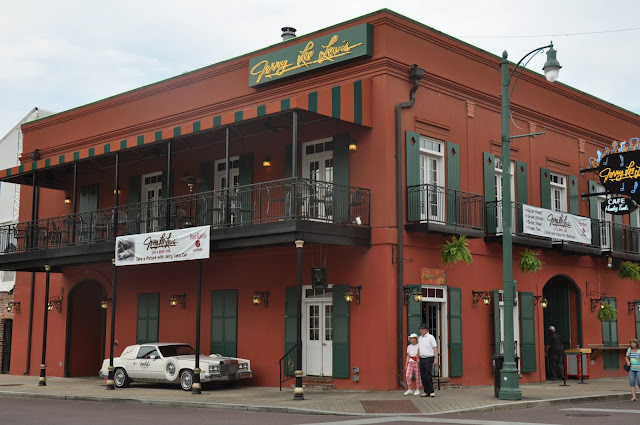 A different King spent some time in Memphis as well: 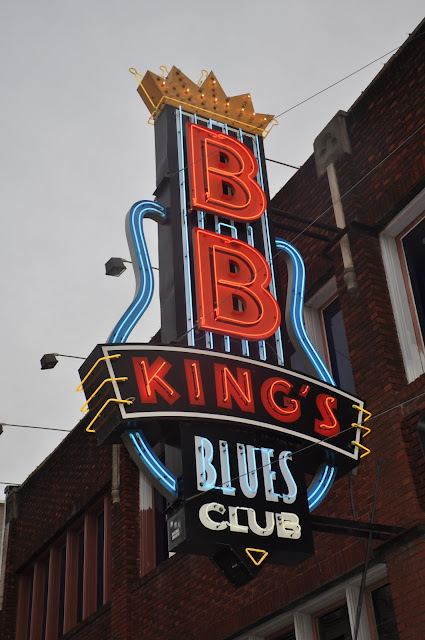 Speaking of "King", Mommy got herself a pair of Elvis shades! 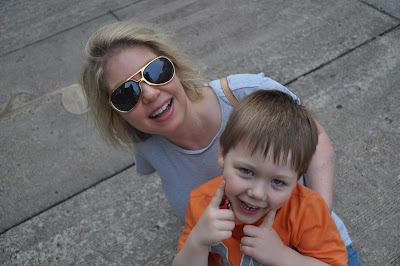 Graceland was closing soon, so we were going to check it out the next day. For now - Memphis not being a hockey town - this was Colin's place to be: FedEx Forum, home of the Memphis Grizzlies: 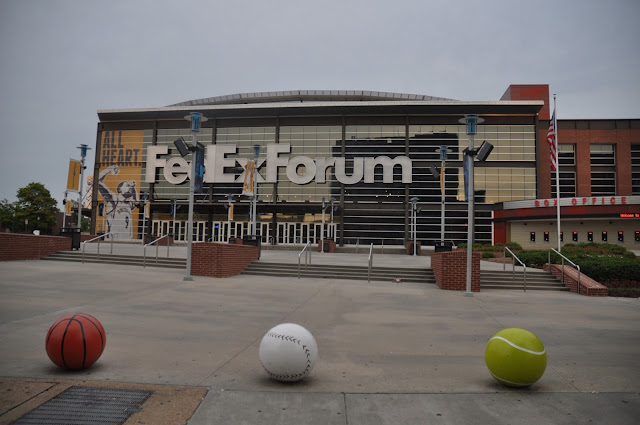 While this was my place to be: Peabody Place, home of the Memphis' Starbucks, GAP and Victoria's Secret ;-) 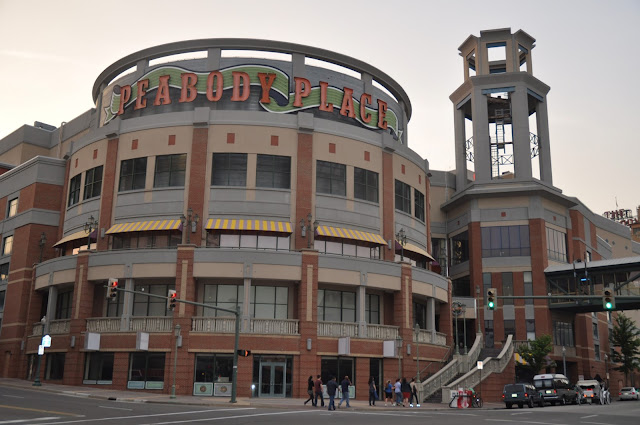 So, Graceland! You can't grow up anywhere in the world without hearing about Elvis' home. We weren't huge Elvis fans, and we didn't have great expectations of this tour, but we sure liked it a lot, and hubby downloaded Presley's 50 greatest hits the next time we had wifi reception! 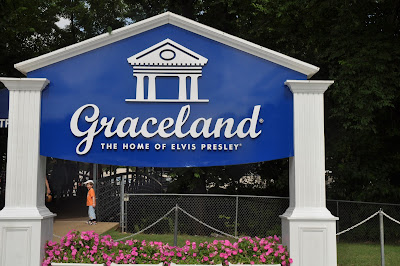 Did you know, after the White House, Elvis' mansion is the most visited house in the USA? 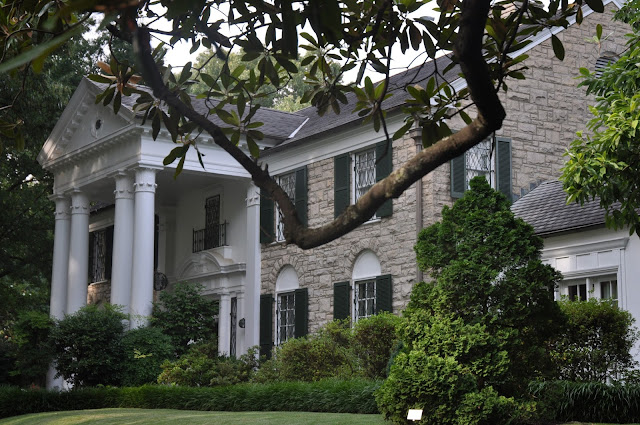 While the Presley family certainly enjoyed happy and successful times here, Graceland struck me as a sad place. 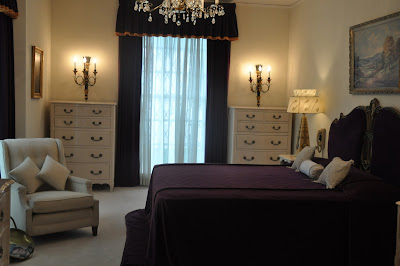 Elvis, his parents Gladys and Vernon Presley as well as his grandmother Minnie Mae Presley are buried on the property in the Meditation Garden. A memorial gravestone for his stillborn twin brother, Jesse Garon, is also at the site. 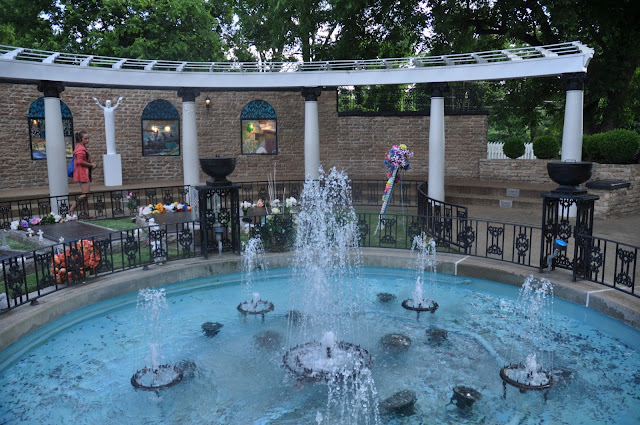 When we had planned our trip we weren't aware that we were going to cover parts of the Blues Trail leading from New Orleans to Chicago or the other way around - but that's OK. It's called you learn as you go, right? 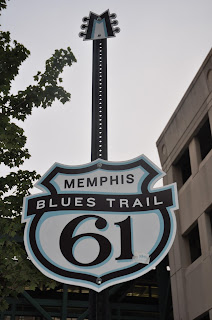 Thanks for jamming with me. Do you have a favorite Country or Blues artist? Let me know down below and check out a couple of other N posts!

I hope you'll be back tomorrow for O is for Oakland?